If you’ve seen the film Titanic, you would know how it depicted the tragedy that killed more than 1,500 passengers when the British passenger liner collided with an iceberg, and sank in the North Atlantic Ocean in April, 15, 1912. Even on the 20th anniversary of the film’s release in 1997, many are still not over Jack’s death and are still debating whether he and Rose could have both survived on that wooden door plank.

People also found out that the scene where Rose (Kate Winslet) turned down her place on the lifeboat just to be with Jack (Leonardo DiCaprio) was actually based from a real-life heartbreaking story.

In the film, there’s an old couple who died together as they hug each other in bed. The old couple’s scene was roughly based on old married couple, Ida and Isidor Straus’ story of unyielding love for each other.

Isidor, 67, was a co-owner of Macy’s and a congressman for the Democratic party. He and Ida, 63, had been married for 41 years and had six children. The two, who were both seated in first class and one of the richest passengers of the RMS Titanic, were travelling back to US after a holiday in France. 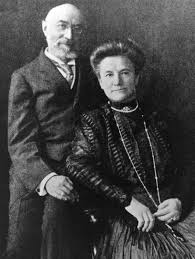 When the RMS Titanic hit the iceberg, they knew that the “unsinkable” luxury ship was rapidly going down. Ida, being a first class passenger and a woman, was immediately offered a spot on a lifeboat but refused to leave her husband behind. Although Isidor was also offered a seat on a lifeboat so he and Ida could be together, he also refused to be made an exception and go ahead before other women and children.

Ida gave her spot on the lifeboat and her fur coat to her English maid, saying she won’t be needing it anymore. According to June Hall McCash’s “A Titanic Love Story: Ida and Isidor Straus,” passengers heard Ida saying: “Isidor, my place is with you. I have lived with you. I love you, and if necessary, I shall die with you.”

The film Titanic even recreated this scene but didn’t make it in the final cut.

They were last seen on deck arm in arm and died together as the ship went down. Isidor’s body was recovered at sea but Ida’s was never found. 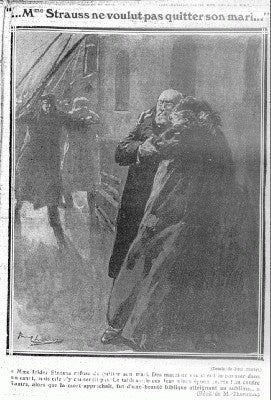 It may not be a happy ending for them but at least they died fulfilling their promise to love each other ‘til death parted them. Their hearts went on and on for each other until the very end.

via We Heart It