Potterheads are not happy with J.K. Rowling’s support in casting Johnny Depp for Fantastic Beasts 2

When news broke about the sequel of J.K. Rowling’s Fantastic Beasts series, it received mixed responses from fans. Some were thrilled, while others were unhappy. This was because of the casting of Johnny Depp as the film’s main character (Grindelwald) despite being accused of domestic abuse by his ex-wife, Amber Heard.

Her fans couldn’t quite comprehend how an outspoken activist like Rowling would approve of Depp’s casting for the film that they asked the author for an explanation.

Rowling recently broke her silence and tweeted her two-cents about the casting issue:

I'm saying what I can about the Grindelwald casting issue here:https://t.co/NDMjy542Yv

But upon releasing her statement, her fans are outraged by what she wrote. In her lengthy explanation posted via her official website, Rowling expressed her apparent support to the casting of Depp as Grindelwald:

Based on our understanding of the circumstances, the filmmakers and I are not only comfortable sticking with our original casting, but genuinely happy to have Johnny playing a major character in the movies.

As a result, her fans also expressed their extreme displeasure and disappointment with the author. Some of them even said that they would no longer watch the film.

honestly never thought i'd be disappointed in my childhood idol but here we are.

Absolutely unacceptable. You cannot claim to support women & keep an alleged domestic abuser in such a prominent role in one of the biggest franchises in Hollywood. To give him a continued voice only perpetuates & normalizes the problem within the industry. I'm so disappointed.

So basically Johnny Depp told you he didn't do it and you believed him. This is shit, JK Rowling. pic.twitter.com/r9HIFQXNVK

I am really gonna need it. The Harry Potter franchise is something so meaningful to me and the other actors are amazing. I am just sad and disappointed that they brought an abuser. I can not agree with that.

As a fan of Harry Potter, admirer of JK Rowling, and survivor of prolonged and violent domestic abuse, this statement makes me incredibly sad. It should go without saying that abusive men should not be cast in children’s movies.

This is the part that hurt me the most. No survivor wants to spend their lives dwelling on the actions of a monster. No abuser wants people to talk about their crimes. Ms Heard’s understandable desire for closure does not give the industry free reign to validate an abuser #MeToo pic.twitter.com/zLHPXXjUl0

"There will be a time when we must choose between what is easy and what is right."

I've carried this quote deep in my heart ever since I first read it. I am so sad to see that you chose what is easy. 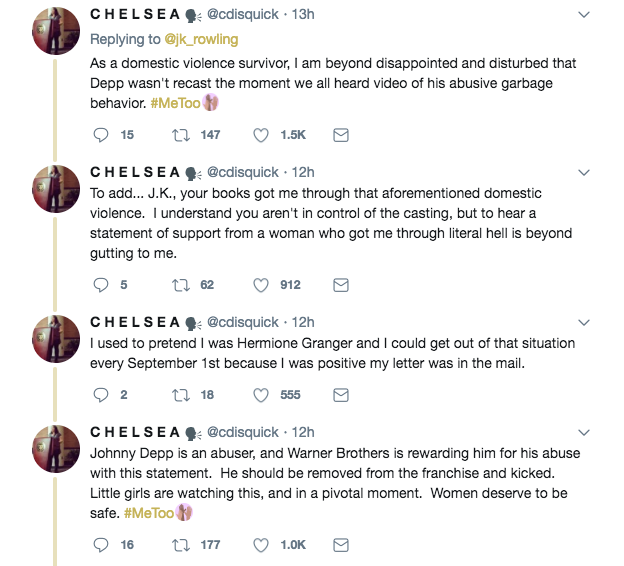 Others took the time to also explain why they do not want Depp in the film:

He's an abuser. And what's his punishment? Being part of a big movie, in a big caracter, because they keep protecting him. That's why the fans don't want him as Grindewald, we don't want abusers being protected anymore. But he, as many others, kept his lives like nothing happend

wow this is a bad take. she deserves scrutiny on adding johnny depp as a part of the HP franchise because he's an abuser & instead of facing repercussions he get paid millions bc they keep protecting him

But despite the scrutiny and criticism, some of her fans showed their undying support for her:

Thank you for talking about this. And I’m really sorry for all the abuse you’ve had to endure from ”fans”, because of it. Can’t imagine it has been easy. Sending you lots of hugs. xx

The perfect quote. No matter what decision is made, you can’t make everyone happy. I hope she followed her gut on this one and is content with herself/her decision.

Ms. Rowling faces never-ending scrutiny of every word she speaks and action she takes. I envy her success but not the incessant criticism that comes with it. I am confident she has given great thought to this and done what she believes is right.

I get the feeling there's information that Jo has, that she cannot disclose to us for reasons of privacy, which have greatly influenced her decision. I trust Jo's judgement. Some might not. That's their decision.

Rowling is aware that her choice may not be favorable for all of her fans that she concluded her statement with this:

I’ve loved writing the first two screenplays and I can’t wait for fans to see ‘The Crimes of Grindelwald’. I accept that there will be those who are not satisfied with our choice of actor in the title role. However, conscience isn’t governable by committee. Within the fictional world and outside it, we all have to do what we believe to be the right thing.