This is why we love Japan!

For the upcoming World Expo in 2025, Japan made its bid to be the next country to host the event. With the proposed theme: “Designing Future Society for Our Lives,” that seeks to focus on human lives, the expo aims to urge every individual to think about their aspirations and to encourage them to discover their full potential in order to create a sustainable society.

In support of this and to help promote Osaka, Foreign Minister of Japan, Taro Kono, decided to appoint two of your favorite characters as the new ambassadors–Hello Kitty and Pikachu!

The minister announced via his official Twitter account last November 29 saying: “I have appointed Pikachu and Hello Kitty as Ambassador to promote the City of Osaka for the 2025 Expo host city.”

I have appointed Pikachu and Hello Kitty as Ambassador to promote the City of Osaka for the 2025 Expo host city. pic.twitter.com/mCkiCl5T5j

The post gained a lot of traction–with 94K likes and 44K retweets–from users who were very thrilled by the news.

Finally we have Ambassadors I can relate to

Best thing that has happened in 2017 tbh

Some even praised the minister for making the right decision.

osaka is in good hands

Others poked fun of Pikachu and Hello Kitty. 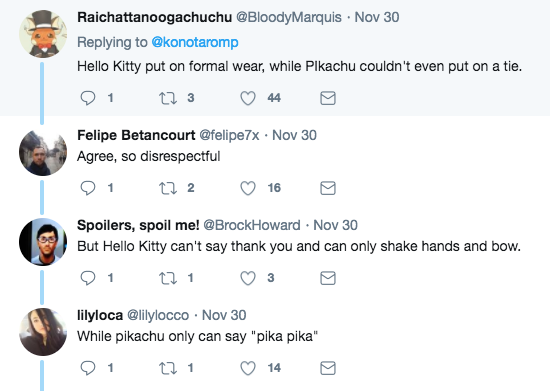 @This_is_deby @Marsfox23 This is how Pikachu started his career in politics. I hope he will be Prime Minister of Japan one day.

There were some who clamored for their favorite anime characters to be appointed as ambassadors as well.

I demand Blissey be added to the lineup. pic.twitter.com/WjkiNQtvyt

Naruko: I wanna be next. pic.twitter.com/46maZmgmp5

But sorry to tell you guys, the Foreign Minister has decided to say: “Pikachu and Hello Kitty, I choose you!”