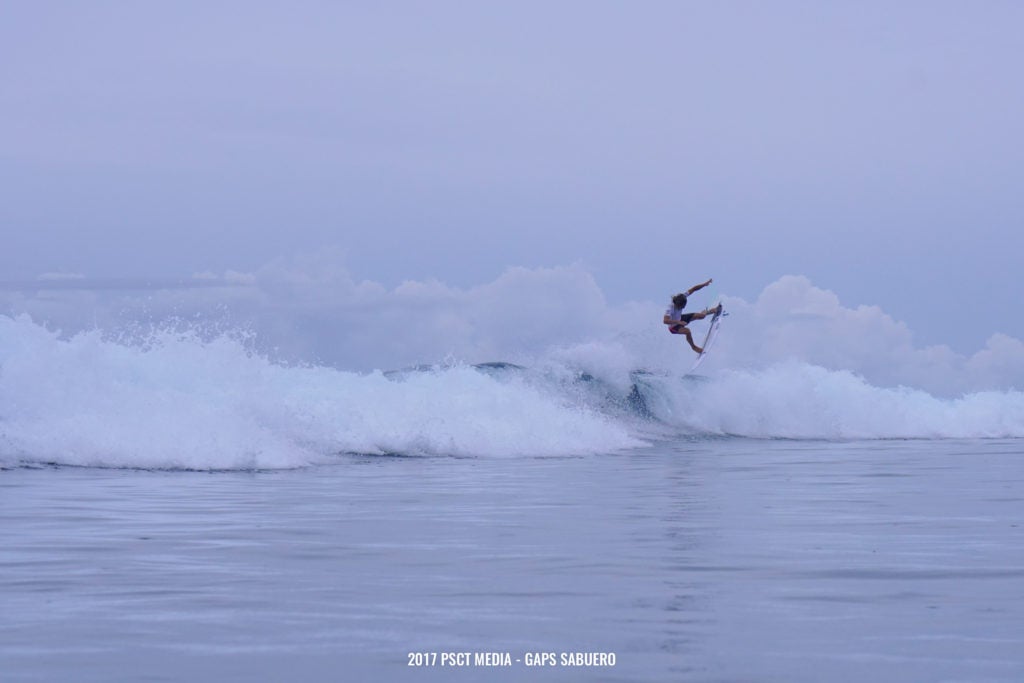 The final day of the competition started off in the morning with the Quarterfinals, where Philmar started off his campaign for the top spot on the podium in Quarterfinal 4, having a face off with local surf legend Carlito Nogalo. The horn had barely quieted after sounding the start of the heat when Philmar nabbed the first set wave and locked himself into a long, deep barrel then exited cleanly and added a roundhouse cutback and a few more turns to earn a whopping 9.0 score from the judging panel. He then prowled the lineup catching waves under Carlito’s priority and soon had Carlito needing a combination of scores to overtake him, which Carlito never did, so when the horn signaled the end of the heat, Philmar won with a score of 16.00 points (out of a possible 20) against Carlito’s 8.00 point score total.

“Maliit yung alon saka maliit yung swell kaya pag may dumating na set kailangan mo talagang kunin. Swerte din talaga na nakuha ko yun alon kasi habang nag a-announce pa si Luke ng sponsors, binabantayan ko na yun. Sakto nung nag start na, nakuha ko yung alon. Advantage talaga yung makakuha ka kaagad ng magandang alon,” (The waves were small so when a set comes, you really need to get it. I was really lucky I got that wave. I was already eyeing that one even while Luke was still announcing the sponsors so right when the heat started, I was able to get it. It’s a big advantage when you catch a good wave like that at the start of the heat.), said Philmar. 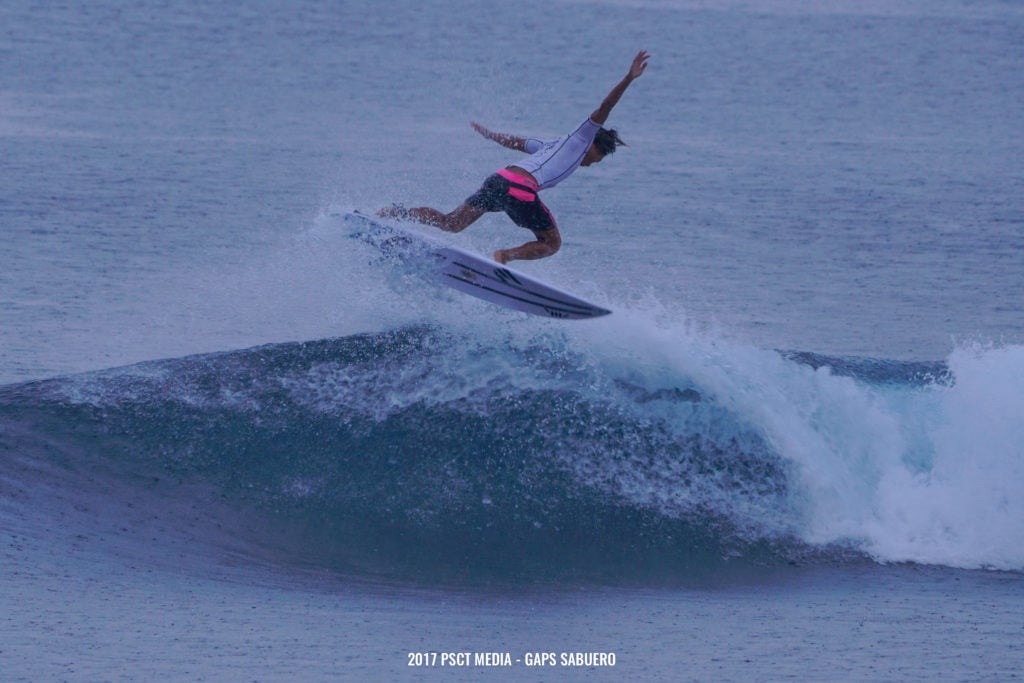 It was a battle between north and south as La Union pride Jay-R Esquivel and local favorite Eduardo Alciso put on an amazing heat, exchanging aerial after aerial, tube ride after tube ride and power snaps in between, exchanging the lead multiple times. At the 5 minute mark with Eduardo in the lead and Jay-R holding priority, Jay-R spotted a clean wave coming towards him so he took off, gained speed and then launched a 180 pop shuvit, switching his foot stance in the middle and landing cleanly. The judges rewarded Jay-R with an excellent 8.00 wave score (out of a possible 10 points) which was just enough for him to regain his lead and win the heat. 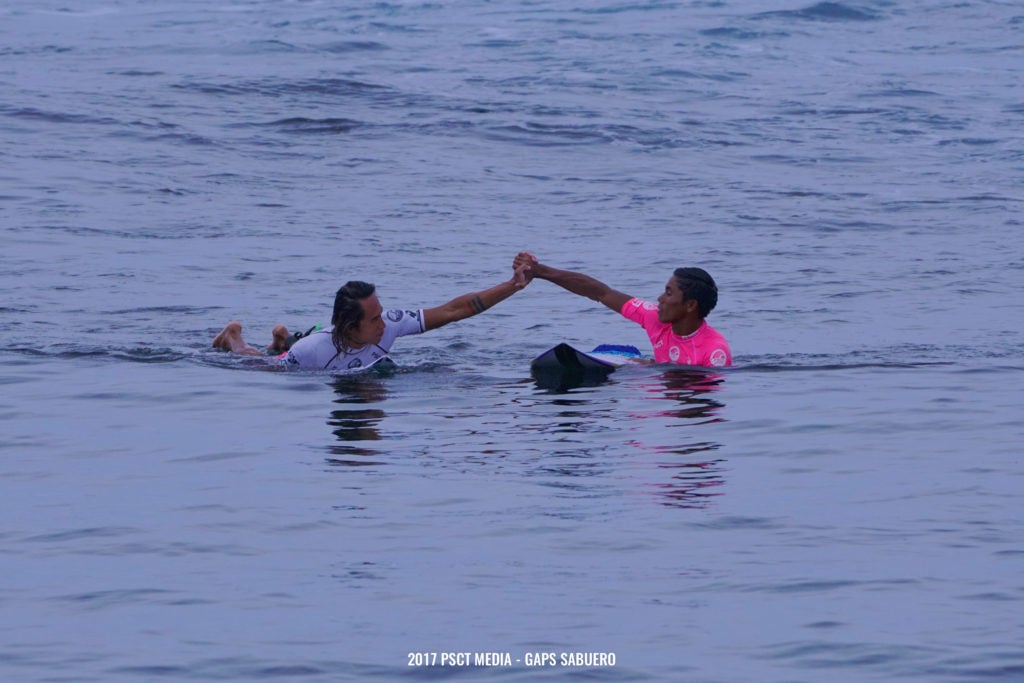 After a four-hour break, the first semifinal heat started with Piso Alcala against John Mark Tokong, followed by Jay-R Esquivel versus Philmar Alipayo. Spectators were starting to line up along the boardwalk and fill the Cloud 9 tower to witness the best Filipino surfers battle it out for the finals.

When the horn sounded the start of the first semifinal, Piso Alcala posted a massive 8.25 score after getting deeply pitted in a clean barrel, and then John Mark Tokong took the second wave, throwing snaps and roundhouse cutbacks. After regaining his priority, Piso played the waiting game against John Mark, who badly needed a 7.35 score to take the lead. But the rising tide and lack of waves worked against him, so when time ran out,  Piso won the heat by posting a total heat score of 14.00 against John Marks 12.60.

“Sobrang kinabahan ako tapos ang hirap pa ng alon. Hindi lang din ako masyadong kompyansa kasi alam ko si Marama magaling din yan. Kaya nagfocus lang ako. Enjoy lang talaga, surf with feeling lang,” (I was so nervous during my heat as the waves were difficult to catch. I didn’t want to become too confident because I know Marama is such a good surfer. So I just maintained my focus and enjoyed the surf! Just surf with feelings) said Alcala. 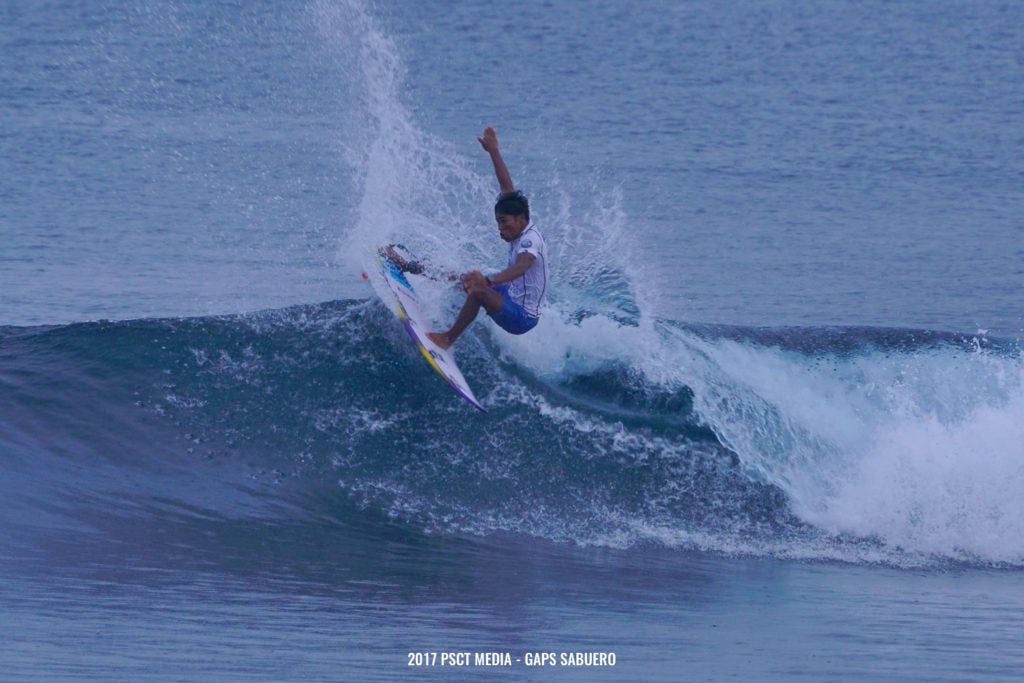 Piso Alcala and John Mark Tokong have both been winners in past national and international Siargao surfing competitions. Back in 2014, Alcala won the National surfing contest, while Tokong was still in the Junior division. In 2015, Alcala and Tokong went head-to-head during the WSL WQS Siargao International Surfing Cup and Tokong came home the winner.

The second semifinal heat saw a pitched battle of goofy footers, with Jay-R Esquivel from La Union up against Siargao’s top surfer Philmar Alipayo. Esquivel, who was also in the semifinals last year, had a good start during the heat, scoring a 5.75 in his first wave, while Philmar Alipayo, having the home court advantage, was waiting for a wave to answer back. The intensity of the heat came into focus when Philmar scored a 6.75, utilizing his backside power on the righthander to jump into the lead. Esquivel replied back with combinations of turns on his next wave, regaining his lead with less than 10 minutes left. Philmar then exploded into action with a series of hard-hitting snaps then following it up with a huge frontside 360 air. In the dying minutes of the heat, Esquivel took off and tried one of his patented 180 pop shuvits but failed to land it. Philmar won with a total score of 13.25 against Jay-R’s 12.60. 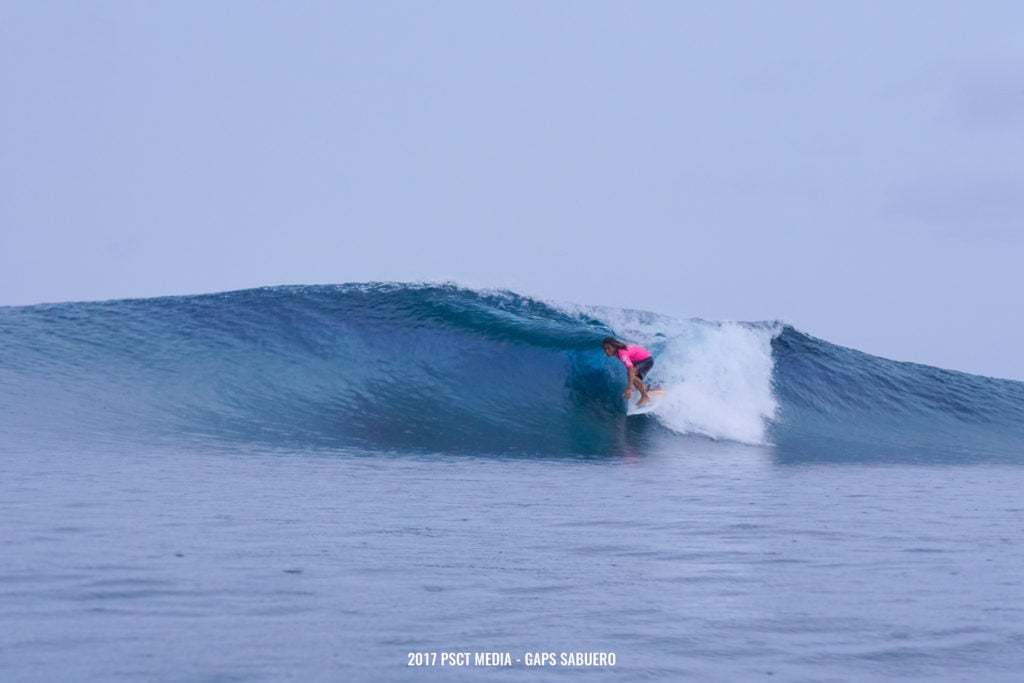 The finals went down under gloomy and drizzling afternoon skies with Piso Alcala and Philmar Alipayo, the last two surfers remaining out of 186 competitors registered for the first Philippine Surfing Championship Tour leg, gunning for the top spot on the podium, a milestone for the two best surfers in the country. Philmar started out aggressively initiating a paddle battle against Piso to jump into the lead. Piso tried to answer back but failed to complete his manuevers, so Philmar went back to work with several high flying aerials on the left hander of Cloud 9 to leave Piso struggling to catch up.  Philmar was on fire, later raising the tempo even further by landing a massive 180 pop shuvit going left, earning him with an almost perfect score of 9.35 (out of a possible 10 points), the highest single wave score of the competition, sealing his victory with a final combined heat score of 17.85 against the 13.25 held by Piso.

“Hindi ko naisip na makumpleto ko yung huling trick, tiwala lang talaga. Salamat sa lahat ng suporta, sa mga kaibigan at sa PSCT. Kita tayo sa Lanuza,” (I never thought that I would be able to complete the last trick but I just trusted that I would. Thank you to all my supporters, my friends and PSCT. See you next in Lanuza.) said Philmar.