23rd Edition of Fête de la Musique in the Philippines 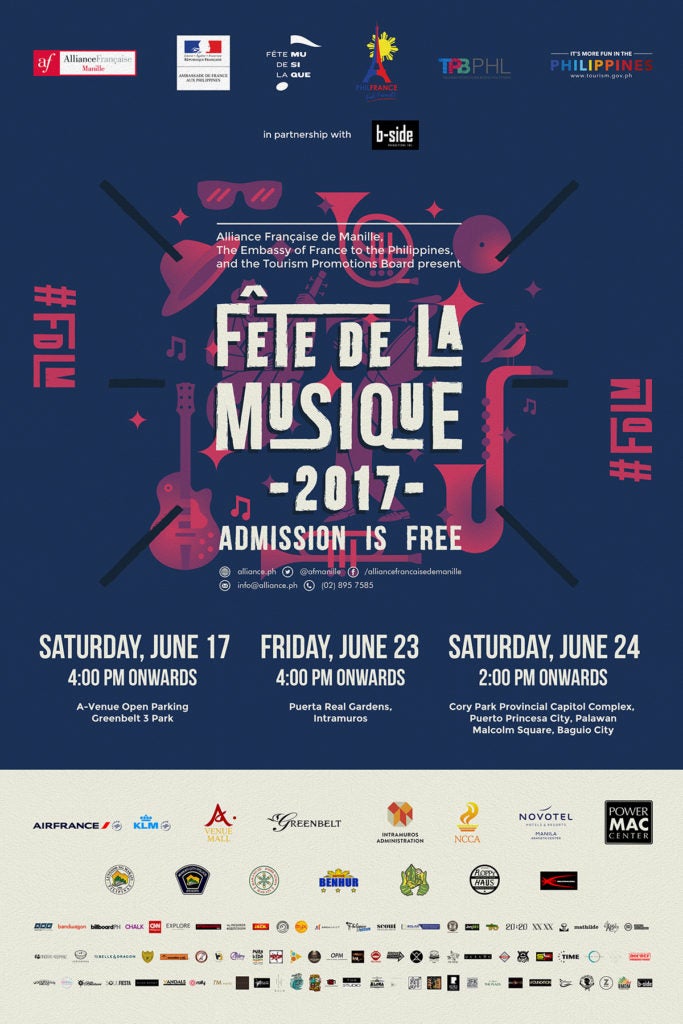 This year, Fête de la Musique in Metro Manila had garnered a monumental success in terms of participation of artists, stages and audience compare to its previous editions. The 3-day, free-for-all event (June 17, 23 and 24) was blessed with a surprisingly good weather which resulted to a more lively outdoor atmosphere.

On Thursday, June 15, 2017, Novotel Manila Araneta Center hosted for the second time the Fête de la Musique’s kick-off party. The event was attended by H.E. Thierry Mathou, the French Ambassador along with all the other partners of the event.

We had invited the French electronic band, Encore!to perform and open the celebration at the hotel. The night was filled with French food and wine which was enjoyed by all the guests.

Even with the cancellation of the A Venue and Greenbelt Main stages, the celebration did not from happening on that momentous Saturday.

Fête de la Musique was celebrated all over Makati City last June 17 (Saturday) with 32 pocket stages that catered to each music genre. Original Philippine Music (OPM) enthusiasts flocked these venues and moved from one stage to another. This musical crusade has been a long tradition of Fête in Makati, which goes to show that the city has a vibrant music and night scene.

The French Band Encore!did their encore performance at the Circus stage of XX XX. The whole city had become a major destination on that night as celebrations were held in every corner of the city lasting until the next morning.

As part of Fête’s continuing tradition, the celebration did not stop in Makati.

For its 4th year, Intramuros hosted Fête inside its walls and the success was overwhelming. Puerta Real Gardens was packed with students, young professionals and tourists- all to experience the music and the old world charm of Intramuros. This year, we had reached a new record of audience participation in Intramuros, many thanks to all music enthusiasts who supported Fête.

The participating bands were exceptional with the likes of Jensen & the Flips, Brass Pas PasPasPasPas, Autotelic, Sud, Outerhope, AngBandang Shirley, Ransom Collective among others.

After Metro Manila, the party was still not over as for the first time in it’s existence in the country, Fête de la Musique had its stages in two of the Philippines’ most popular tourist destinations.

In Puerta Princesa, Palawan, the main stage was held at the Cory Park Provincial Capitol Complex, with two other pocket venues organized as well, one in the city and the other in El Nido.

While in Baguio, the celebration was held at the Malcolm Square. The city council had shown its strong support not only through partnering with the Baguio organizers in mounting the event but it also made a city resolution declaring every 21st day of June the World Music Day (or Fête de La Musique) in Baguio.

Now that the 23rd Edition of Fête de la Musique has come to its conclusion, Alliance Française de Manille and the Embassy of France to the Philippines wish to thank the following for contributing to its phenomenal response in the Philippines:

To all the musicians, bands and their technical team, thank you for continuously supporting Fête. Your talent and artistry are the center of the celebration, and each year during Fête, we witness the solidarity among the Filipinos in the music genre.

To all the pocket stages and their production teams, thank you for a being part of the whole scheme of Fête de la Musique. Each stage has contributed on the event’s prestige in the Philippines.

To all our media partners, we are grateful for all your efforts in helping us disseminate and promote the event so that it would reach to everyone.

To the general public, we are grateful for your presence in all our stages and we are committed in giving you better performances and events in the succeeding editions.

Lastly, the 23rdEdition of Fête would not be realized without the partnership of the Tourism Promotions Board, BSide Productions along with our other stakeholders, the National Commission for Culture and the Arts, Intramuros Administration, Novotel Manila Araneta Center, Air France KLM and Power Mac Center. AFM and the French Embassy are honored to be working with you, and we thank you for all your efforts!

The Geeks shall inherit the earth in ‘Fantastic Faire’