Remember the place where Bok Joo and her “swag” friends always hangout? We now have a version of it here in PH!

If you’re one of those who are so hooked into South Korean dramas or what most people would refer to as “kinain na ng sistema,” you’ve probably watched or heard about “Weightliftng Fairy Kim Bok Joo” (WFKBJ).

Starring real-life couple Lee Sung Kyung and Nam Joo Hyuk, WFKBJ made a lot of K-drama fans swoon with kilig and inspired some to ask their crush the same question: “Do you like Messi?”

Many Pinoys got hooked to WFKBJ because of its kilig and the feel-good story, and K-drama fan Kate Tadifa’s love for Bok Joo made her decide to open up a WFKBJ-themed restaurant, Bok Chicken LU. Inspired by the restaurant of Bok Joo’s father in the series “Bok Chicken,” Bok Chicken LU offers a variation of Korean food in their menu. 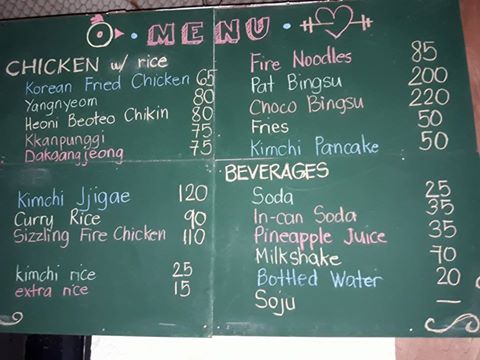 Kate told InqPOP! that she loves Bok Joo and watching the K-drama used to help relieve her stress after work. Her love for cooking, K-drama, and Korean food were what made her think of putting up Bok Chicken LU.

“I’m very fond of cooking since I was in high school. And when I went to Manila to work, my housemates (they are my siblings), are very fond of eating korean food. And that’s the start of [the] idea [for Bok Chicken LU],” Kate shared.

Even if the restaurant is located in La Union, some people would travel from far places just to experience eating at Bok Chicken LU. According to Kate, Yangnyeom Chicken (Seasoned fried chicken) and Heoni Beoteo Chikin (Honey butter fried chicken) are their best sellers and customers would leave the restaurant feeling satisfied. They also sell the sausages that Bok Joo and her friends love in the series.

“They find the items cheap and yummy… Of course, I always feel grateful and happy whenever we satisfy their cravings,” shared Kate. She also explained that she added “LU” which means “La Union” to Bok Chicken as they intend to branch out someday if the business continues to do well.

Here are some of the stuffs we would like to add on our menu. SOON.Fish cakeKimchi jjigaeKorean noodle soupHope we…

Now you don’t have to go to South Korea to taste Bok Joo’s chicken. You and your “swag” friends can check out Bok Chicken LU at Salanga Bldg., Mabini street, Catbangen, San Fernando, La Union.