Malasimbo: Homage to the best of Philippine culture

Picture it: after months on end of working in the crowded and polluted Metro, you travel for hours by bus and by boat to the lush mountains and clear waters of Puerto Galera. For three days, you enjoy the company of good friends and meet interesting strangers as you listen to talented musicians, take in the striking view, and relax underneath the trees. That is the Malasimbo Festival experience.

If it sounds a bit too romanticized, it’s because one can’t help but fall in love with the festival once you’ve had some of that “Malasimbo Magic”, as some frequent attendees have called it. For these people, Malasimbo is a yearly pilgrimage to one of the most beautiful places in the country to celebrate the best of what the Philippines has to offer: music, arts, the cultural heritage of our indigenous peoples, and the breathtaking beauty of the land. 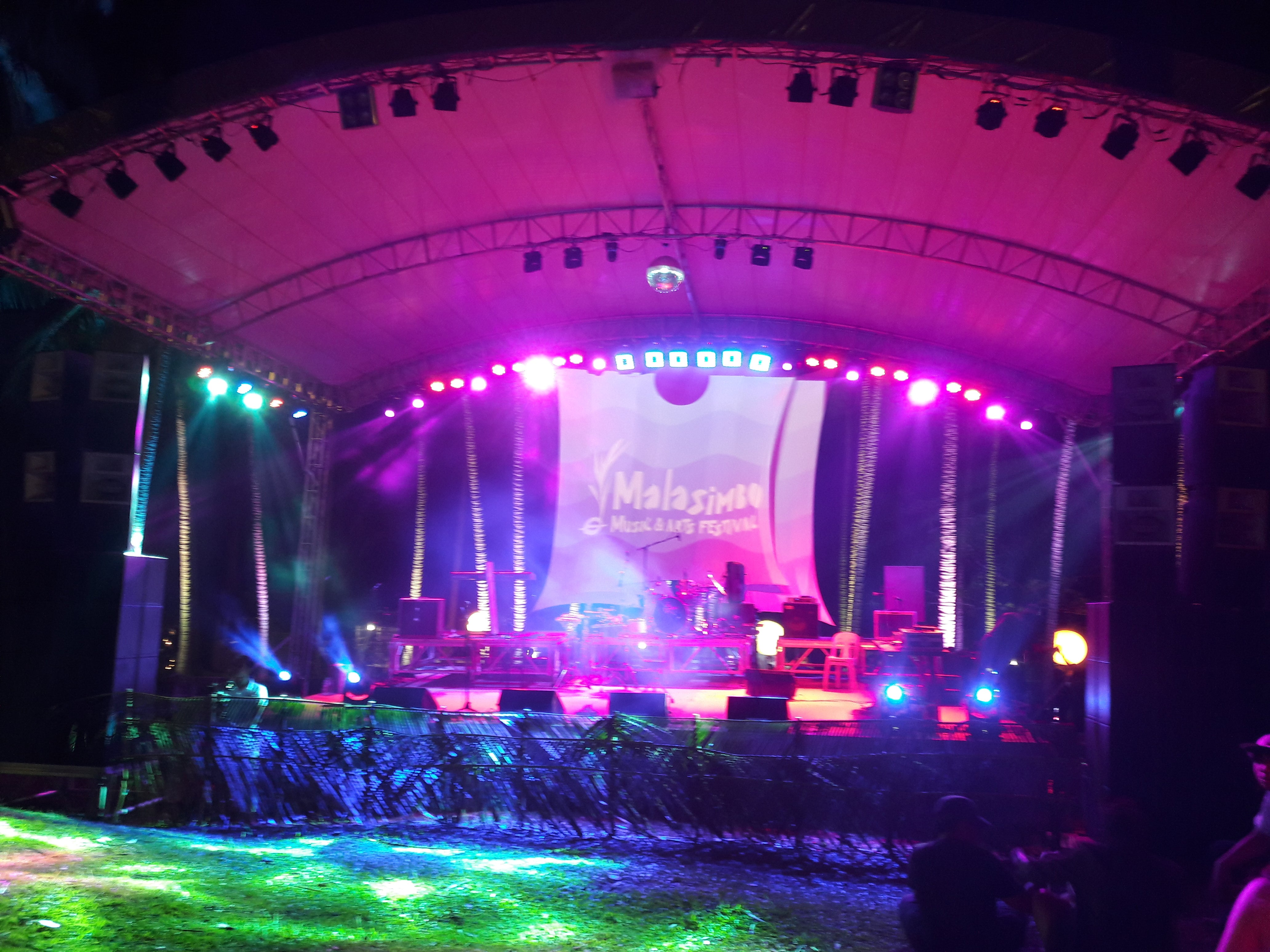 The Malasimbo Arts and Music Festival held last March 10-12, 2017 is a yearly project organized by Volume Unit Entertainment (VUE)  and hosted by the D’Aboville Foundation and Demo Farm, Inc. D’Aboville Foundation is a French-Filipino non-profit and non-government organization that works with and for the indigenous Mangyans, the environment, and the eco-cultural tourism of Mindoro. It was established in 2004 by husband and wife Hubert and Ara D’Aboville, both of whom actively participate in and were very visible during the festival.

Now on its 7th year, the idea for Malasimbo came from Miro Grgic, head of VUE and now son-in-law of the D’Abovilles. Foundation President Hubert D’Aboville tells the story:

“In 2010, we dreamt about it. It was Miro who told me, ‘I would like to make a music festival here in Puerto Galera’.”

They approached the city mayor to ask for a place in Puerto Galera where they can hold the festival and invite one to two thousand people. But after two months, the mayor was unable to name a location and the project almost died. The big Aha! Moment came one day as Hubert was taking his daily walk around their estate.

“While I was walking, standing just above here, I turned my back and I say, ‘Wow, this looks like an amphitheater! Why do I go and look far when it’s right under my nose?’”

Once they have decided to have the festival in their own land in Puerto Galera, they began working on putting the event together. And after just four months, the first Malasimbo Festival was held on February 18, 2011. Malasimbo is very much a family event for the D’Abovilles, with everyone involved in the preparations and development each year.

“From the very beginning when we created the Malasimbo Festival, we had four pillars that guided us: music, art, indigenous people, and environment,” Ara D’Aboville, wife of Hubert D’Aboville and a board member of the Foundation, said. The musicians who play during the 3-day festivity are all chosen and invited by Miro Grgic. Olivia D’Aboville, the daughter of Hubert and Ara and a well-known visual artist here in the country, curates the art installations spread out all over the field. And the advocacy for the Mangyans of Mindoro and the environment which are highlighted in the festival through a series of talks is a passion for both Hubert and Ara D’Aboville. 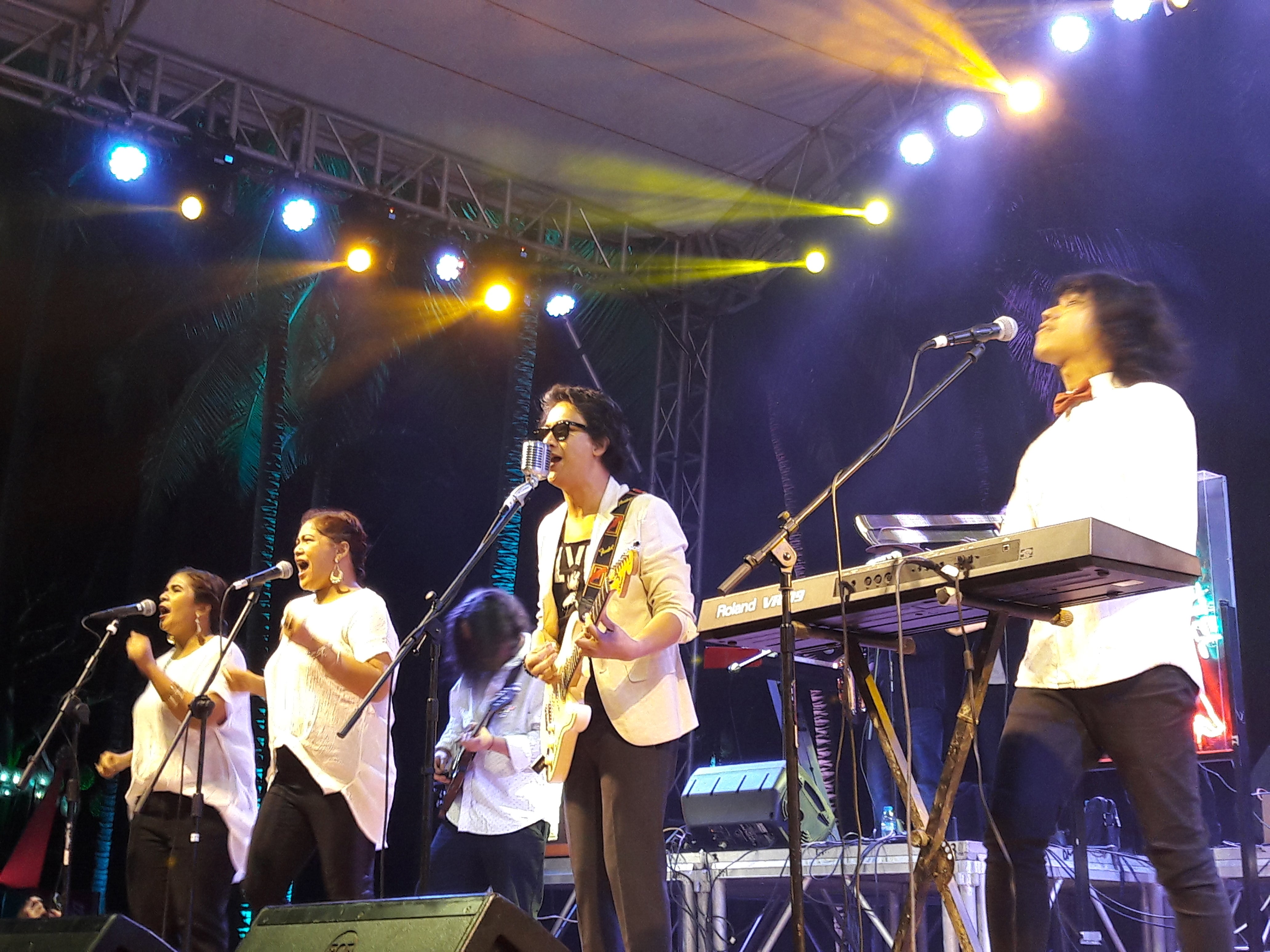 Soul band Apartel performed on the first night of the festival. PAULINE REYES/INQUIRER.net

The music in Malasimbo ranges from Funk, Electronic, Soul, Jazz, Reggae, Ethnic, and even Hip-hop. Most of the acts are local performers, making the festival a great avenue for discovering new Pinoy artists to listen to. But Miro also includes at least one international act for each night’s lineup. When asked about how he chooses the performers, he mused:

This year’s lineup featured artists like Apartel, Curtismith, Kawangis ng Tribu, Skarm, RH Xanders, and June Marieezy. 9 artists performed each night with Miro playing his music during intermissions as well. Like other similar festivals around the world, music is the major crowd drawer for Malasimbo.

“I think what makes it different (from other festivals) is that it’s in a very unique location… You’re meant to separate yourself from the city madness when you come here,” Miro said. 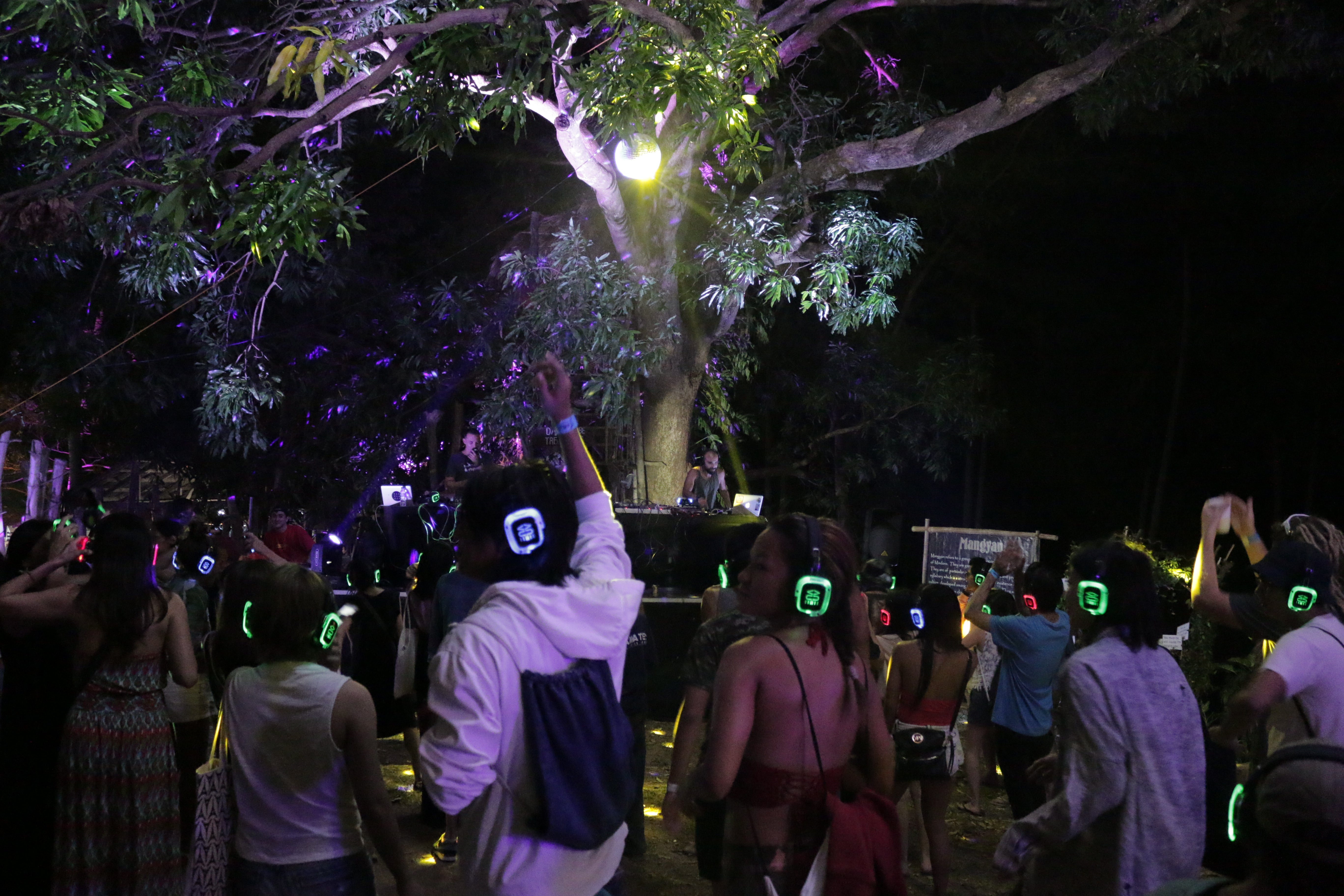 Aside from the main stage, there was also a silent disco where guests enjoyed music by DJs like Crwn, Similar Objects, Mark Zero, and Safi. The art installations featured in this year’s festival spoke volumes about the environment. Most works used natural materials like twigs and rocks as well as some recycled materials. What’s most striking about the different pieces this year is how organic it all looks; how each piece seems so well incorporated into the location that it feels like they are really a part of the natural landscape. Giant dandelions made from recycled plastic bottles, beetles made from coconut husks and twigs attached to the trees as if they are climbing up, enormous luminous lanterns whose shapes remind one of larval creatures- all these artworks, although eye-catching in their own rights, seem to highlight the beauty of their surroundings more than they take attention from it. Visual artists featured in Malasimbo this year include Agnes Arellano, Olivia D’Aboville, Grace Katigbak, and Venus Mar, among others. 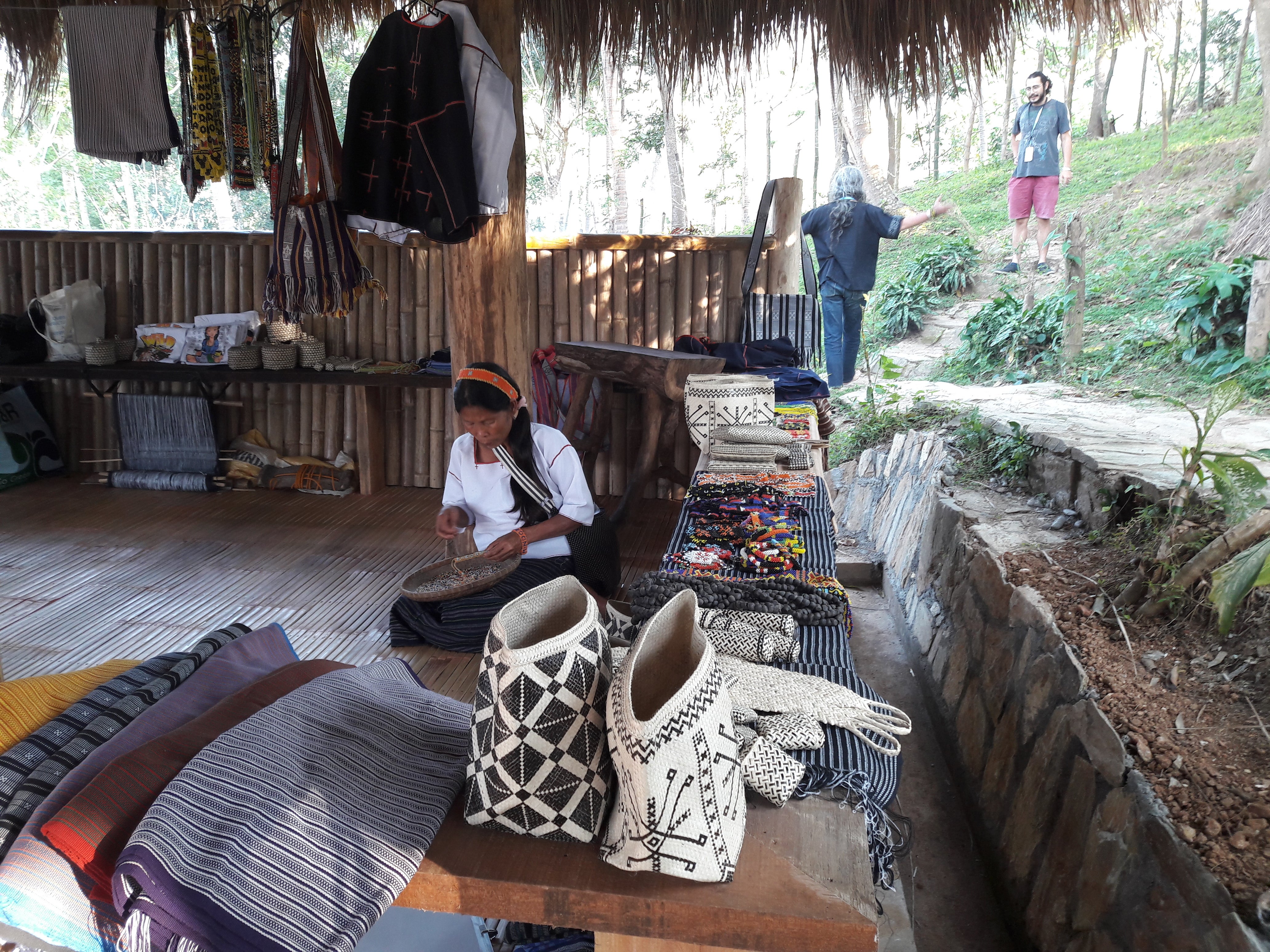 A woman from the Hanunuo Mangyan tribe works on a beaded pen holder. PAULINE REYES/ INQUIRER.net

Each day at the Malasimbo Festival begins with a series of talks held at the Mangyan village built by the D’Abovilles in their estate. These talks are mostly about environmental protection and about the heritage of the two Mangyan tribes the Foundation has managed to establish contact with.

“We work very closely with the council of elders of the Mangyan tribes. These people want to be respected for who they are and what they believe… which are not necessarily the same as ours.” Hubert D’Aboville stated.

D’Aboville Foundation has made a commitment to the preservation of the Mangyan heritage. Eping Mayot, who was the Foundation’s first Hanunuo Mangyan scholar , is now working to protect their culture by teaching the youth of her people Surat Mangyan (the Pre-Hispanic syllabic Mangyan script) and Ambahan (the poetry of their tribe, which has similarities to the Japanese Haiku). The guests were able to learn a little about these traditions as well through the talks and workshops conducted at Malasimbo.

“One thing so amazing (about the Mangyans) is that they are so proud of their culture. In fact, they are very possessive and very protective of their heritage,” Ara D’Aboville said.

Aside from working to help preserve the Mangyan culture, the Foundation is also working to improve their means of living. Through their partnership with Water with Blessings, a non-government organization that distributes water filters to far-flung communities, they have given one water filter for every four families in the Mangyan settlements. Through this, the Mangyans can have access to safe drinking water. There was also a boutique during the festival where guests can purchase products like bags, weaves, and bracelets made by the Mangyans to help with their livelihood. 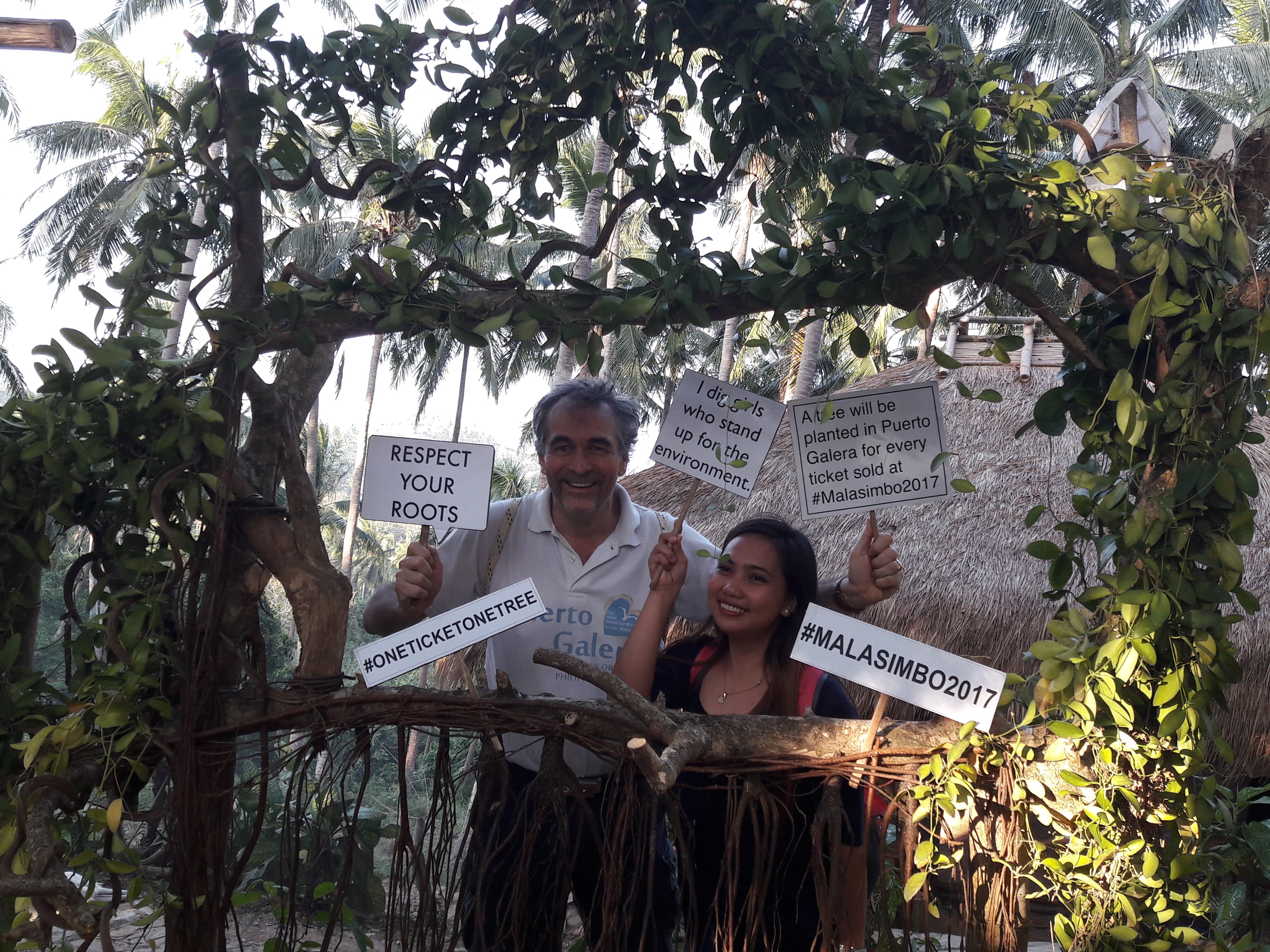 Malasimbo has a very important message for its guests: environmental preservation. Hubert D’Aboville spoke very passionately about the importance of working towards a more sustainable and eco-friendly way of living:

“If you want to protect and make this world livable, the world has to be livable for all creatures,” he said.

One of the goals of Malasimbo is to raise awareness about the issues surrounding our planet and to get more people involved in their advocacy to preserve it. In one of the talks during the festival given by Sec. Neric Acosta, who authored laws like the Clean Air Act, Clean Water Act, and the Biodiversity Protection Act during his time in the House of Representatives, there was one point made that surely left a mark on the guests. It was that nature does not need people, but people need nature to survive.

“It is very important to be able to share the planet with each and everyone. We have to learn how to coexist vis-à-vis the environment… The problem in the world today is that it has developed into a world where what you buy makes you who you are.” Hubert stated.

Although it is hard to imagine that the earth is deteriorating at a rapid rate and that we are in the midst of another era of mass extinction while you are cocooned in the rich mountains of Puerto Galera, it really is happening around the world. We are losing species at an alarming rate day to day. And although extinction is a natural process of evolution, the fact remains that human beings have contributed greatly to the untimely demise of other creatures because of how we’ve been treating Earth. Lately we’ve seen a lot of films about finding another planet to live in like Interstellar and Passengers- and if that doesn’t speak about our collective anxiety and the foreboding about what’s to come if there are no drastic changes in our ways of living, then it’s hard to imagine what will.

D’Aboville Foundation is working to promote awareness about environmental issues in Mindoro through their various projects like the Malasimbo Festival. Hubert D’Aboville stressed the importance of education in this advocacy:

“One of the things we want to do here is to invite kids from the schools of Puerto Galera for seminars (about environmental preservation) … I trust that kids between 6 and 12 years old are very flexible and are very much capable of understanding. And as they say, they will teach their parents.”

These four pillars make Malasimbo a truly unique festival that seeks to get people involved in preserving life on this planet as much as they enjoy the performances each night. But the seriousness of the issues does not dampen the joyous spirit of the event because it celebrates what we have- our heritage, our planet- and only asks that we respect it enough to care about it. The Malasimbo Music and Arts Festival is a remarkable homage to Philippine culture; it is an event that people who have had the good fortune of witnessing won’t likely forget.

Check out the video from our trip: