#LoveThrowback2 The Repeat set on May 27 at PICC

The overwhelming success of the recent Valentine concert #LoveThrowback2 proves that OPM is very much alive and you can never go wrong with timeless songs that has become the soundtrack of most Filipino’s love story. 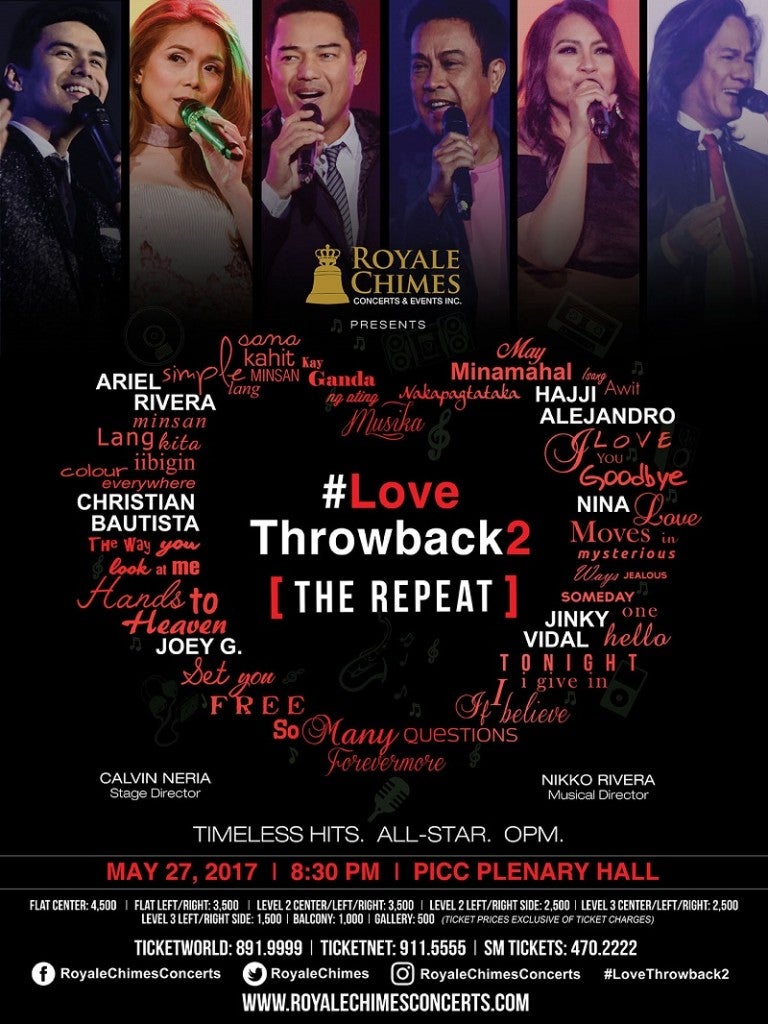 If you missed the show, mark your calendar when it goes on stage once more on May 27, 8:30 PM at the Philippine International Convention Center (PICC) Plenary Hall. #LoveThrowback2 The Repeat stars OPM royalties Ariel Rivera, Christian Bautista, Joey G., Jinky Vidal, Nina and Hajji Alejandro, a powerhouse line-up that represents different genres in the music and concert scene.

Who wouldn’t want to listen to “Sana Kahit Minsan” by Ariel, “The Way You Look At Me” by Christian, “Forevermore” by Joey, “So Slow” by Jinky, “Someday” by Nina and “May Minamahal” by Hajji, and more of their hit songs?

The show draws a mix of audience from the so-called millenials to the young at heart. All of them share the same emotions and reactions when they hear their favorite songs performed by the featured performers. They also laugh and nod their heads when they read the “hugot” lines after each song, a part of the show which is not to be missed as well.

The insistent public demand for a repeat of #LoveThrowback2 also shows that this kind of concert is not only meant to be watched on Valentine’s Day. It can be seen all over again at any time as it talks about a universal feeling that everyone at some point in their lives has lost, accepted and given another chance.

#LoveThrowback2 The Repeat is a production of Royale Chimes Concerts and Events Inc. Tickets are available at SM Tickets, Ticketnet and Ticketworld outlets.

Fall in Love the OPM Way this Valentine’s

#LoveThrowback2, a must see concert on Valentines day