1. The idea of being the “second gender”

Up until now, some women are still being considered as second to men — getting second best opportunities, lesser recognition, and unequal treatment and compensation compared to men. Apparently, despite all the revolutionary accomplishments women have contributed throughout the century, sometimes having balls weigh more than a woman’s brain and talents.

2. People trying to shut them down just because they are “women”

Women are still stereotyped as “weak” and would still often hear tasteless comments like: “Kaya mo ba? E babae ka.” (Can you do it? You’re a woman though.) It’s appalling to think that sometimes women are still doubted for their abilities just because their gender.

A lot of people think that when a woman is promoting gender equality, she’s a feminist who just uplifts women’s rights above men. But “real” feminism disapproves of matriarchy as much as it scorns patriarchy. Gender equality is a societal issue that requires men and women working together for equal rights, pay, opportunities, and privileges for all sexes.

4. “Feminism is about hating men”

One of the common misconceptions about feminism that feminists are trying to set straight, is the idea that feminism is about hating and bashing men — where feminism and misandry are often mistaken as the same thing. Feminism is the advocacy of women’s rights that promotes equality among all sexes and is open for both men and women who support equal rights.

5. The marriage of misogyny and sexism

When a man thinks that he’s superior to women, that’s when misogyny and sexism comes in. Or just simply, when a man thinks that his pair of balls and penis is better than a vagina that pushes out a baby into this world, that’s when misogyny and sexism comes in. Every day, a woman is being told who and what she can be, what her limits are, and what she’s capable of. But every day, she shows the world that she is a woman who can be whatever and whoever the hell she wants to be.

Not a day goes by when a woman would walk down a street without getting catcalled. What’s worse is some men think it’s a “compliment” and women should be glad and grateful for it. But catcalling, even for both genders, is a form of street harassment that makes women, in particular, feel unsafe whenever a man acknowledges them in lustful ways.

And for the record, catcalling could get catcallers jail time in cities like Quezon City and there’s “An Act Defining Gender-Based Street and Public Spaces Harassment” filed by Sen. Risa Hontiveros in the Senate.

7. “Dad bods” are normal for single guys but “mom bods” for single women are “fat-shamed”

While having a beer belly or a “dad bod” for single men is considered okay and “normal,” a woman who has “bilbil” or a belly fat is shamed for it especially when she’s not even pregnant. Women constantly experience body-shaming not just from men, but from other women as well.

8. It’s either you’re wearing too much makeup or you definitely need some

In a place where people’s perception of beauty is highly influenced by the standards set by society, a woman will be called out for conforming to these beauty standards or will be shamed for not passing them. When a woman wears too much makeup, people would call her out for it and promote “natural beauty.” But when she bares her “no makeup face,” people would say she looks “tired,” bash her for it, or call her “ugly.”

“Slut-shaming” or being called a “slut” is just one of the many things that people brand or associate women with. Slut-shaming is a form of sexism as it condemns girls and women for their sexual behavior yet congratulates and applauds men for the exact same thing — proving the double standard: Boys will be boys, and girls will be sluts.

Women are also slut-shamed for the way they dress and behave in public. It’s like a woman’s morality is measured by how short her shorts are or how low her neckline is. “Bakit ‘di ka na lang kaya maghubad?” (“Why don’t you just get naked instead?”) What’s even worse in slut-shaming is that sometimes, it progresses into “victim-blaming” — justifying serious cases like rape for wearing provocative or revealing clothes like it gives the perpetrator the right to violate someone.

When people shame the victims just because they were wearing something that (to them) screams they were “asking for it,” they promote rape culture. When people justify rape as a joke, support people who are rapists, ignore people who promotes rape and not educate them properly, and in any way, think lightly of rape — they all promote rape culture.

Because no one would ever want to be raped, nothing can ever justify rape as a joke, and no one should mindlessly say anything about rape without proper knowledge about it and its consequences to its victims.

12. The idea that a woman’s brain resides in her uterus 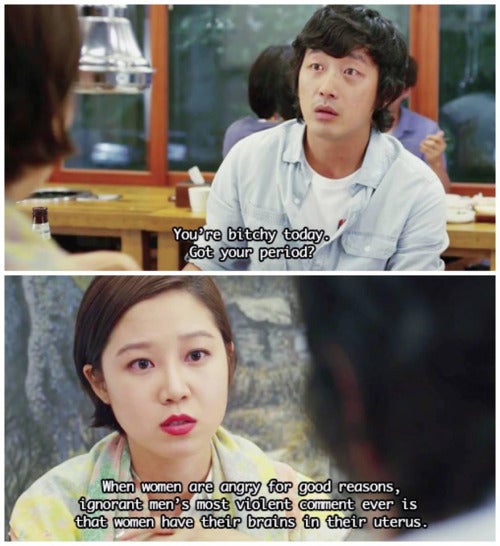 One of the things women hate hearing the most is when someone (especially men) attribute their legitimate feelings and logical behavior to their menstrual period. Yes, a woman’s sudden agitation may be associated sometimes to PMSing (Premenstrual Syndrome), but it doesn’t mean it’s the only reason every time a woman gets angry.

A woman or a transwoman, deserves the rights, privileges, opportunities, and respect equal to every gender. Being a transwoman doesn’t make her less of a woman as she doesn’t need to have a uterus to be a woman. Transwomen or transgenders in general, experience discrimination from both the male and female population and are deprived of the rights they deserve for being a human equal to everyone.

14. A woman’s body is her own business and not anybody else’s

Women having the rights and control over their health decisions is still a debatable issue for some. Using birth control methods are often frowned upon as it contradicts the teachings of certain religions and questions “morality” for preventing life.

15. When women are assertive, they’re a “bitch”

One of the double standards that women often encounter, is that when a man is assertive, he’s positively perceived as a “boss” yet when a woman is strong and assertive, she’s branded as a “bitch.” Apparently, for some, there’s still the idea that women should be generally feminine or “mahinhin” and their aggressiveness or assertiveness automatically makes them a bitch. One might ask, “do we even have a male term for ‘bitch?”

Well, if being assertive, aggressive, strong, and independent makes a woman a bitch, then maybe that’s what it’s like to “fight like a woman.”

Always remember that you’re not “just a woman”. YOU ARE A GLORIOUS FEMALE WARRIOR! And you should never be afraid to speak out and fight like hell against all of these. Let the world hear you roar!