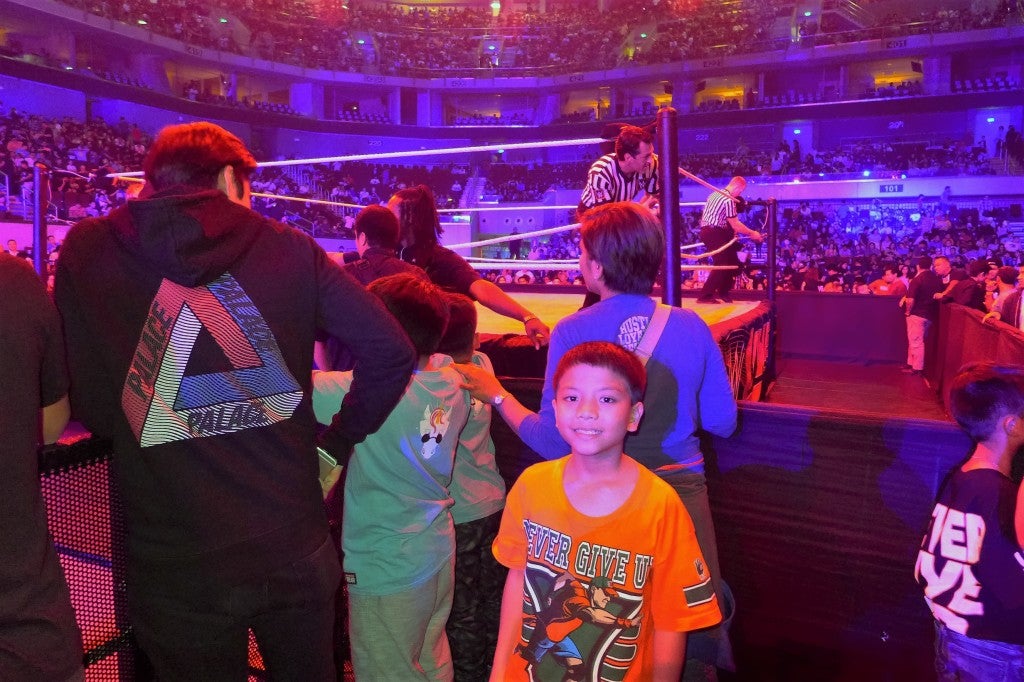 As a young kid, I never really cared about World Wrestling Entertainment–WWE, as it is more popularly known. Then I got introduced to the WWE spectacle in June 2015 and since then, tuning in to Fox Channel to catch the WWE shows was an every day routine.

I think that it is quite an opportune time that WWE went to the Philippines this September. I felt very happy when I heard about the news that the biggest entertainment empire was going to Manila. I immediately told my parents about this so they could get me tickets before they got sold out. To secure tickets (funded by my parents, of course), I struck a deal with them that I would save up for the show tickets by getting high grades in my school quizzes and exams. Early on, it seemed I would not be able to save enough in time to buy the tickets I wanted so bad. I was only able to save enough for 1 ringside ticket. Of course I needed at least one more ticket for an accompanying guardian or parent. Slowly, the tickets for the most sought after seats were being sold out online. My hopes to be able to watch a WWE Live show were crumbling. One afternoon, I decided to snoop on my mom’s planner and saw an entry which read “August 23– Claim WWE Tickets”. My eyes lit up, and I asked my mom what it meant. With the beans spilled, my mom told me that she already bought tickets as early as June 1 (2 days prior to the public selling of WWE Live Manila tickets). My Dad told me that everybody knew about the WWE tickets except me. I was overjoyed to know that my dream to watch the WWE would soon come true.

When the day of the WWE show (September 9) came, I went to school very excited, knowing that later that day, I will be watching the greatest wrestling superstars in WWE Live Manila. After being picked up from school, we immediately went straight to the Mall of Asia Arena to avoid the Friday “car-mageddon” and loosen up before the start of the show. We arrived early enough to beat the long lines of the WWE souvenir shop. We were able to get for ourselves autographed posters, the WWE Live official program, and my very own AJ Styles replica “Phenomenal 1” gloves. 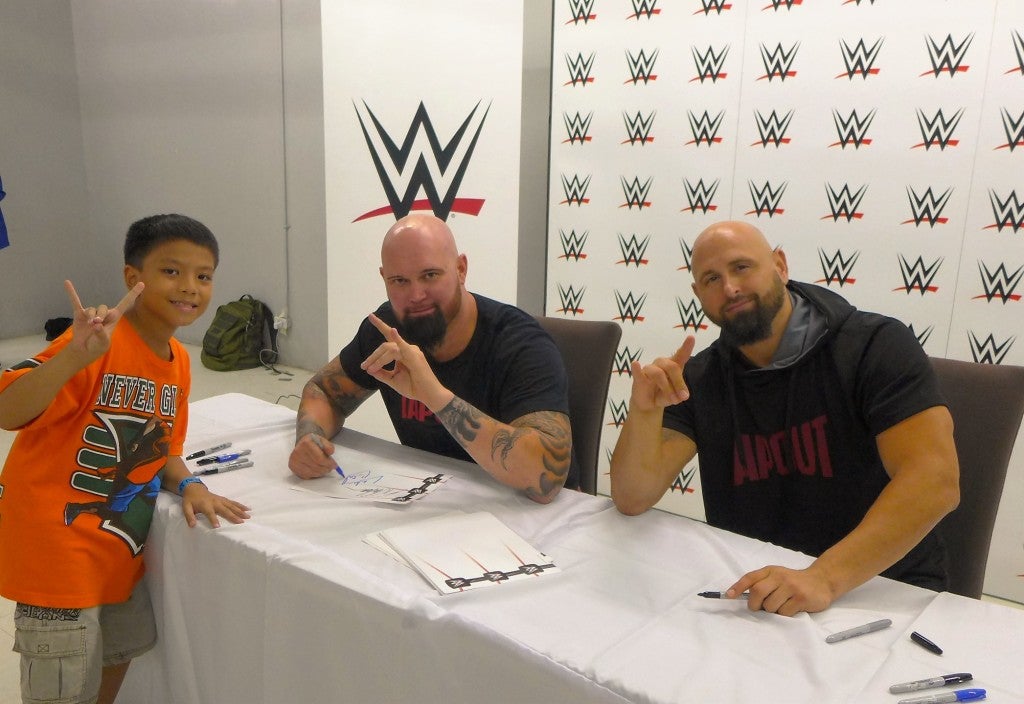 We also arrived early for a special treat as I was one of the lucky ones to be chosen by INQUIRER.net for the Meet and Greet with select WWE superstars. During the meet and greet we were fortunate to meet Tag Team partners Luke Gallows and Karl Anderson. I was so embarrassed because I was wearing a John Cena T-Shirt. John Cena is one of their top rivals. Wearing a John Cena shirt turned out to be a blessing in disguise since it gave me more time to interact with them when they asked me if I was a John Cena fan. I hesitantly answered, “I like AJ Styles and the Club (to which Gallows and Anderson belong)”. The duo was not hostile towards me despite me wearing a Cena shirt. They signed the official signature pad and I had a picture with the tag team duo. And guess what, our photo even ended up in the social media press releases of the MOA Arena.

After the meet and greet experience, my Dad and I went to the lobby to meet his friends. While we were waiting in line, I was shaking with excitement because I will finally be witnessing my idol, Roman Reigns, in live action. The crowd was a mix of young and old fans–proof that the WWE fandom transcends generations. After we got inside the arena, we went straight to our seats and waited a few more minutes before the program started. After a ten-minute wait, I saw the ring announcer, Jojo Offerman. At this point I already knew that the program was about to start.

The opening match featured Cesaro vs Sheamus. Within ten minutes, Cesaro defeated Sheamus with the Sharpshooter that forced the latter to tap out. The second match was between Goldust and Braun Strowman. The people thought that it would be over in a blink of an eye. However, the crowd was in for a surprise when Goldust was able to bring the 7 foot giant Strowman to his feet. Braun, however, was too strong to be down for a three count. At the end of the match, Goldust didn’t know what hit him, and Strowman was once again victorious. No one knows when he will be defeated or if someone can even manage to bring him down.

The next match showcased Neville vs Curtis Axel. I was so excited for this match because it featured Neville, my favorite high-flyer. When Neville was about to perform his finisher, I stood up because I was sure he would already win. I hurriedly lined up by the entrance aisle to have a chance to let him sign my magazine as he walked by.

The fourth match was between 3 teams: The New Day vs. The Shining Stars vs. Gallows and Anderson. I anticipated it to be an exciting match because it was for the WWE Tag Team Championship. After a misunderstanding by The Shining Stars and The Club (Gallows and Anderson), The New Day capitalized on Karl Anderson and hit the Midnight Hour for the win to retain their championship.

The last match before the intermission was John Cena vs. Big Show. It was a long match which was highlighted by the unexpected. Big Show was atop the second rope preparing for a dismount when we heard a snap followed by a loud thud. Instantly, the “World’s Biggest Athlete” was sprawled on the floor. Taking advantage of the mishap, Cena did the 5 Knuckle Shuffle followed by an Attitude Adjustment, his signature finishing move, to snatch the win.

After a 15 minute intermission, the next match ensued. This time it was Charlotte vs. Sasha Banks for the WWE Women’s Championship. During the match the crowd cheered on the women gladiators by chanting “La-dies wrest-ling!!” repeatedly. After a roll-up, Charlotte won the match via pin fall. The win was controversial since she pinned Banks with her foot touching the ropes. The referee failed to see this, thus Charlotte winning the match and retaining her title.

One of the most awaited matches was between Roman Reigns and Chris Jericho. This was my favorite match of the night because not only did Reigns and Jericho put up an exciting joust, Jericho gave the fans a taste of his promo before the match, aimed at getting the ire of the crowd. Upon getting hold of the mic, he rolled out Y2J-style insults saying that the Philippines stinks and that Manila is the anus. The Filipino fans called Y2J g*go, which in English means “a jerk.” To the fans’ delight, Jericho responded by saying, “Listen man, I don’t know what it means, if your calling me a g*go, it must be good thing….I guess I’m the biggest g*go you’ve ever seen.” Jericho’s antics elicited laughs and jeers from the crowd.

Both fighters did not disappoint the crowd, delighting everyone with their signature moves. We saw Jericho pin Reigns with his “walls of Jericho”. After recovering, Reigns speared Jericho to end the match, I hurriedly got out of my seat and rushed to the center aisle to get my poster signed by my favorite WWE Superstar, Roman Reigns. But before I could have my autograph, Chris Jericho snatched my poster and threw it to the floor. I did not get mad because I still got my poster touched by a WWE Superstar.

The main event was for the WWE Universal Championship. It featured title holder Kevin Owens, and challengers Sami Zayn and Seth Rollins. This match featured three of the most exciting superstars in the WWE. During the match, chants of “This is awesome!” resonated in the arena, and the WWE superstars certainly did not disappoint the fans. Blow after blow, kick after kick, bodies were slamming all over, inside and outside the ring. The finishing move came from Owens as he did a “Pop-up-Powerbomb” to pin down Zayn and retain his championship belt. After the final bell sounded, the action was far from over. Post-match action saw Kevin Owens about to hit Zayn with another “powerbomb”, then Seth Rollins tackling Owens to prevent it. Zayn was able to hit Owens with a “Helluva Kick”, and Rollins followed up to slam Owens with the “Pedigree”, which sent Owens heading to backstage.   Zayn was seen calling for a truce with Rollins, which at first Rollins hesitated to accept. Rollins eventually shook Zayn’s hand and with this, WWE Live Manila had already been concluded.

Making the night more memorable was when I was able to get ring announcer Jojo’s autograph. While she was walking towards the backstage, I called Jojo’s attention. She walked towards me and smiled while she signed my souvenir program. Upon exit, I was so thrilled to be given our beautifully designed souvenir WWE steel chairs…my remembrance from this WWE Live Manila Experience.

It was truly an unforgettable experience for me because I saw my favorite WWE Superstars and Divas live! The whole experience was sweeter and more meaningful because I earned my tickets through hard work and perseverance (I was made to believe so).

I am looking forward to watch more WWE shows in the future. Perhaps I will get a chance when we visit the United States next year. This time I am setting my sights on Wrestlemania 33. Until then, it’s time to study harder.