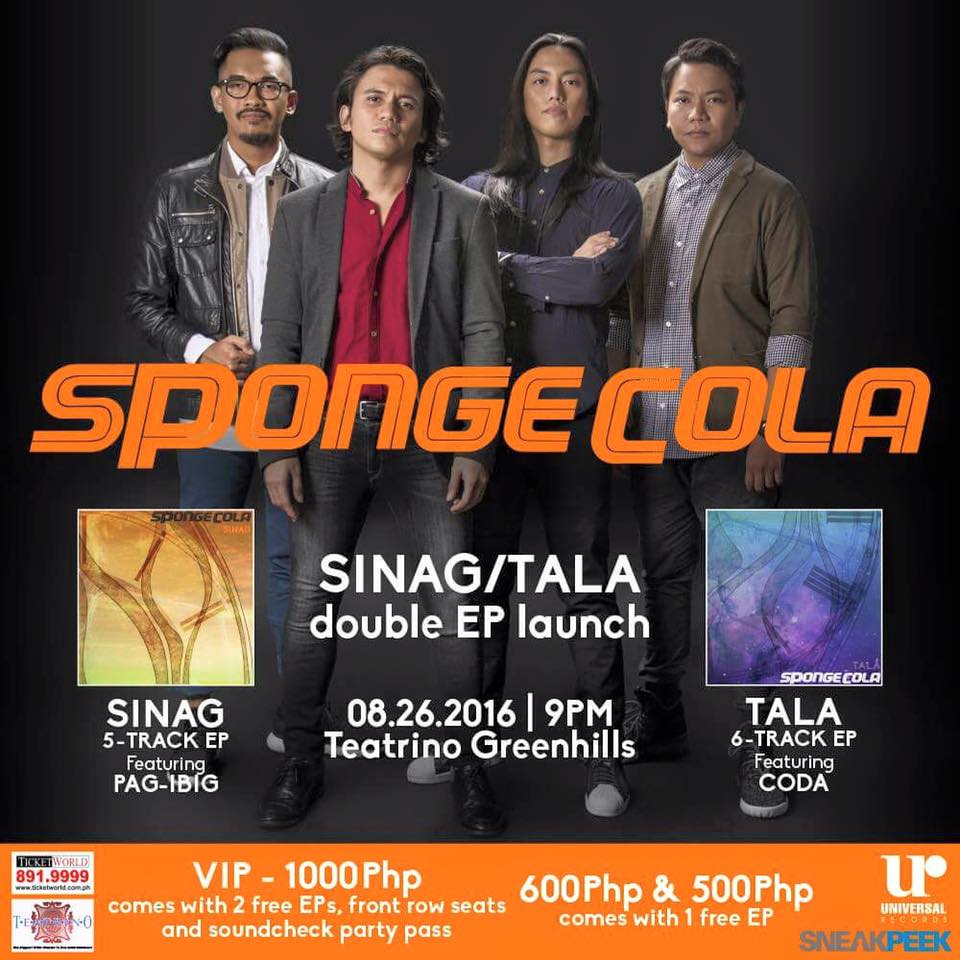 Their EP Tambay has likewise earned them the rare distinction of being the only other recording band (besides the Eraserheads) to reach Diamond Record status.

But frontman Yael stressed it wasn’t a conscious effort from the group to come up with a double EP instead of a full album; “It just so happened that when we looked at the list of tracks, we couldn’t decide on a proper flow for the track list.”

“There was an even split, half of the songs were upbeat and “sobrang happy” while the rest of the tracks were quite “somber.” Doing mini-albums felt like the natural thing to do, so in the end we decided to make a double EP instead,” adds Armo.

Mood Music
Taken as a single unit, the EPs are aptly called “Sinag Tala,” a portmanteau of “sinag” or ray of sunshine and “tala” for stars. It also underscores the contrast in themes of the material the band has put together in the last few years.

“We were thinking of a title that would also be a play on the words that would best describe the mood of each EP. It’s like when you want to listen to fun music then all you have to do is play “Sinag,” and when you’re feeling a bit “emo” you can switch to the songs from “Tala,”explained Yael.
“In a way, it’s like curating a playlist for our fans. “Sinag” is suited for daytime listening and “Tala,” for evening, one perks you up while the other is best for reminiscing and introspection,” I guess that’s another way to look at it,” says Armo.

SINAG
Setting up the good vibes is “Pag-ibig” the carrier single of “Sinag.” “The song was written by Simon Tan and is being used as the theme song of the GMA 7 TV series “Dangwa,” which stars Janine Gutierrez, Mark Herras, and Aljur Abrenica.

The second track to be released is the almost anthemic “Pasukan na Naman” a throwback to the band’s school days and inspired by one of the old songs from the Eraserheads.

“This is also the first song that we incorporated math in the lyrics; “may PE at history and x squared = 9, X = 3…” the band noted.

“Ang Saya,” the band revealed is the sibling of their mega hit “Tambay.”

“Back then, we were commissioned to do a song for a campaign and they chose Tambay,” Yael recalled. “Ang Saya” was the other choice, and we felt it also deserved a shot to be heard so we included it in this EP.

The only English track in the “Sinag” EP is the song “Butterflies,” which they group describes as “yazzy” or their own take on jazz.

Wrapping up the first EP is the song “Bisita” a shout out of thanks to all the places that the band has performed throughout their career.

“The lyrics says it all, ‘hindi naman ako tagarito, pero salamat sa maayang pagtanggap, ang bukas ay darating ala-ala’y babaunin, sana ay magkita pang muli.” All these years, we’ve played in so many places and we are just grateful that we are always well-taken cared of by our hosts, bisita man kami pero they treat us like family,” Yael stated.

TALA
On the other end of the spectrum is the EP “Tala” which is filled with melancholic slow-burners such as the carrier single “Coda.”

Bassist Gosh Dilay explains, “It’s a post breakup song, and we were trying to reimagine how it felt to end a relationship, and contemplating if you made the right decision.

Next, the band explores meaning of desire in the song “One and Only Weakness.”

Yael says “it’s the feeling of how badly you want someone and what you’d do once the table has turned. It’s also a bit experimental for us as we used digital drums on the track.”

Completing the track list are “Pagtungo” written by Yael’s brother Yan Yuzon, an acoustic and full band version of “Bahaghari” and “Sabay Tayo,” which became the theme song of the Gilas Pilipinas Basketball team.

“Sabay Tayo” was memorable not only because my wife Karylle wrote the lyrics but because we also got to work with the UP Tugma who played the traditional instruments in the song,” said Yael.

Frankenstein Baby
In their previous interviews, the band used to describe their new EPs as a “Frankenstein” of sorts because of the recording process.

“Frankenstein because we worked with several writers and producers for the EPs and also got the chance to record the tracks in several studios and whole lot of other places,” explains Yael.

“There was a time I was recording my vocals at our house, guitars inside the car while Armo did “One and Only Weakness” in this really nice bar in Katipunan called Route 196.”

“It was fun to do the album because we were not forced to finish everything inside the studio.”

The band adds that this is also the first time they didn’t have to cram to finish the album.

“In all our previous albums we would often be pressed for time and would always end up rushing to finish the album, this time we had the luxury of working at a relaxed pace,” Armo added.

“We had breathers to refresh our minds. So, every time we resume the creative process, there’s always something new.”

Episodic EP-ics?
The band also teased that the double EPs may just be a sign of things to come.

“We want to create something episodic—parang Star Wars! So “Sinag” and “Tala” could be part 1 and 2 of a series—and hopefully we could connect everything both visually and musically; from the album covers which you could connect into a bigger picture—who knows!” Yael says with excitement.

But for now they are releasing the EPs separately; “We often interact with our fans through Facebook and social media, and they would tell us that they go to several of our mall shows and end up buying several copies of the same CD. So this time, since we are releasing two EPs it would be cheaper than a full album and they could just buy one now and get the other one on our next show!”

To celebrate the release of “Sinag” and “Tala” Sponge Cola will be having a concert at the Teatrino on August 26, 2016. VIP tickets are priced at P1000 which comes with 2 free EPs, front row seats and SoundCheck party passes. P600 for the succeeding rows, comes with 1 free EP and P500 for the remaining rows plus 1 EP.

Sponge Cola Sinag + Tala is produced by Spongecola and Alvin Cornista and released by Universal Records.

For tickets and reservations call Ticketworld at 891.9999 or log on to www.ticketworld.com.ph