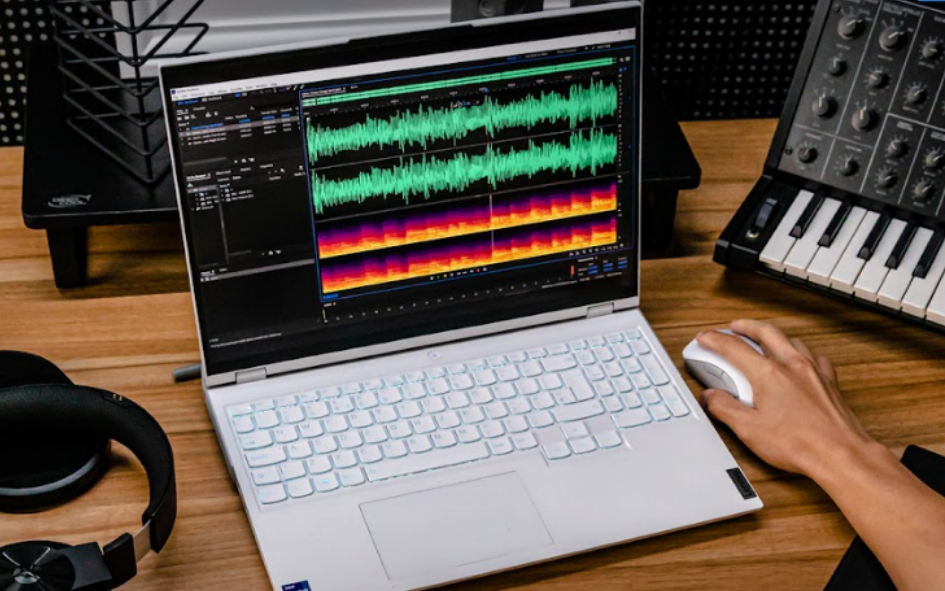 In this review, POP! examines one of Lenovo Legion’s latest gaming devices – the Legion 5i, a model packed with components that were built to perform. Like previous Legion iterations, this laptop is subtle in its design, but packs a powerful punch for all your gaming needs thanks to the latest generation of Intel Core processors. 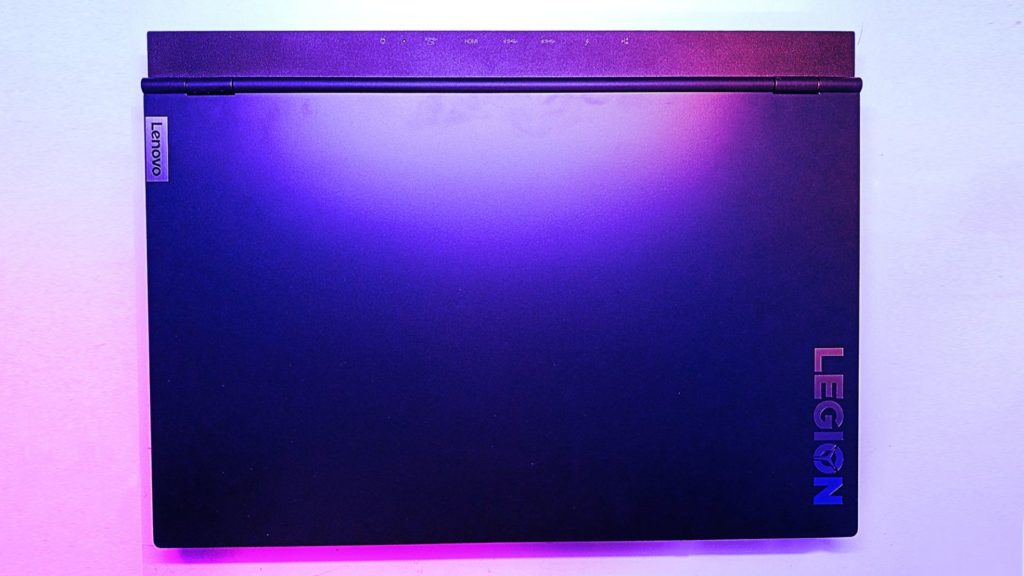 At first glance, the Legion 5i does not look like a gaming laptop. There aren’t any RGB lights or bright colors, and its edges are not rounded. It has a nice iridescent logo on the lid that changes colors at different angles, so that could be considered a gamer-type design. Other than that, it’s outer appearance doesn’t command any attention. 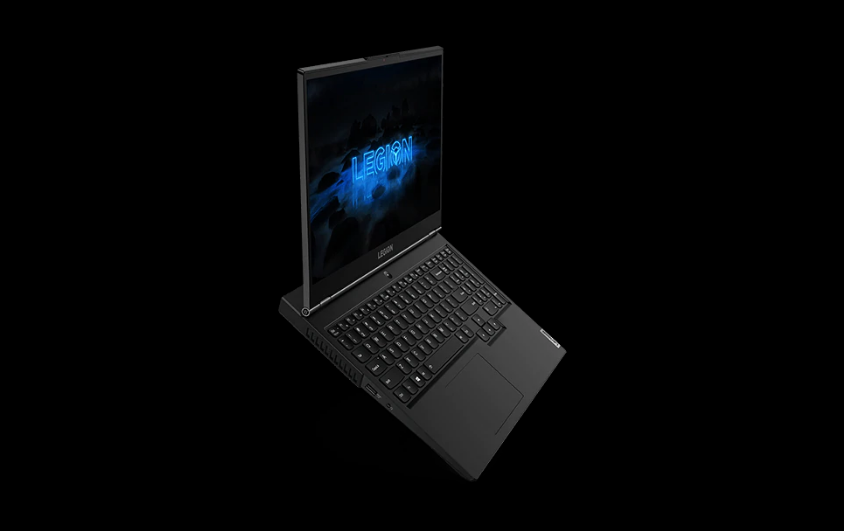 The top part is colored with what Lenovo calls “Phantom Blue” while the bottom is colored with “Shadow Black” – both colors that are very quiet and subtle. That combo of colors looks great as it makes the laptop seem quite sleek as well. 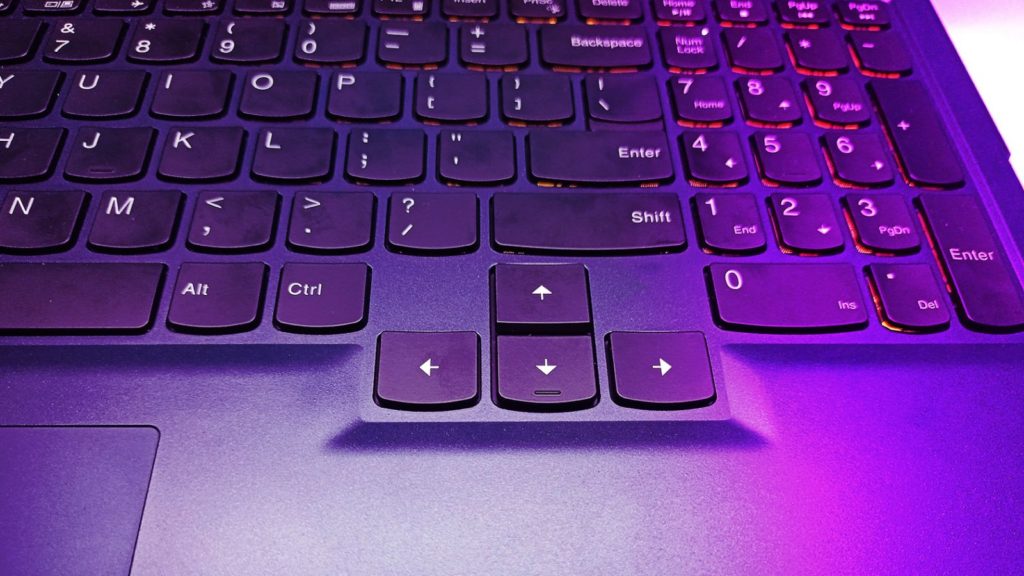 The Legion 5i has the Legion TrueStrike Keyboard which feels tactile , responsive, and pretty comfy to type on. The layout is great, as Lenovo was somehow able to add a numpad without making the keys feel cramped. The arrow keys on the bottom right are separate from the other keys, which allows it to be in full size instead of being tiny and hard to press – great for gaming. I’m not a fan of the 4-zone RGB backlighting for the keyboard though. It looks a little messy, and I don’t see why they didn’t do per-key backlighting instead. Nothing much can be said about the trackpad, it’s smooth and responsive. 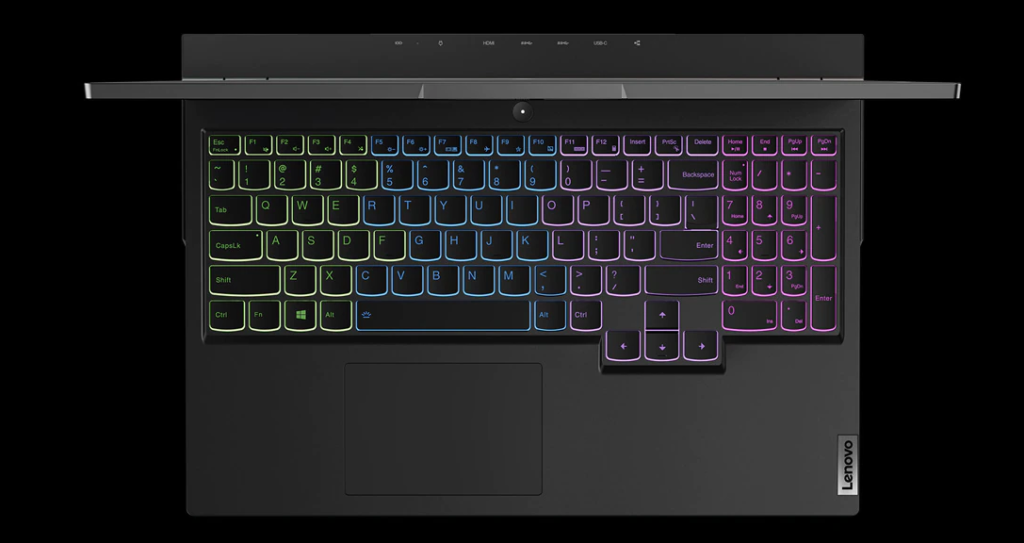 The camera is decent, but as it is only a 720p webcam, it doesn’t offer the highest quality. The built-in speakers are alright as well, but you’re better off using external speakers or headphones to get much better quality. 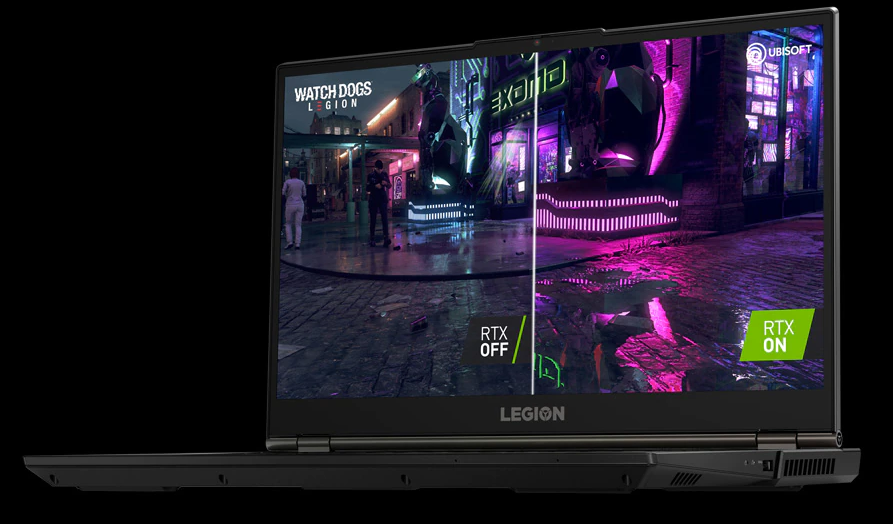 As for the battery, according to Lenovo it can last up to 8.9 hours, but so far, per the test usage, the battery lasted for up to 6 hours, in which we used the unit for gaming and other hardware intensive tasks such as video and photo editing, and even some tinkering with 3D animation. 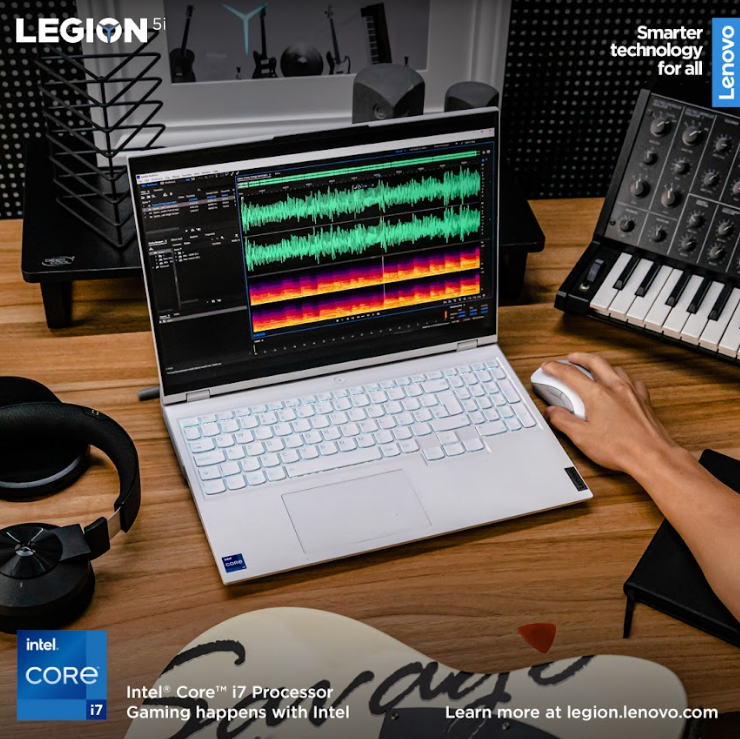 The charger is oddly huge, which accompanies the heavier build of the laptop itself, and there’s a good reason why: The onboard RTX3060 has one of the highest TGP found on any gaming laptop with the same RTX3060 at 130W, so the unit will need a charger that packs a punch. The unit as a whole weighs 2.4 kg (5.3 lbs), which is heavier than other competitors, so be ready to carry it using a laptop bag. What’s good about the build though is that it is clearly sturdy and strong, and it can take a decent beating. 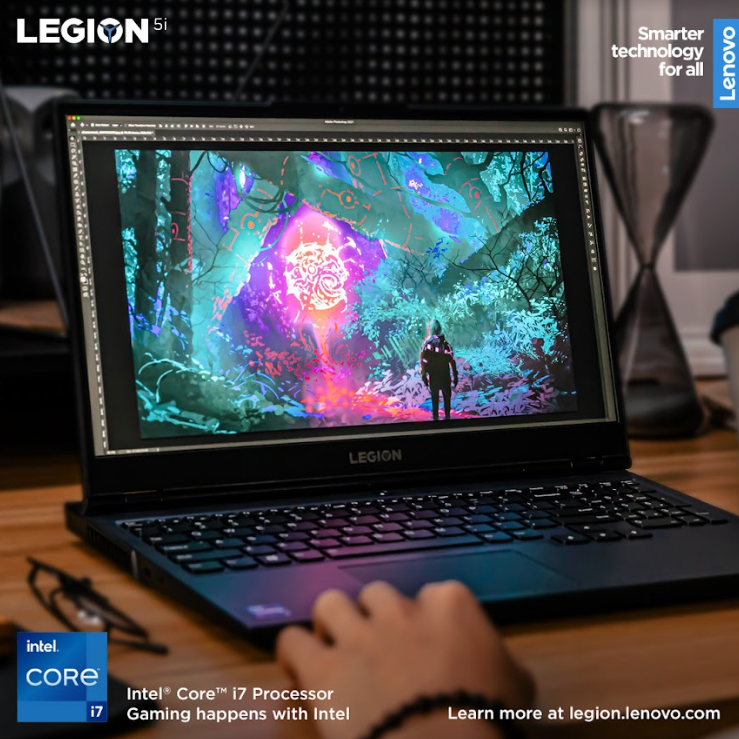 A Screen that does its job correctly 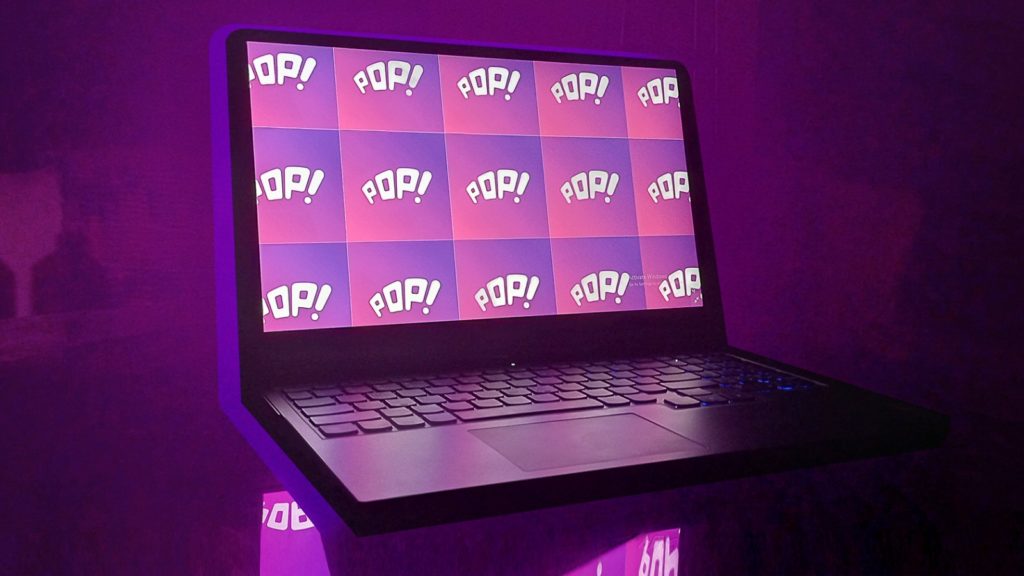 A Delightful Amount of Ports 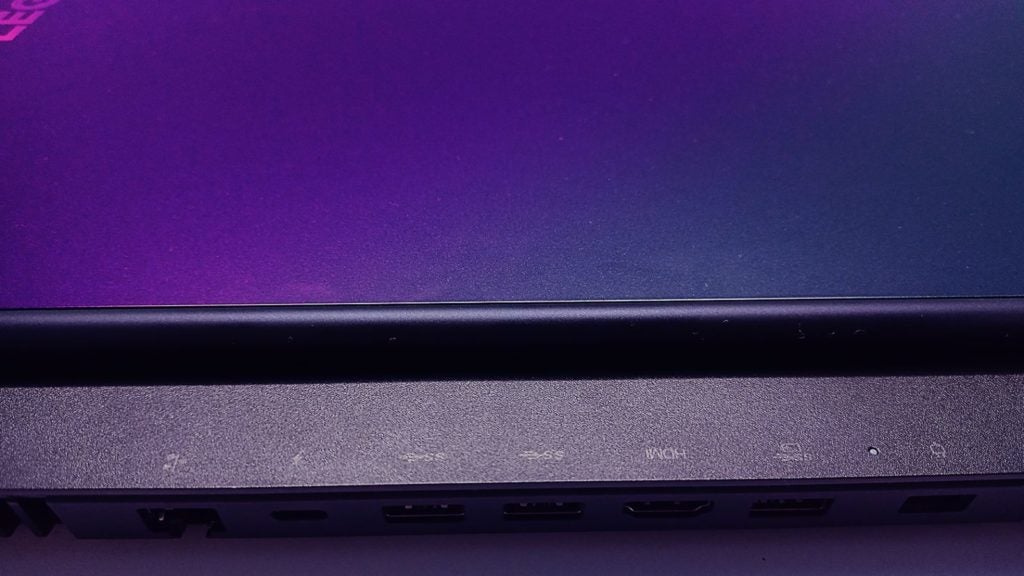 Something that we adore about the Legion 5i is its back region. When the lid is opened, the back of the laptop sort of sticks out – and that’s where the multiple ports are located. Putting most of the ports at the back was a genius idea since it makes cable management easier and keeps wires out of sight while the laptop is in use. There’s also a bunch of space at the back which means there’s a huge selection of ports – more than rival brands. It includes the charger port, an HDMI port, two USB sockets, a Type-C connector, and an LAN socket.

This particular model of the Legion 5i can give you lots of power for games. It uses a powerful 45W 11th-generation Intel® Core i5 processor. Play and stream the latest AAA titles at peak performance on the Legion 5i with up to 5.1GHz clock speeds, 8 cores, 16 MB of Intel®Smart Cache, Intel®Thermal Velocity Boost, Intel®Dynamic Tuning, and Intel®Wi-Fi 6.  The GPU is amazing – a GeForce RTX 3060. It even has 16gb ram which can be upgraded up to 32gb. A plus is the 1tb SSD.

All these specs give us a laptop that powers on in less than 3 seconds, can handle the use of multiple programs with ease, and lets us play mainstream games with high FPS and rare drops in speed. It can handle ray tracing too, no problem.

The 6-core i5 processor is not exactly the best for extremely demanding tasks like heavy 4k video editing, but it still works well. 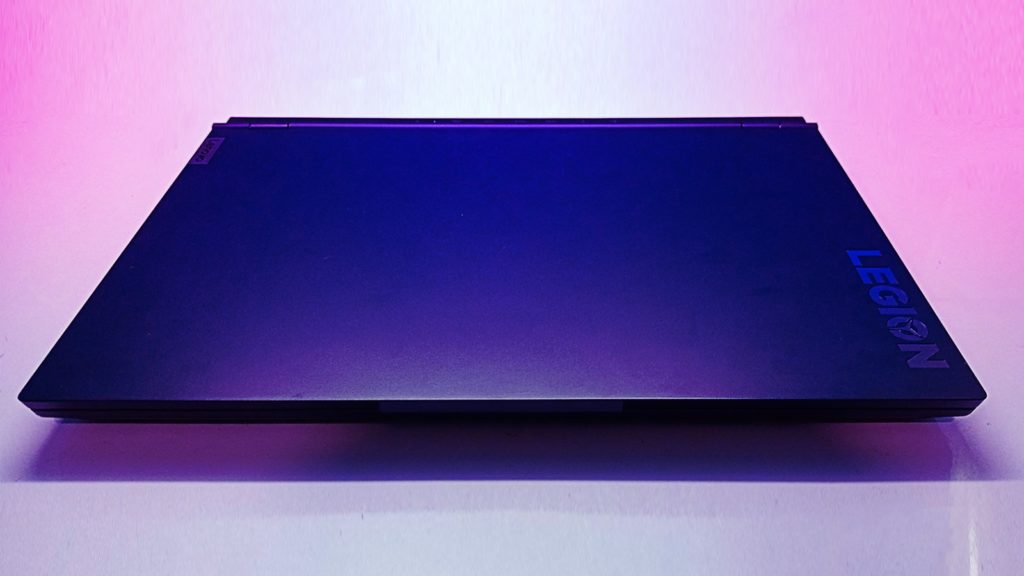 The Lenovo Legion 5i offers a powerful and speedy gaming experience with great components and a comfy keyboard. Unlike most gaming laptops, the Legion 5i’s design is very subtle and quiet, perfect for people who don’t feel like they need that attention. It does feel a bit heavier than most laptops we’ve carried around before, but it’s one of those things that just comes with getting something with a high quality and durable build.

Your Legion is much more than a standard PC, so it deserves more than standard support.

The Lenovo Legion line comes with an option to upgrade to the Legion Ultimate Support, which, as the name suggests, provides ultimate support from expert technicians to end users. By upgrading your after-sales support, you are assured of 24/7 tech assistance on hardware optimization, software guidance, and more to ensure you remain productive, whether it’s gaming or work.

See the difference between Standard Support and Legion Ultimate Support: 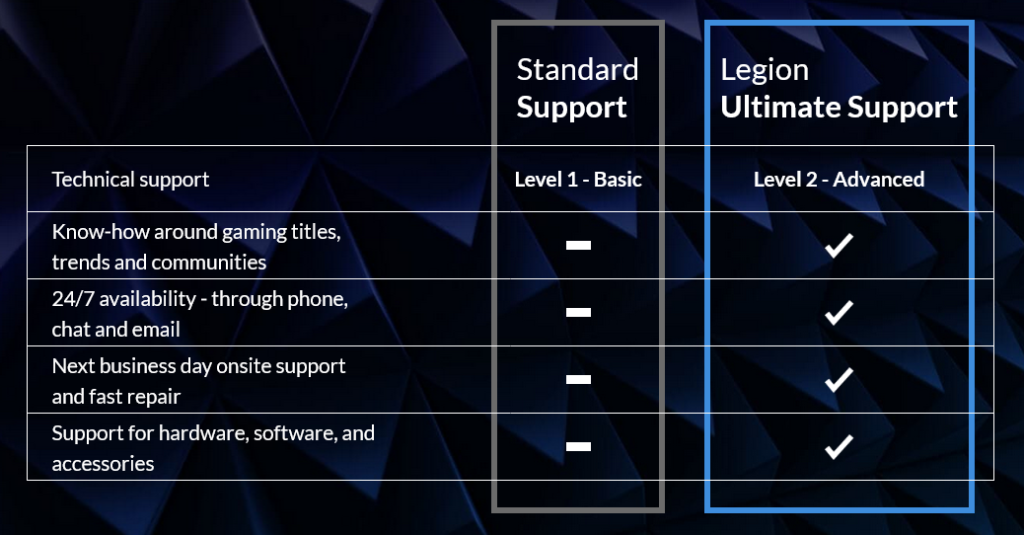 Click here to check out more details about the Legion Ultimate Support service. 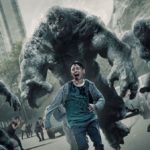 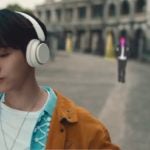