Living in Spain has been a ride these past 3 weeks, especially for someone just beginning her ‘adulting’ life in a country that “feels” like home but not quite. There are just a lot of things to unpack (literally) when it comes to moving to another country, and culture and characteristics are just some of them.

If there’s one thing that people don’t stop doing when they go from one place to another, it’s comparing their hometowns to the brand-new one they’re residing in. It might just be a sign of homesickness or they just can’t help but compare, and personally speaking, I’ve done that so many times (well, it doesn’t hurt anyway).

With that being said, here are a number of things that I found particularly interesting after moving to Spain:

The commute is superb. No, really. It’s definitely more efficient and friendlier to the public.

This is honestly my first thought when I rode the Madrid Metro on the day I first arrived. It’s amazing how you could get to one place to another in a matter of minutes.

What’s also good about it is how all the lines of the metro are interconnected, so if you need to get to Sol, for example, then you can either take Line 1 (Pinar de Chamartin-Valdecarros), Line 2 (Las Rosas-Cuatro Caminos) or Line 3 (Moncloa-Villaverde Alto). I used to commute a lot back in Manila (and before the pandemic) so it’s a valid comparison.

Spanish people eat in very different times than we Filipinos do. Like seriously. Spanish mealtimes are quite different from ours in the Philippines and it could take a while to get used to. While breakfast or desayuno is usually served at 8 A.M. or earlier considering school and work, what comes after that is quite distinct to Spanish culture, I believe.

After breakfast, comes the mid-morning snack from 11 A.M. to just before 2 P.M., if they haven’t eaten a proper breakfast of course. Then by 2 P.M. to before 5 P.M. is their lunch time or almuerzo, which is fairly similar because they sometimes eat at 12 P.M. like we do. Of course, after lunch comes merienda from 5 P.M. to 7 or 8 P.M. And dinner or cena is from 9 or 9:30 P.M. onwards.

If you’ve heard about the tapas culture in Spain, then that’s just their version of pica pica or light snacking in between meals.

Spanish kids and teenagers have it good in terms of their school hours.

As a language assistant in a school in Madrid, this observation has been quite striking. These children have such a moderate and tolerable school schedule that I’m a little jealous (joke ½).

While school hours actually depend on the school, some schools (like mine) usually begin at 8:30 or 9 A.M. and end at 2 P.M. Yeah, that short. No wonder those high schoolers from Elite had a lot of time to party at night and still be able to attend class the next day.

The times of the sunrise and sunset are late.

That’s one of the things that still surprise me every single day. In Madrid, the sun usually rises at around 8 A.M., and the sun sets at almost 8 P.M. too. This is also why Spanish people eat at very late times, since they follow the sun.

In the Philippines, you can just throw all your trash in one huge garbage bag and leave it at that. In Spain, it’s a different story. These people take their recycling seriously, and will get mad if you don’t follow that rule.

With that said, there are 2 different bins that are usually put out in front of buildings: a yellow one for recyclables and a gray/orange one for non-recyclables. The same goes for the garbage bags you’d have to use in throwing your trash too, just for formalities. Just make sure to separate your recyclables and non-recyclables then you’re good to go.

Groceries only carry the necessities, not much of the beauty or cosmetics.

You’d be shocked to see that groceries in Spain don’t carry all kinds or types of shampoos, conditioners, lotions, etc. Yeah, groceries here usually only carry food items, cleaning items, bathroom items, and the like. Well, there are some options for shampoo or conditioner, but not everything.

You can find those in specialized stores like Primor.

Spanish people hold their history and culture in such high regard. 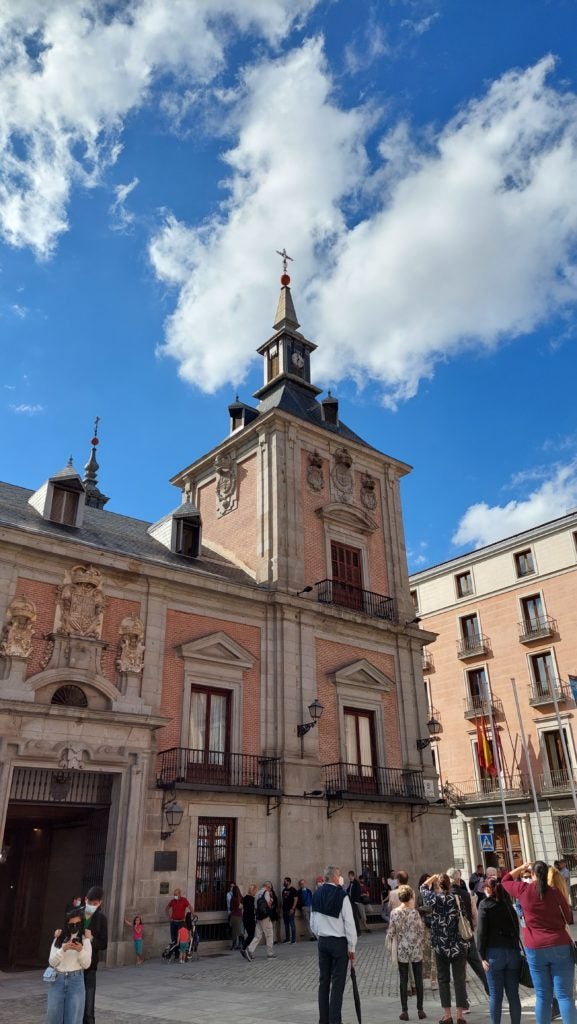 And finally, this is the most important characteristic that I’ve noticed in Spaniards. Yes, Madrid is a cosmopolitan city, but it doesn’t remove much of their Spanish culture. In fact, it’s so imbued in their daily life that it’s endearing to see such a culture being embraced and loved by the people living in it.

These people hold their historical landmarks, cultural centers, and culture in general in such respect that I wish the Philippines could do the same.

Bonus: People aren’t required to wear their masks outside anymore.

Yup, people aren’t required by law to wear their face masks outside anymore when they’re walking around. But, they’re required to do so when they’re entering stores or boutiques. All thanks to their superb vaccination rates and their willingness to get vaccinated.

Just because they’re not required to wear it outdoors anymore doesn’t mean that they all don’t wear masks. Some actually do prefer wearing their masks when there’s a large group of people around, and will only remove it when there’s not much people in the area.

So, that’s just a number of things and characteristics of Spaniards that I find quite interesting, as a girl from a former colony moving in to former colonizer territory. Also, the Filipino community here is strong, so I probably won’t feel that homesick!