PowerPoint nights have become a fun way to update your friends about your life or simply spend time with one another crying from laughter. They are a good way to document events (and people), prove one’s very obscure points and even to flex your presentation skills.

Here are 10 topics to inspire you for your next PowerPoint night, take them as they are or use them as jumping off points for your very own renditions of the topic.

1. Which old flame of Jose Rizal would your friends date? 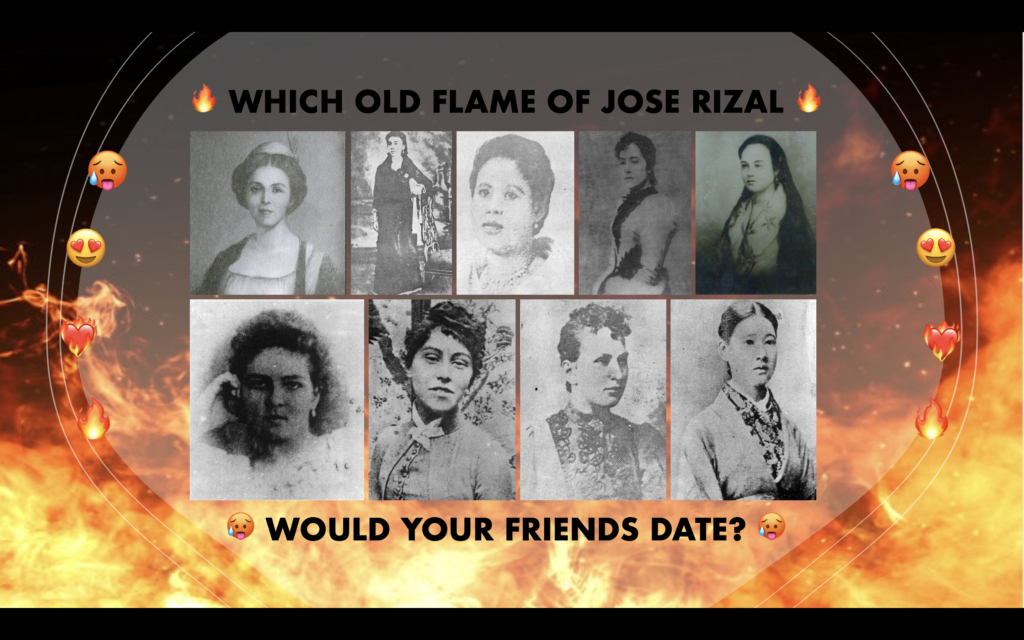 Jose Rizal was more than just a revolutionary, author and gym buff— he was also quite the lover. From Segunda Katigbak to Josephine Bracken, 9 women were recorded to have been…. more than friends with Rizal.

Quite the feminist himself, Rizal was drawn to each of these women for different reasons. Each woman was a unique individual, but the question remains: who would your friends most likely date (if they were as smooth as Kuya Pepe)?

2. Recasting Four Sisters and a Wedding but it’s you and your friends 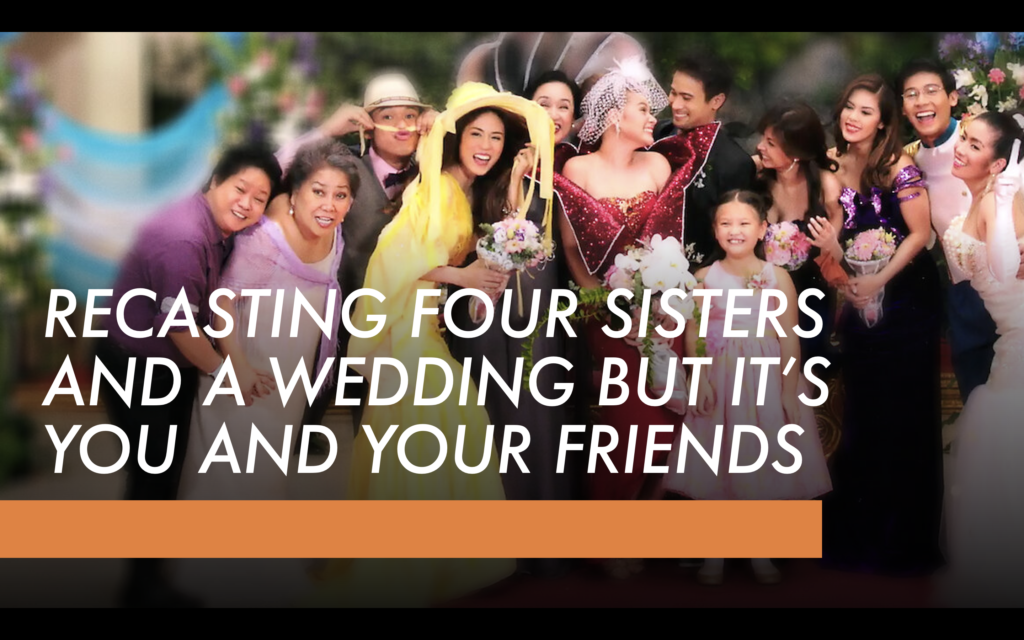 The iconic movie will have you laughing in one scene and crying in the next. If you haven’t seen the movie yet, don’t worry, there are in fact more characters than just the four sisters—and it is possible that you might relate with one character a little more than the others.

3. An in-depth analysis of your friend group’s reactions to different types/amounts of alcohol 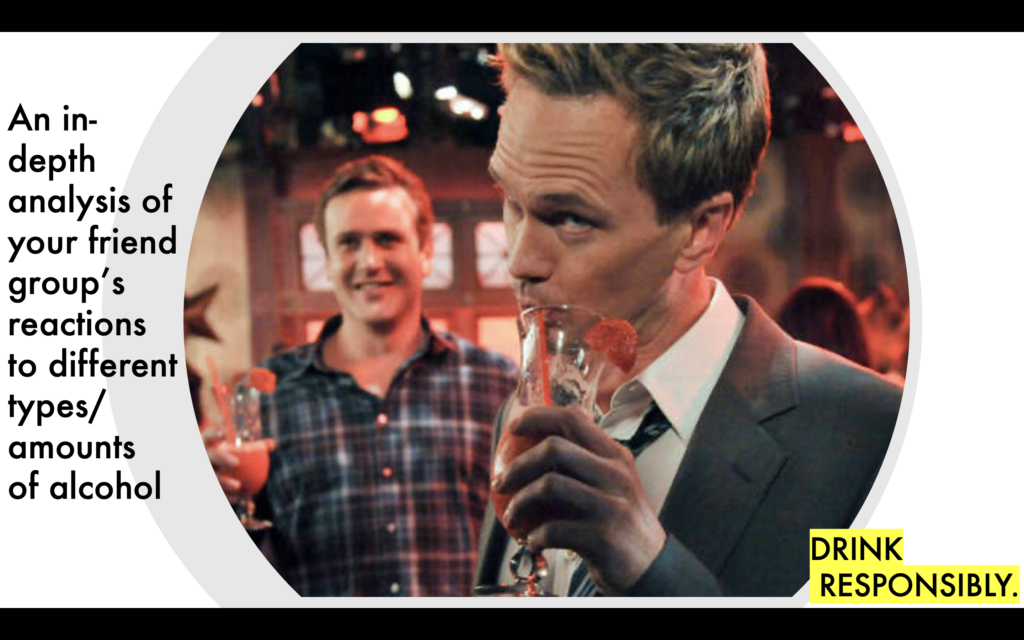 Inspired by How I Met Your Mother episode 22 of Season 6, entitled: The Perfect Cocktail, different people react to alcohol (and different types of alcohol) differently.

Take this chance to finally use all those saved photos and videos of your friends as their “alter-egos” come out, but in an analytical, scientific, research paper kind of way. 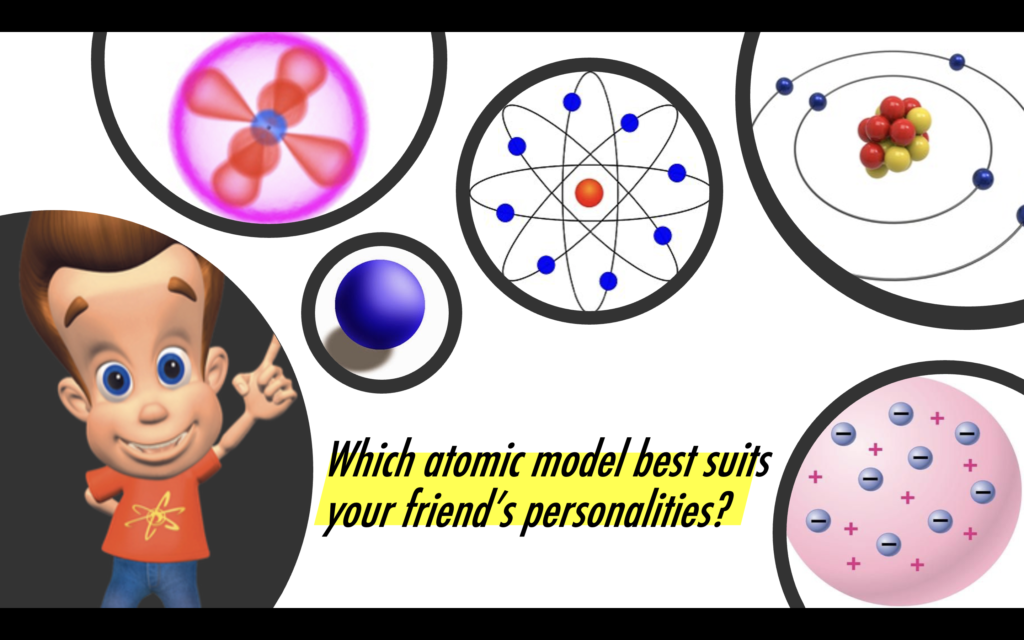 Anything that takes up space and has weight is considered as matter. We are all matter, and we are all made up of atoms. Time to get personal at an atomical level (and perhaps philosophical) for this PowerPoint night.

5. What would your friends do if they were on ASAP? 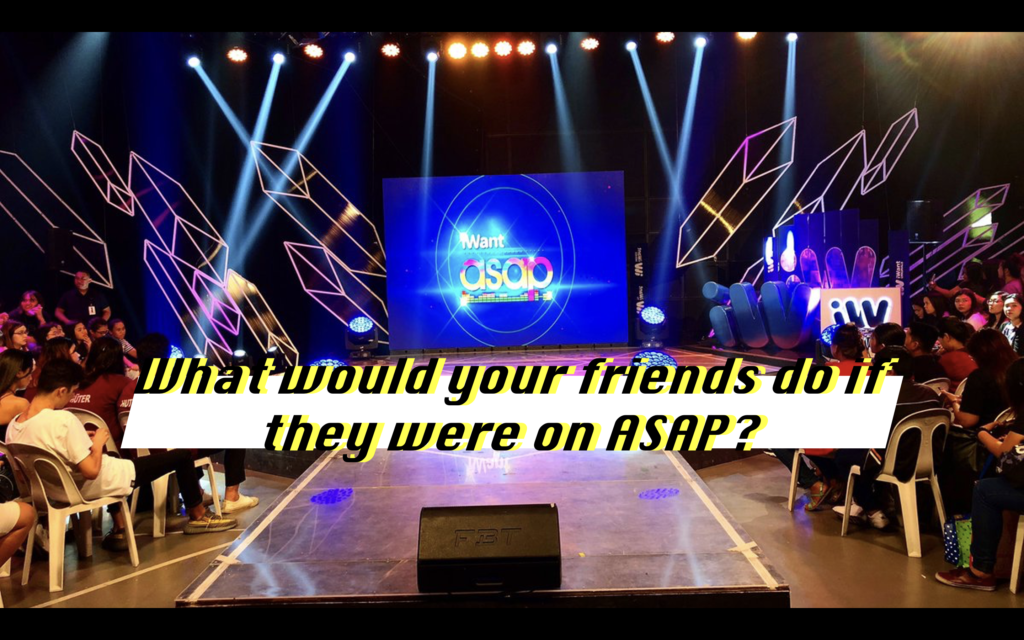 ASAP has provided entertainment for more than 20 years; a variety show that keeps on giving. What would your friends do if they were on its stage? Would they be the next Asia’s Songbird or the next Dance Princess of the Philippines?

The roles don’t stop there of course, it takes a hardworking and dedicated crew to produce a show like that, don’t forget about the talent off-screen too.

Maybe you could even take the PowerPoint night to another level and turn it into a barkada variety show based on your answers.

6. Taylor Swift songs/eras that best describe your friends’ romantic past and present (or lack thereof) 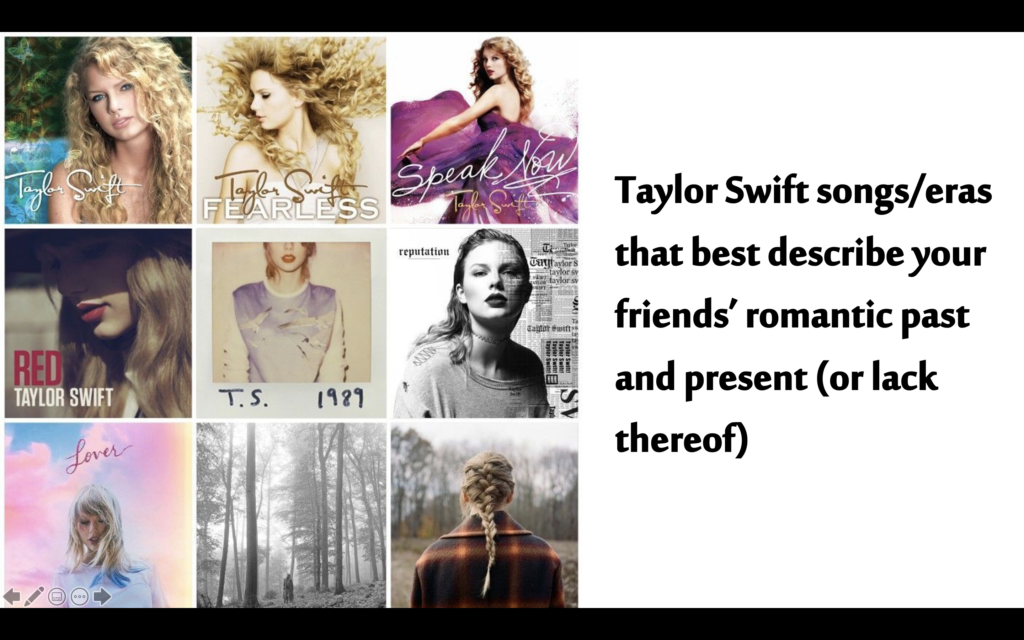 This PowerPoint topic was specifically made for all the swifties out there. While Taylor and her fans prepare for the release of Red (Taylor’s Version), take a trip down memory lane and rediscover past (and present) emotions through her current discography.

7. Ranking who would most likely help you hide a body (and what their plan would be) 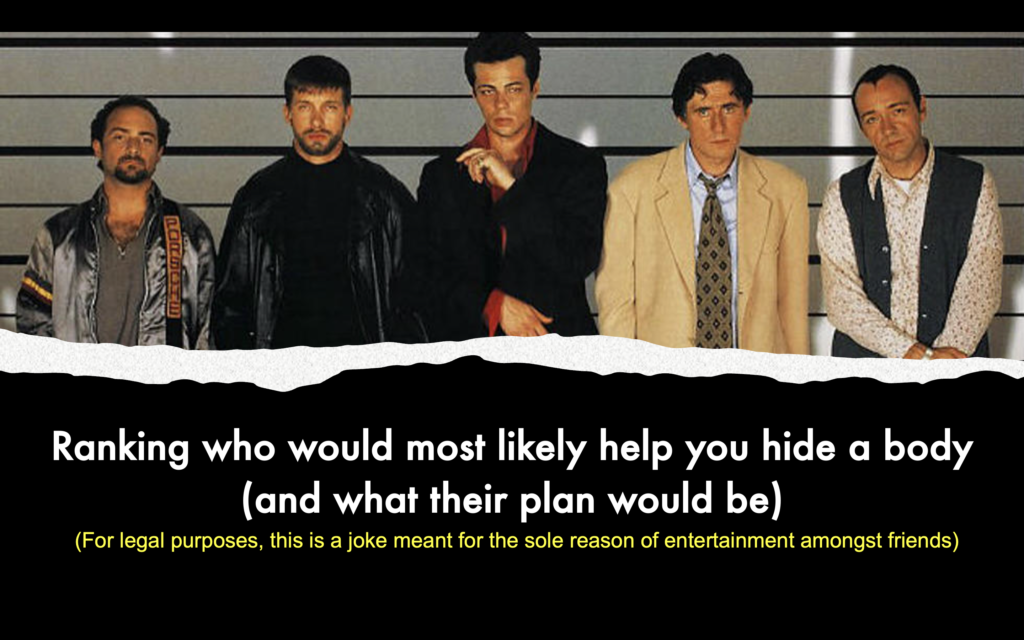 Are you and your friends For-Liffers? Ride or dies? Maybe you think so right now, but would they still be with you when it’s time to get their hands dirty? Okay, maybe they would be willing, but would they actually be helpful?

(For legal purposes, this is a joke meant for the sole reason of entertainment amongst friends)

8. What art period/movement would your friends thrive in? 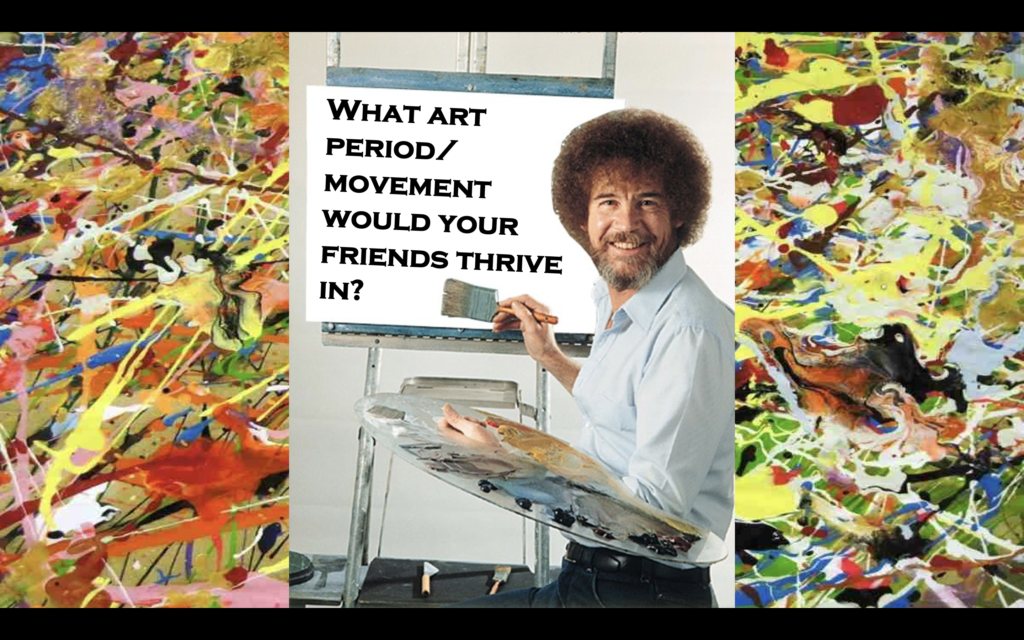 Here’s an interesting PowerPoint topic fit for an art hoe. Whether it be within the art created themselves or the ambience of the world during the period/movement, there is always a place for everyone.

9. Do you give off sinigang or adobo energy? 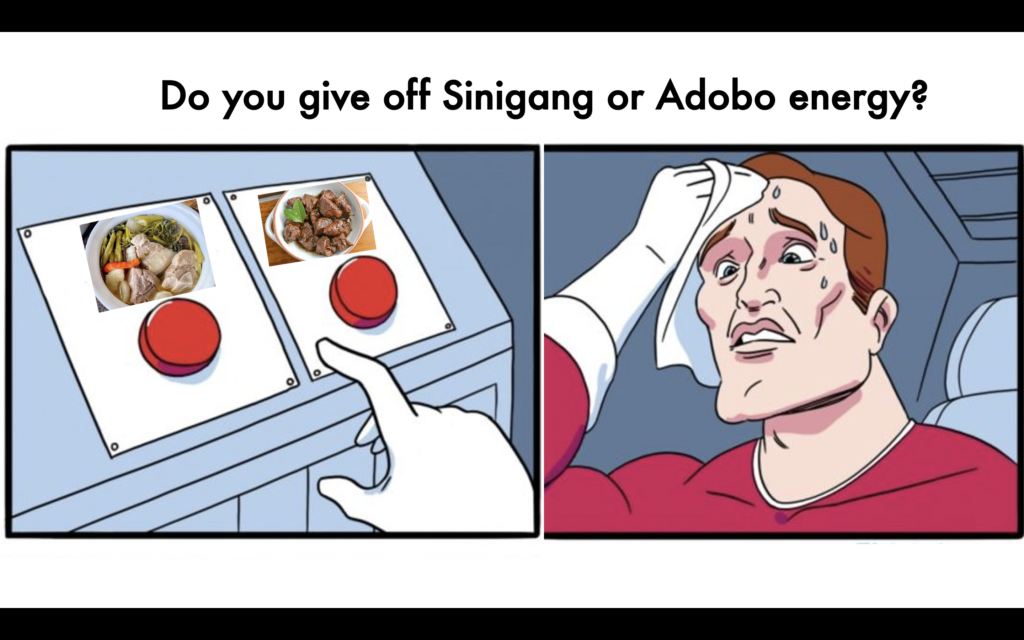 There is no other way to explain it… some people just give off different vibes. What better way to illustrate this than with delicious Filipino dishes?

10. Who your friends’ perfect ka-love team would be (and if they would end up dating off-screen) 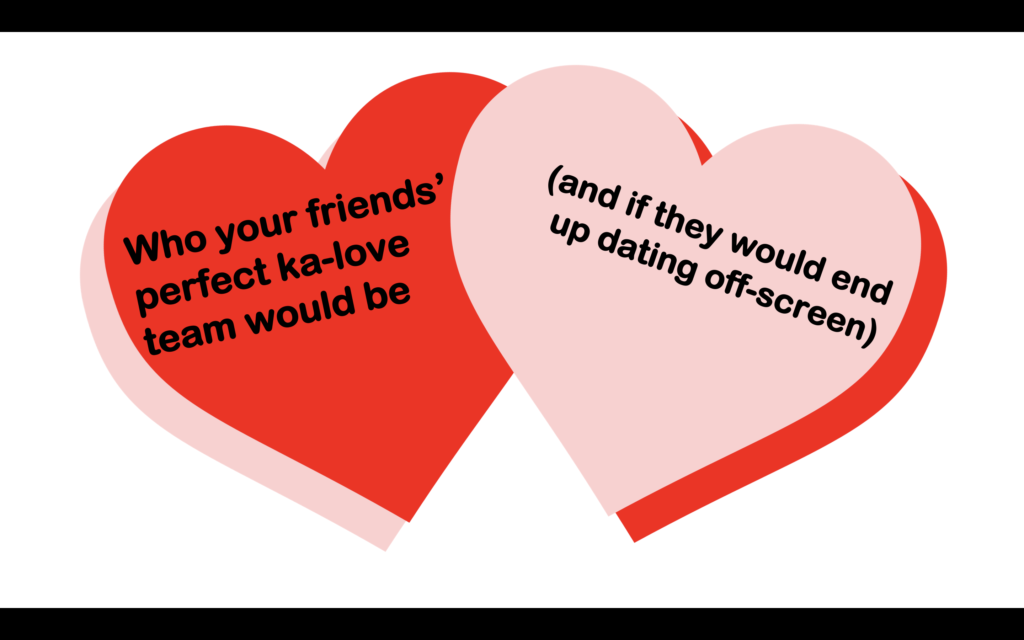 Celebrities are constantly shuffled with one another, trying to produce the on-screen couple with the best chemistry, but what about you and your friends? Matches may be done with celebrities or even among your very own friend group.

And that’s 10, take them or leave them. The whole point of a PowerPoint night is to be as creative as you want and to have fun with your topics (and maybe even have a prize up for grabs to up the ante). So why not give PowerPoint nights a try, they might just become a new tradition in your barkada.

What’s the most creative PowerPoint topic you can come up with? 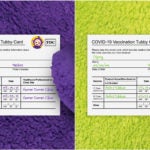 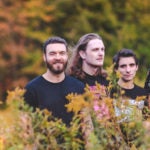