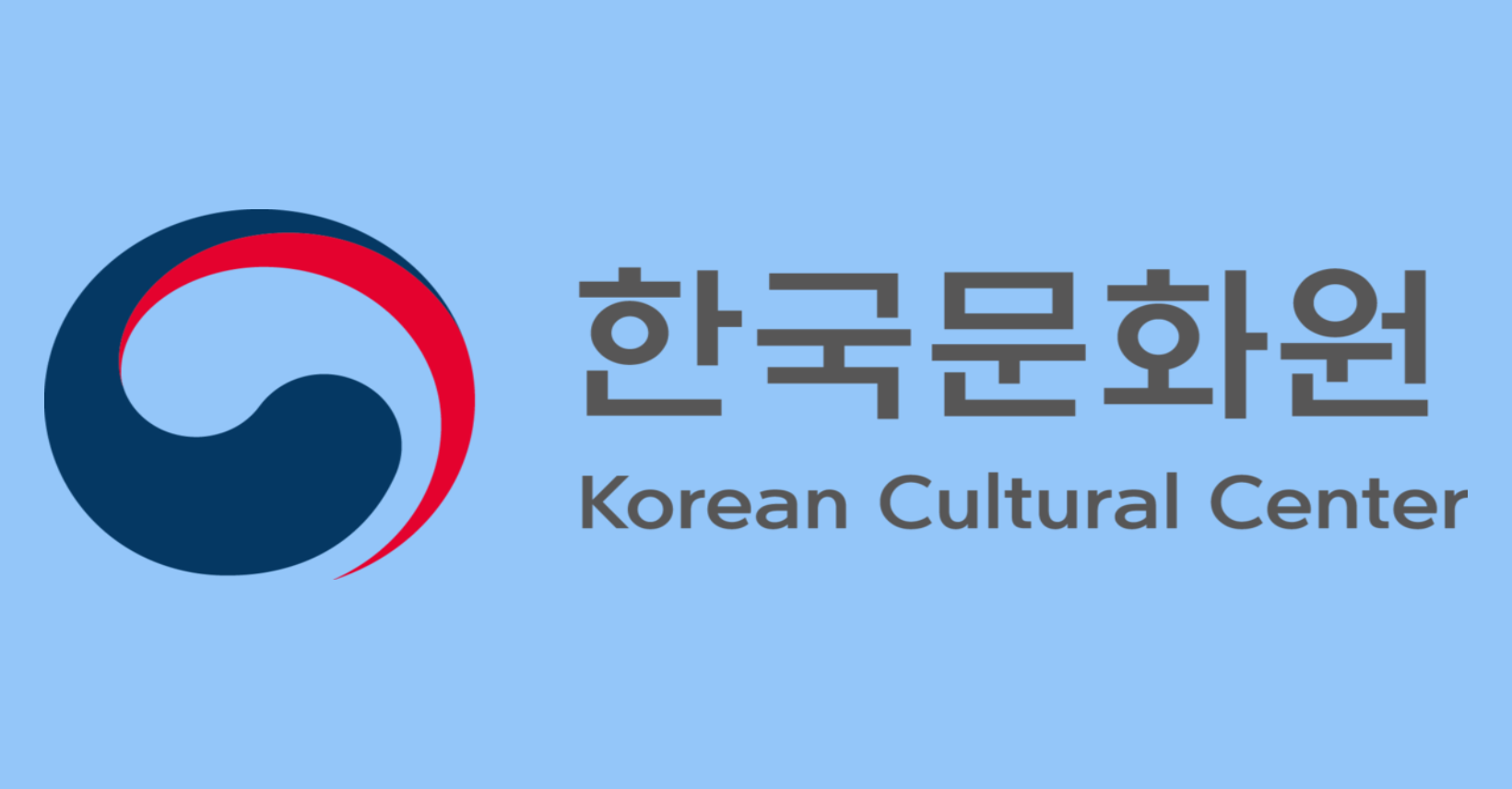 K-Drama enthusiasts, aspiring screenwriters, production students, industry professionals, and general K-Culture followers have another reason and platform to reunite, exchange insights, and learn together as the Embassy of the Republic of Korea and the Korean Cultural Center in the Philippines will be bringing together some of the most seasoned experts for a free webinar!

Following the success of last year’s K-Drama webinar, this year is all about diving deeper into everybody’s favorite pastime by learning how to write an actual K-Drama script and then discovering how these amazing dramas are brought out into the global stage through “Rediscover the Korean Creative Industry: A webinar on K-Drama Scriptwriting and Marketing.”

In partnership with the National Commission for Culture and the Arts and APOP Books and media partners, INQUIRER.net, POP! and KDrama Pal the webinar will be available for free viewing this June 30 at 1pm via KCC’s YouTube Channel. 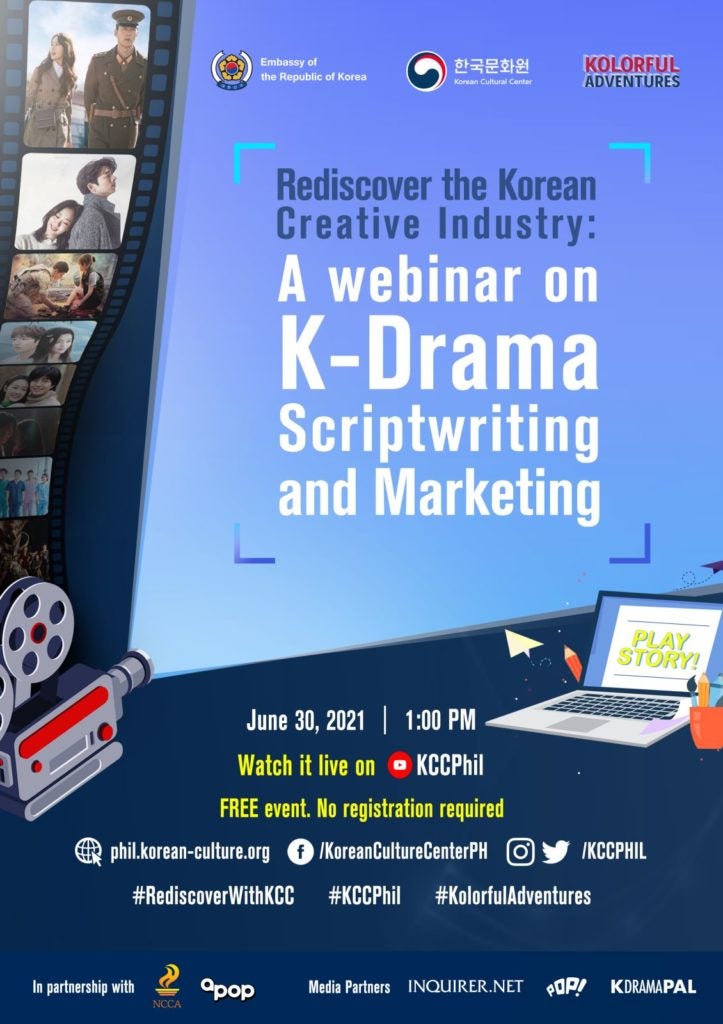 Facilitating the webinar to add more academic and professional insight is Ms. Amor Aljibe, who has been a media professional for over 30 years now and has worked on box office hits and critically acclaimed works that put the Philippines in the radar of international film festivals. She is also an educator who teaches courses on television and film production and recently developed a course on Korean Drama Analysis for the University of the Philippines-Diliman in 2020, which garnered attention from both fans and scholars and was featured by news outlets nationwide.

Following the demand for a follow-up webinar to discuss more on scriptwriting, the first Korean speaker of Rediscover is a multi-awarded Korean script writer in the person of Ms. Park Ji Hyun. She has written a good number of K-Dramas including “All About Eve” in the 2000s, which was also remade by GMA Network in 2009. She has won the Best Writer Award at the KBS Drama Award in 1997, 2001, and 2006 and was also previously a Creative Writing lecturer at Chung-Ang University in 2018. At present, she is a lecturer at the Broadcasting Writers Education Center of the Korea TV and Radio Writers Association. Aside from giving a background about Korea’s Scriptwriting Education Program, she would also be conducting a basic K-Drama scriptwriting workshop for those who are looking at writing their next masterpiece.

Joining the roster of esteemed experts to talk about the K-Drama promotional landscape and the various and tested international marketing strategies of K-Drama production outfits is Mr. LEE Hyo Young. He has 26 years of combined service in KBS media as Digital Business Team Leader, StrategicPlanning Team Leader, Overseas Business Manager, and Entertainment Department Director. He is behind the overseas exportation of the leading KBS dramas such as Winter Sonata, Full House, Boys Over Flowers, Sungkyunkwan Scandal, and Iris. He is also the former Chairman of the Korea Broadcasting Content Export Council and a former Executive Director of Busan Content Market. At present, he is a review and evaluation consultant at the Korea Creative Content Agency (KOCCA) and the CEO of Young & Content Co., Ltd

In order to shed light on the current situation in the TV drama production and screenwriting industry, two acclaimed Filipino director-scriptwriters would be taking part in the webinar. Ms. Rona Co will be covering the discussion of the current effort for the improvement of the local script writing scene. She counts 15 years of TV and film writing experience primarily for the ABS-CBN Network. Those who are keen movie lovers, would be familiar that she co-wrote the box office hit OFW romance film “Hello, Love, Goodbye” as well as the Cinemalaya film “Nabubulok.” She also wrote some of ABS- CBN’s most sought after and top-rating TV dramas namely “Forevermore,” “The Legal Wife,” “Ngayon at Kailanman,” and “A Love to Last,” among others.

Meanwhile, returning in this year’s webinar to discuss the changing narratives during the pandemic and the impact of K-Dramas in the local script writing scene is multi-awarded producer, director and writer for films and television Direk Joey Reyes. Aside from being part of the TV and movie production scene, Direk Joey is also an award-winning essayist and educator at the Department of Communication, College of Liberal Arts at De la Salle University. Presently, he is the Chairman of the Digital Film Program at the School of Design and Arts, De la Salle College of St. Benilde. He is also the Competition Director and Monitoring Head of the Cinemalaya Independent Film Festival and Competition Director for CineFilipino.

Those with curious questions about the webinar may also get the chance to take home special prizes by joining the K-Drama Webinar Q&A Challenge. To participate, all they need to do is comment their best and relevant question regarding the webinar on KCC’s Q&A post (Twitter, Instagram, Facebook), follow all the KCC SNS accounts, tag 3 friends to watch the webinar, and share the post on their account. Three winners with the most unique and interesting questions will be selected per platform to win special and exclusive K-Drama goodies and some goodies from APOP.

This webinar remains to be the Embassy of the Republic of Korea and KCC’s initiative in spearheading the continued enrichment of the Filipino TV producers and scriptwriters in terms of script and production of dramas, through a participative exchange and discussion between keynote speakers from relevant fields and organizations. With the hope of sparking conversation and inspiration for

For more information contact: [email protected] creativity between local and aspiring drama producers, writers, media practitioners, and marketing executives Rediscover is the perfect platform for them to share their knowledge and also learn techniques and processes from their counterparts.

Don’t forget to mark your calendars for “Rediscover the Korean Creative Industry: A webinar on K-Drama Scriptwriting and Marketing” this June 30 at 1pm, streaming exclusively on KCC’s official YouTube channel.

[forminator_form id="331316"]
Tags: Embassy of the Republic of Korea in the PhilippinesK-dramaKorean Cultural Center in the PhilippinesRediscover the Korean Creative Industry: A webinar on K-Drama Scriptwriting and Marketing 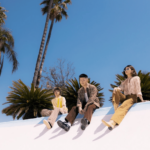 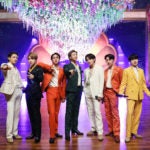