It has been one year since the Coronavirus (COVID-19) pandemic impacted the world, confining people to their homes to avoid the spread and contraction of the deadly disease. To alleviate the ever growing piles of stress placed onto us, the members of the Lasallian Youth Orchestra (LYO) have proposed a solution. Introducing “Quaran-TUNES”: a three-episode production that features different soloist and group performances more in line with something like that of a jamming session rather than a formal concert.

“[Quaran-TUNES] was initially thought of during [one of] our strategic sessions which happened around early to late December of last year,” comments Adriel Amoguis, Company Manager of LYO. The main objective of the event, according to Amoguis, is to “show our audience how musicians like us, how the Lasallian Youth Orchestra, is naturally jamming at home.” Furthermore, the Division Manager for Productions and co-Production head, Ma. Lucia de Mesa, added that “we wanted to connect with our audience, even through [the] online setting, by showing a different side to the orchestra.” 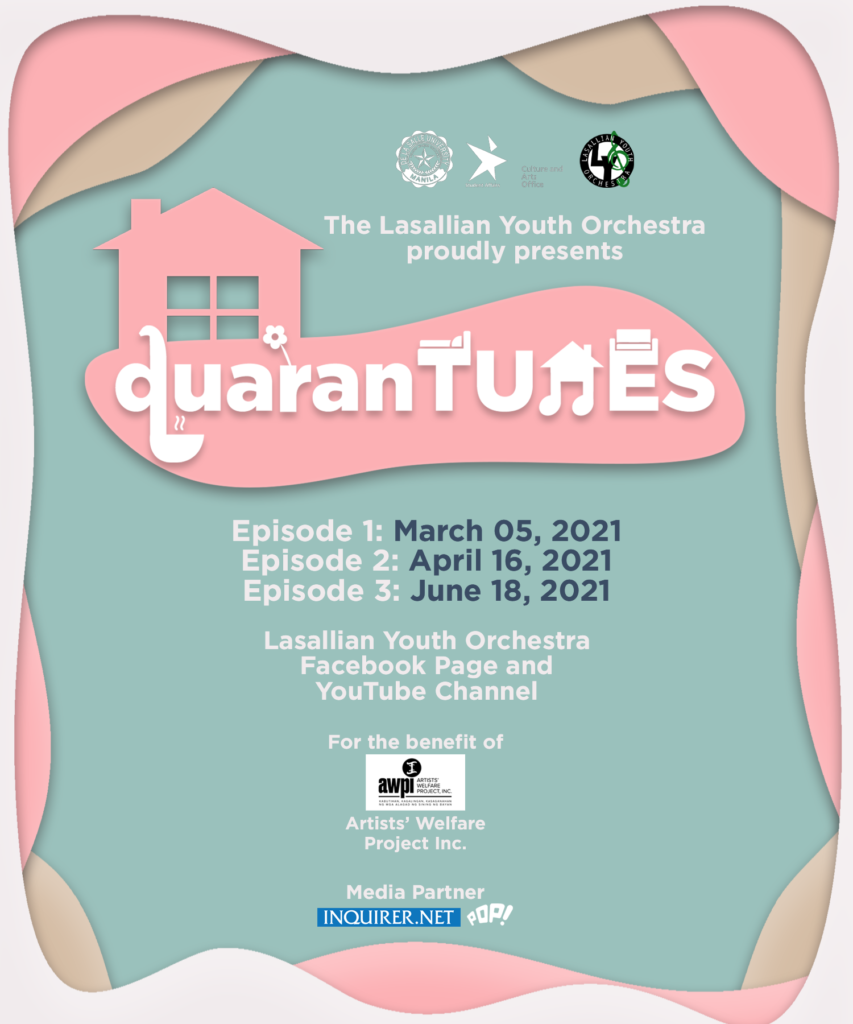 With regards to the type of pieces featured in each episode, de Mesa elucidated how the chosen pieces were cozy and homey to match the feeling of being at home. “So Quaran-TUNES is more mellow and the pieces really aim to comfort, so it is our way of reaching out to anyone who just wants company while studying or working at home or company in general.”

Producing Quaran-TUNES, however, was a difficult task for the team. Officer in Charge for Productions and Logistics and co-Project head Cziana Nicole Balbuena, remarks that communication was the biggest challenge the team had to face. “…It really poses a challenge, regardless of the unlimited channels we are able to access, especially since we are really used to face to face productions…,” she highlighted. Nonetheless, they were able to overcome this through regular checkups with the orchestra members for updates on their progress. Balbuena and de Mesa were also aided by their co-executive board members along with members from the production and logistics committee.

In line with the organization’s vision for the members’ talent and music to broaden their audience, the Division Manager for Marketing, Jeanelle Rodriguez, stated that they “reached out to multiple organizations outside and inside DLSU” to gather more support—garnering a total of 28 partners.

As a result, their music was able to reach other universities like the University of the Philippines and Ateneo de Manila University, while procuring support from friends and family. “It’s just nice to hear that our music is not only based within La Salle, but it also reaches the ears of other people as well,” Rodriguez stated.

Another goal of the organization was to establish an event wherein the audience can give back to society. According to Rodriguez, “we want to use this platform that we have to be that avenue for them to relay to artists in need.” This led them to partner up with the Artists’ Welfare Project Inc. (AWPI) as their beneficiary.

AWPI is a SEC-certified NGO that gathers different Filipino artists; they execute various activities in order to raise funds to provide aspiring Filipino student artists in need to continue and pursue their passion for music which aligns with the organization’s vision is to spread their love for music and help aspiring musicians to excel. As Rodriguez puts it, “music is for everyone so why just limit it to what we have to offer when we can support others as well.”

As of writing this article, the LYO has officially released their first ever episode of Quaran-TUNES back in the fifth of March.

The pieces that were played were “Breezin’” by George Benson, “Don’t Know Why” by Kenny G, “Overjoyed” by Stevie Wonder, “My Dearest” by supercell/ryo, “Liebestraum no. 3” by Franz Listz, and lastly “Someday my Prince will Come” by Frank Churchill.

Episode one shines the spotlight on the rhythms section composed of Ana Declaro on bass, Isaiah Perez and Gibson Diwa on guitar, Mark Dizon and Nathaniel Guevarra on drums, and Jewel Vinson, Francesca Reyes, Grant Bulaong, and Adriel Amoguis himself on the piano.

Also featured are the orchestra’s very own string section and Resident Conductor Mr. German de Ramos on the saxophone as well as a collaboration with Iman Cristal and Bea Carlos from the DLSU Innersoul.

If you missed the first episode, do not worry! The second episode will premiere on the sixteenth of April while the last episode premiers on the eighteenth of June. “We have an assortment of genres available to you for the next upcoming episodes, as well as a collaboration with another group from the Culture and Arts Office,” Balbuena stated. “Again we won’t indulge in the details but I think for you to find out and get to know more about the orchestra, it really is a must for you to watch the upcoming episodes.”

Take a break and jam with the first episode of Quaran-TUNES found in this link: https://bit.ly/EP1_QuaranTUNES

To support the Artists’ Welfare Project Inc., the official donation form can be found here: http://bit.ly/Quaran-TUNES_Donation-Form