Mogwai are proud to release their new single “Ritchie Sacramento”, the second song to be taken from their forthcoming tenth studio album As The Love Continues. The track was premiered by Mary Anne Hobbs on BBC 6Music. Supported by quietly melodic vocals, “Ritchie Sacramento” oscillates between moments of tranquility and disorder. The track’s video was created within the Unreal Games Engine by director Sam Wiehl, who has previously collaborated with Ladytron, Forest Swords and the Valentino fashion house, and created a small first person multi level computer game for the song, which then formed the animations and narratives for the video.

Mogwai’s Stuart Braithwaite says: “Ritchie Sacramento’s title came from a misunderstanding a friend of ours had about how to say Ryuichi Sakamoto. The lyrics were inspired by a story Bob Nastanovich shared about his friend and bandmate David Berman who proclaimed “Rise Crystal Spear” as he threw a shovel at a sports car. The song is dedicated to all the musician friends we’ve lost over the years.” 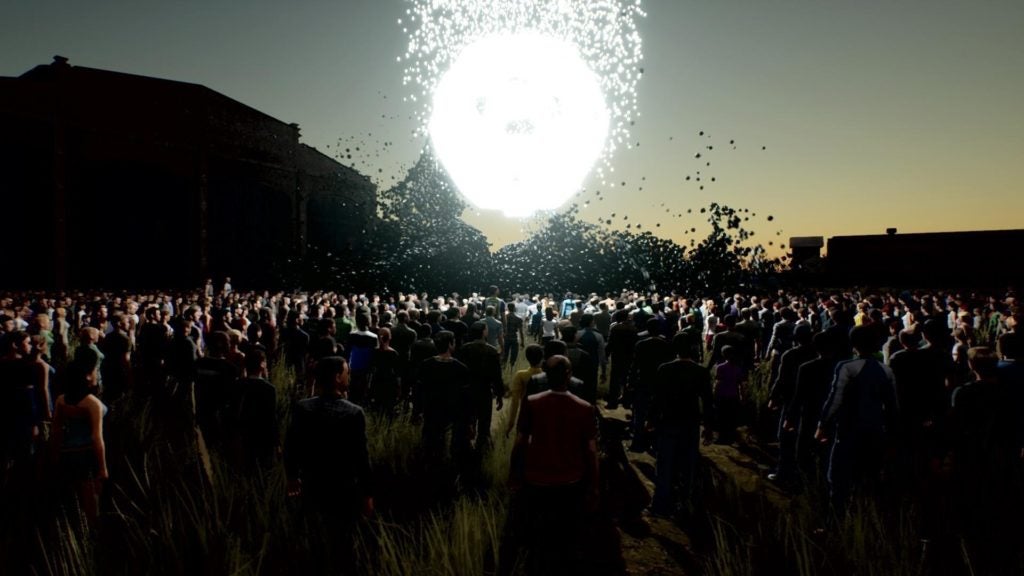 “Ritchie Sacramento” follows previous single “Dry Fantasy”, a celestial song built around a reverberating synth repetition. The track is accompanied by a video directed by Vaj.Power which draws interspersing images of blossoming flowers with the gnarled surfaces of a distant planet.

Mogwai will be premiering a very special live performance of As The Love Continues, performed and recorded at Tramway in their hometown of Glasgow. The performance will be broadcast worldwide at 8pm GMT, Saturday 13 February 2021. Directed by the band’s long term collaborator Antony Crook, the broadcast will be the first opportunity to hear the new album in full alongside highlights from the band’s formidable back catalogue. Tickets are on sale now and available at www.mogwai.scot.

The album release follows on 19 February via Rock Action Records, and is available to pre-order and pre-save now in various formats, including digital, CD, double vinyl, a special edition box set that includes the CD, coloured double vinyl LP, special single vinyl pressing of five album demo tracks, and a photo book – there will also be a CD only version of this special edition box set available. As The Love Continues was recorded earlier this year with producer Dave Fridmann and features contributions from Atticus Ross (track 8 “Midnight Flit”) and Colin Stetson (track 9 “Pat Stains”).  As The Love Continues will arrive 25 years on from the release of the band’s debut single ‘Tuner’/’Lower’. Pre-order As The Love Continues here.

On 22 February, Mogwai will team with Rough Trade to present an Interactive Live Stream Q&A, joined by special guest Ian Rankin for an intimate conversation, with an opportunity for audience questions.

As The Love Continues was originally planned to be recorded in America, but the pandemic led to a relocation to Worcestershire and with producer Dave Fridmann separated by an ocean and appearing like an Orwellian oppressor. This pandemic necessity was quickly routine, it also bought them a little more time.

Unable to perform the album for the time being,  Mogwai’s Stuart Braithwaite hopes the music can take you from somewhere different to where you are, “unless you are somewhere really amazing and then why are you listening to some weird music like this?”

Mogwai have advanced without a plan since they were teenagers, there have been no secretive meetings to work out the master plan. It is rare to hear a band that has been going for this long, and have this many albums behind them – ten records in and still no disappointments or mistaken creative left turns.

You may know what to expect, but you will never get the same. Both transcendent and surprising,  As The Love Continues shows that Mogwai are still offering solace from the mundane, supplying the soundtrack to whatever movie you are making in your head.

As The Love Continues is the follow up to 2017’s Every Country’s Sun, Mogwai’s second top 10 album in a row after 2014’s Rave Tapes. In between the band released a career-spanning retrospective Central Belters and collaborated with filmmaker Mark Cousins to soundtrack his documentary Atomic. Earlier this year, they released the soundtrack to the Sky Original drama ZeroZeroZero, available for its first week exclusively on a pay-what-you-can (PWYC) basis via Bandcamp, with half of proceeds going to Help Musicians and NHS charities.