With face masks optional and people keen to avoid packed public transport, the first lockdowns in spring 2020 turned the humble bike into the ultimate means of claiming back freedom. And bikes clocked up plenty of miles in 2020, whether for work or for leisure, with, as a consequence, a shortage of new bikes on a global scale. Plus, the public health crisis spurred cities around the world to promote cycling.

Suddenly, the bike had a new virtue to add to its already impressive list of plus points, mostly linked to its status as an alternative and sustainable means of transport. Now, as well as being economical, low pollution, congestion-beating and sporty, cycling is also COVID-19-safe.

Back in March, Claudia López, the Green Alliance mayor of Bogotá, hit hard, creating 22 kilometers of cycle lanes in the space of just one night. Talk about an overnight cycling revolution. This was soon mirrored in Rome (150 kilometers), Bologna (94 kilometers) and Lisbon (77 kilometers), to name just a few of the Southern European cities freshly embracing cycling as a result of COVID-19 restrictions.

City authorities went about encouraging urban dwellers to leave their cars at home and hop on their bikes by creating makeshift infrastructure, sometimes dubbed “corona cycleways.” These cycle lanes may have been created hastily, but they reshaped city centers and redefined the ways of getting around them. Adding an extra dose of irony to 2020, a year full of paradoxes, the stuffiest city officials suddenly claimed to be completely onboard with the concept of tactical urbanism, initiated by green activists in San Francisco in the 1970s. And this experience has shown that we are, in fact, capable of making changes quickly (although not always well) to bring about what was previously thought to be long and complicated to achieve: creating cycle lanes in an instant, decommissioning parking bays, pedestrianizing streets or even whole neighborhoods. 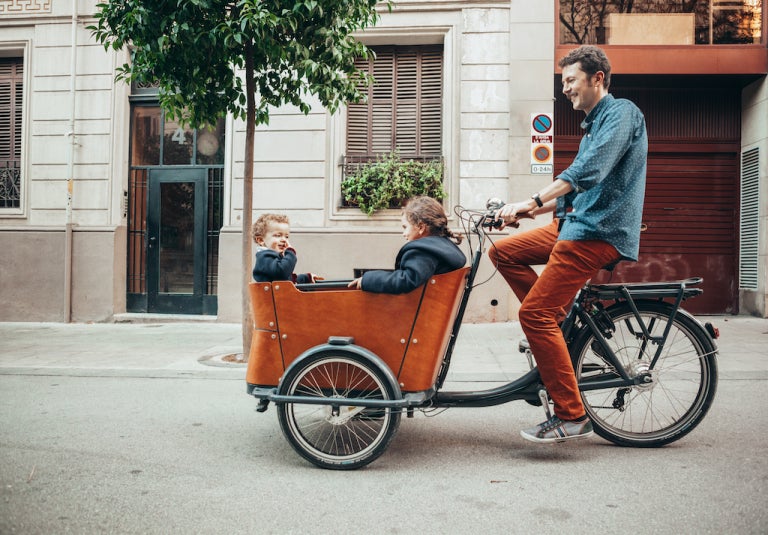 A long and troubled road in France

In France, things didn’t get off to a great start for bikes when the first lockdown hit in March 2020. Olivier Schneider, president of the French Federation of Bicycle Users (FUB), recalls the extraordinary chain of events.

“The sports ministry and the interior ministry were talking about how people should avoid cycling as much as possible, that it was forbidden for leisure purposes. As a result, cyclists acting in good faith, armed with duly completed certificates of exemption, rode to work or went [grocery] shopping and found themselves being issued with fines. The FUB received more than 1,200 accounts of this kind,” he said.

April 2, the association applied to France’s Conseil d’Etat, the supreme court for administrative justice, for emergency measures to address the potential infringement of civil liberties. In a very rare decision, the procedure proved successful, and the government had to go back to the drawing board. In fact, in May 2020, the minister for Ecological and Inclusive Transition, Elisabeth Borne, launched a new cycling action plan that’s more ambitious and unique in Europe, according to the European Cycling Federation (ECF). This included financial assistance for local authorities to create infrastructure and parking facilities for bikes, courses to get people back in the saddle, a €50 incentive for bike repairs (which will run until March 2021) etc. The aim was to boost cycling as the country emerged from its eight-week lockdown. And the results speak for themselves, with more than a million bikes repaired, and a concrete example of the circular economy, creating 500 jobs.

“An Opinion Way study shows that more than half of the beneficiaries started or got back into cycling thanks to this incentive,” adds Schneider.

Moreover, the practice of cycling has increased by over 30% (figures from the Vélo & Territoires association, based on over a thousand sensors in France). One remarkable change seen this year is the increase in cycling in rural and peri-urban settings (while cycling has been continuously gaining ground in large cities in France for the last 15 years).

Pedestrians and cyclists, on the same side

All over, bikes are gaining ground to the detriment of cars thanks to solutions seeking to reserve entire portions of the urban space for cyclists and pedestrians. In Brussels, for example, the city center is a priority zone for pedestrians and cyclists with a 20 kilometers per hour speed limit for buses and cars. Promoting cycling also helps fight urban congestion and limit global warming, while simply making city centers more pleasant places to be.

In Paris and its inner and outer suburbs, a total of 166 kilometers of corona cycleways were created in 2020, compared to the 700 kilometers already in existence. The Mayor of Paris, Anne Hidalgo, has already pledged to maintain 50 of these in the capital. Similarly, in Barcelona, the 21 kilometers of temporary cycle lanes are due to be set in stone or asphalt. This temporary infrastructure, which cropped up all around the world, is now destined to stay because it proved a hit with the ever-growing numbers of users. In fact, cycling gained plenty of new recruits in 2020. In Bogotá, the percentage of cyclists has doubled.

Healthy emulation among the world’s cities

After circumstantial enthusiasm and necessary pragmatism, we have now entered a phase of major projects. With the pandemic serving as an accelerator and awakening consciences, now is the time to act quickly to tackle another, more perennial kind of crisis: the climate. Right now, it’s as if the world’s major cities are all simultaneously setting themselves huge urban challenges, envisaging ambitious long-term programs in which cycling takes center stage.

The Hague, the administrative capital of the Netherlands, for example, wants to make cycling its principal means of transport. And the city is pledging means that are as great as the challenge, to the tune of €65 million over five years to develop the necessary infrastructure. The aim is to double the number of cyclists by 2040.

London is another an interesting example. Between July and September, residents made 37% of their journeys on foot or by bike (helped by exceptionally clement weather). As a result, air quality improved significantly and the public body Transport for London (TfL) has now committed to investing GB£75 million over six months to further boost journeys on foot and by bike.

Nothing seems to be able to stop cycling on its upwards course, with bikes brought to the forefront of the scene in 2020 by the novel coronavirus.

“We have stopped looking at cycling in a condescending way, it is now seen as a promising and credible sector. Even business angels are investing in it!,” concludes Schneider. Make no mistake, in 2021, cycling is set to rule the road. JB

Oyster shells given new life as reefs off Texas coast