The devastation of Typhoon Ulysses is still very apparent and the wrought continues to unravel in Cagayan and Isabela after it hit the country. It is heartbreaking to see the images of people who pleaded and cried to receive help since it’s been weeks after the typhoon has ravaged them. This pushed Titik Poetry, a Cavite-based art collective, to take action.

They went out of their way to show bayanihan by calling for donations, callouts to other organizations, and organizing a charity show to provide entertainment and relief. 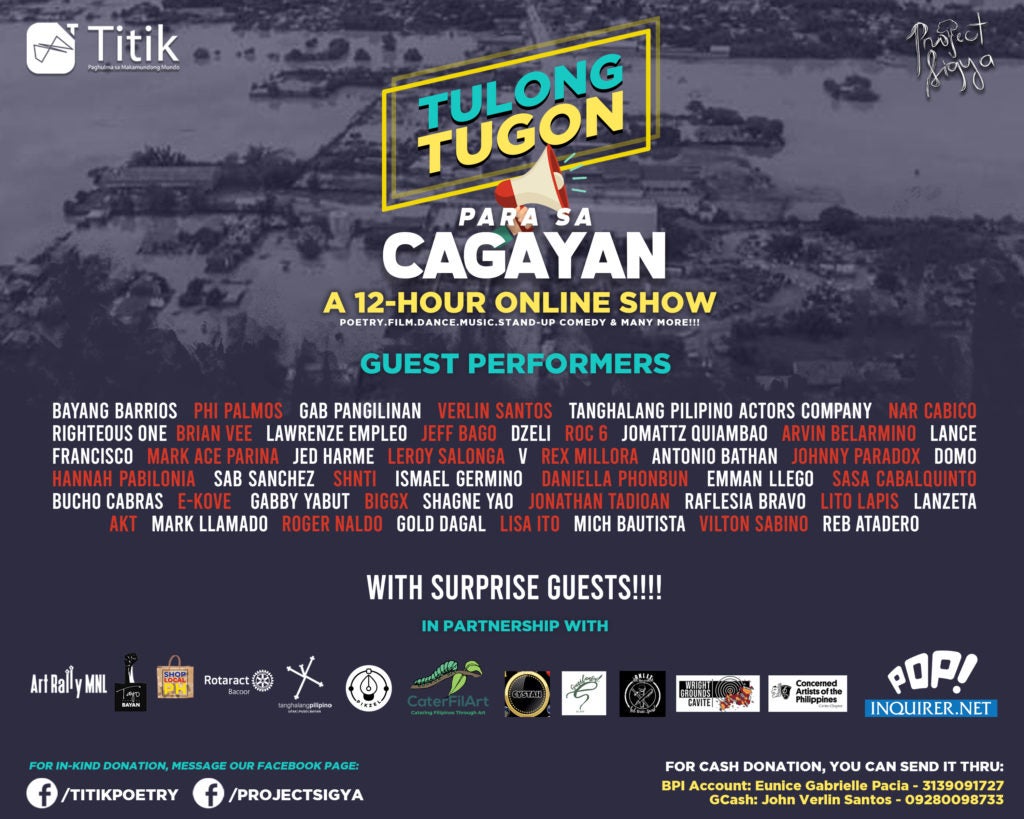 As the people in social media slam the government’s accountability and inaction in helping the evacuees, artists, musicians, and actors have come together for a 12-hour online show that raised more than 36,000 pesos.

Tulong-Tugon has extended relief efforts for those who are devastated by the calamity through the collected funds together with other organizations such as Tayo Para sa Bayan and Project Sigya.

This project is a creative campaign of the organization to get people to help the community by offering initiatives through arts. The show was held via Facebook live last November 16 at the Titik Poetry’s Facebook Page from 12 noon to 12 midnight.

The proceeds of this event have been donated to the victims of typhoon Ulyssess in selected areas of Cagayan and Isabela. Few days after this project, Titik Poetry also gave coloring books for the kids in Kasiglahan, Rizal.

ART FROM THE HEART

Local artists around the Philippines have pulled their resources together and offer their services to raise funds and donate to those most severely affected. Verlin Santos, founder of Titik Poetry, humbly said that this kind of project they are doing is just one among the thousands happening all over the country. But, through this collaborative effort, the sum of their combined initiatives amounts to something as each of them contributes their talents for the greater good.

“Hindi kami artists lang na nabuhay para magtanghal sa entablado. Mas malaki ang gampanin namin sa lipunan,” Verlin said as he shared that since then, the fire in the heart of the art community to help is undying.

Volunteerism isn’t new to their team. Tulong-Tugon also helped the victims of the Taal Volcano eruption and reached out to the fire victims in Sineguelasan Bacoor, Cavite. This is just one of their community projects inside the organization.

Verlin also utters that using your own skills and taking an action when disaster strikes in your own capacity is in itself a form of heroism and everyone can do it in their own ways. For them, they will use their performances as their platform to serve the cause of helping others by lighting back the hope in the dark city through arts. This is a manifestation that even the pandemic can’t paralyze them from helping those who are in need.