Follow us:
Annual coffee consumption is around 8.2 kilogram per capita in Sweden. Image: IStock/Geber86 via AFP Relaxnews.

Take a break: How to have a breather like a local from Sweden to Japan 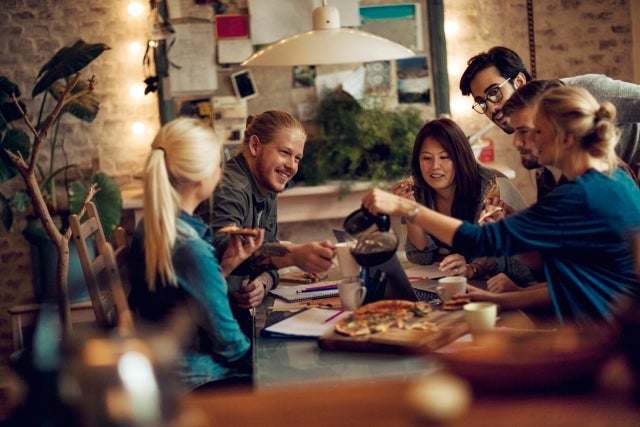 Annual coffee consumption is around 8.2 kilograms per capita in Sweden. Image: IStock/Geber86 via AFP Relaxnews.

With COVID-19 restrictions and many people working from home, the coffee break is, more than ever, a sacred moment for socializing and catching up with colleagues, as well as eating or drinking something for a pick-me-up. Here’s a look at some of the world’s different traditions when it’s time to “down tools” and take a break.

Take a fika break in Sweden

The coffee break is something of an institution for this Scandinavian nation. In Sweden, where annual coffee consumption is around 8.2 kilograms per capita, this sacrosanct moment is referred to as “fika” and is even enshrined in law: for every hour worked, Swedish employees get five minutes of fika break.

Fika break culture is so strong in Swedish society that it extends beyond the realm of work. People also talk about fika when meeting with friends or family for a light meal or snack, always accompanied by a hot drink. In fact, for fika to be fika, the break has to be shared with others. The term comes from the Swedish slang word “kaffi,” originating in the 19th century. The syllables were then switched around to form the back-slang word, fika.

Head out for a smoko in Australia and New Zealand

It may be one of the countries that has cracked down the hardest on smoking, but break time in Australia is often associated with the idea of stopping work for a few moments to smoke a cigarette. The term comes from the contraction of “smoke-oh,” used in British Merchant Navy jargon during the latter half of the 19th century.

Down Under, the tradition of the smoko was largely kept going by laborers in the countryside, such as sheep shearers. The break takes the form of a snack and a cigarette between breakfast and lunch. As the Australian authorities clamp down on the sale and consumption of tobacco, the smoko in its traditional sense is on the wane. Yet it lives on in New Zealand, where it was first practiced by farmers and manual laborers. Plus, over time, smoko has become a more general way of talking about taking a short break from work in the office.

Make time between 2 p.m. and 4 p.m. for Oyatsu, which means “the eighth period of the day” in Japanese. From Tokyo to Fukuoka, the Japanese boost their energy with a pick-me-up to shake off sleepiness until it is time to head home. This usually involves snacking on fruit and other sweet treats. There is no shortage of options given the profusion of snack foods, like KitKat bars, found on every street corner to help boost your blood sugar. And fear not, those with a preference for savory flavors can still snack on saltier, umami delights during this afternoon break. But where is the coffee in all that? While the oyatsu break is all about snacks, the tradition does not necessarily involve pairing them with a coffee or green tea.

“Merienda” means afternoon snack in Spanish. This break time is indispensable in Argentina, where dinner is often not served before 10:30 p.m.. It is, therefore, not out of the ordinary to grab a little snack at around 6 p.m. But that is not the only reason. This tradition dates back to the end of the 19th century and the mass arrival of people from Spain and Italy. This snack break usually involves sipping the local drink, mate, originally prepared from leaves by the indigenous Guarani people. The national specialty, dulce de leche, is often on the menu too, together with pastries and toast. Argentinian families might also serve medialunas, a kind of hybrid pastry that is part croissant, part brioche. CC

Among businesses, small-time food services may be next big thing