Follow us:
Banksy's 'Show Me the Monet' is expected to fetch between three and five million pounds ($3.9 to 6.5 million) at the Sotheby's 'Modernités / Contemporary' sale. Image: Banksy via AFP Relaxnews. 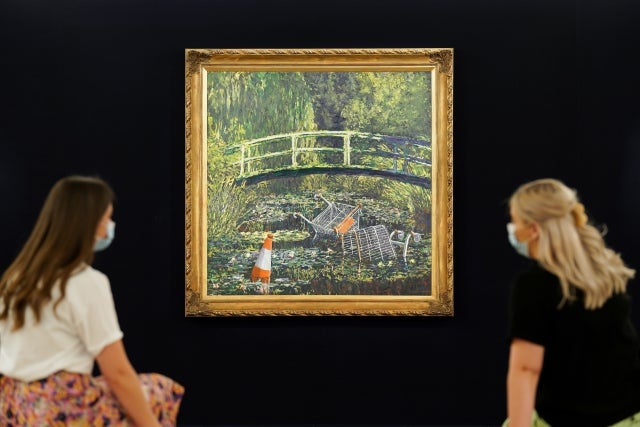 Banksy’s ‘Show Me the Monet’ is expected to fetch between three and five million pounds ($3.9 to 6.5 million) at the Sotheby’s ‘Modernités / Contemporary’ sale. Image: Banksy via AFP Relaxnews.

The unlikely association of Banksy and Claude Monet will soon be attracting the attention of art collectors from around the globe.

Sotheby’s is preparing to sell “Show Me the Monet” by the British street artist as part of its Modernités/Contemporary auction, which will be streamed live from Paris and London on Oct. 21. Ironic as it may seem, the canvas on the excesses of consumerism will likely be sold for several million pounds.

Dating from 2005, “Show Me the Monet” is one of a series of oil paintings entitled “Crude Oils” in which Banksy reinterpreted several famous paintings by Vincent van Gogh, Edward Hopper and Andy Warhol.

As the name suggests, “Show Me the Monet” is largely based on “The Water Lily Pond” by the French impressionist, which the British street artist reworked by adding shopping carts and a traffic cone into the peaceful setting at Giverny.

“Recent years have seen a host of seminal Banksys come to auction, but this is one of his strongest, and most iconic, to appear yet,” pointed out Alex Branczik, Sotheby’s European head of contemporary art.

However, the bidding may go much higher as it often does with works by Banksy. Last October 2019, another painting by the artist, “Devolved Parliament”, finally sold for 9.9 million pounds (around $12.1 million or P614.5 million), which was five times the initial estimated sale price.

Will Banksy be forced to give up his anonymity?

The sale of “Show Me the Monet” may also benefit from a renewed enthusiasm for Banksy prompted by a recent ruling of the European Office for Intellectual Property (EUIPO).

The British artist effectively lost a long-running trademark dispute with a greeting card company over his “Flower Thrower” graffiti, because the European authority judged that his anonymity prevented him from being formally identified as the author of the work.

“The predicament of Banksy’s right to the work ‘Flower Thrower’ is clear. To protect the right under copyright law would require him to lose his anonymity, which would undermine his persona,” as per the EUIPO ruling published on Sept. 17. It follows that he “cannot be identified as the unquestionable owner of such works as his identity is hidden.”

Many specialists are now wondering if in the light of this decision Banksy will ultimately be forced to reveal his identity to affirm his exclusive ownership of his works. CC