New show date for Boys Like Girls Live in Cebu

Cebu is in for one incredible rock show. PULP Live World and Skesh Entertainment are excited to bring Boston favorites BOYS LIKE GIRLS in the Philippines after more than a decade! BOYS LIKE GIRLS LIVE IN CEBU has been given a new date given the current global health situation and is happening next year: September 15, 2021 at the Sky Hall Seaside Cebu.

It will be a show that’s sure to trigger nostalgia with Martin Johnson (vocals/guitar), Paul DiGiovanni (guitar), John Keefe (drums), and Morgan Dorr (bass) playing their iconic debut album front to back. Released back in 2006, the self-titled Boys Like Girls carried songs that served as the soundtrack to the coming of age of a distinct generation of pop-punk/pop rock fans. It was an album that allowed the band to break through the music scene, with hits like “Hero/Heroine,” “The Great Escape,” and “Thunder” spending weeks on Billboard charts. 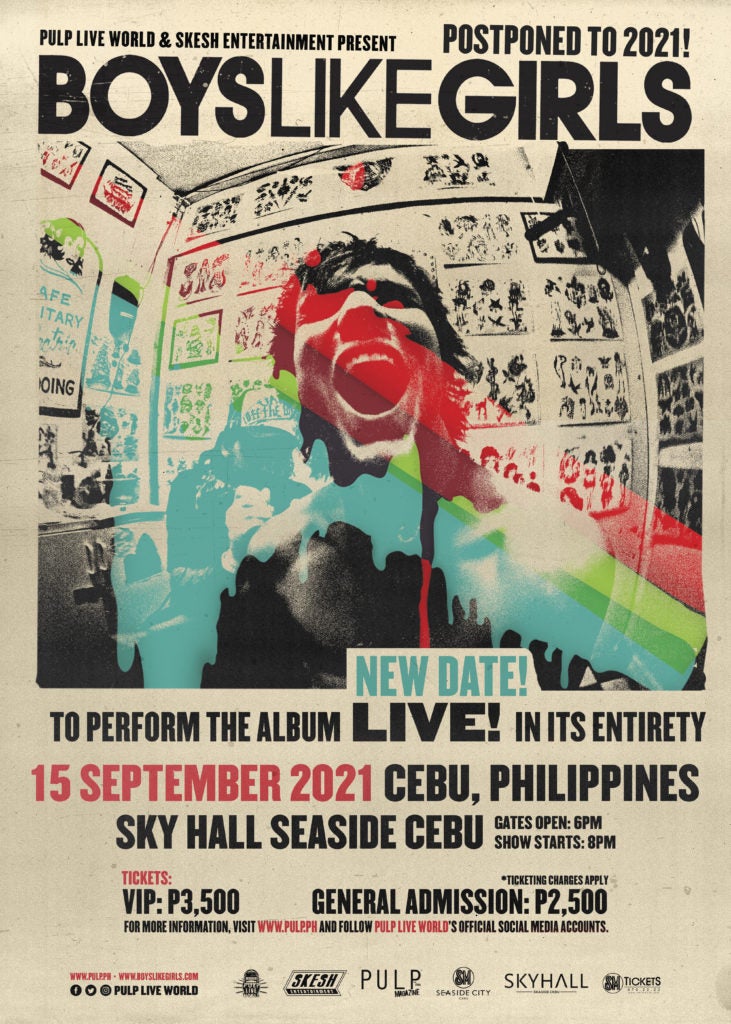 As iconic as the band was at the time just for this album alone, this debut release was soon followed in 2009 by Love Drunk, with more anthems for fans to sing along to like the title track “Love Drunk,” “She’s Got A Boyfriend Now,” “Heart Heart Heartbreak,” and “Two Is Better Than One” featuring Taylor Swift.

It comes as no surprise that, in the latter part of 2019 following years of inactivity, fans were ecstatic upon hearing the news that Boys Like Girls would be hitting the road on their first headlining tour in ten years, officially announcing five dates in Australia slated for April 2020. This exciting news followed years of inactivity, with the band’s third and most recent album Crazy World (“Be Your Everything,” Life of the Party,” “The First Time”) coming out way back in 2012.

Boys Like Girls had a short tour in 2016 to celebrate the 10th anniversary of their debut album and are now looking to make an extension of that celebration by setting their sights outside of the US, in other corners of the world that they missed to include. Before they head over to Australia for their first tour in a decade, the band is stopping by Asia for their first shows in years. 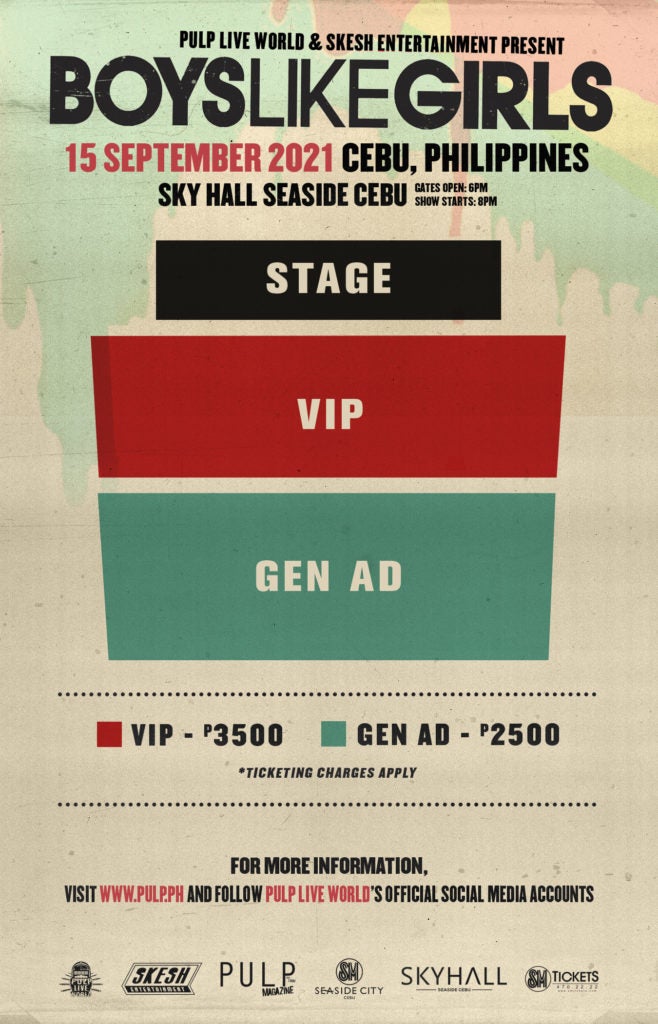 BOYS LIKE GIRLS LIVE IN CEBU happens on September 15, 2021 at the Sky Hall Seaside Cebu. This show is powered by PULP Live World and Skesh Entertainment. Gates open at 6:00 PM and we rock and roll by 8:00 PM. For tickets purchased last February, they will still be honored on the new show date. For those who would like to opt for a refund, you may contact SM Tickets for further assistance. Tickets will still be available at SM Tickets outlets nationwide and online (www.smtickets.com). Prices are as follows: VIP – P3,500; General Admission – P2,500. Ticketing charges apply.