The Canadian Chamber of Commerce of the Philippines (CanCham) has announced it will celebrate Canada’s National Day on Wednesday July 1 with a virtual program accessible by the public on Facebook and YouTube. It will start at 6:00 pm (Philippine Time) that day. 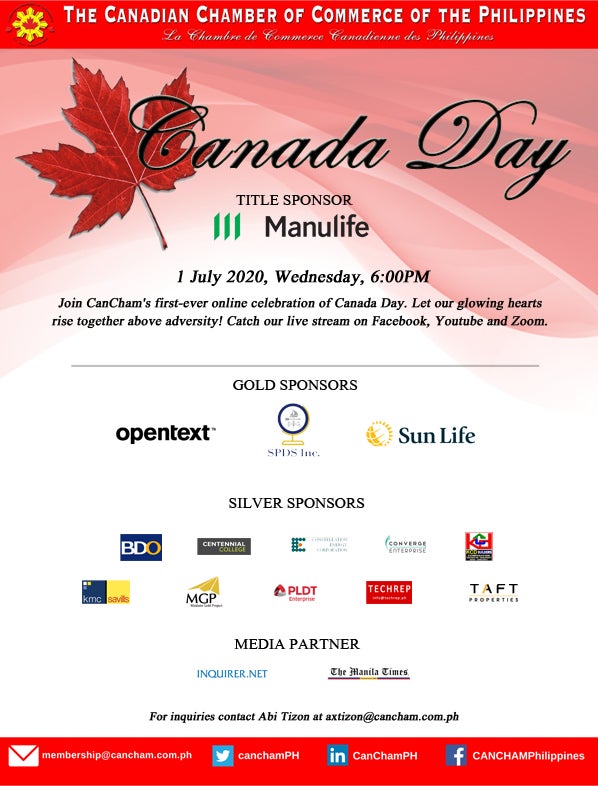 The President of CanCham, Mr Julian Payne, enthused that this will be the first time CanCham will be presenting a virtual Canada Day program, noting “This has the great advantage that it can be enjoyed free by all in the Philippines and Canada who have access to social media”.  He invites all interested in Canada to enjoy perspectives of Canada that will be presented and  “… hoped it would provide some relief and enjoyment for those having to stay at home under the quarantines”. CanCham members in both countries will also have an exclusive access through a ZOOM webinar with which they can send chat messages.

Mr. Payne elaborated that the range of video presentations will showcase examples of arts and sports from Canada’s several provinces and its  multicultural heritage.  “It will include iconic scenes,  such as from Le Cirque de Soleil (from the Province of Quebec) and the Calgary Stampede (from the Province of Alberta), as well as highlights of the Toronto Raptors winning the NBA championship in 2018 (from the Province of Ontario). There will also be videos on the art and music of Canada’s indigenous peoples and, to recognize Scottish immigration to Canada, a Highland bagpiping competition between a piper from the Canadian Embassy in the Philippines vs a piper from CanCham”.

Canada Day
Canadian Chamber of Commerce of the Philippines
INQPOP! Stories we think you might also like: