International Museum Day has been celebrated every May 18 since 1977 to recognize how museums contribute to sharing and enriching cultures, and to stress the impact museums have on building understanding among people.

While museums around the world have closed down due to the coronavirus pandemic, some remain open in the online sphere. Take part in International Museum Day with these museums gone virtual, abroad and in the Philippines.

The Guggenheim Museum specializes in modern and contemporary art. The building itself is an architectural landmark, with its iconic Atrium resembling a shell and connecting the galleries. View its exhibits and unique interiors via Google Arts and Culture.

Rijksmuseum is a Dutch national museum that covers the art and history of the Netherlands. It houses masterpieces by art icons such as Rembrandt and Johannes Vermeer. Appreciate the galleries of paintings and its grand and colorful interiors on Google Arts and Culture.

The Louvre is the largest art museum in the world and is the most visited museum too, as per the 2018 Museum Index. While you may not be able to fly to Paris to check it out, with or without a pandemic, you may still visit the Louvre’s website for a selection of its virtual tours.

The British Museum, founded in 1753, declares that it is the first national public museum of the world. It made over four million objects and 1.9 million images available for free on its website on April 28. You can also take a virtual tour through Google Arts and Culture.

Space Center Houston is a leading science and space exploration learning center. It has space artifacts and exhibits on American spaceflight, which can be viewed on its website. Popular attractions include the Astronaut Gallery, which houses Apollo 12, Apollo 7 and Apollo 11 astronauts’ space suits. 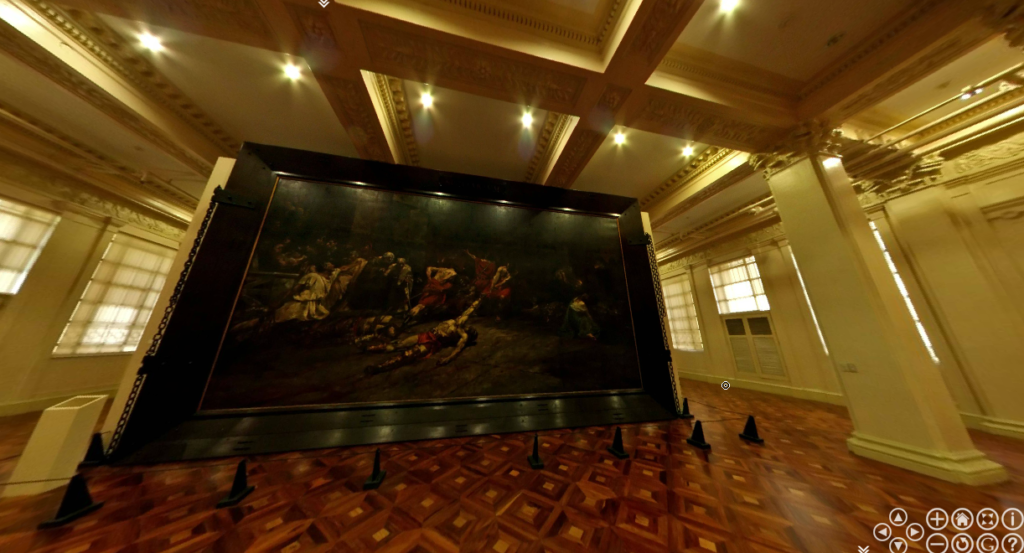 The Ayala Museum exhibits pre-colonial artifacts and contemporary art, and is known for its dioramas of Philippine history. Under renovation since June 2019, it has maintained an online presence. Check out its collections on Google Arts and Culture and learn about history and art on its YouTube channel.

The Presidential Museum and Library is located in Malacañang Palace and looks back on the country’s presidencies. Portraits, letters and documents of past Presidents, all the way from Emilio Aguinaldo, are housed here. Pay a virtual visit at Google Arts and Culture.

The Ateneo Art Gallery is a university museum which showcases contemporary art such as paintings, sculptures and installations. It refers to itself as “the first museum of Philippine modern art.” Take virtual tours of its floors through its website.

CANVAS aims to “promote children’s literacy, explore national identity, and deepen public appreciation for Philippine art, culture and the environment,” as stated on its official website. It is known for its partnerships with and promotion of young artists. Visit its exhibits online through Google Arts and Culture.

The National Museum exhibits artifacts and artwork “unique to the cultural heritage of the Filipino people and the natural history of the Philippines,” as per its website. A virtual tour is available on the same government website. Accessing it, though, may not be that easy, since it requires Adobe Flash Player for viewing, generally regarded as dated by most techies. JB

A day in the life of two Bagong Silangan teachers