A grandfather made Christmas more memorable for his 10 grandchildren this year by buying a school bus so he could drive them to class every day.

Doug Hayes surprised his grandchildren with a classic yellow bus last Saturday, Dec. 21, at their home in Oregon, USA.

His wife, Amy, revealed that the idea followed a conversation they had during his 59th birthday in June, as per her Facebook post on the same day.

So there we were, enjoying a nice dinner out to celebrate Doug's 59th birthday last June. Just for fun conversation I…

Amy noted that Doug was initially “bamfoozled” by the question, adding that he could not even comprehend it at the time.

However, Doug later had an answer to the question—he wanted a bus.

“I want a bus so I can go around every morning, pick up all the grandkids, and drive them to school before I go to work,” he said. “Just a small bus.”

“We’d sing songs, talk, and it would be something unforgettable they did with their grandfather,” he added. “If money were no object, I’d want a bus.”

Doug’s request became a reality months after his birthday when he brought a school bus to his house’s driveway on Dec. 21.

Upon seeing the vehicle, his 10 young grandkids squealed with delight, as seen in a clip Amy posted. Still wearing their holiday pajamas, the kids immediately made their way inside the bus while expressing how glad they were with the gift. 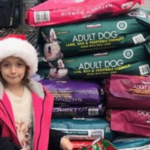 Instead of asking for toys, 8-year-old girl gives 600 pounds of food to animal shelter on Christmas 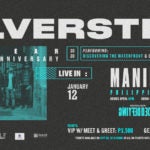