After the Burial Live in Manila: Countdown to PULP Summer Slam XX

We’ve long witnessed the Second Coming. Now, we’ve got something that’s sure to get you counting down the days to PULP SUMMER SLAM XX: Judgement Day—something to get you ready for the 20th installment of Southeast Asia’s loudest and longest-running Metal festival!

We’ll be together again in the pit soon enough—Minnesota’s After The Burial are coming to Manila to usher in the Metal madness of the Slam, bringing an excitement that can only grow stronger in the coming months. AFTER THE BURIAL LIVE IN MANILA: COUNTDOWN TO PULP SUMMER SLAM XX happens this August 21, 2019 at the Skydome, SM City North EDSA.

Coming from a string of tours—all over the US with Killswitch Engage and Parkway Drive in April/May; Australia in June; and in the UK/Europe for most of August—After The Burial are showing no signs of stopping and are making their way to Asia, with Manila as the kickoff show of this leg of their World Tour. 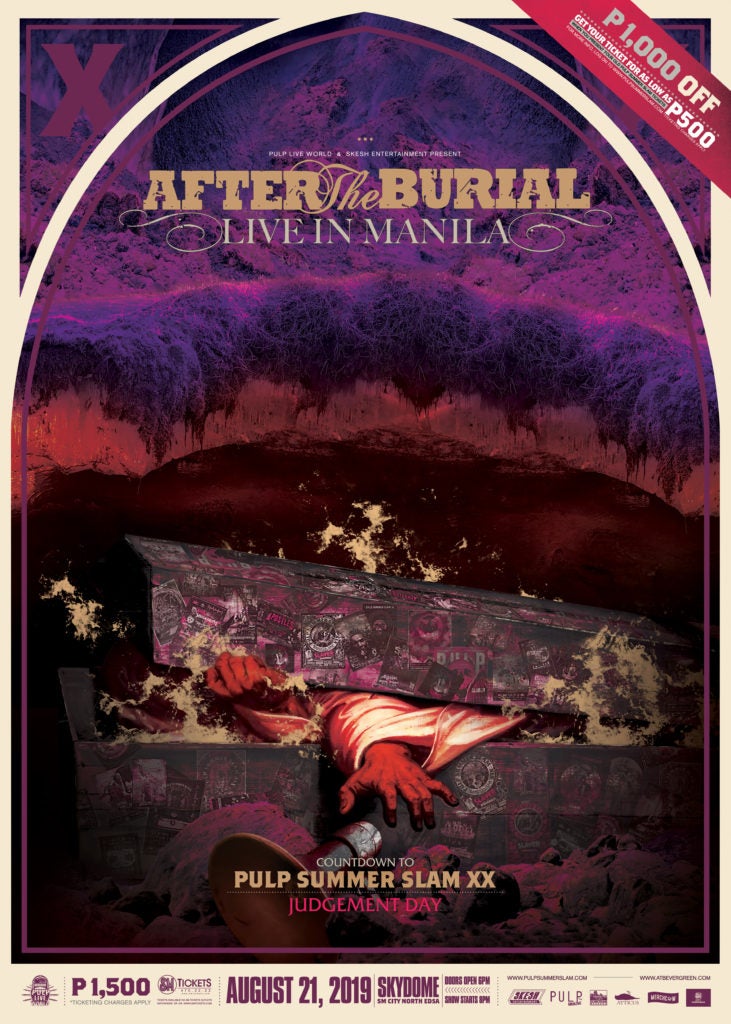 The long-time metal band, with its current lineup of Dan Carle (drums), Anthony Notarmaso (vocals), Adrian Oropeza (bass), and Trent Hafdahl (guitar), has just released a brand new record. Released last April 19th via Sumerian Records, Evergreen is the sixth album to come from After The Burial—a new addition to their growing catalog of scorching heavy-hitters, and an effortless expansion of the sound they’ve built through the years.

Looking back on Rareform, their highly acclaimed second album which celebrated its 10th Anniversary in 2018, and other earlier releases, the progression is apparent in so many ways throughout Evergreen—from the release of singles “Behold The Crown” and “Exit, Exist,” the album had been a highly anticipated one, with fans looking to discover how the band would build upon the strength of their previously released record, Dig Deep (2016). Intricate yet uninhibited, crushing yet precise—the band’s music is “tech-wizardry” amplified to a whole new level. Their latest opus only proves they are masters of their sound. 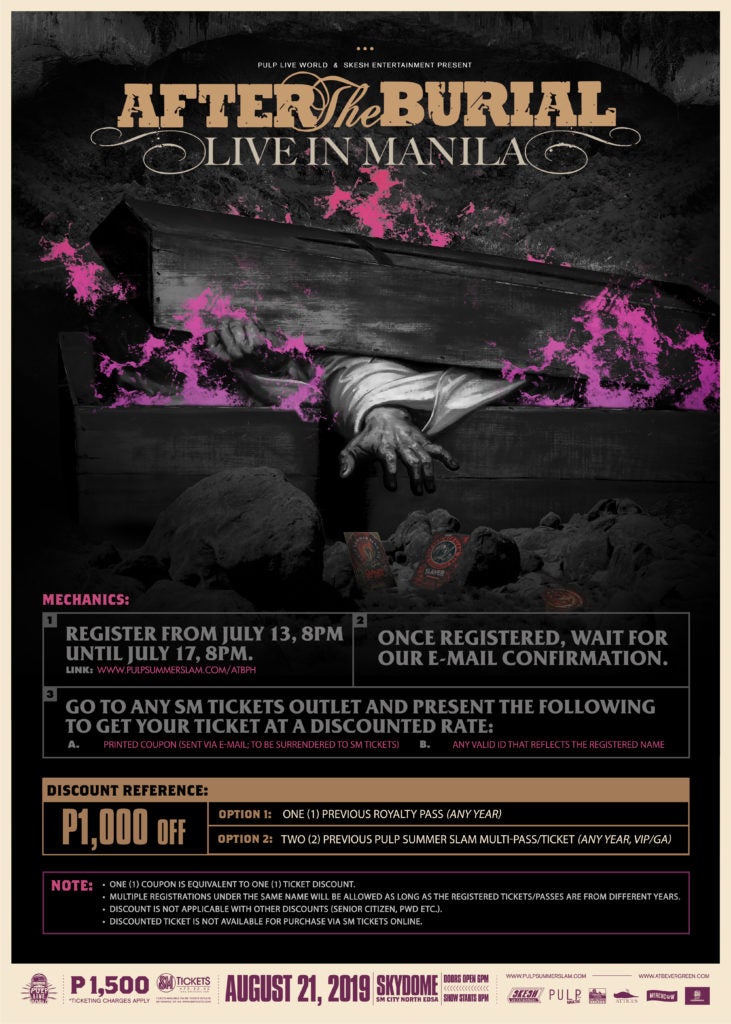 “Evergreen becomes me.” Indeed, what After The Burial continue to become is a band whose technical songcraft is ever-evolving yet timeless and refreshing. Presented by PULP Live World and Skesh Entertainment, AFTER THE BURIAL LIVE IN MANILA: COUNTDOWN TO PULP SUMMER SLAM XX is happening on August 21, 2019 at the Skydome, SM City North EDSA. Gates open at 6:00PM and the show starts at 8:00PM. Tickets are priced at P1,500 and will go on sale on July 21, 2019, 10:00AM, exclusively via SM Tickets outlets nationwide and online (www.smtickets.com). Ticketing charges apply.

For all diehard Slameros who through the years have been loyal to our unparalleled Filipino Metal tradition, it’s time to unearth your treasured memorabilia. Hold on to your old PULP SUMMER SLAM tickets and get a P1,000 discount on your ticket for the upcoming show! Check out the Mechanics at www.pulpsummerslam.com to see how you can purchase your ticket for as low as P500 (plus ticketing charges). Get your tickets as soon as possible because Early Birds will get to join the Meet and Greet session with After The Burial!
See you this August for a staggering Metal gig as we await our Judgement. Together, we’ll watch the countdown begin. PULP SUMMER SLAM XX: Judgement Day happens on May 16, 2020. #SeeYouAtTheSLAM!