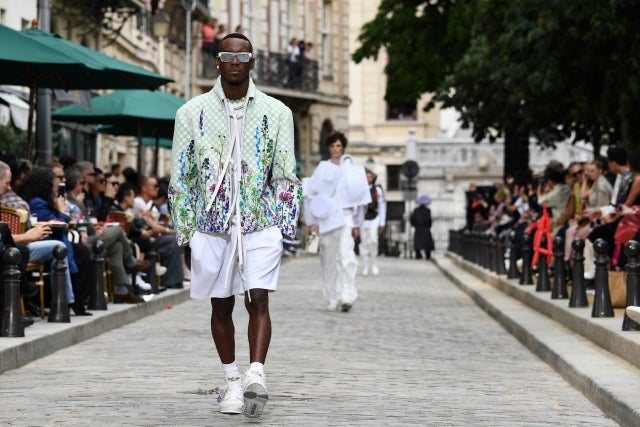 On the day that Paris fashion paid tribute to the late great Karl Lagerfeld, designers festooned the men’s catwalk collections with flowers.

Virgil Abloh took over one of the French capital’s most picturesque squares for his Louis Vuitton show and urged a digitally “oversaturated” world to drop its smartphones and “smell the roses.”

It was quite a declaration for a creator who seems to spend half his life teasing his four million followers on Instagram with his latest genius ideas.

On historic Place Dauphine, a stone’s throw from the label’s studios, the American cut loose with his idea of “boyhood bliss” with models carrying kites, red balloons and bundles of wild flowers.

Vuitton-clad street vendors handed out crepes with Nutella and champagne, and the square’s cafes, bookshop and park benches got a Vuitton rebrand.

The makeover even extended to Louis Vuitton tablecloths and ashtrays.

Abloh seemed to be channeling Lagerfeld’s famously decadent Paris shows at the Grand Palais, where a star-studded group of his friends and colleagues gathered to remember to the “Kaiser” Thursday, four months after his death aged 85.

Only 24 hours before, the first black American to lead a major Paris house had filled a converted market with a field of white carnations for his own label, Off White.

“Stopping to smell the roses de-programs the mind and makes new space for freedom of thought,” the designer said, in this age “oversaturated with views and visual data.”

Abloh adorned his pastel-toned Vuitton spring summer collection with sprays of wild flowers — but he was sparing with them in keeping with label’s classy casual tradition.

Belgium’s Dries van Noten, however, went floral fantastic, sowing his flowery prints into more than three quarters of his hugely impressive collection that he insisted was “cocky, feral, flashy… and virile to the max.”

The Flemish “king of prints” sewed sequin flowers into a killer white denim jacket and more formal black one, before delivering a lesson in tailoring with a line of eight-button, double-breasted suits and flowing navy coats that brought to mind the graphic novel hero, Corto Maltese.

Tucked at the waist, Van Noten added a double back pleat to many of his more formal jackets, overcoats and trench coats.

The rich color palette the the designer often borrows from Flemish Old Master paintings was cut that with leopard, tiger and zebra print trousers, shirts and bags.

Issey Miyake also treated fashionistas to a midsummer celebration of nature, with the label’s typically loose and comfy clothes done in blocks of bright primary colors.

Models skipped around a maypole in the gardens of Place des Vosges — the oldest planned square in the French capital — or danced to a band of drummers or played football.

Acrobats showed just how forgiving the brand’s pleated creations are by doing body flips under the trees.

There wasn’t a blade of grass in sight at the relentlessly urban avant-gardist Rick Owens’ highly personal show, which he conceived as a riposte to US President Donald Trump’s “fixtion on a border wall.”

Yet the half-Mexican maverick — who specializes in a post-apocalyptic LA vibe — dedicated his show to the California-based and United Farm Workers union, whose Aztec eagle symbol appeared throughout the darkly glamorous rock chic collection.

The son of “an Anglo father who worked as a translator for Mexican migrant farm workers” in southern California, Owens said he and his indigenous Mexican mother “learned English together when she started taking me to nursery school.”

He called the show “Tecuatl” after his grandmother’s Mixtec name, and had three Mexican drummers hammer out Aztec ceremonial music to a Nahuatl chant which ended, “This life song who have laid out yourself like flowers…” CC