LOOK: Your favorite 90s cartoon classics are returning to TV this May

When it comes to good old-fashioned entertainment, you can never go wrong with watching any of the classic cartoons. From the Flinstone’s endearing family dynamic to Johnny Bravo’s hilarious antics, these animated shows brought us countless joys throughout our childhood. And thanks to Cignal TV, many of us, nostalgic 90s kids, can now rewatch our favorite cartoons on television! 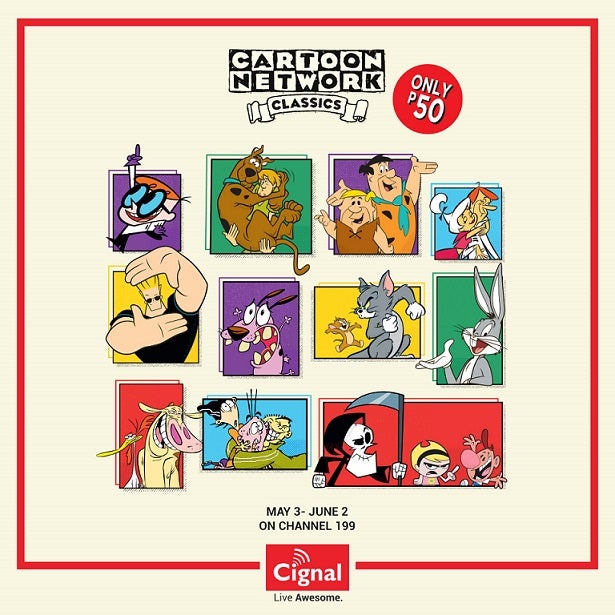 Starting this month of May, Cignal TV is offering viewers the chance to enjoy their favorite childhood shows on Cignal TV Pay-Per-View for the price of 50 Pesos. And to get you even more excited about this deal, here are some of the classics you can watch and enjoy through the network’s add-on offer.

Kids and kids-at-heart will definitely relate to and appreciate Dexter and Dee Dee’s sibling rivalry. As a child genius, Dexter has a natural knack for inventing new technologies. But when his sister Dee Dee gets in the way, his experiments always tend to go awry–what happens then is a series of events that will have viewers laughing out loud.

The Flintstones are your “modern stone-age family.” Living in BedRock, Wilma, Fred, Barney and Betty’s adventures feature a plethora of fun scenes and anecdotes that any member of the family can enjoy.

Composed by the ragtag team of Fred, Velma, Daphne, Shaggy, and the Great Dane dog Scooby Doo, the “Mystery Incorporated” gang solves numerous cases in the show, “Scooby Doo.” From finding stolen artifacts to fighting off monsters, this group of friends will go on crazy lengths to get the job done–and the results of their investigations are often surprising.

As someone who takes pride in his overall appearance, Johnny Bravo is confident that he can make any girl fall in love with him. But his failed attempts at flirting only show that beauty is skin-deep.

The Powerpuff Girls were the prime example of girl power in the 90s. Although they were made with sugar, spice, and everything nice (plus the infamous chemical X), these girls prove that women can kick butt and save the world.

Though his name literally equates to bravery, Courage is an anxious dog who will do anything and everything to protect his owner Muriel. And as each episode offers a sinister and intimidating nemesis, viewers will be entertained by Courage’s attempts to overcome his fears and save his family.

Complete with a fascinating storyline and action-packed fight scenes, this show will have you glued to your TV screens and wishing you were as cool as Samurai Jack!

The Grim Adventures of Billy and Mandy

Billy and Mandy are two unlikely friends who manage to make the Grim Reaper a part of their squad. And their unique friendship dynamic and funny escapades make this show worth tuning into!

Lastly, we can’t forget the jawbreaker-loving friends that are Ed, Edd, and Eddy. Their juvenile yet hilarious antics truly make for good television!

Catch any of these classic 90s cartoons today through Cignal TV! For more information on subscribing and the other shows they offer, visit https://cignal.tv/addons.