19 years strong—this March 23, 2019 at the Amoranto Stadium, PULP SUMMER SLAM is set to add yet another year to its unparalleled legacy of making Metal history in the Philippines.

The mighty and legendary thrash metal band SLAYER leads an elite roster of bands performing at PULP SUMMER SLAM XIX—the latest edition of Southeast Asia’s loudest and longest-running Metal festival. The Slam will also be SLAYER’s only stop in the region on their massively successful and in-demand Final World Tour. After hitting Japan and Australia, this will also be SLAYER’s last ever show on this side of the planet. Tom Araya, Kerry King, Paul Bostaph, and Gary Holt—the reigning titans of thrash—will be returning to wash over Manila once more with crimson rain, following their monumental and historic first show in the Philippines in 2017.

Aside from SLAYER, PULP SUMMER SLAM XIX also features performances from a globally-diverse line up of support acts:

REMNANTS were just formed in 2017, but have shown much promise in a short amount of time. The Filipino deathcore band notably emerged victorious as the very first Tribal Bandidos Grand Champions, besting other up-and-coming local bands. 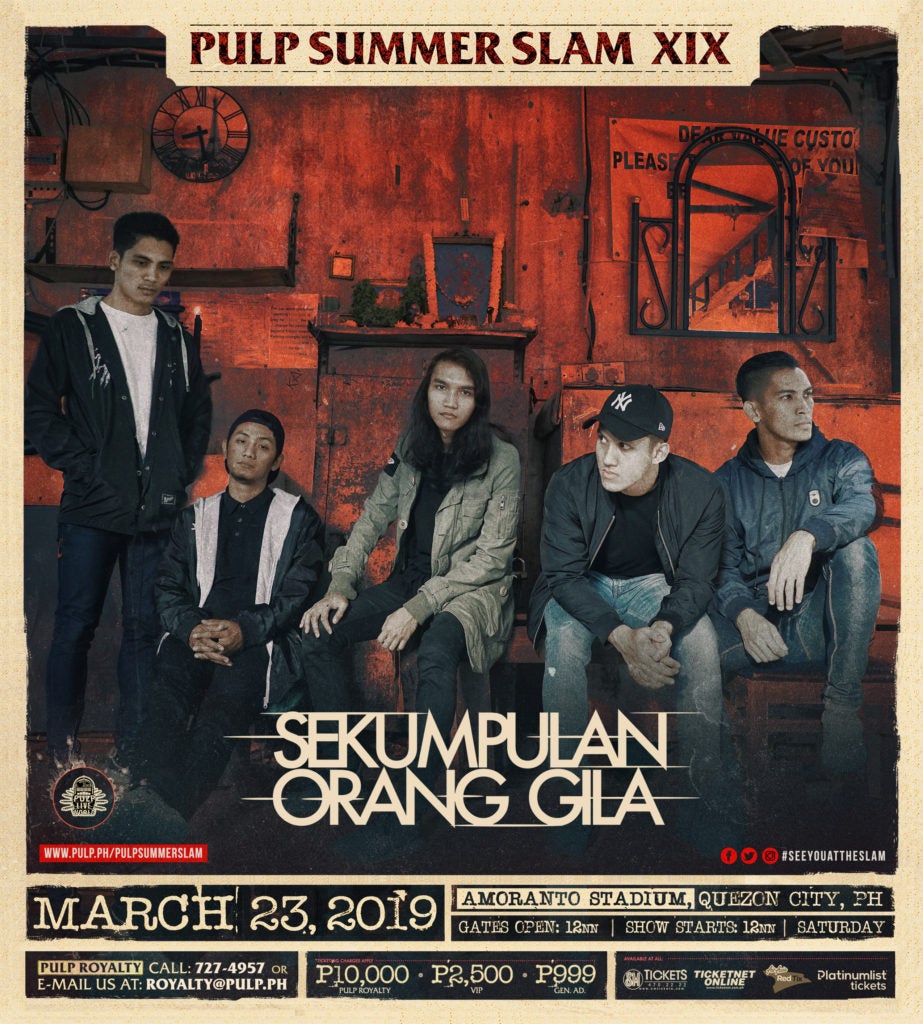 S.O.G. (SEKUMPULAN ORANG GILA) are a Malaysian band based in Kuala Lumpur. They describe their music as a hybrid modern hard rock, infused with elements of traditional nusantara. 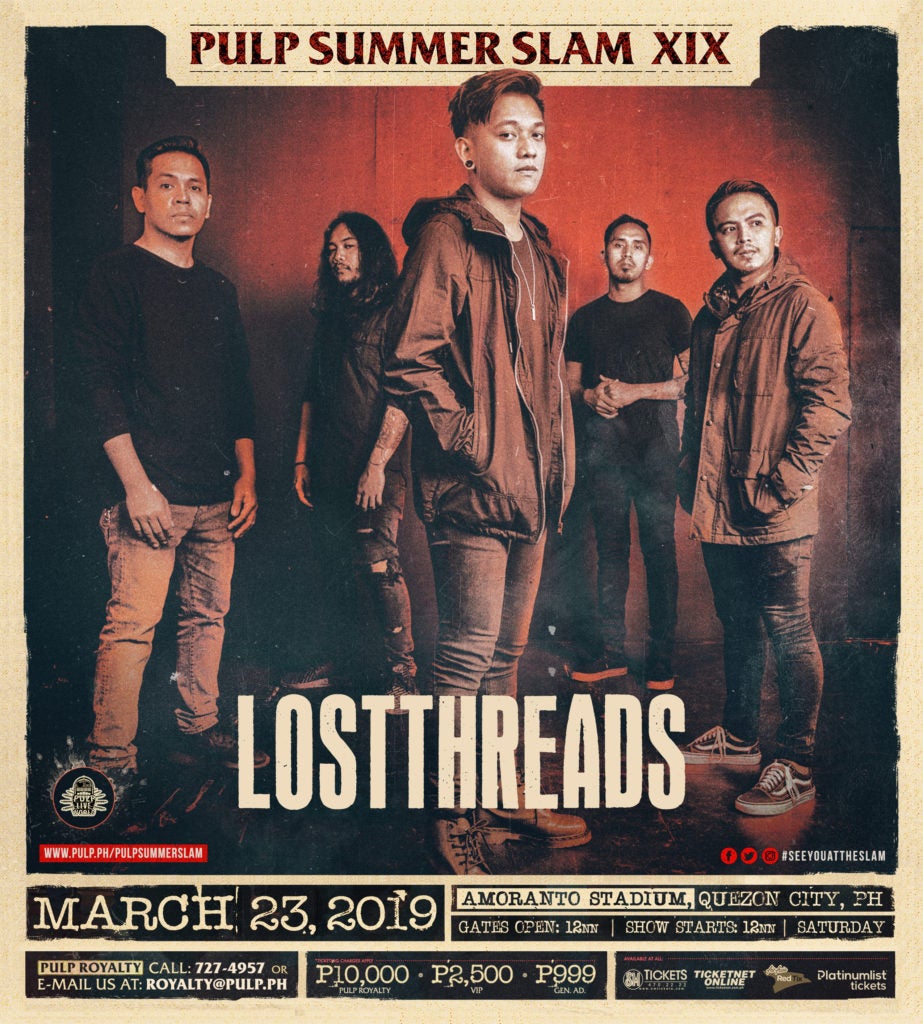 LOSTTHREADS are a Manila band that first had a shot at performing at the Slam in 2014, but found the perfect timing to be part of the historic festival this year. The metalcore heavyweights have just released their long-awaited second album, Aftermath. 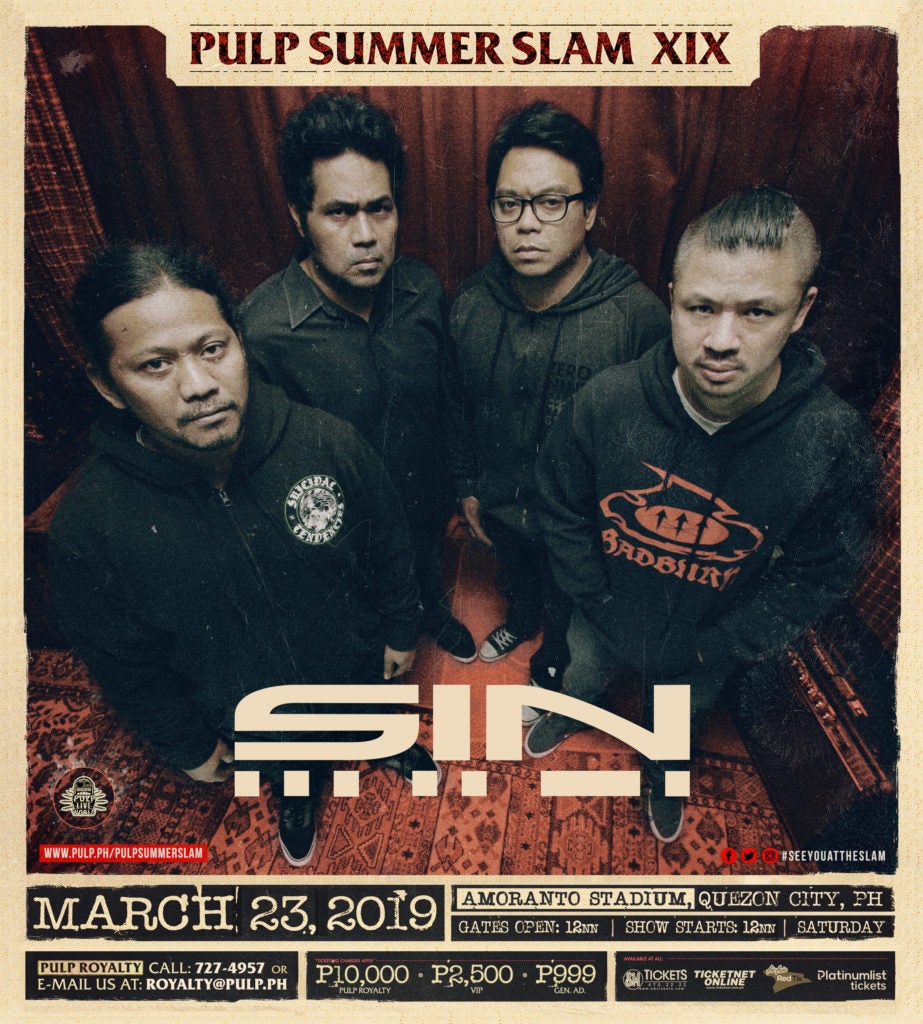 SIN are the pride of Cavite. The last time they performed at the Slam was in 2012 (PULP SUMMER SLAM XII: APOSTLES). This year, they make their Slam comeback to the delight of everyone who remembered their reputation of being among the very best in the local underground Metal scene. 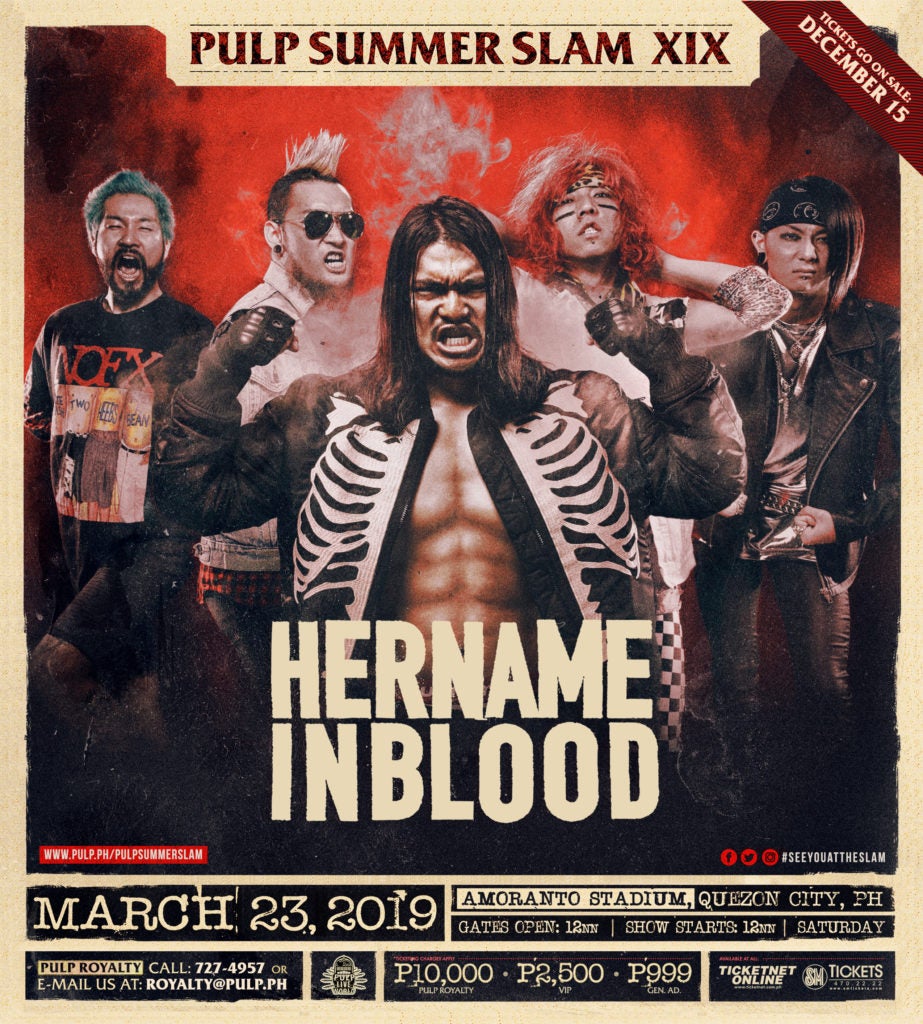 HER NAME IN BLOOD are a metalcore band coming straight from the red skies of Tokyo, Japan. Formed in 2007, the long-time band has released their latest album, Power. Among the acts they have shared the stage with through the years are PULP SUMMER SLAM alumni Hatebreed, Asking Alexandria, As I Lay Dying, August Burns Red, Crystal Lake, and Periphery. The five-piece band is currently signed with Warner Music Japan. 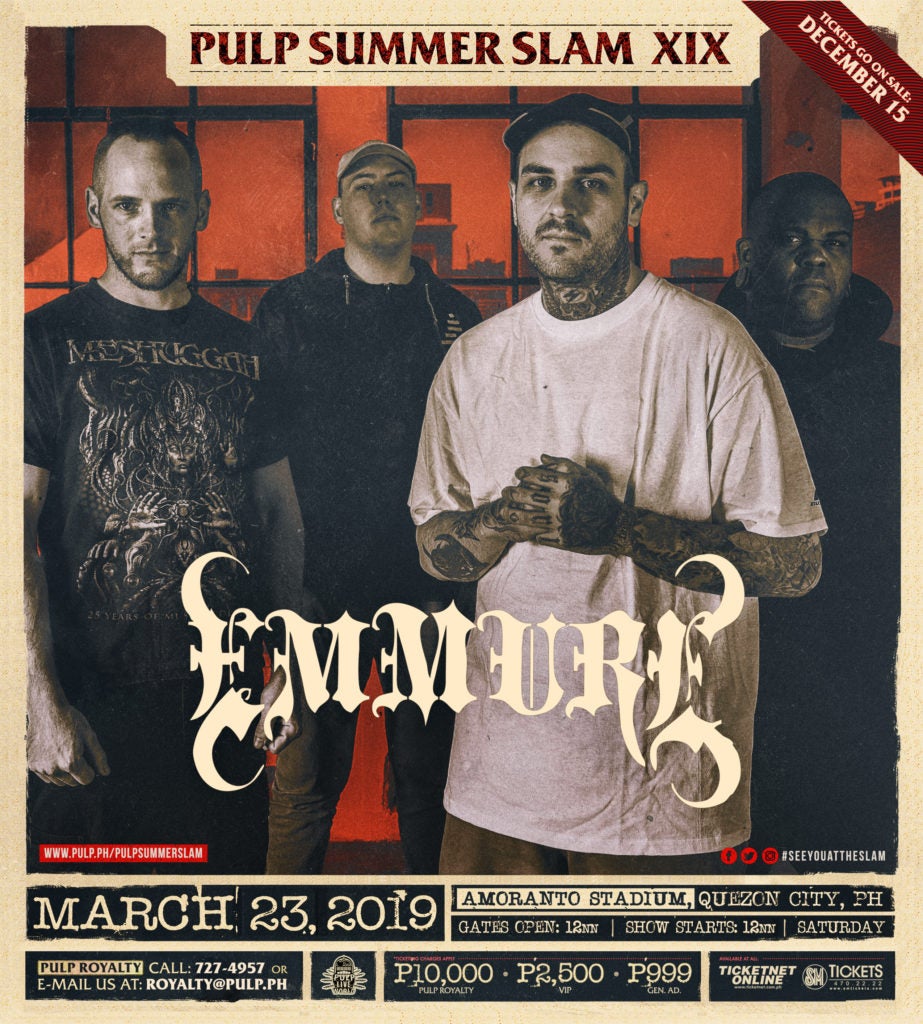 EMMURE hail from New York. Led by founding member Frankie Palmeri, the Cult will be performing for the very first time in Manila. The current and all-new line up of the band is behind the newest Emmure album, Look At Yourself, which was released in 2017 through Nuclear Blast Records. 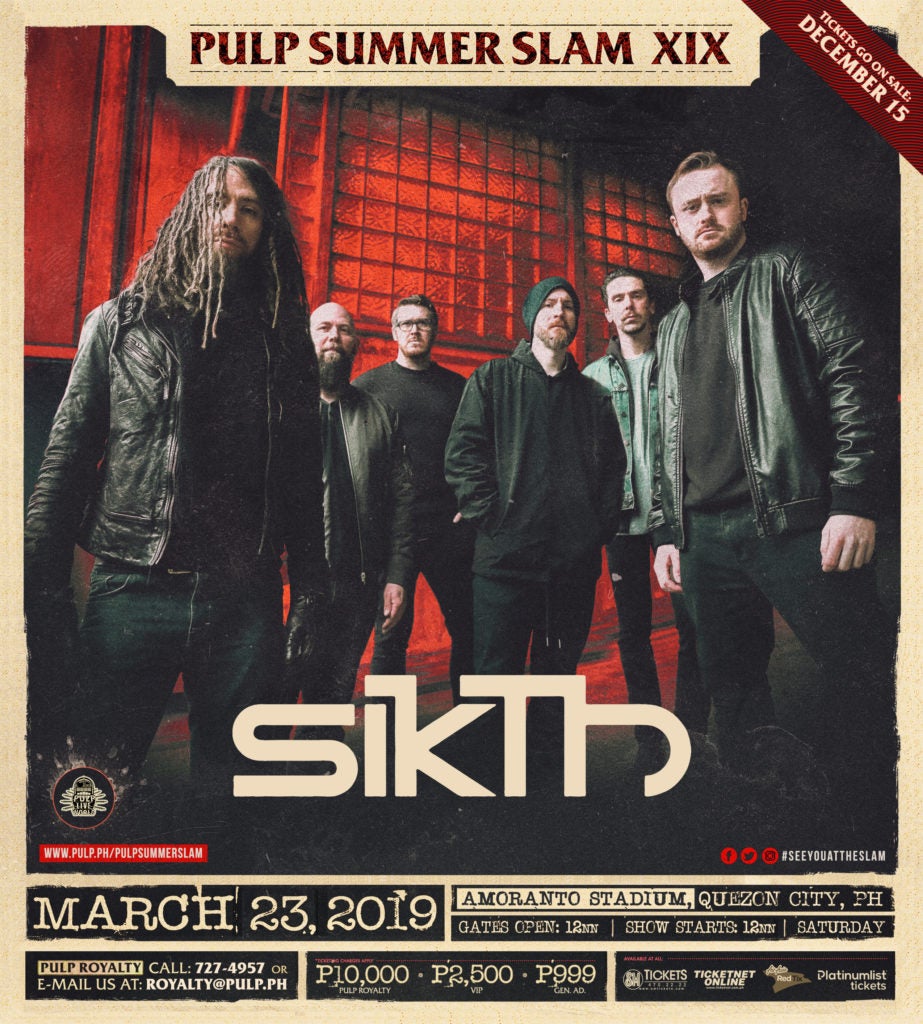 SIKTH are a UK-based progressive metal band. Their music, from their very first release The Trees Are Dead & Dried Out Wait For Something Wild to their latest offering The Future In Whose Eyes?, the British band’s music is the stuff of legends for djent nerds. They blend their ultra-heavy and chuggy assault with a heady mixture of mathcore, nu-metal, and other styles. 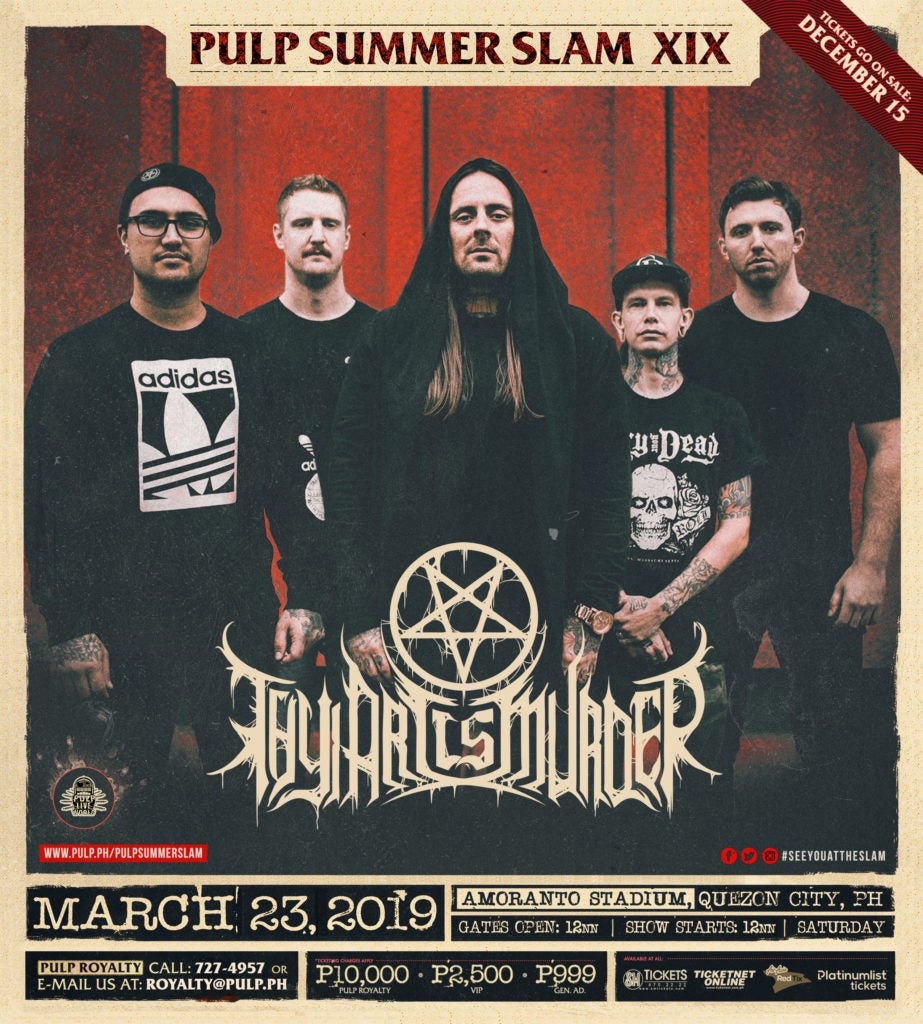 THY ART IS MURDER are making their Manila debut at a very exciting juncture. The Australian band has just reunited with original vocalist CJ McMahon, thereafter releasing Dear Desolation—the band’s first album since 2015. Dear Desolation, released in 2017 through Nuclear Blast Records, was an album that not only ushered the comeback of the band, but also that of deathcore as a subgenre. 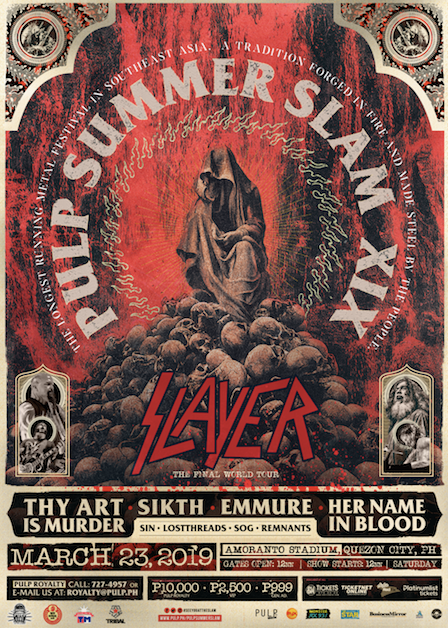 Save the date—all hell will break loose at the Amoranto Stadium on March 23, 2019 at PULP SUMMER SLAM XIX. Tickets are still available via SM Tickets, TicketNet, PlatinumList, and AirAsia RedTix. Ticket prices are as follows: PULP Royalty (P10,000, SOLD OUT!) ; VIP (P2,500); and General Admission (P999). Ticketing charges apply. PULP SUMMER SLAM is presented by PULP Live World and also brought to you by Red Horse Beer, TM, and Tribal; in cooperation with Monster RX 93.1, Rakista Radio, The Philippine Star, and PULP Magazine. See you at the SLAM!