Hundreds of political science students from different colleges and universities in NCR, CALABARZON, Central Luzon, and as far away as Northern Luzon will be gathering for the “Second APSOP Annual Public Lecture on Political Science” that will be held on December 1, 2018 (Saturday) from 8 am to 12 noon in the Ricardo and Dr. Rosita Leong Hall Auditorium of the Ateneo de Manila University in Quezon City.

Organized by the Association of Political Science Organizations of the Philippines (APSOP) in cooperation with the Office of the Associate Dean for the Core Curriculum, Loyola Schools of the Ateneo de Manila University, this gathering will feature a lecture entitled “Filipino Social Democracy and the Struggle for Democratization: History Lessons for the Present Generation.” 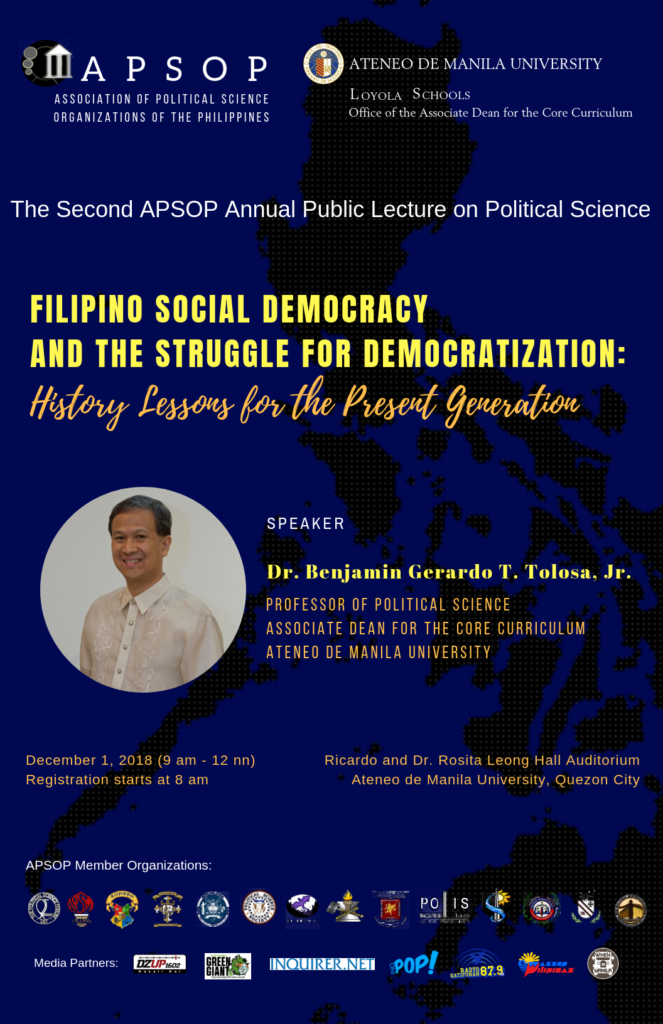 APSOP is honored and privileged to have as its Speaker for this lecture, Dr. Benjamin T. Tolosa Jr., a Professor of Political Science at the Department of Political Science, School of Social Sciences in the Ateneo de Manila University. He is also the Associate Dean for the Core Curriculum of the Loyola Schools of the same university.

Dr. Tolosa’s lecture is on the timely topic of social democracy in the Philippines where he will share to the members of the present generation the important historical lessons of the Philippine democratization struggle against the Marcos dictatorship. As Dr. Tolosa’s lecture will emphasize, “(t)he task of defending and deepening democracy – a central tenet of social democracy – has become particularly stark and urgent. And yet because what many citizens experience, including young people, are the obvious flaws of an imperfect democracy, they often become indifferent to it and disengage from the world of politics. Worse, they may even get drawn to authoritarian alternatives.”