The first day of the 16thLanuza Surfing Festival was all about cross steps, cutbacks and flips, as the longboard riders ruled the waves. Though the day started with small waves, the sun was out and the surfers gave their best on the first heats.

With the small swell, the judges decided to start with Women’s Open Longboard. The Siargaonon rider Shiela Mar Convicto led the first heat of the competition with her smooth moves that made her score 6.45 points, sending her straight to the quarterfinals, along with Angel’Lea Aguilar, Ashlee Lopez and Winnie Fuller.

The competition continued with the Men’s Open Longboard division. Marven Abat from La Union and Mark Aguila from Baler, who was the 2017 overall Men´s Longboard Champion, both led Round 2 getting the highest heat scores 9.75 and 9.45 respectively. 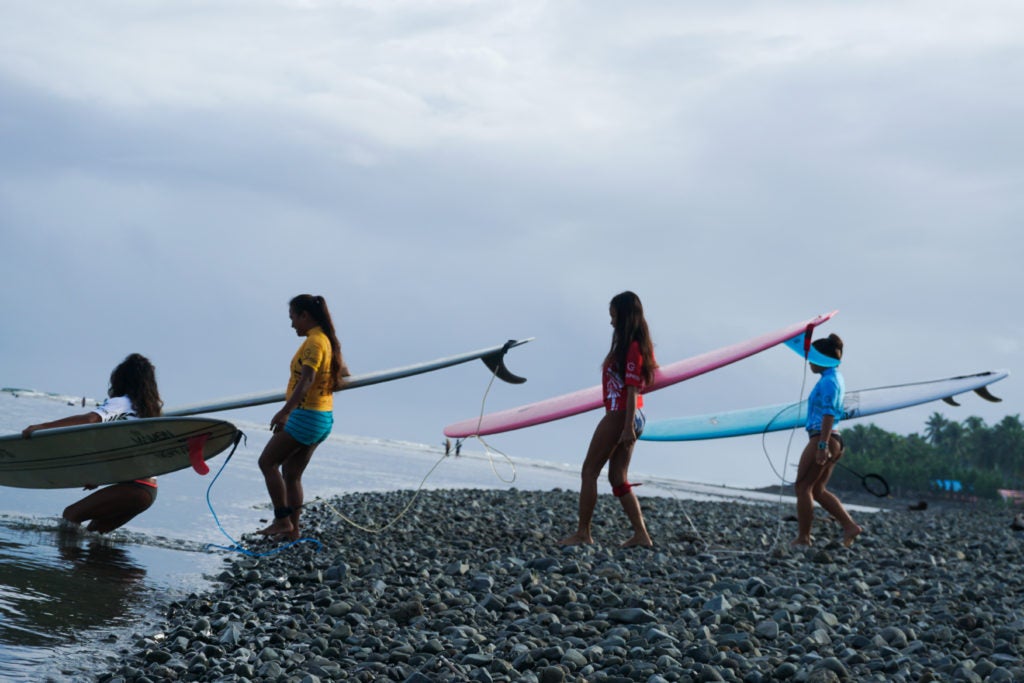 The beautiful sea of Doot-Poktoy delivered 2-3 foot waves for the Women’s Longboard, which ran from Round 1 to the Quartfinals. The best women longboarders in the country battled for a spot on the Semifinals. Daisy Valdez from La Union, who is the most experienced among the female longboard competitors, had consistent advantage over her opponents. “I hope the next days the swell will get bigger so we can have a good duel with the girls,” said Valdez after her wining heat. The women competing in the Semifinals are: Daisy Valdez, Ashlee Lopez, Jessah F. Agudo, Marcel Parajes, Jevy Mae Agudo, and Angel’Lea Aguilar.

The day concluded with the official opening ceremony hosted by the Municipal Government of Lanuza. With fireworks and festivities in the background, the students of Lanuza danced for the crowd who clapped and enjoyed the official start of this year’s competition.

Mayor Salvacion Azarcon affirmed that every year there are more people joining the competition. “We are thrilled by all these surfers coming to our home to enjoy the waves of Doot-Poktoy. We are also very happy that they are visiting the Province of Surigao del Sur. Without surfers there would be no celebrations like this,” concluded Mayor Azarcon.

Everyone is expecting the waves to get bigger in the following days, making the conditions a bit more challenging. With the low pressure area coming in, there’s definitely more action in store for the remaining days of the 16thLanuza Surfing Festival.