The Little Prince: An interactive play is coming this June and July 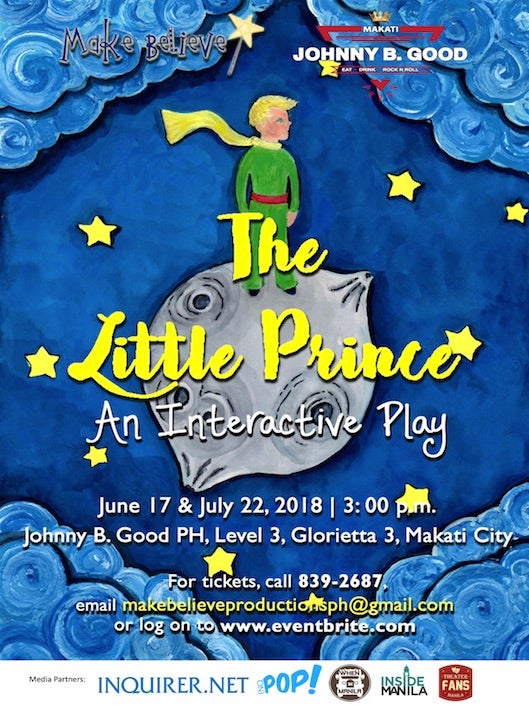 Looking for something meaningful to do this coming Father’s Day? Make Believe Productions and Johnny B Good PH proudly present ‘The Little Prince: An Interactive Play!’ A show for the entire family, this comes with interactive segments for both children and adults, a beautiful musical soundtrack, and hearty snacks included in the ticket price. Witness an intimate musical staging of this beloved tale (which happens to also be celebrating its 75th Anniversary) by Antoine de Saint-Exupery, now landing at a cool and grooving asteroid in the heart of Makati:

This musical adaptation by Make Believe includes original, heartwarming songs created by singer-songwriter Pipo Lina. Initially staged in Fully Booked Bonifacio High Street last September 2017 (check out the highlights here: https://www.facebook.com/MakeBelievePH/videos/1660316247352387/), the story is told in a refreshing, interactive format wherein audience members are asked to join the action. With its timeless message of seeing with the heart, embracing love and friendship, and never forgetting the child within all of us, this show will surely entertain, touch, and inspire a new generation of children and families alike.

Lukas Magallano is a Star Magic Talent and the grand winner of the 2012 reality talent show Promil Pre-School i-Shine Talent Camp on ABS-CBN.

Alejandro Rivera is a true renaissance man: a real-life pilot, he is also an actor, singer, violinist, and photographer. In between flights through clouds, he plants his feet firmly onstage.

Jon Philippe Go is known as the “Singing Chemist.” A chemist by profession, he entered the pop music scene through The Voice, as part of Team Lea in Season 2. He last appeared in I Remember a Boy by Artist’s Playground.

The play is written and directed by Lesley Leveriza-Lina, with original music and lyrics by Pipo Lina, musical direction by Ria Ortega, choreography by Zildjian Pigao, and production design by Maruja Calixto.

First few ticket buyers per show will receive a free copy of the souvenir program worth P200!

Antoine de Saint-Exupery
Johnny B Good PH
The Little Prince
INQPOP! Stories we think you might also like: