The World Health Organization (WHO) estimates that more than 300 million people worldwide now live with depression. They also estimated that almost 800,000 people die due to suicide every year—that’s one person every 40 seconds. It is the second leading cause of death among 15-29 year olds around the world.

Depression manifests itself in almost every aspect of a person’s life: sleeping patterns, eating habits, energy levels—it is even noticeable in the way you speak and express yourself in writing. 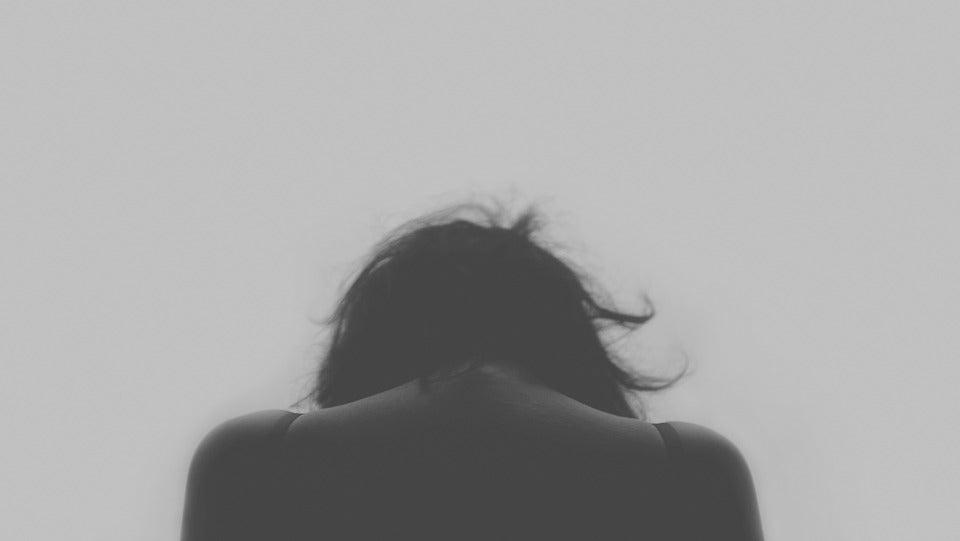 Depression manifests itself in almost every aspect of a person’s life, even in the way you speak and express yourself in writing. via Pixabay

A new study published in the Clinical Psychological Science journal used text analysis to identify a class of words that are often used by people who are (or who have a tendency to be) depressed. The researchers examined 63 internet forums with over 6,400 members using the Linguistic Inquiry and Word Count (LIWC) software and found three main differences between how people with and without depression use language.

The first two differences have been established in previous studies: a) depressed people use a lot of words that convey negative emotions, and b) they significantly use more singular pronouns (“me”, “myself”, and “I”) than second and third person pronouns (“us”, “we”, and “them”).

“It will surprise no one to learn that those with symptoms of depression use an excessive amount of words conveying negative emotions, specifically negative adjectives and adverbs—such as lonely, sad, or miserable,” Mohammed Al-Mosaiwi, one of the psychologists behind the study, wrote.

Al-Mosaiwi also stated that the predominant use of singular pronouns suggests that “people with depression are more focused on themselves, and less connected with others.” Previous research has established that pronouns are more reliable in identifying depression than negative emotion words.

The third difference, which is actually the main focus of the study, is the abundance of “absolutist words” used in posts in the forums that they examined.

“Words, phrases, and ideas that denote totality, either of magnitude or probability, are often referred to as absolute,” Al-Mosaiwi wrote. Absolutists words were found to be even better markers for mental health forums than either pronouns or negative emotion words. Below are the words that they screened for the research: 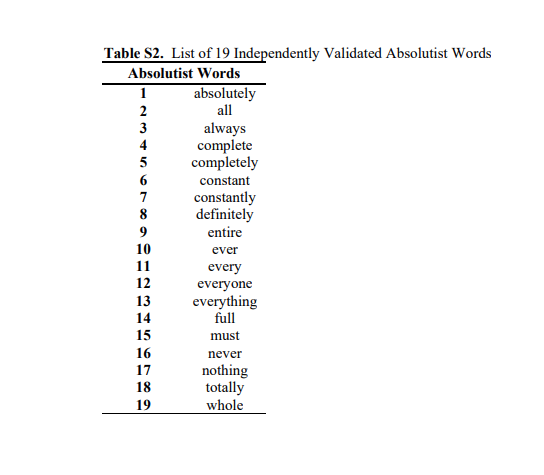 The absolutist words that were screened in the forum posts for the research. image source

Absolutist thinking is characterized by a tendency to see the world in black and white and an inability to acknowledge or cope with the fact that most things in life are relative. For example, an absolutist would think that failure to do one thing means that s/he can’t do anything right. Or that being rejected by one person means that no one would be able to accept him/her at all.

In psychology, it has been identified as a way of thinking that “promotes emotional distress.”

The research found that compared to 19 control forums like Mumsnet (a popular parenting site in the UK) and StudentRoom (a community for UK students), anxiety forums and depression forums had 50% more absolutist words while suicidal ideation forums had 80% more.

“It is interesting that absolutist words tracked the severity of affective disorder forums more faithfully than negative emotion words,” the researchers wrote.

They also examined recovery forums where “members who feel they have recovered from a depressive episode write positive and encouraging posts about their recovery” and found out that the usage of absolutist words were still higher than in control forums. This may suggest that those who have previously had depressive symptoms are more likely to have them again.

“Their greater tendency for absolutist thinking, even when there are currently no symptoms of depression, is a sign that it may play a role in causing depressive episodes. The same effect is seen in use of pronouns, but not for negative emotion words,” the study stated.

These three distinctions in language are by no means clear-cut signs of depression, however. According to Al-Mosaiwi, “it is of course possible to use a language associated with depression without actually being depressed.” But the findings are important because it helps us identify depressive symptoms in people and prevent tragic suicides.

Entitled “In an Absolute State: Elevated Use of Absolutist Words Is a Marker Specific to Anxiety, Depression, and Suicidal Ideation,” the study was conducted by Mohammed Al-Mosaiwi and Tom Johnstone of  the University of Reading in Berkshire, England.

Studio places 84 statues on their roof, one for each man that commits suicide in the UK every week
13 Reasons why you should #KeepGoing
People who get goosebumps from music have unique brains, study suggests
Science says sniffing your partner’s shirt helps reduce stress
LOOK: Pinay speaks out on Twitter about mental health after seeing a mom publicly condescend her child on the jeepney
Monkey study suggests louder males have smaller balls