7 Things you need to do when in Hokkaido, Japan

Hokkaido, the northernmost and coldest island of Japan, is home to a number of beautiful locales that are worth visiting again and again. You might remember that it is where the Alempoy movie “Kita Kita” was filmed. During winter, Hokkaido is even more beautiful as the cities and forests become covered by white snow. And if you’re looking to get away from the fast-paced city life, you’d be able to appreciate the relaxed way of life of the people in the island compared to those living in bustling Tokyo.

Here’s a list of things you should do when you visit the island:

1. Experience the Sapporo Snow Festival and other winter festivities

Hokkaido’s winter season usually starts during late December and ends around March, so that’s the best time to visit if you want to see snow. Hokkaido is especially beautiful during winter, with many towns holding snow festivals to celebrate the season. One of the most popular in the country is the Sapporo Snow Festival, which takes place for a whole week every February.

A little bit of history: the Sapporo Snow Festival actually began some time during the 1950s, when groups of children would create snow sculptures in Odori Park. Today, the festival has become a large, commercialized event that features gigantic sculptures and attracts almost two million tourists every year.

The city also hosts the Sapporo White Illumination every winter in Odori Park. During this time, the park is filled with thousands and thousands of light bulbs that create a truly breathtaking sight each night. It usually starts around November and lasts until mid-February. 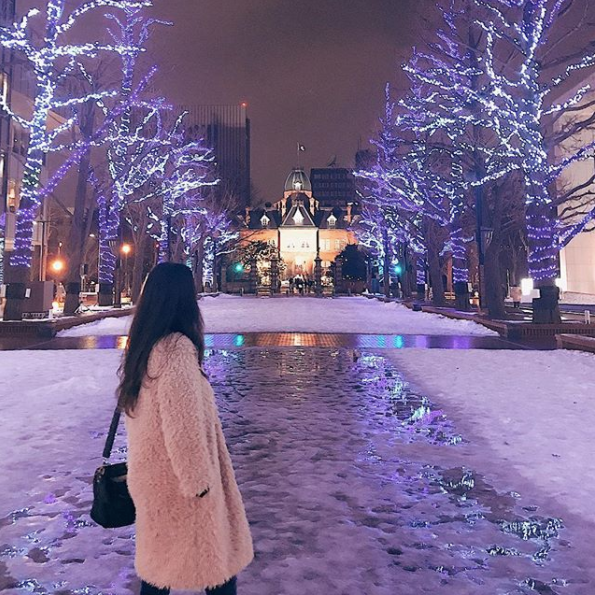 Another place worth visiting is the Asahiyama Zoo, which is popular for its glass tunnel that goes through the penguin pool and other enclosures that allow visitors to come close to the animals. The zoo also houses other species like deers, eagles, polar bears, wolves, and big cats. 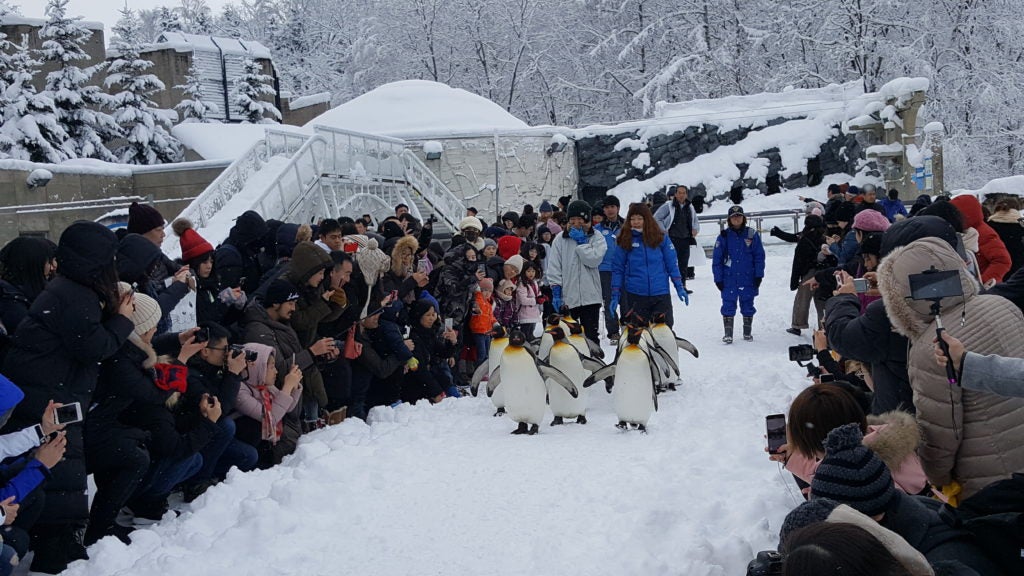 Penguin Parade at the Asahimaya Zoo

While it’s a great place to drop by all-year round, the winter season stands out because this is when they hold their Penguin Parade! And who wouldn’t want to see those cute little birds waddling around the zoo, right?

Hokkaido also has a number of ski resorts where you can enjoy fun activities in the snow—something that every Pinoy definitely needs to experience while in Japan. One such place is the Kiroro Ski Resort where you and your family can try riding snow rafts, snow banana boats, mini snowmobiles, and snow buggies as well as cross-country skiing and other activities. 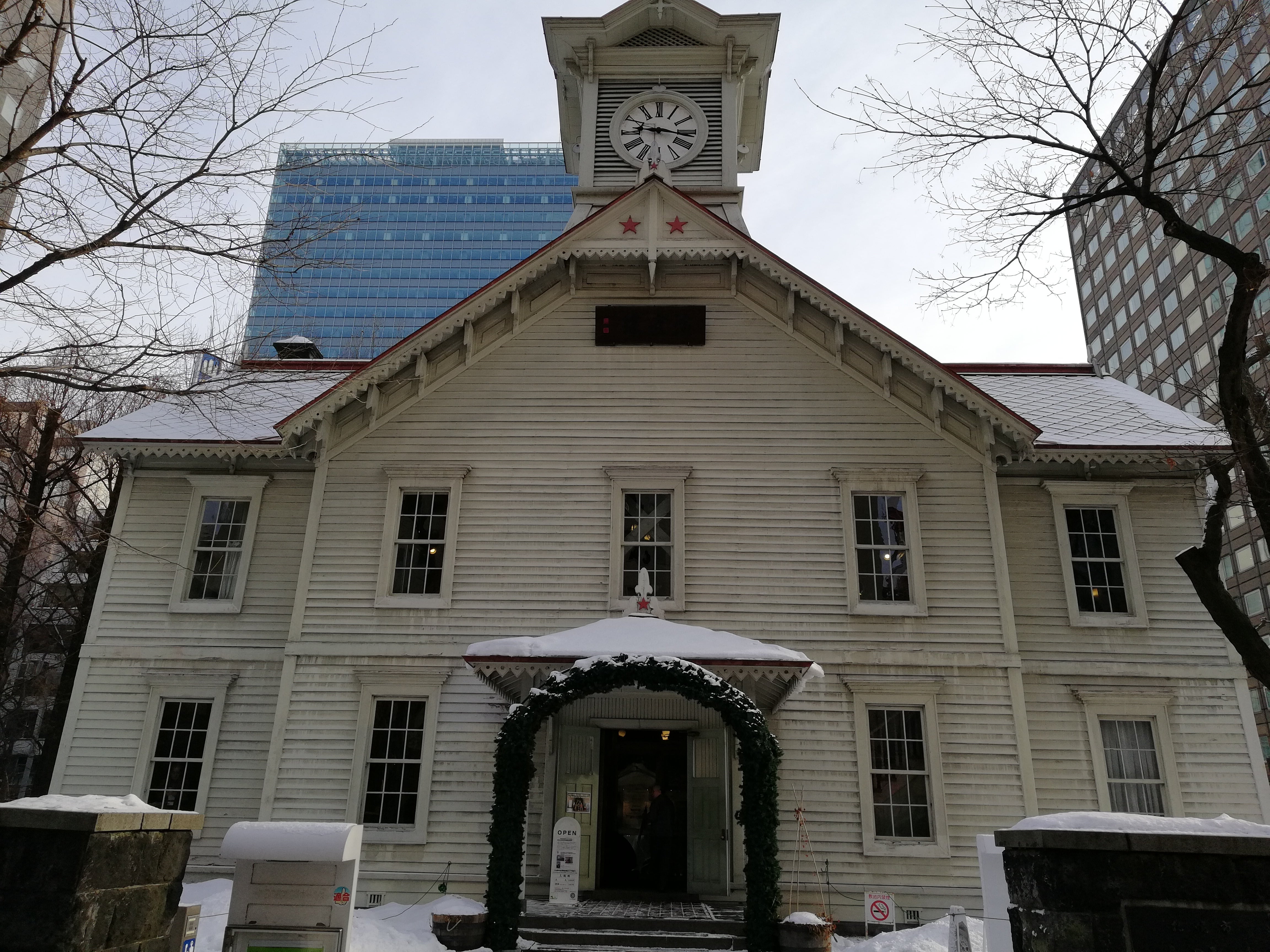 Japanese culture is very interesting and is something that you should definitely try to learn more about when you visit the country. You can pray at one of the many Shinto shrines or the Buddhist temples that you can find there, or visit some of the old and historic sites that they have. At Hokkaido’s capital city, Sapporo, you will be able to find the Sapporo Clock Tower. The building was first constructed in 1878 during the early period of Sapporo’s development and was used as a drill hall for the Sapporo Agricultural College. The clock, which was purchased in Boston, was added to the tower in 1881.

Today, the first floor of the tower serves as a museum that showcases the early years of Sapporo. From the outside, it is remarkable how the mostly wooden tower is surrounded by modern buildings and roads—truly a reminder of the city’s past. Admission to the tower is free and there is a small gift shop where tourists can buy souvenir items. 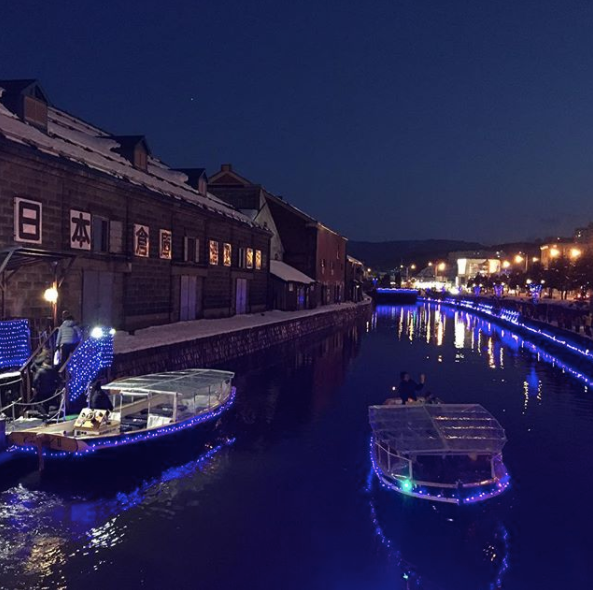 Another historical site worth the visit is the Otaru Canal Cruise, which is a leisurely 40-minute boat tour around the canal. Otaru, which is a port city, once prospered as the gateway to Hokkaido and the cruise passes by the old buildings from those years.

3. Check out the local art scene

Make sure you leave some time on your schedule so you can squeeze in a trip to the local art museums because they’re also very interesting! 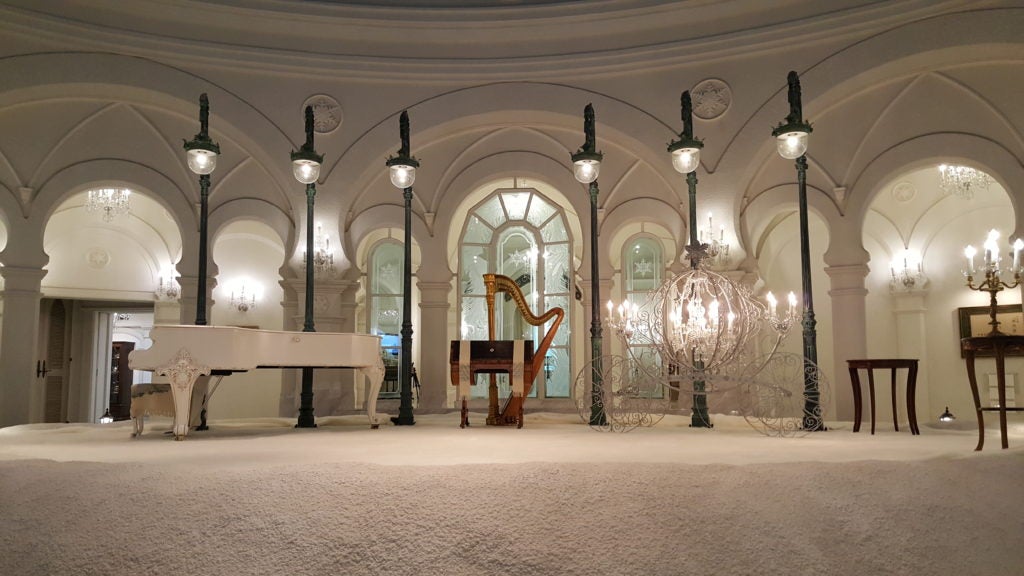 Inside the Snow Crystal Museum

In Asahiwaka, there’s a charming and understated place called the Snow Crystal Museum that is dedicated to snowflakes. The museum looks a bit like a small European castle and has corridors made of ice, ornate snowflakes made from metal, and huge ice columns. At the heart of the museum is the Snow Crystal Room, which features large pictures of snowy mountain tops and over 200 snow crystals displayed on blue window panes. 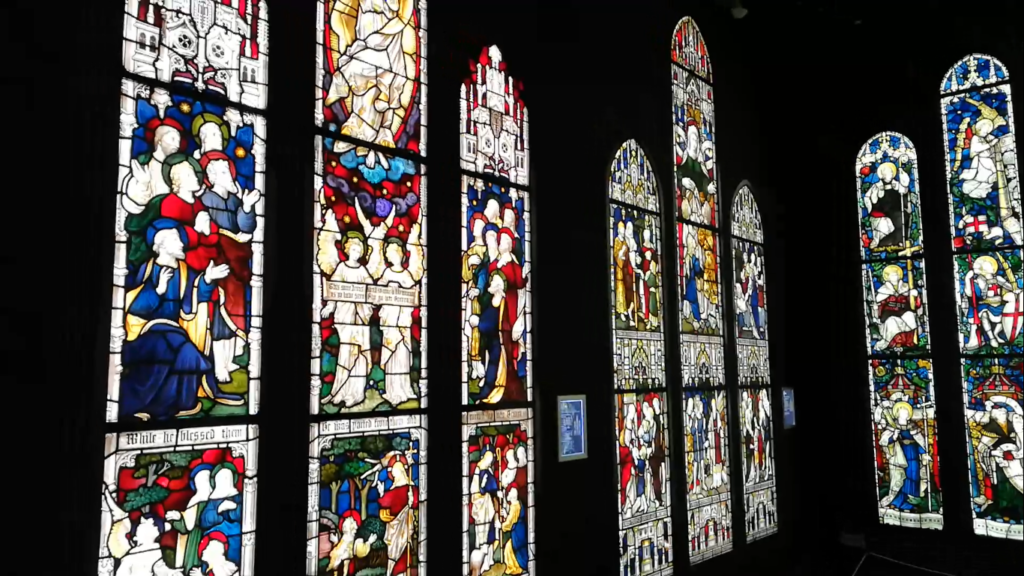 Inside the Stained Glass Museum

Another interesting niche museum is the Stained Glass Museum inside the Otaru Art Base, which features antique stained glass panes from England. Each piece was crafted between the late nineteenth century to the early twentieth century and came from real churches that were torn down. There are other museums inside the Otaru Art Base that you can visit, like the Nitori Museum of Art and the Art Nouveau Art Déco Glass Gallery.

Glass is a popular art medium in Hokkaido, and if you’re interested in giving it a try, there are shops in Otaru that can give you hands-on experience in various techniques. At Otaru il Ponte, for example, you can try glassblowing, which is a technique that involves inflating molten glass to a bubble by blowing into it via a blowpipe. Sounds fun, right? 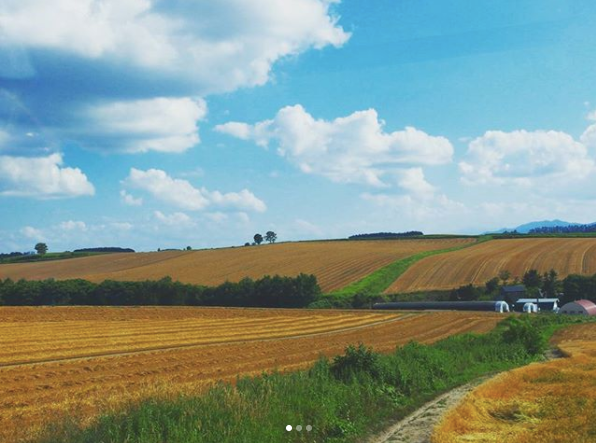 One of the things that will catch your eye while you’re on the plane above Hokkaido is the neat patches of farming lands. Each patch varies in color, from shades of green and brown, and it looks as if you are flying over a giant quilt. The locals call this area of the island Patchwork Road, and it is a very popular attraction among tourists. It’s a very ‘gram-worthy spot to go walking, cycling, or driving with your friends.

Patchwork Road’s stunning scenery has attracted plenty of marketing professionals before, and the area has been used for various promotional backgrounds before. There are a bunch of larch trees on the Mild Seven Hill that are famous for appearing in a cigarette commercial, for example. There is also a poplar tree named Ken and Mary Tree that was featured on a car commercial, and the Seven Star Tree that appeared on a cigarette package.

5. Line up for ramen at lunch

We all know Pinoys have an undying hankering for ramen, so make sure you get to eat a bowl of it while you’re in Hokkaido! If your favorite kind of ramen is miso or hakodate, then the Gansen Ramen Yokocho (Ramen Street) in Sapporo is your best bet. But if you prefer the shoyu-based broths, then head to Asahiwaka! 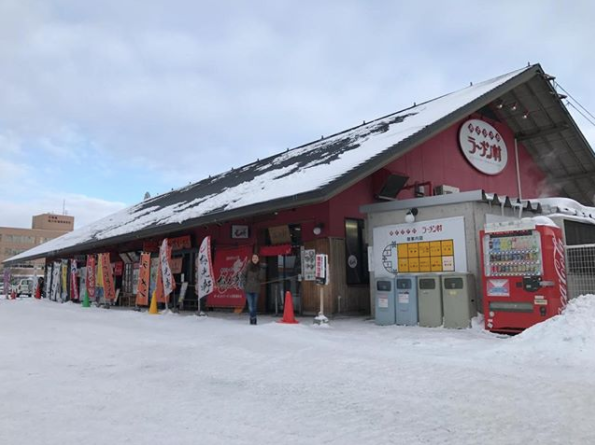 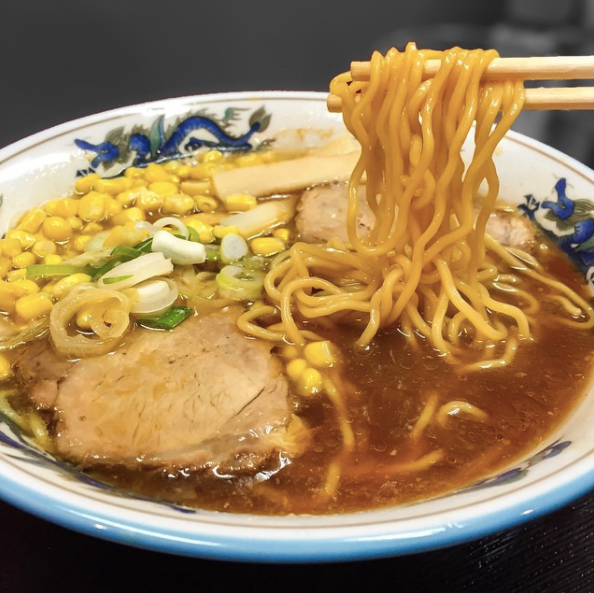 There’s a place in Asahiwaka called the Asahiwaka Ramen Village, where eight of the most famous ramen restaurants in the city have opened smaller branches. If you come at lunch time, you’ll have to line up along with the locals before you can get a seat inside, as it is the usual scenario there.

6. Have a “Kanpai!” moment with the locals

What’s a trip to Japan if you’re not going to drink all the sake that you can? “Kanpai!” is the Japanese version of “Cheers!” and is commonly said at the start of a meal with drinks and/or guests. 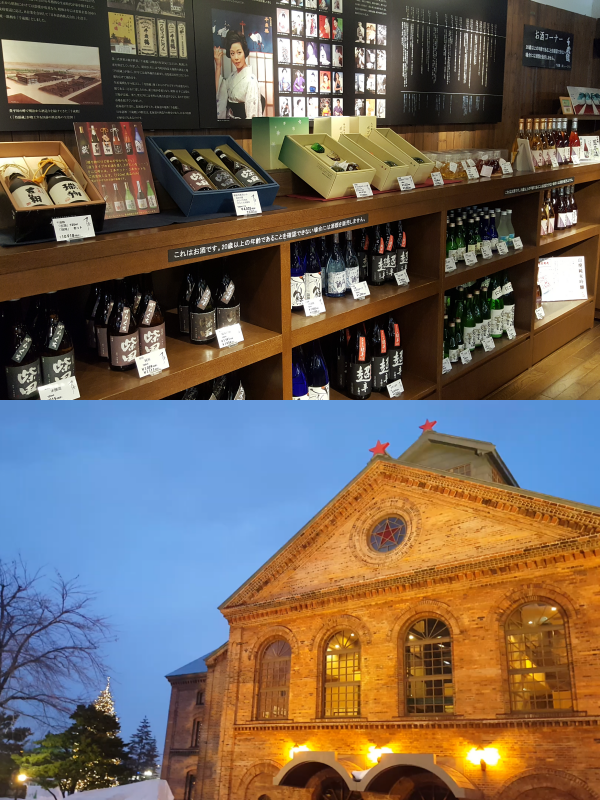 Above: Inside the sake museum Below: Sapporo Beer Museum

While in Sapporo, be sure to drop by the Chitosetsuru Brewery and Sake Museum, the first and only local sake brewery in the city. Chitosetsuru sake has been described as having a refreshing, dry flavor. The brewery has been producing sake since 1872, making it a historical establishment in the area. In the Sake Museum, you can learn about the sake-making process as well as purchase other kinds of sake like ginjo, junmai, and honjozo.

If you’re more into beer, though, then head over to the Sapporo Beer Museum where you can learn about the history of Japanese beer and beer making. Sapporo beer is one of the most popular Japanese beers in both local and international markets, and it is best known for its sweet taste and rich aroma. There’s also a beer tasting at the museum that you can enjoy for a fee. The Beer Museum is located at the Sapporo Beer Garden, a park which also hosts a number of must-try restaurants where you can indulge in a variety of savory dishes after a nice stroll with friends. 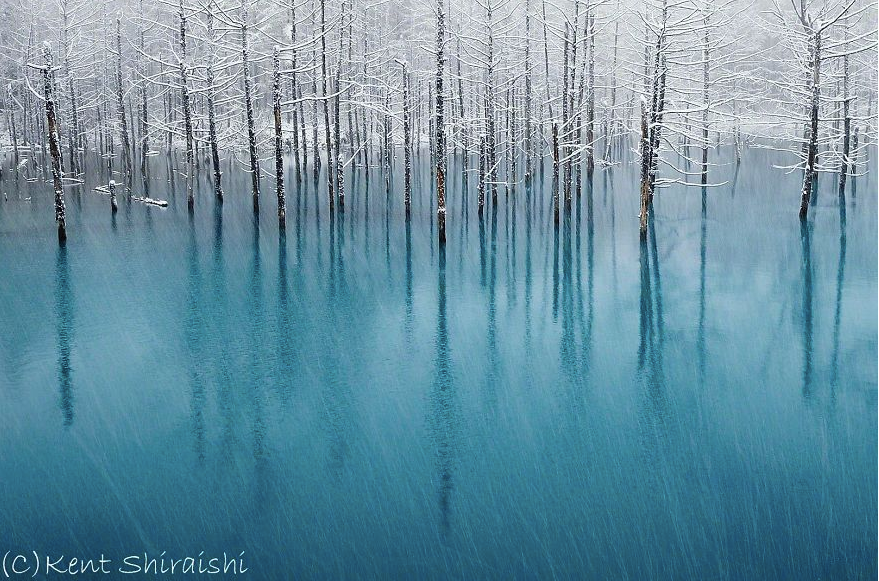 Ever wanted to see a computer wallpaper with your own eyes? You actually can if you’re in Hokkaido! Located in the town Biei, the Blue Pond has been featured in the “Mountain Lion” OS of Apple computers. The picture was taken by Kent Shiraishi, who is a local from the island. The pond is famous for its vibrant and striking blue water that changes color in varying shades of blue depending on the weather and the rows of dead, whitened birch trees that are partly submerged in it.

The pond, which was artificially created when officials decided to build a dam on the Biei river to divert the volcanic mudflow from Mt. Tokachi in 1988, gets its distinct color from components like sulfur and lime. It is open for tourists year-round, but perhaps the best time to visit is in winter, when the pond is illuminated with lights to compliment the snow. 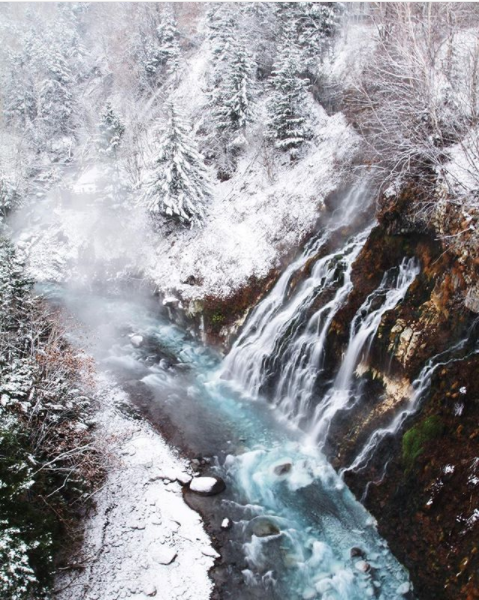 Another stunning area near the Blue Pond is the Shirahige Waterfall, also known as the “White Beard Waterfall” because of how the streams of water flowing down from the mountain resemble wisps of white hair. What sets this waterfall apart from others is that the clear water turns blue once it is collected in the basin beneath. This blue water, like in the pond, is caused by the sulfur and lime from the nearby volcano.

Watch our video below:

Hokkaido is so beautiful in winter! ❄️😍

If you want to make the most out your money on your trip to Hokkaido, book your flights with Jetstar Japan. It’s the only low-cost airline that can get you to Sapporo from Manila via Tokyo or Osaka. From the Narita Airport in Tokyo, Jetstar flies to Sapporo up to seven times each day. You can also book tickets to Miyazaki, Fukuoka, and Kumamoto from Tokyo. Check out their lowest fare options on their website and be sure to sign up for their Jetmail so you won’t miss out on their latest promotions.

Cooking with the Barefoot Contessa during the quarantine