IN PHOTOS: Kento Yamazaki gets up close and personal with fans in this exclusive meet-and-greet event

As many Asian drama fans know, Kento Yamazaki is the talented actor who brought Otaro Dojima to life in the television series, ‘Kiss That Kills.’ And as the show continues to progress, many fans are curious to know what Yamazaki is like off-camera. Is Yamazaki anything like his onscreen persona, Dojima? Does he enjoy portraying such a complex character on Kiss That Kills? What’s going to happen on the show’s succeeding episodes? And what’s his relationship like with his co-stars behind-the-scenes?

Well to put your minds at ease, InqPOP! chatted with the Japanese actor during an exclusive meet-and-greet event last January 21, at The Mira hotel in Hong Kong.

Here are the highlights from that night:

Before fans had an opportunity to sit down and interact with Yamazaki, they were able to partake in a series of activities outside the venue. One of which included writing a personal message for the actor and placing it on the Kiss That Kills Poster. 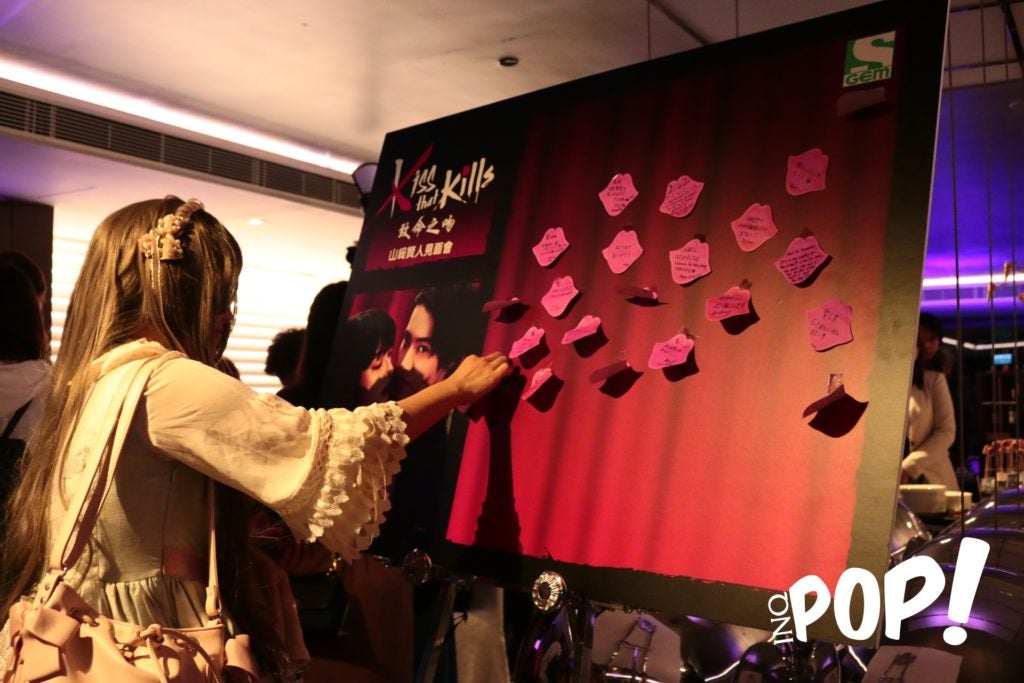 Fans place their special messages for the actor on the Kiss That Kills poster outside the venue. Photo taken by Francesca Militar/INQUIRER.net

The fans also took the opportunity to take photos beside the posters and banners before the event began. Some of them even brought fan signs to hold up when they finally see Yamazaki. 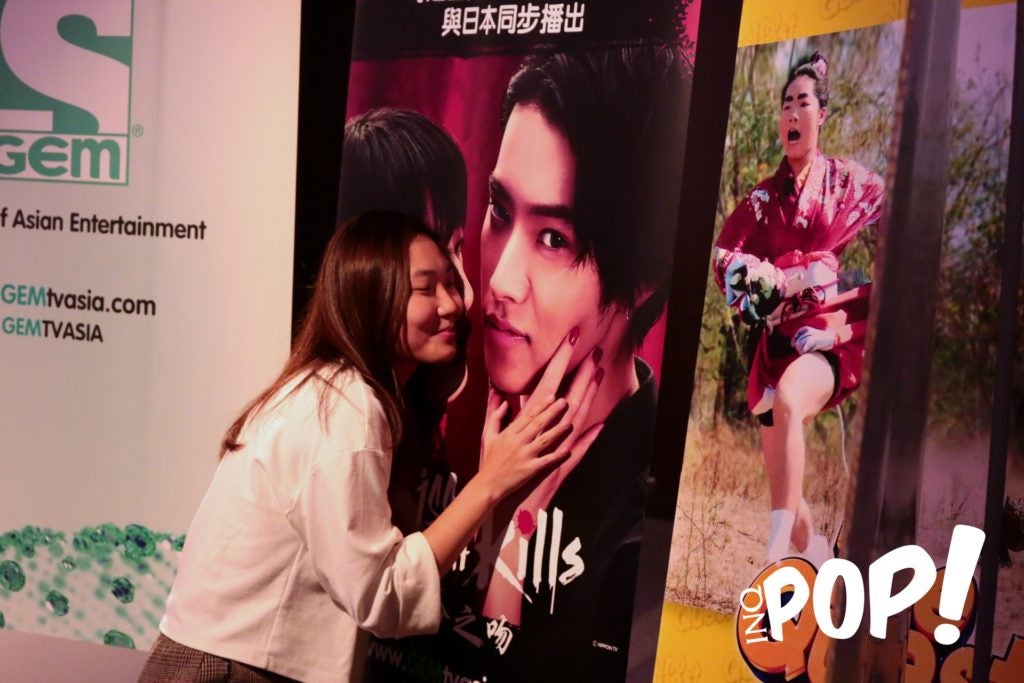 This fan posed lovingly beside the poster of Kento Yamazaki to show her admiration for the actor. Photo taken by Francesca Militar/INQUIRER.net 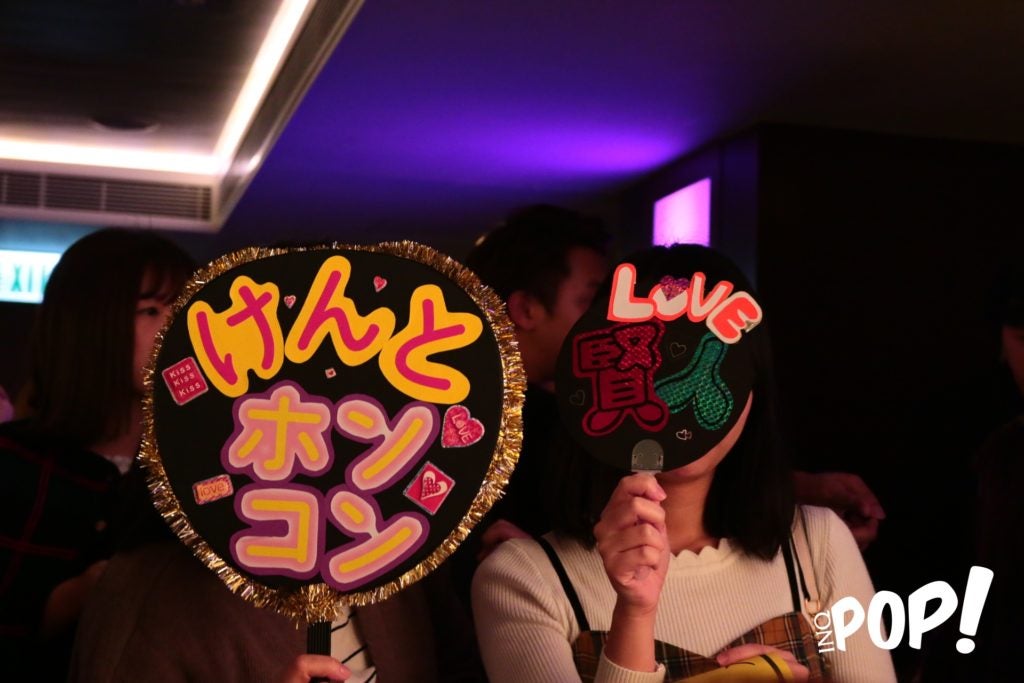 Fans hold up signs to express their fondness for the actor. Photo taken by Francesca Militar/INQUIRER.net 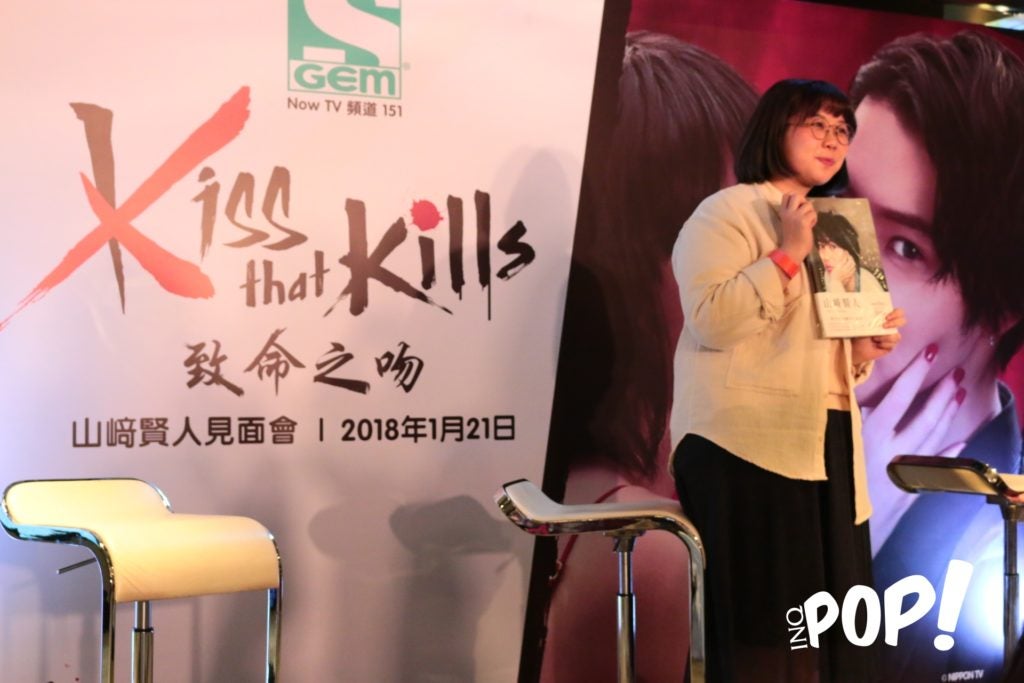 This fan poses for the camera holding a photo of Kento Yamazaki. Photo taken by Francesca Militar/INQUIRER.net

The program began with a short game that required participants to transfer as many seaweed strips from one plate to another using only their lips. The winner of the game received a signed copy of the business card used by Dojima (Yamazaki) in the show. 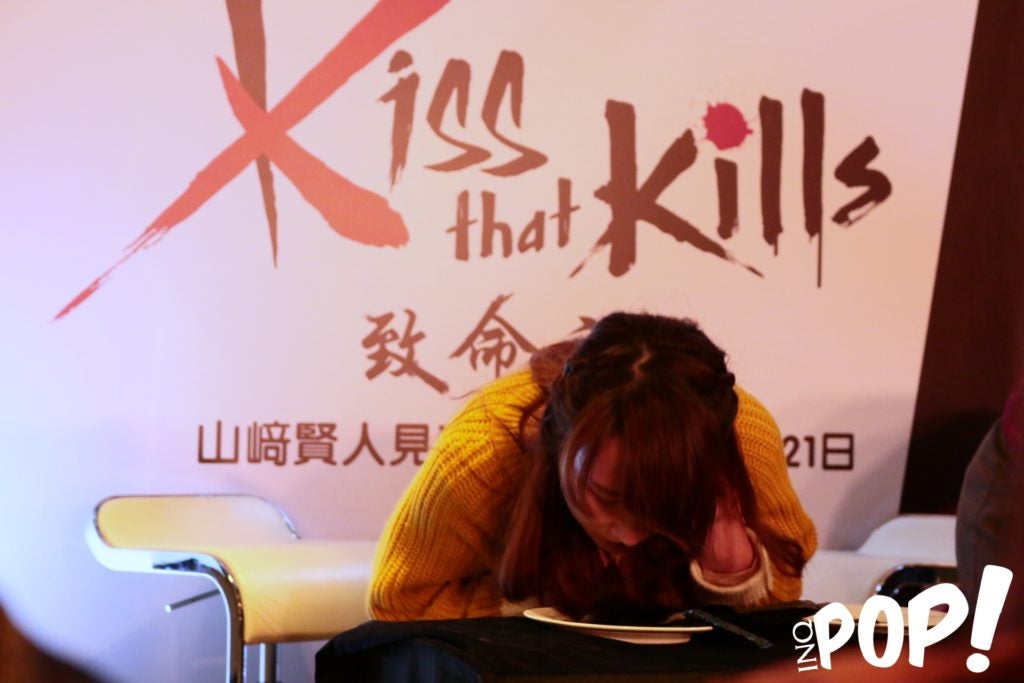 The participant picks up the seaweed strip with her lips and transfers it to the other plate. Photo taken by Francesca Militar/INQUIRER.net

After the game concluded and a winner was chosen, the host gave a short introduction to Kento Yamazaki. Soon after, Yamazaki made his entrance to a crowd of excited fans. 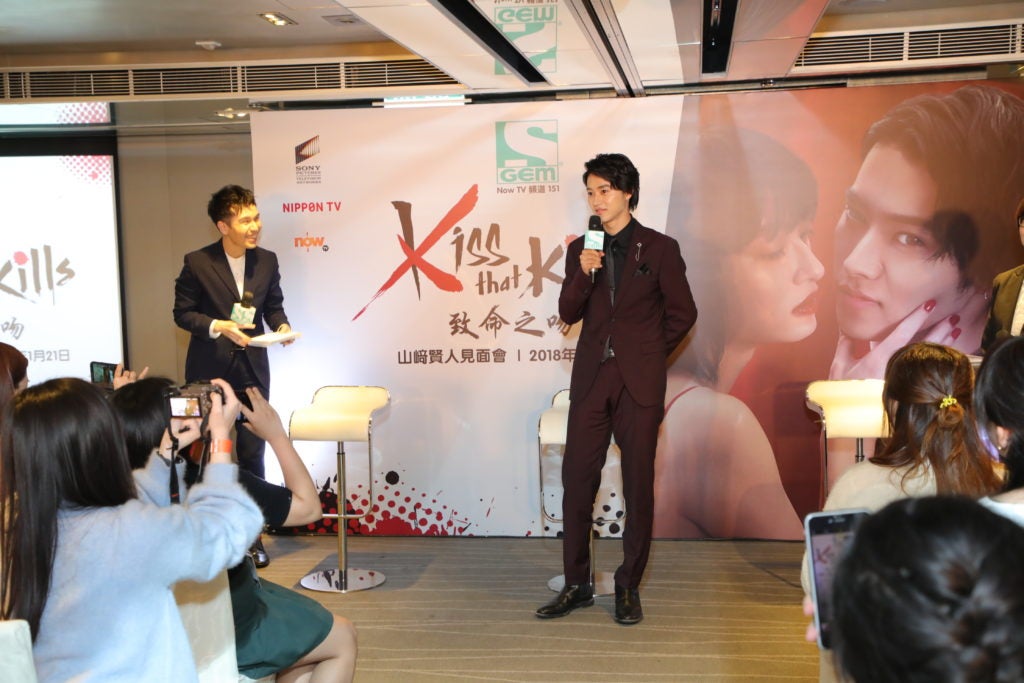 As Kento Yamazaki made his way to the front of the crowd, he greeted fans with “Dai Ga Hou.” Photo Credit: GEM Media Networks Asia Pte. Ltd. and Nippon TV

After the crowd settled, Kento Yamazaki sat down with the host for a short interview. 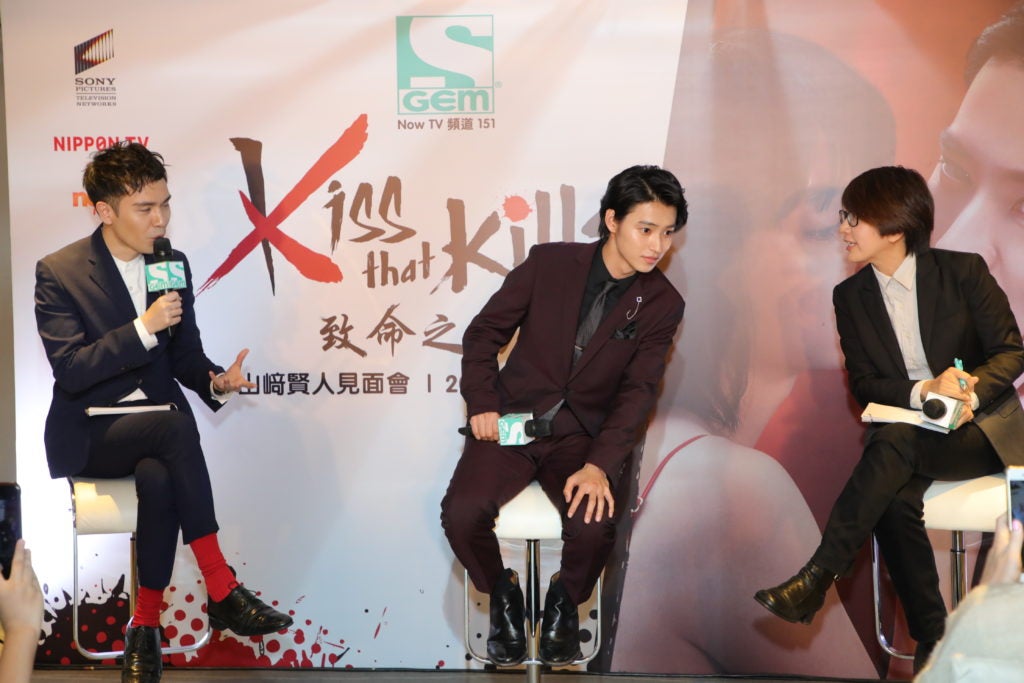 Kento Yamazaki explains how he enjoyed his stay in Hong Kong and that he truly likes the food there. Photo Credit: GEM Media Networks Asia Pte. Ltd. and Nippon TV

Yamazaki shared his thoughts on the character and even revealed two photos from behind-the-scenes. He also admitted how he truly enjoyed the food in Hong Kong.

Later, it was announced that the actor filmed a couple of scenes for the drama in Tsim Sha Tsui. 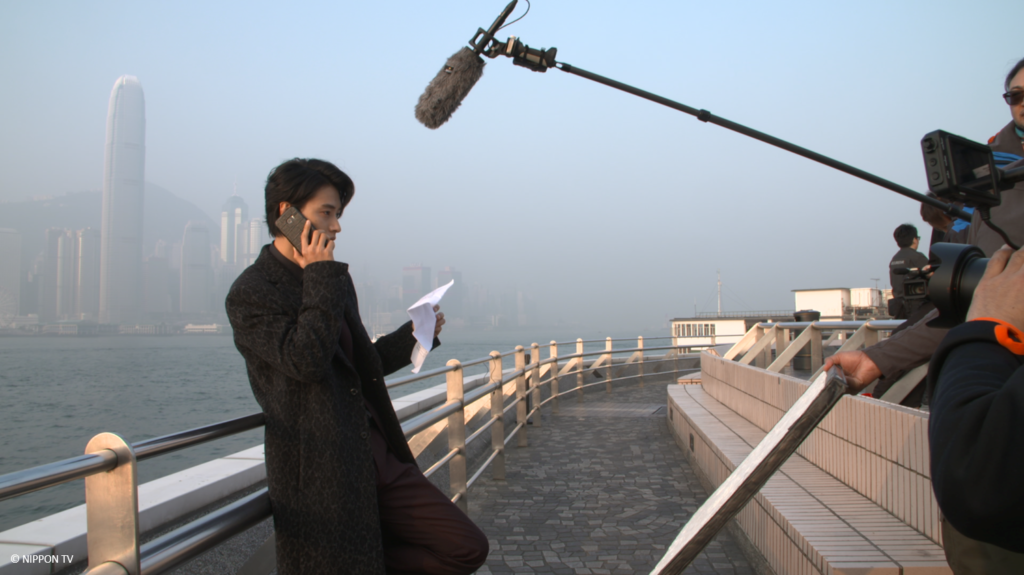 The episode that will feature scenes from Hong Kong will air across Asia on February 11, and it will revolve around the story of finding Dojima’s father.

Videos from the cast members of the show were then shown to the fans and this surprised Yamazaki. 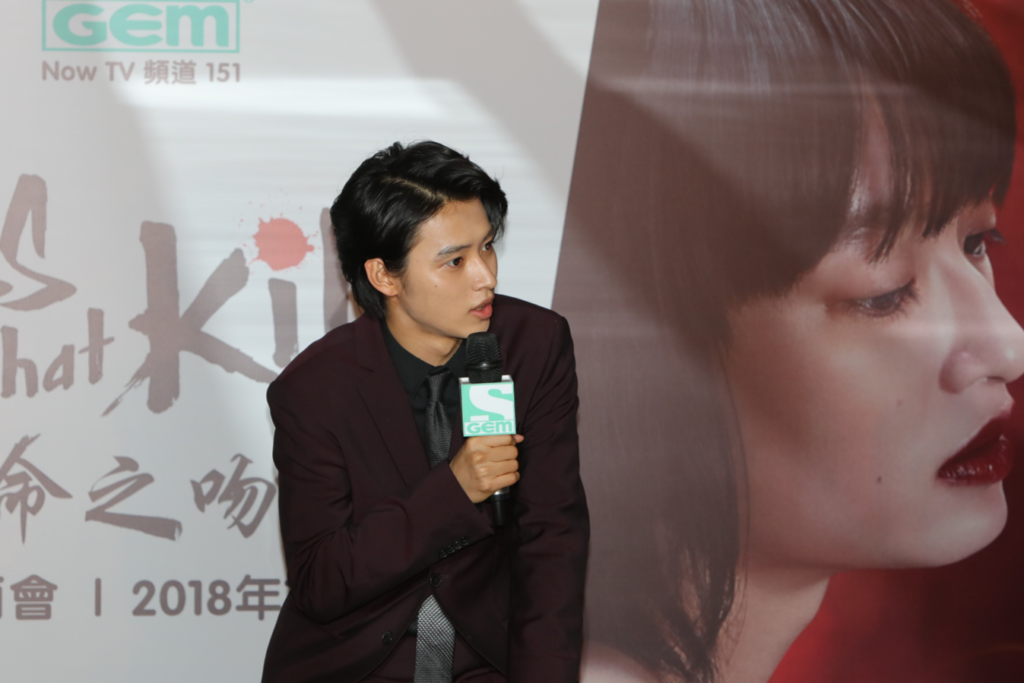 His co-stars — Mugi Kadowaki, Mackenyu Arata, Yuko Araki and Hayato Sano — all wished the best during his stay in Hong Kong and they each shared a small tidbit about the actor, which made fans laugh.

Yamazaki then asked all the fans in the room to join him a short trivia game about Kiss That Kills. In the game, he asked fans a series of True or False questions — in which only real fans of the show will remain.

When there were only four participants left, they were asked to go onstage to play a game of Rock-Paper-Scissors to identify a winner. 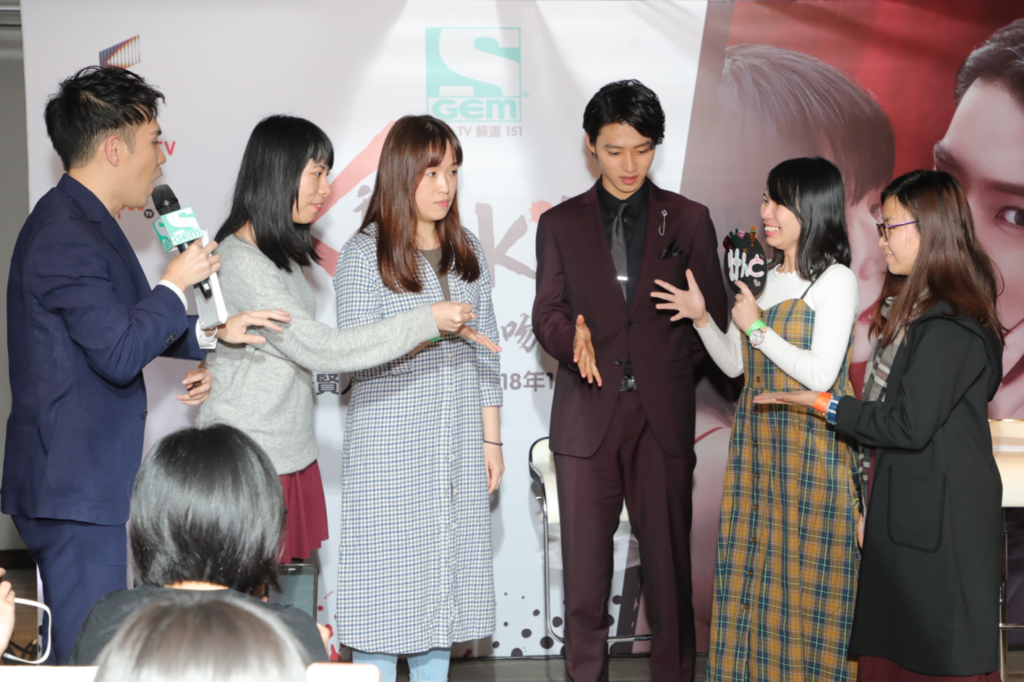 Finally, a winner emerged from the crowd and she was able to receive a signed business card from Kento Yamazaki. 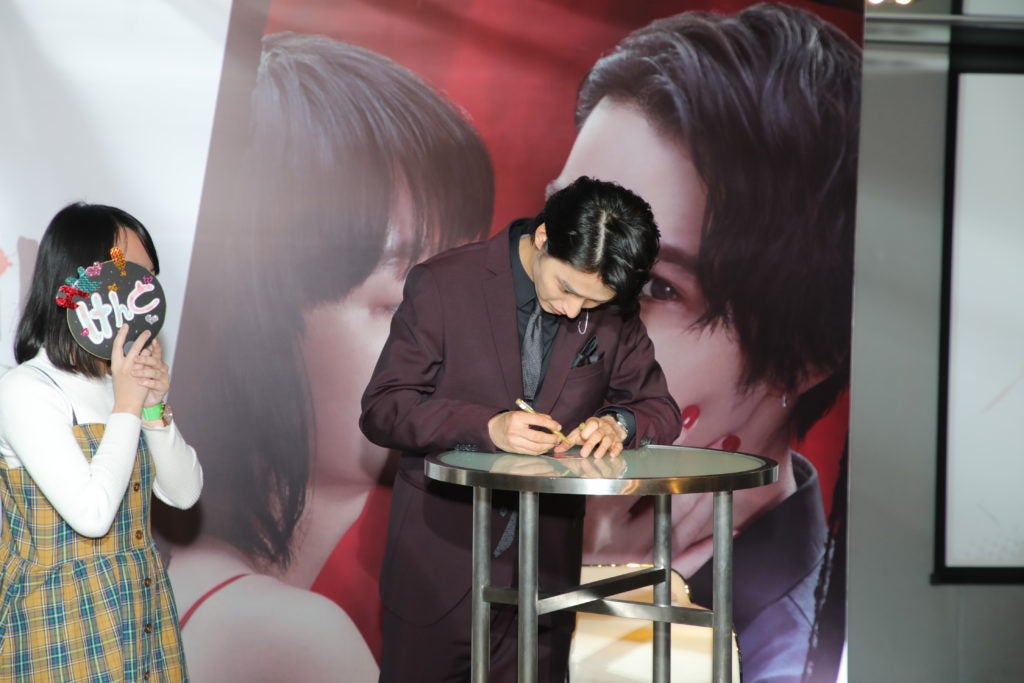 The winner is overcome with emotion as Kento Yamazaki signs the business card in front of her. Photo Credit: GEM Media Networks Asia Pte. Ltd. and Nippon TV

The night ended with a group photo of Kento Yamazaki and the fans from the meet-and-greet. 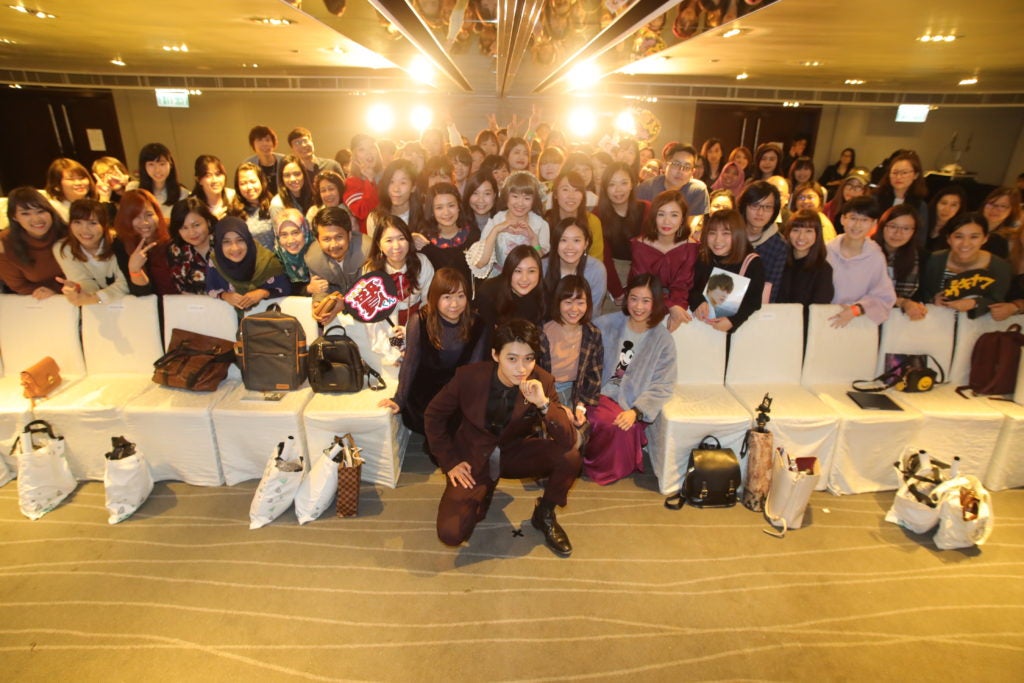 GEM TV is also available on many other cable operators nationwide.

For more details about the show, visit www.GEMtvasia.com.