Social media was abuzz last weekend with screenshots of private messages sent by actor Carlos Agassi to a lot of women. The story is that he allegedly adds women on Facebook and then messages them asking for their number, location, and if they’d want to meet him for a date.

Since being exposed, Carlos Agassi has posted a reaction on his social media accounts, saying that he’s only “a single man living life” and that he is only “enjoying my life as long as I follow by Gods rules and mans rules.” Read the full posts below:

I’m single and enjoying my life as long as I follow by Gods rules and mans rules 🙏🏻 TNx for making me famous on social media 😉 some of them may be true and most not 😉 I’m only human and a man 🙂 so again thank you and if the people I care about are affected I’m sincerely sorry , didn’t want any of u to get hurt 🙂 I’m just a single man living life and hopefully I find my soul mate 🙂 funny thing most of the women there are the ones who messaged me and They just screen shot what makes them look good 🙈 some stories u hear may be true or may be not true 🙂 enjoy and do what makes u happy 🙂 God bless u all, p.s. learned a lot from this so to all the people direct messaging me sorry would love to meet u but can’t baka mamaya u just wanna be famous 🙂 Kanye famous 🙂 love u peace out #tirador #lodi #petmalu #fuckboi just making fun of the stupid situation I put myself into. To those dealing with depression or contemplating to commit suicide, please remember you are loved, don’t let the negativity of the world or other people affect u, remember everyone makes mistakes no one is perfect, so please love yourself 😇you are loved ❤️ To those trying to put others down especially u don’t know them I hope di Po kayo makarma as in Baka di nyo kayanin. And what’s worse u might be the reason the person commits suicide , I pray for your enlightenment even if your catholic or not, there is one true God 🙂 to those haters this is me not making malinis but stating facts 🙂 haha fuck you love your Pambansang fckboi 😂😅🤣😁😎✌🏼 and just so u know I’m a straight forward honest man that respects women 🙂 #hatersgonnahate #loveit lover not a fighter 💕 the art of deadma😘life goes on 😇 Inspired to inspire 😍

Thanks for this weird feeling of embarrassment and happiness. Embarrassed cuz the people I care about are affected and happy cuz I truly now know the people who actually truly care about me 💗 funny thing half of the pics are Masahista and actors sa set namin 🙈not even the person I’m seeing or meeting 🙂 then the rest of the conversation screenshot pics we set up cuz she txted I’m single I can’t add u and I replied ok take out some friends then she said let’s meet at this time then kept changing the time and I was already waiting 🙂 wow, lesson learned , be really careful cuz some people won’t think twice to hurt your feelings or ruin your reputation just to be famous or make themselves look like a babe, I actually told myself cguro pag di hot chick mabait, yun pala yung hot chick mas mabait, and won’t post pics or even take screen shots;) so I guess don’t lower your standards and stick to your type ☺️ maganda, mabait and maalaga 💋 I really wanna post some vids of me making fun of my stupid situation but naisip ko baka masaktan yung mga tao na mahal ko so il just post this 🙂 if you are a single man pls learn from my mistake 🙂 if asking a single girls cell number or asking her out on a date is wrong. I should just probably wait for the right one 🙏🏻all in God’s time P.s I think a group of people who hate me ganged up and collected a lot of material and put much effort to try and hurt me or even more destroy me, I am not sure and nor will I waste time thinking who you are instead I will add you to my nightly prayers that you be touched by the lord, dude or dudes pls love your life , not thru me nor hate me cuz I’m living and enjoying mine. Spread the good vibes and seriously I don’t mind people talking shit about me cuz I know myself but when people I care about get affected I get more affected 🙁 I pray for the strength and guidance to do what is right and to become a Better version of myself ❤️ I appreciate all your positive comments and again thank you all, sorry ulit sa mga nasaktan , Di ko po naisip na may mga gagawa ng ganito as akin at Mali makipag usap sa single na babae.

Netizens took to their own accounts to express their sentiment about the issue. Some people believe that Agassi didn’t do anything wrong and shouldn’t be called out for his behavior:

Wtf kind of article is this? He's just asking for numbers, what's so bad about that? Nakikiuso sa feminism sa US smh. https://t.co/Rw8ap6FPDe

If this issue about Carlos Agassi is a hundred percent true, so what?! it is his sex life. He can sleep with whoever he wants and he isn’t forcing anyone. He might be a fuckboy but hndi sya mgging fuckboy kung hndi kyo nagppafuck😜🙄 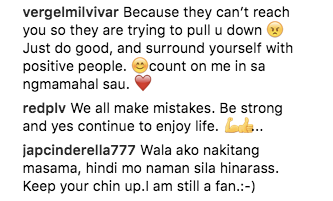 On the other hand,  some people believe that his actions are inexcusable and disrespectful:

How can some people justify what Carlos Agassi is doing? Like saying that it’s the girl’s choice whether she replies or not? He’s sick and perverted. There’s no excuse to his behavior and no girl should be randomly messaged for a one night stand.

This Carlos Agassi thing, all I see is another man using his gender as an excuse for disrespectful behavior. His explanation is pure bull shit and I wish this country could see that this SHOULD NOT BE TOLERATED.

If this issue about Carlos Agassi is a hundred percent true, why are we laughing about it?! Sure, it’s his sex life. He…