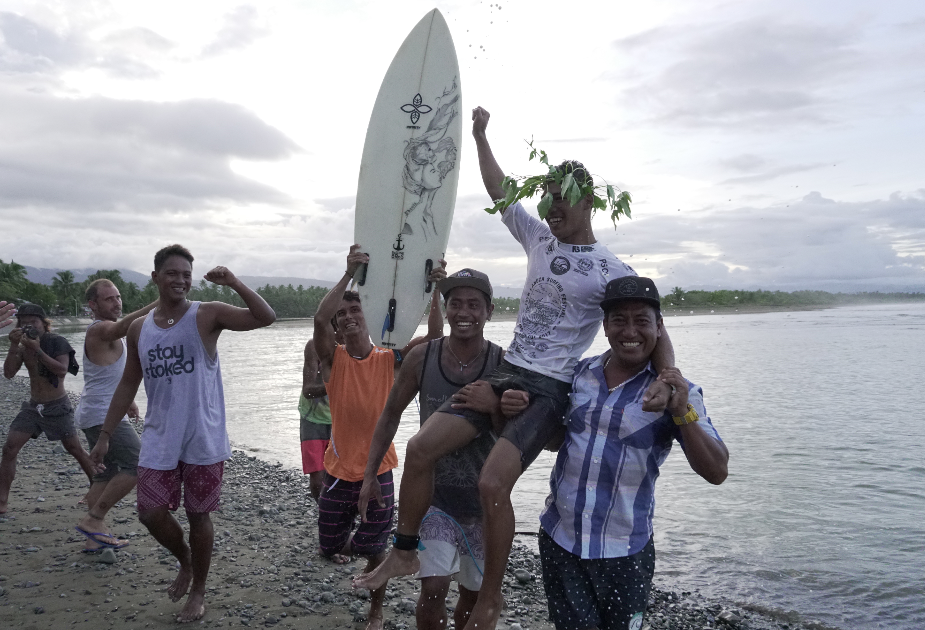 19-year-old Sanchez from Baler claimed the Men’s Shortboard title in a 30-minute duel against current PSCT rank 1 Philmar Alipayo. Sanchez built his momentum all week by practicing and observing the best possible position in Doot Poktoy where the waves were consistent, giving him the advantage to execute his arsenal of vertical snaps and aerials. Sanchez scored 7 during the early minutes of the finals when he landed two 360 aerials on a single wave which gave him a good headstart. He then went after another high scoring wave and landed another 360 aerial. The judges rewarded Sanchez an 8.0 score which sealed his victory over Alipayo.

PSCT Siargao leg Champion and current #1 Philmar Alipayo gave epic exchanges of maneuvers with Sanchez. Alipayo needed an 8.35 score to take the lead but failed to land his aerials to get the scores he needed to advance.

Looking back to the Semin-finals, it was a battle of the goofy footers- Jay-R Esquivel from La Union and Philmar Alipayo from Siagrao. Esquivel was able to put up a great battle against Alipayo but came short during the last minute of their heat. “Sobrang hirap din kumuha ng alon. Buti na lang noong bandang huli, may mga magagandang alon akong nakuha pero hindi kinaya. (It was difficult to catch waves. Good thing I got some good ones towards the end but it was not enough),” said Esquivel.

PJ Alipayo faced Neil Sanchez in the Semi-finals. PJ Alipayo is a well- experienced surfer and has been competing in Siargao every year. Sanchez, who’s been performing well in his previous heat, started to position himself at the middle of Doot Poktoy spot, disregarding the peak where he can have his priority. 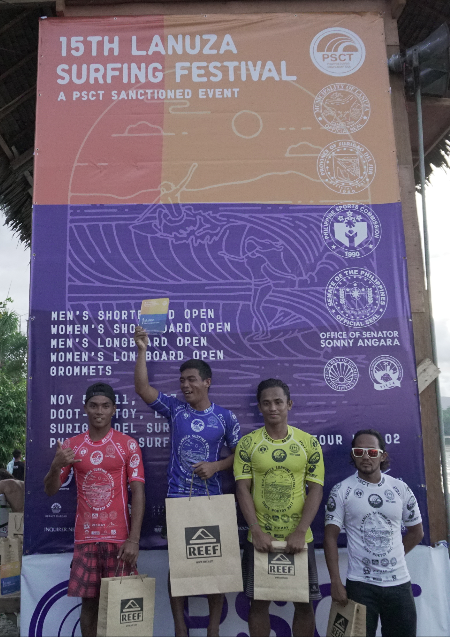 In the Men’s Longboard Division, Mark Aguila from Baler outscored his opponents Loynex Ruina, who took the second place, as well as Benito Nerida and Jeff Dela Torre, both from La Union, for the equal third place. Aguila showcased his classic longboarding style and was able to execute hang fives and hang tens flawlessly. Aguila posted an 8.0 score during the early minutes, the highest average score in his division. 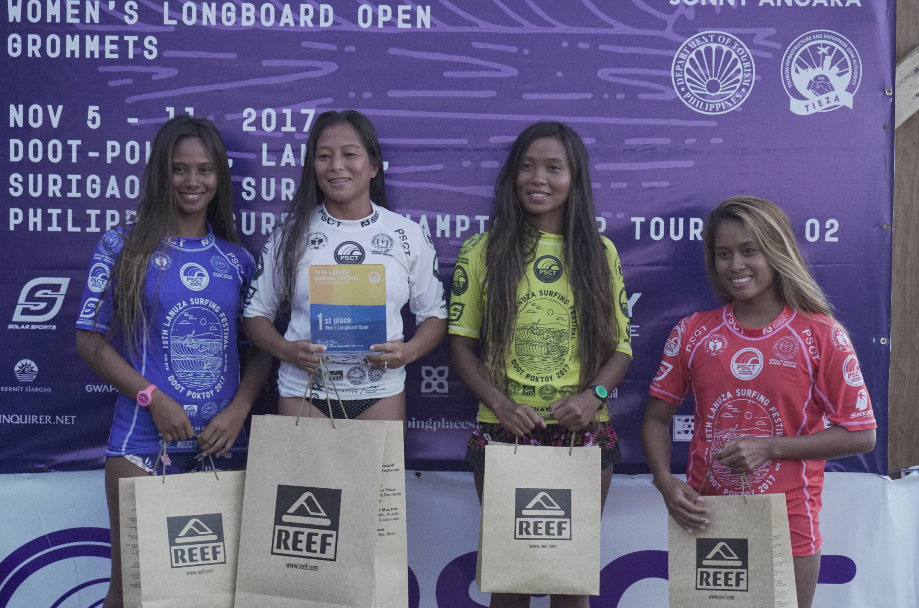 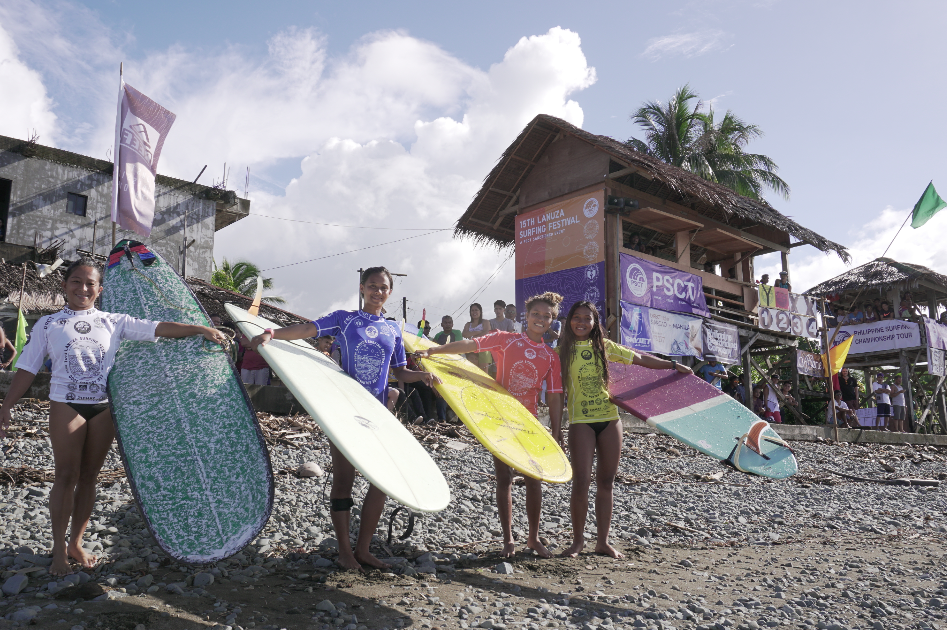 In the Women’s Longboard Division, Daisy Valdez retained her crown as the undisputed longboard champion in Lanuza for years and rose above Maricel Pajares as well as Ikit and Aping Agudo from Siargao. Daisy managed to use her knowledge and experience of the surf spot, having competed in Lanuza for many years.

The Women’s Shortboard Division was dominated by Nilbie Blancada and claimed her victory against Dianne Nogalo, Jolina Uriarte and Pinky Alipayo, all from Siargao. The young wahines did not t hold back against the multi-awarded 2016 Asian Champion, which in return became a learning experience for them, having Blancada as their main surfing inspiration. 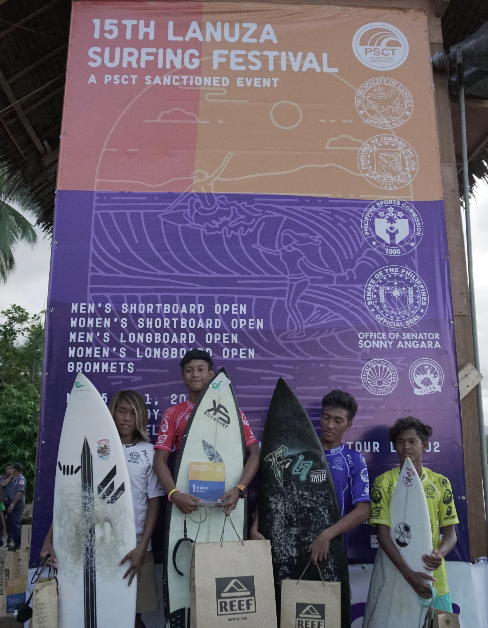 The Grommets (16 & under) put up a great battle. Siargao power grom Gabriel Lerog took the early lead with snaps and cutbacks, claiming his best wave score of 6.25. Christian Araquel took the second place followed by Aram Laudes and John Nogalo for the equal third. At 14 years of age, Lerog is considered to be one of the most promising surf athletes from Siargao. He got qualified to compete at this year’s WSL Qualifying Series in Siargao last month. From there, he adapted quickly and showed a lot of improvements in his surfing skills.