FOX Networks Group Asia (FNGA) announced the winners of The Walking Dead 100 Quarantine Box Game. The contest successfully promoted the 100th episode and season 8 premiere of The Walking Dead on FOX across Asia last October 23rd at 11:30 AM with a primetime telecast at 9:00 PM.

The Walking Dead: Escape Rooms promotional stunts ran from October 21 to October 23 in select Breakout branches where fans of the show were treated to an exhilarating Breakout game. Over 1,000 players found themselves locked in a room for 20 minutes, all provided with clues from the series and non-linear puzzles hidden throughout, given one mission – to escape.

Further to the on-ground efforts of the channel, FOX provided 150 TWD 100 Quarantine box games to trade, affiliate and marketing partners — including the press in pursuance of an immersive and experiential campaign. Each box contains TWD items along with relevant instructions, clues (we mean deciphering codes of different origins, highly analytical tasks, the works.) with an email address to progressively handle the game, all in the hopes of making it to the ‘safe zone’. Partners effectively teamed up when the activity commenced last October 19 at 5:00 p.m., exactly 100 hours before the much-awaited premiere of the show, timed to the tee as the final clue for the game is embedded within the pilot airing of The Walking Dead season 8.

SVP – General Manager of FNG Philippines, Jude Turcuato, said, “FOX takes pride in providing only the best content, and the launch of The Walking Dead Season 8 is a testament to that. After the SEA-wide TWD Escape Room stunt, we went further by extending the activity to our partners who also enjoy the value of the content we offer. A total of 150 boxes were provided to the participating partners across our trade, affiliate and marketing roster.  We really are delighted to share this feat with them, as they continuously remain true fans of our brands. We are happy to announce a number of partners who managed to top the games despite their busy schedules.” 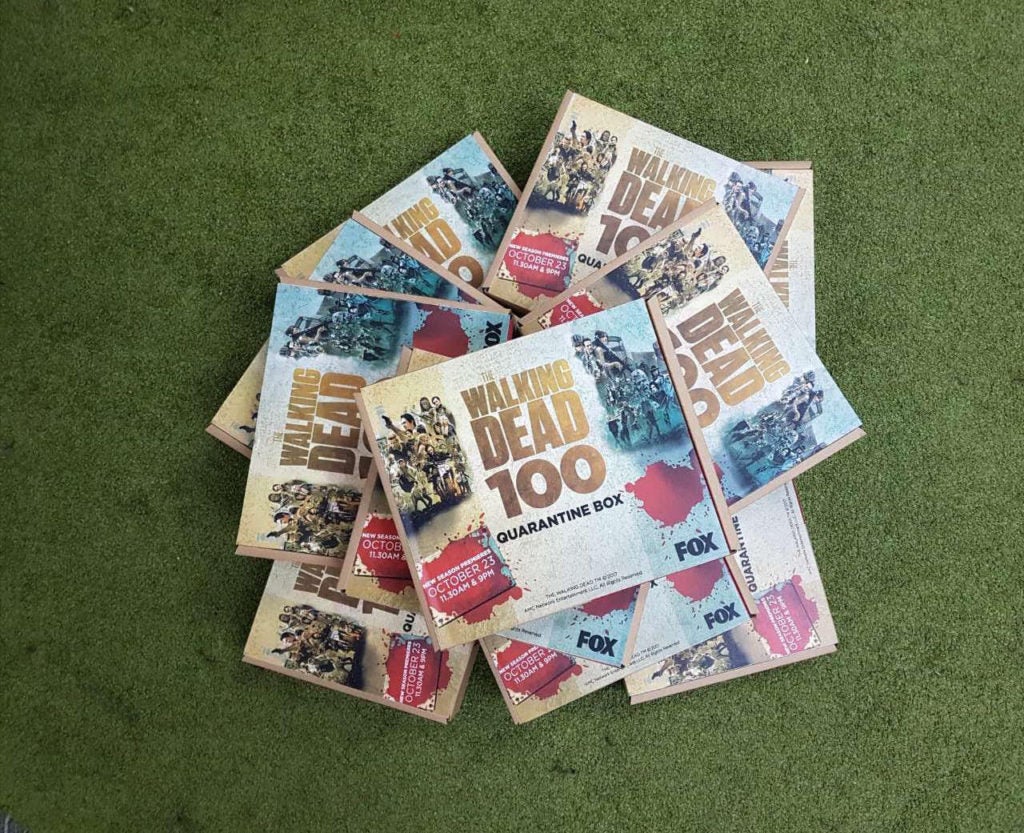 As The Walking Dead officially hits the Philippines — With it comes the final clue flashed on the TV screen. Players from various industries eagerly raced against time to accomplish the final step of the TWD 100 Quarantine box game all armed with the goal of finishing first and  making out alive amidst the Walker epidemic.  Immediately after the 9:00 p.m. primetime replay telecast aired, the game was put to a stop and top winners have been selected.

With the game presenting resounding success in partner relations, FOX will be seeding out the TWD 100 box game once again to fans of the show. Participants for the second wave will be selected via FOX’s Instagram account @foxchannelph soon! For more exclusive stunts, don’t miss the fresh episode premieres of The Walking Dead every Monday, day and date with the US at 11:30 AM with a primetime telecast at 9:00 PM on FOX. The show is also available on demand on FOX+, FNGA’s newly launched video-streaming service featuring an unrivalled combination of content. Binge watch Season 1 – 7 anytime, anywhere on FOX+ in preparation for Season 8.

Cottagecore, the new lifestyle aesthetic that could dethrone hygge