When you’re already dying but food is life. 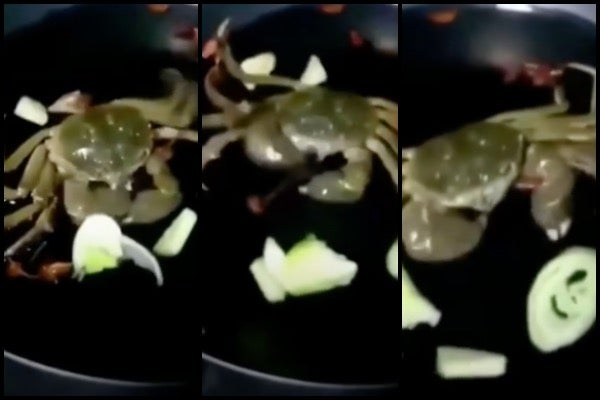 China Global Television Network released a gut-wrenching video of a crab being cooked alive in a pool of oil on top of a stove, scrambling towards the other ingredients in the pan for sustenance during its dying moments. While the video was released with no context, it was purportedly filmed late last month in Changsha, a city in Yunan Province.

Twitter users expressed ethical concerns over slowly cooking a still-living crab in a pan over heat. The video is just one of many videos posted online of sea creatures writhing and flailing about while being cooked alive.

Lesson from a #crab: Don’t waste any second of your life, enjoy food till the last breath pic.twitter.com/4icz2Y6uf5

Early last month, a similar video filmed in Lianyungang, Jiangsu Province of four live crabs being cooked in a hot pot made the rounds online. One climbed out of the hot pot and even managed to turn off power to the stove. Whether the brave crab saved his buddies or not, we’ll never know because that’s where the video ends. He was probably chucked back in by the cook.

And here’s a video of how lobsters and crabs are torn apart while they’re still alive, for their meat.

This one is a footage of a king crab being sliced open by a Chinese chef, after which he ripped the shell right off the struggling crab’s body.

It’s a tough life being a crab.