In Partnership with:
The intensity level was felt at the Cloud 9 tower during every heat yesterday as spectators cheered for their favorite surfers throughout Rounds 4 and 5 of the 19th Siargao National Surfing Cup. At the end of the day, 8 surfers remained for the man-on-man quarterfinals that will take place today and a champion will be decided by the day’s end.
Quarterfinalists are as follows:
Heat 1: John Mark Tokong vs Martin Taniegra
Heat 2: Piso Alcala vs PJ Alipayo
Heat 3: JayR Esquivel vs Edwardo Alciso
Heat 4: Carlito Nogalo vs Philmar Alipayo
When the buzzer signaled the start of Heat 3 of Round 4, Piso Alcala instantly took control, executing flawless barrel rides, powerful snaps and cutbacks against fellow Siargaonons Warren Figuron and Glenn Figuron.  Alcala ended up posting a combined heat score of 17.50 (out of a possible 20 points), the best combined heat score total of Round 4 and the highest of the contest so far. 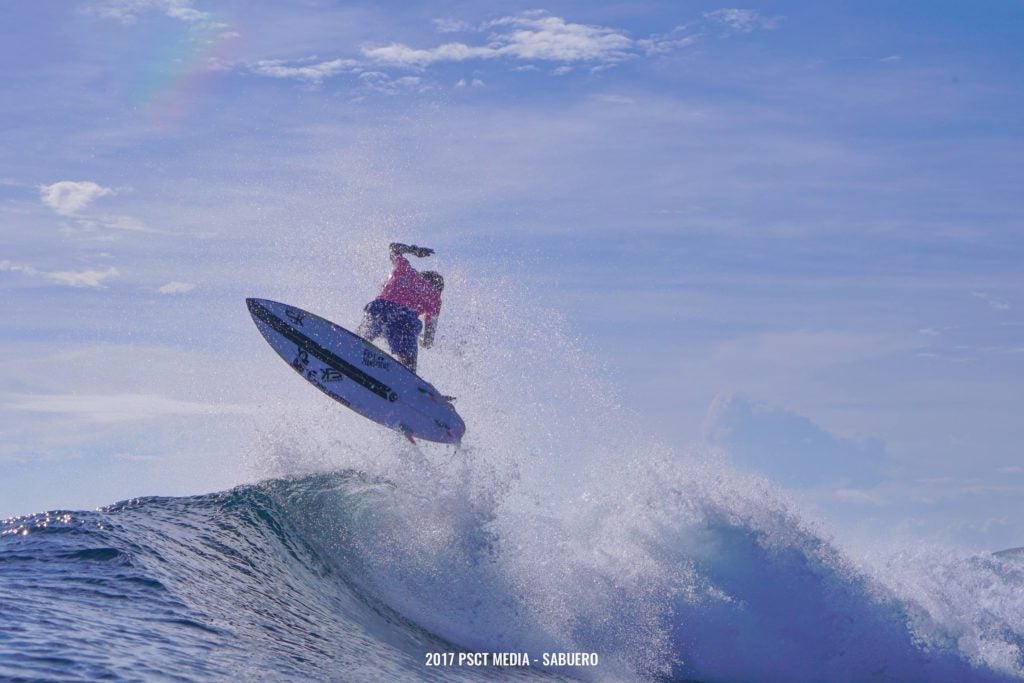 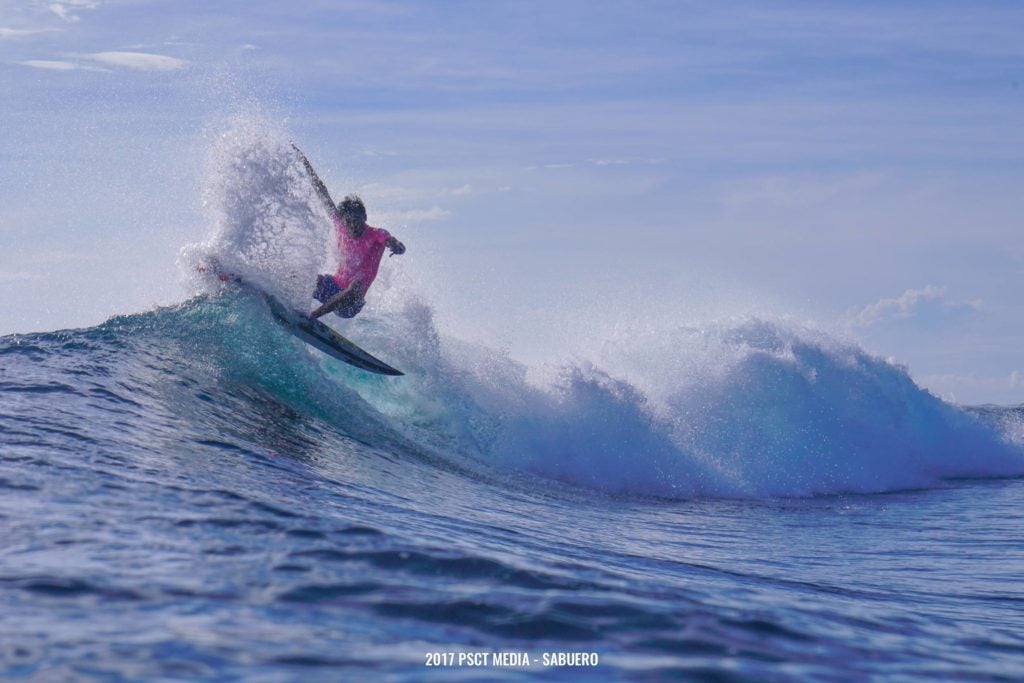 “Medyo mahangin kaya mahirap mag-aerial. Pero nag try parin ako mag execute ng aerial, swerte din kasi na-kumpleto ko yun maneuver,” (It was quite windy so it was difficult to execute aerial manoeuvres, but I still tried and luckily I completed and landed that one) said Alcala.
Alcala has been preparing himself for this year’s National Surfing Cup by doing cardio workouts and stretching every morning and afternoon. “Nagjojogging ako tuwing umaga at hapon. Pinag-aaralan ko ring mabuti yung alon sa Cloud 9 depende sa forecast na dadating.” (I jog every morning and afternoon and I also study the waves in Cloud 9 depending on the upcoming forecast) he explained. 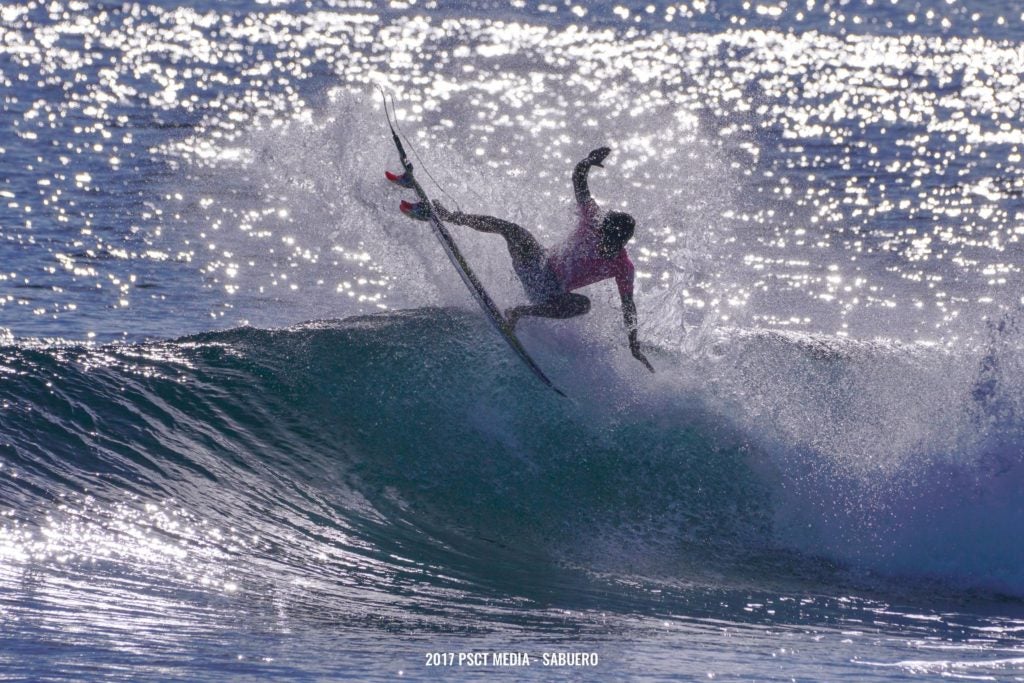 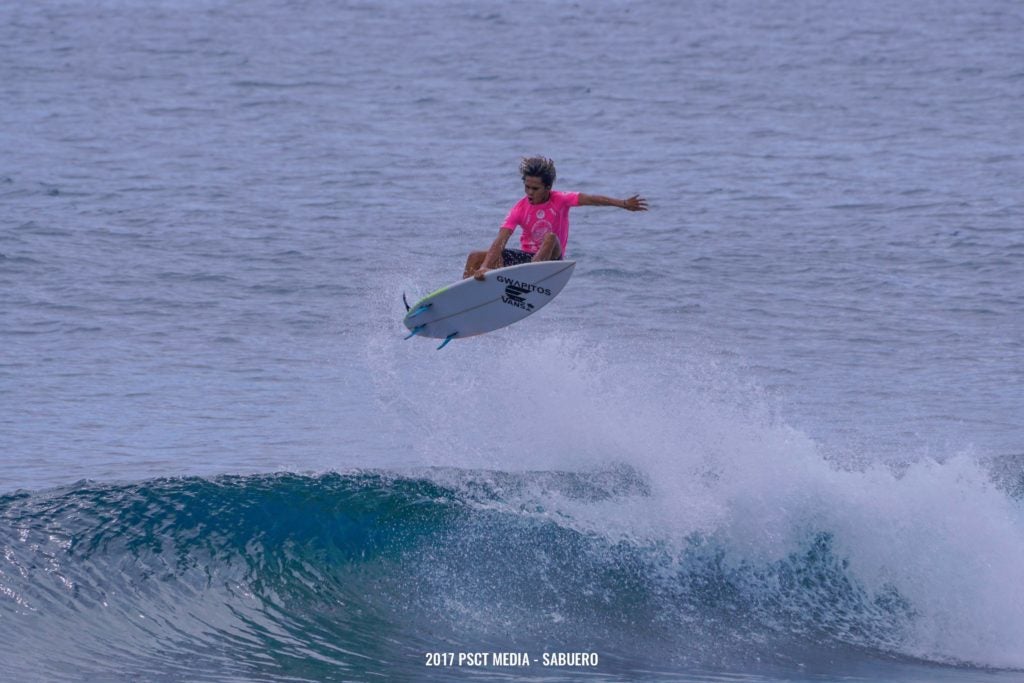 Another local favorite, overall nice guy and last year’s National Champion John Mark Tokong wasted no time getting on the scoreboard in his heat against John Louie Farinas from Zambales in Round 5. Tokong posted a score of 11.50, his overall best average so far, to secure his spot in the Quarterfinals, by taking to the air on numerous occasions while Farinas struggled to find any big scores.
In a battle of East Coast versus the West Coast, regular footer Neil Sanchez from Baler (Aurora) versus goofy footer Jay-R Esquivel from San Juan (La Union) put up remarkable performances during their Round 5, Heat 5 match-up. 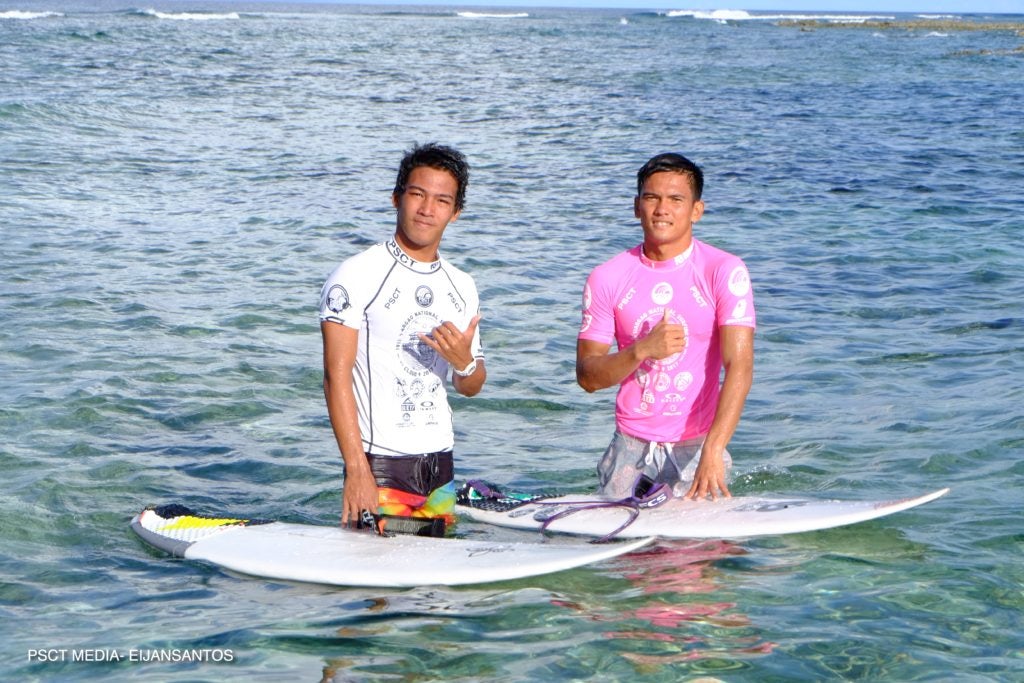 Esquivel took advantage of the Cloud 9 left-hander by scoring a deep tube ride and then some well executed turns. Sanchez battled back with barrels and aerials on his forehand, impressing the judges with his performance. However, during the final minute of their heat, Esquivel used his priority status to hold off Sanchez who just needed a small score to progress. Esquivel ended the heat with a 10.90 total to Sanchez’s 8.80 total, securing himself a spot in the Quarterfinals.
Another noteworthy heat involving a local senior surfer and an up-and-coming junior surfer took place in Round 5, when junior qualifier Remar Magaluna faced off against local surf legend Carlito Nogalo. The heat started with Magaluna pulling into a barrel and exiting cleanly with a powerful snap, earning him a score of 6.00. With decades of experience competing in local and international surfing competitions, Nogalo took his time but slowly built his score but by the time 15 minutes of the 20 minute heat Magaluna was still in the lead. But then when paddling for one of the bigger sets of the heat, Magaluna hindered Nogalo’s ability to catch the wave when it was Nogalo’s priority, thus earning him an interference penalty and consequently losing the heat. 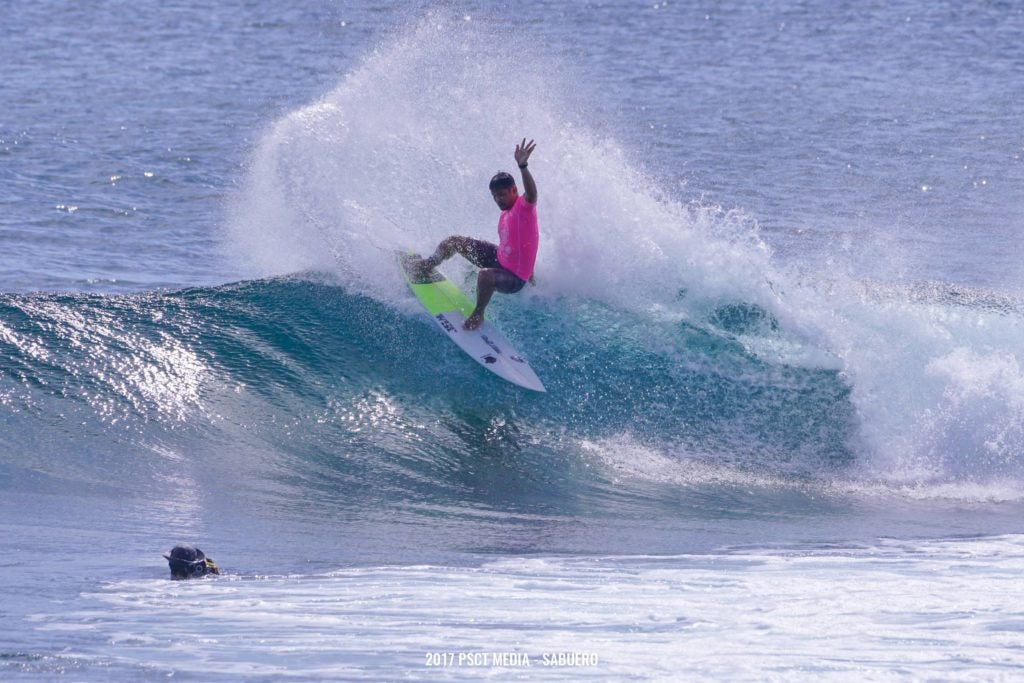 “Sobrang hirap ng alon nung heat namin. Medyo nag struggle din ako para makakuha ng magandang alon,” (There weren’t many good waves during our heat, so I struggled to get a decent wave) said Nogalo. “Nung nakita ko yung priority board na ako yung priority, nag-paddle na ‘ko for a wave tapos nakita ko na nag papaddle din si Remar, parang hindi nya alam na priority ko, nag-paddle ako para makuha yung alon tapos pag tingin ko sa gilid ko, kukunin nya talaga yung alon kaya tumayo na ako tapos tumayo din sya,” (When I saw on the priority board that I held priority, I paddled for a wave but then I saw Remar was also paddling. It looked like he didn’t know that I had the priority, so I paddled harder to get the wave and suddenly I saw Remar close to my side trying to get the wave also, so that’s why I decided to stand up and get the wave), Nogalo added.
“Masaya ako kasi nakaabot pa ako sa Round 5 at naka heat ko din si Carlito kaso lang nagkamali ako kasi hindi ko nakita yung priority board, priority pala niya. Madami din ako natutunan kung heat namin kaya babawi na lang ako next time,” (I’m happy because I was able to reach Round 5 and I was at the same heat with Carlito but I made a mistake, I didn’t look at the priority board and see that is was his priority. I learned a lot from that heat, so that’s why I will do better next time) explained Magaluna.
Today will see the quarterfinals run in the morning, and the plan by the contest director is to hold the semifinals and finals later this afternoon. 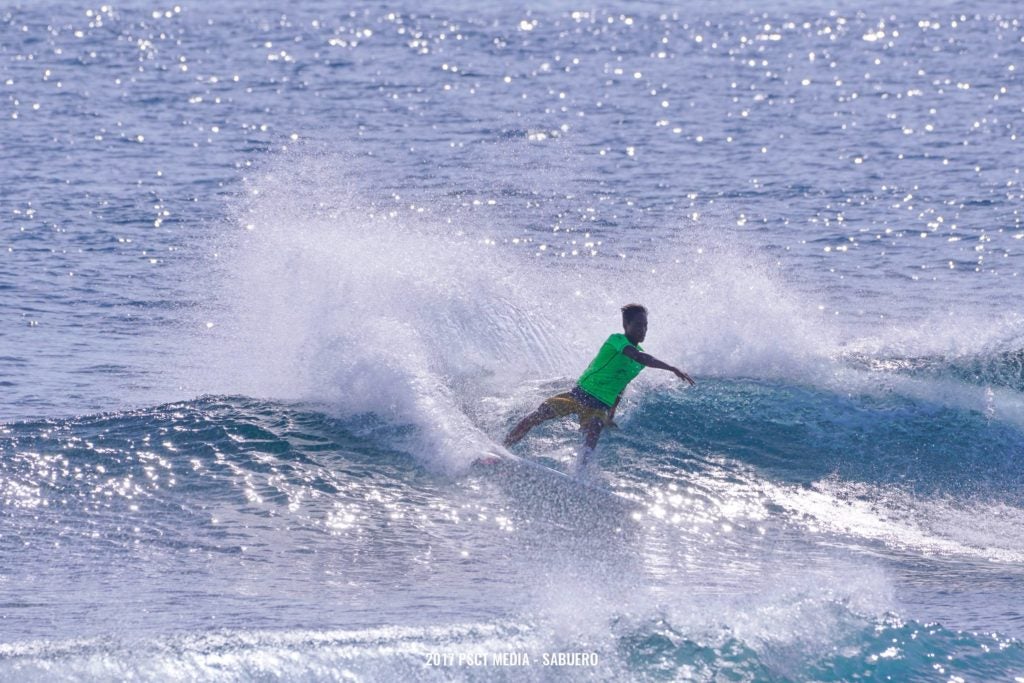 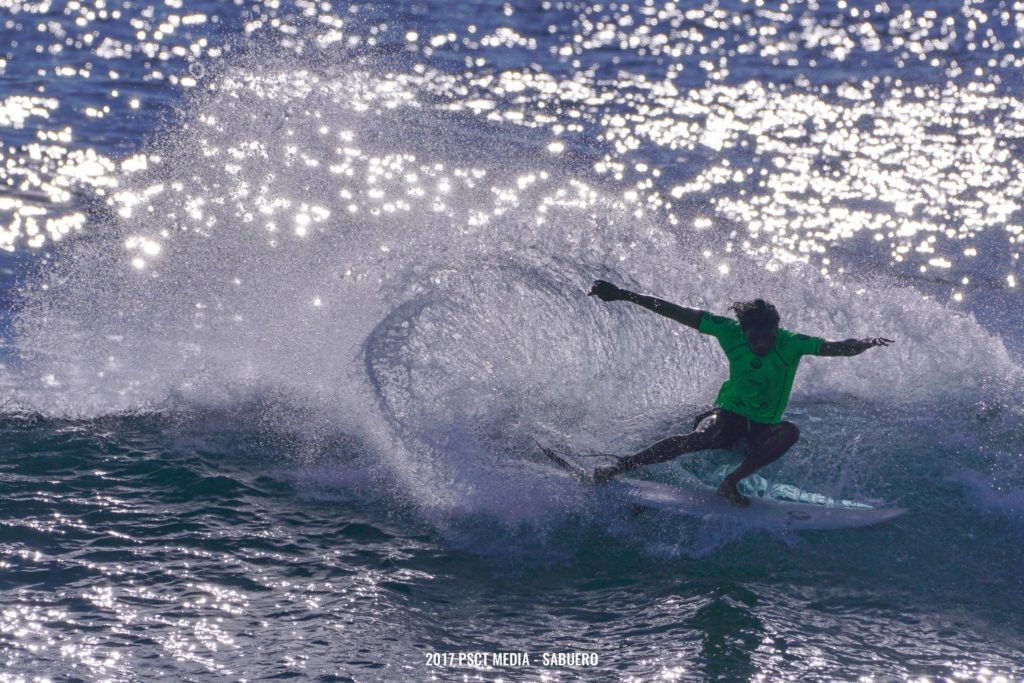