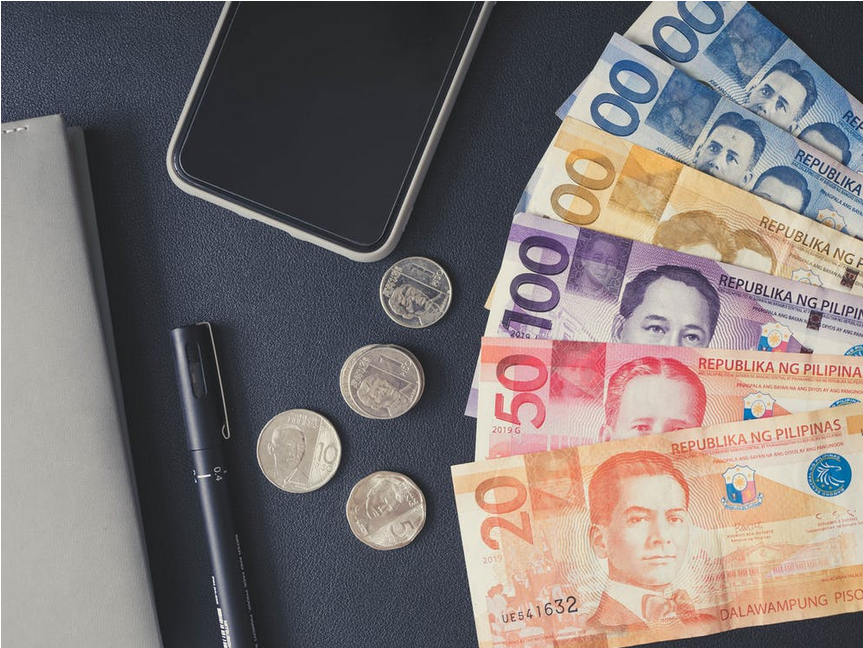 Without even looking at this article’s content and without any context, could you say that P35,000 is a livable wage?

Think about it. If we’re talking about our wages being tax-free and if we were living in a utopian kind of universe, then it could possibly be enough to sustain ourselves. But let’s not kid ourselves here. We’re all paying taxes, one way or another. So there’s that, among the other things that eat up on our savings whether ginusto natin or hindi.

This Facebook post by Jhunel Alivarvar probably sums everything up well—better than how we would have worded it out. The first few lines already ring true if we were brutally honest. “If you’re living in the province, that amount could probably go a long way. But living in an urban area can be a different story as the cost of living is higher.” 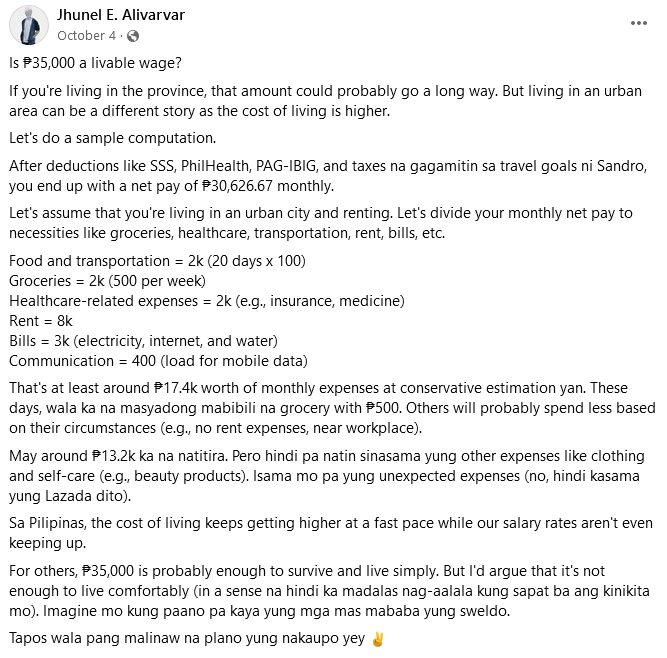 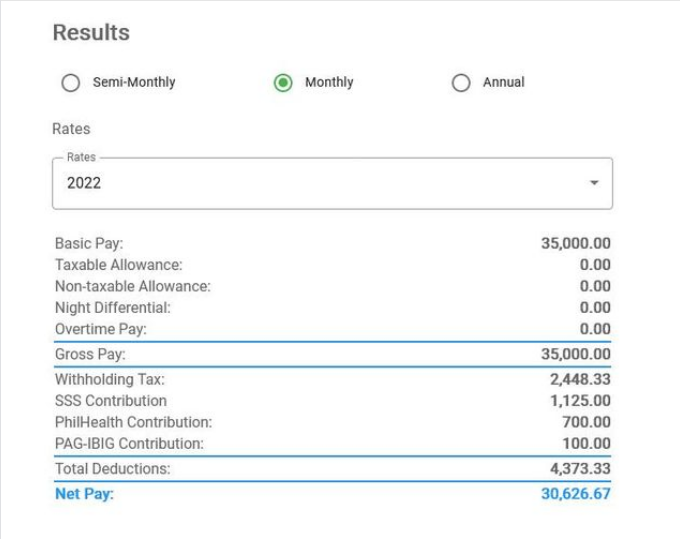 In his post, Alivarvar dissected the deductions the ordinary working-class Filipino receives monthly, which includes the SS, PhilHealth, PAG-IBIG, and other taxes. He also considered the necessities, such as rent, groceries, bills, transportation, etc. In a conservative estimation, he said, it already leads up to a whopping P17.4k, and that’s not even considering the circumstances of other Filipinos yet.

Alivarvar ended his post by saying that P35,000 could be enough to survive, but not enough to live comfortably.

Pondering on what the entire post says, what should we, regular wage-earners, do? Should we continue with our day-to-day “barely surviving” mode and just let things be, or should we fight to make our lives better?

It may seem like we’re out living the life inside a world of “friendly” capitalism and hustle culture, but make no mistake about it–a majority of Filipinos are not getting enough to even live a decent life (food, house, general necessities, and a little of life’s luxuries so we don’t cry every night in abject despair). Stop trying to make yourself believe that what you’re earning now is okay “for now”.

No, what you’re taking home after every half of the month is not enough. It’s unspeakably inhumane, especially with how fast the prices have been going up and how bad our country’s inflation is. The dollar to peso rate is even more abysmal—we can’t just say that our Philippine peso is weak because other currencies keep getting stronger and leave it as if that’s just the way of life.

We’re definitely living in a sad world where the rich keep getting richer and the poor keep getting poorer. Those with money and generational wealth can definitely say that P35,000 is enough and livable, but what about those who have to work hard every month to bring home what they can as breadwinners of the family? Can they say that P35,000 is enough?

No, they can never say it’s enough. The prices back then aren’t the same as now; P500 back then could’ve been groceries for a week or two, now it just amounts for a few days at most.

Related: Check the prevailing prices of food and other commodities in Metro Manila via INQUIRER.net’s Daily Price Watch

It hurts to say it, but Filipinos aren’t living anymore–we’re just surviving, and that’s the sad truth. We can no longer kid ourselves that we can tighten our belts to weather the effects of our downward economy trajectory.

At the moment, what can Filipinos do?

For one, demand accountability from bodies and institutions that are supposed to support and help us. We need better policies in place to help set better wages for Filipinos.

And then, demand better from private corporations and public institutions to start paying better.

Easier said than done, yes, but at this point, something’s got to give because that 35,000, and most importantly, today’s 14,000-peso minimum wage, are no longer enough. And we need to start accepting that. 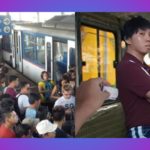 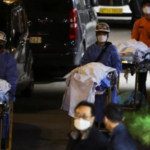