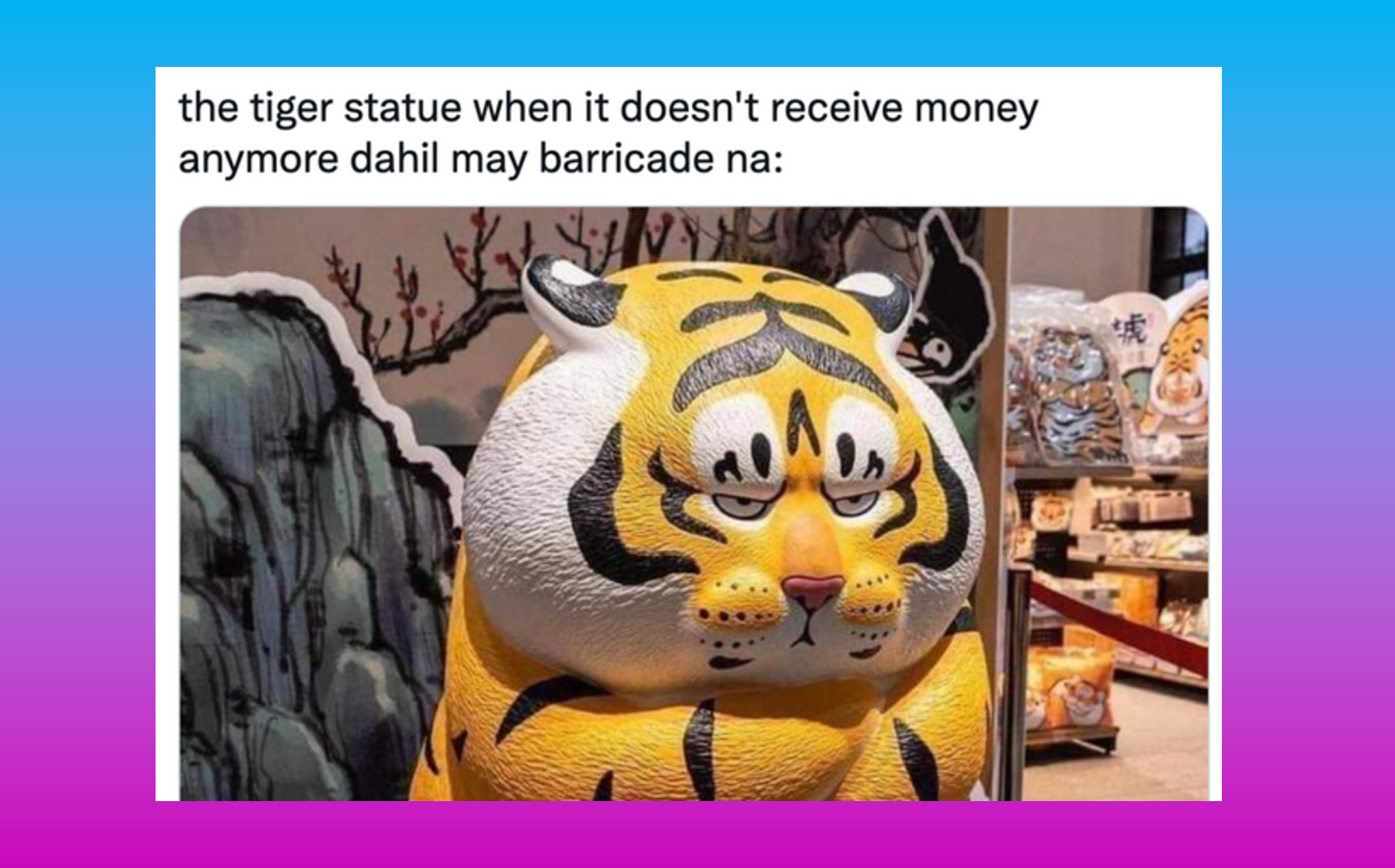 Last month, the University of Santo Tomas (UST) unveiled its new tiger statue, an upgrade since the new statue now closely resembles a real tiger. Located at Plaza Mayor inside the premises of the university, the Bengal tiger statue has recently gone viral after students used it as sort of a “wishing well,” leaving an assortment of items inside the tiger’s mouth or base–from coins, sticky notes, bills, and even packs of pancit canton–in the hopes of attracting good luck for the preliminary examinations.

GO GET THAT CALAMANSI 🐯

Today marks the beginning of Prelims season. And in true Thomasian fashion, students come up with new superstitions at the new tiger statue as the community's good luck charm.

So my alma mater's mascot is a tiger. #GoTigers!

There's a new tiger statue at the central plaza and students have started putting food in its mouth for good luck and better grades. 😂#GoUSTe 🐯💛 pic.twitter.com/NWbEb8hrGc

There were even reports of students offering their debit or credit cards to the tiger, perhaps with the notion that the higher the amount, the higher their grades would be.

LOOK: The new tiger statue at the Plaza Mayor has seemingly become a wishing well for Thomasians this prelims week as test takers fill its mouth with coins.

Good luck with your exams, Thomasians!

Funny, yes. Weird, also yes. Whether it’s a favorite sock or a little trinket, we all want to believe that there’s something out there that can give us luck when we need it. But this thing that’s happening to UST isn’t exactly unfounded in its nature, as humans are just superstitious beings by design. Although lucky charms are just superstitious beliefs, there have been studies that found that people who believed their luck is boosted experience greater “self-efficacy”—belief of being able to accomplish goals—and that belief boosts mental and physical performance. The boost in performance gives us confidence to set higher goals, expectations, and to persist longer at a task resulting in better performance, almost functioning as a switch or trigger to execute a goal.

However, UST Facilities Management Office director Fr. Dexter Austria O.P. went online to express his opinion on Facebook regarding the matter, reminding students that the figure “is not an object of devotion,” and stating that “more than our moral obligation to take good care of our properties in UST, Catechesis is urgently needed if we want to be faithful to the Church teachings as Thomasians.”

Fr Austria added to “pray to God through the saints for intercession instead. #justsaying.”

Fr. Dexter Austria, O.P., director of the University's Facilities and Management Office, earlier urged Thomasians to "pray to God through the saints for intercession" instead of placing coins on the Tiger's mouth as it is "not an object of devotion."

Filipinos on Twitter had mixed reactions to the post, with some agreeing with the director about staying true to tradition and religious practices of the church and maintaining the sanctity of their faith. 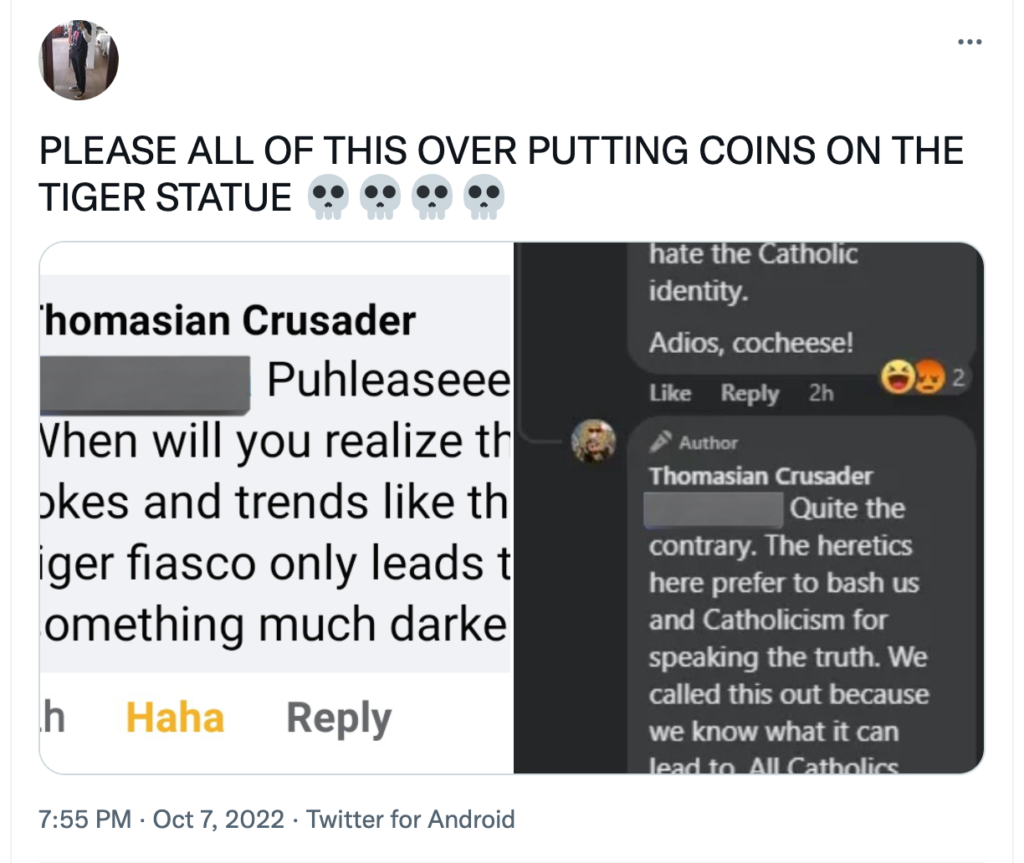 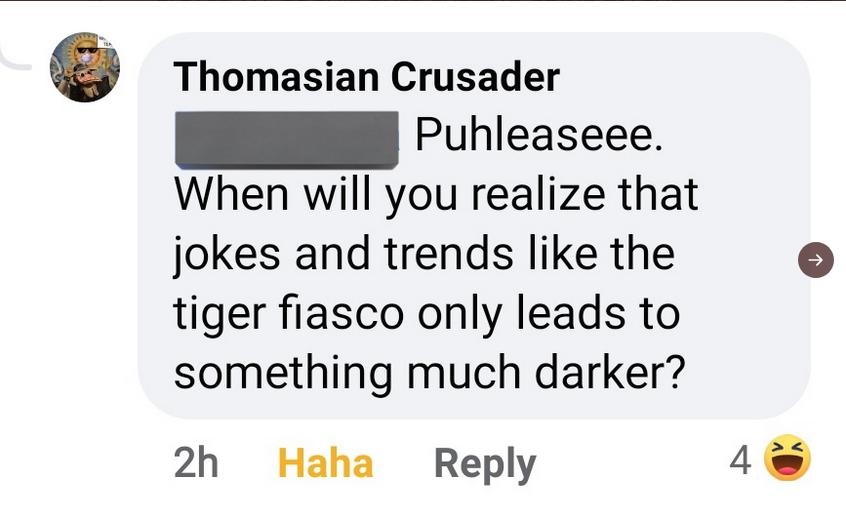 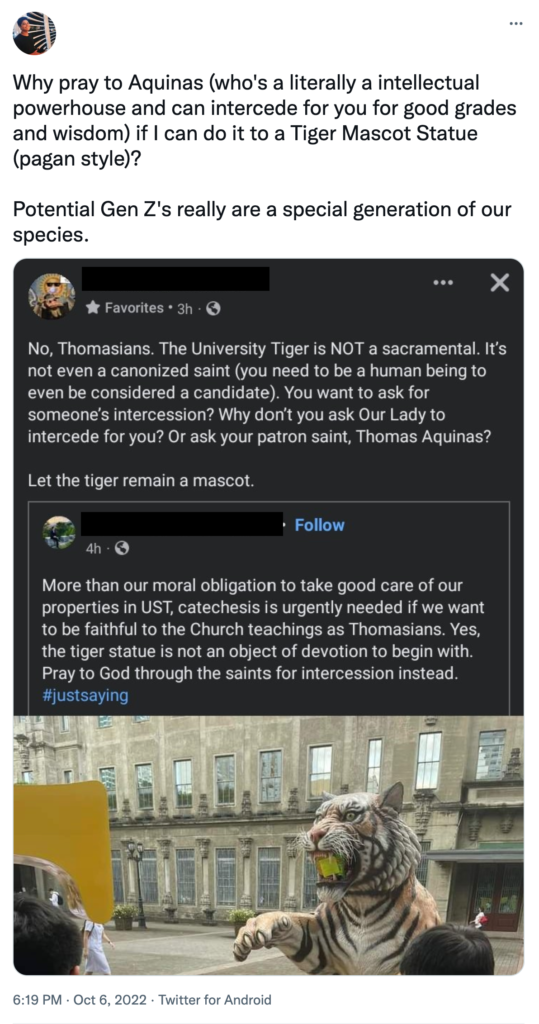 Others, including students, argued the tiger statue doesn’t deserve the seriousness people were showing it, stating that there was an understanding that it was merely a joke or a meme, or perhaps a coping mechanism on full display.  The UST tiger statue, in some ways, has given stressed UST students a wholesome respite, a momentary source of fun and distraction in a difficult examination week. 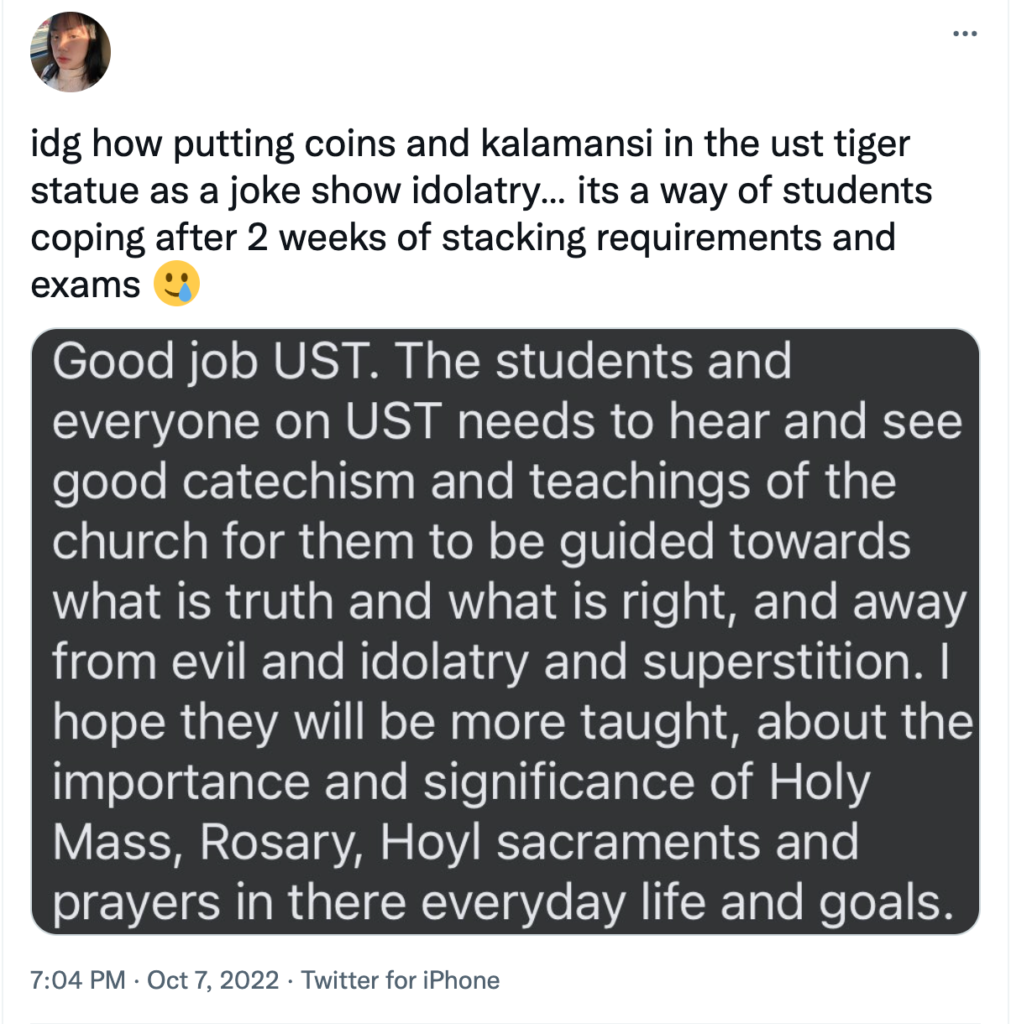 Since then, the items that were previously left at the statue had been collected and the tiger statue has been barricaded with stanchion barriers to prevent students from leaving any kind of item, effectively ending the UST tiger statue’s wishing-for-good luck myth. But apparently sudden urban legends are a common thing in the university.

LOOK: UST has barricaded the tiger statue at the Plaza Mayor with stanchion barriers and removed the coins placed in its mouth after it became a make-believe wishing well for Thomasians this prelims week. pic.twitter.com/OCmBjaW8GZ 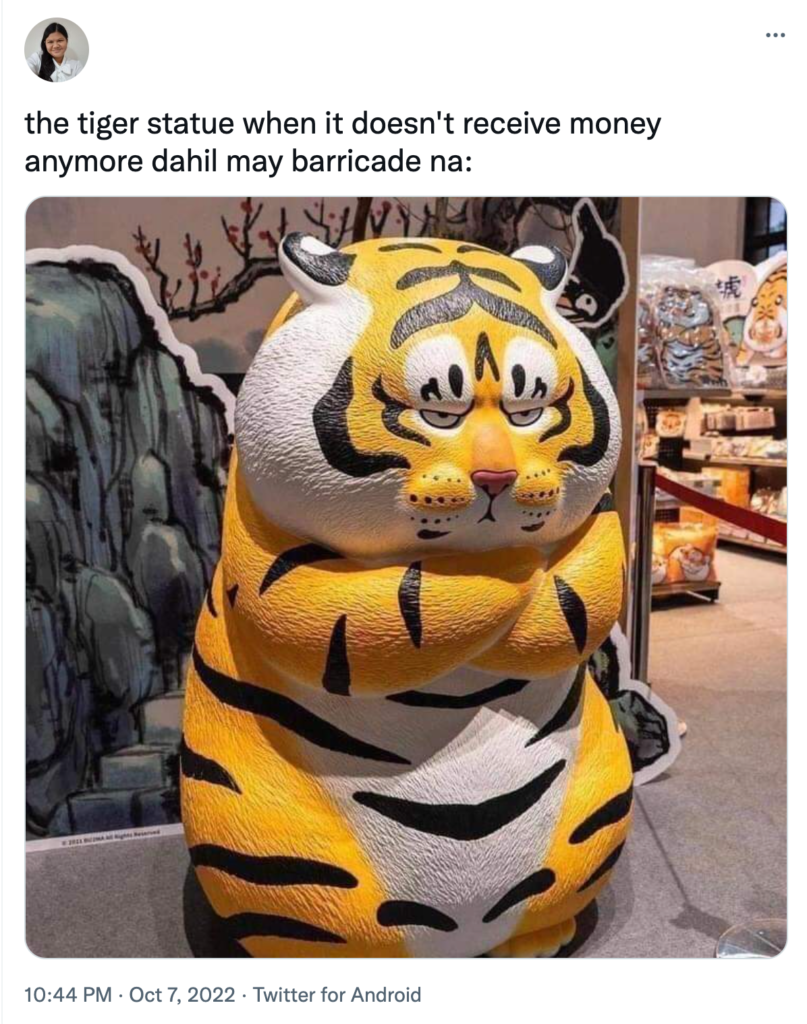 UP Pride 2022 to encapsulate pride’s role in their movement with the theme ‘Itutuloy, Itatagumpay’ 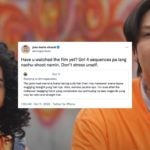 Philippine Entertainment has a weird relationship with brownface, and it shows 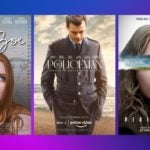