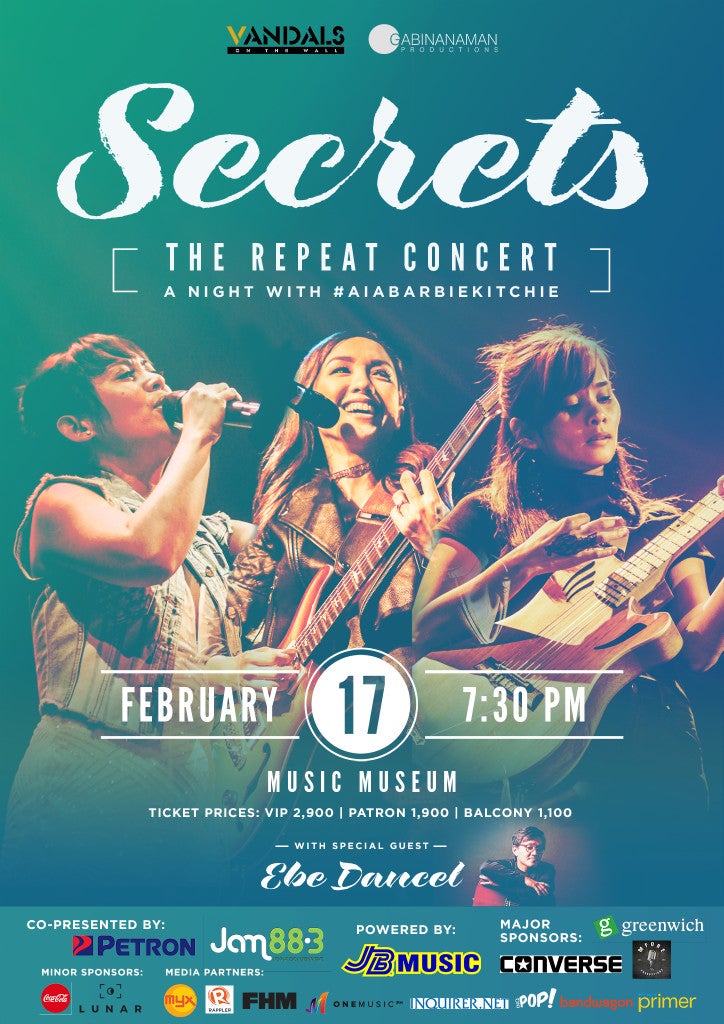 After the successful turnout of their first major show as a trio, Aia de Leon, Barbie Almalbis and Kitchie Nadal are back in the big stage for Secrets: The Repeat Concert. The Valentine’s-themed concert will be held at the Music Museum on February 17, Friday at 7:30 pm.
Get ready to sing your hearts out as your favorite alt-rock icons join forces once again to celebrate their staying power and lasting impact in the local music scene.

With anthemic hits that provided a soundtrack to an entire legion of Filipino music fans, Aia, Barbie and Kitchie promise to deliver intimate, powerful and captivating performances that would surely triumph its predecessor in terms of choice cuts and production values. 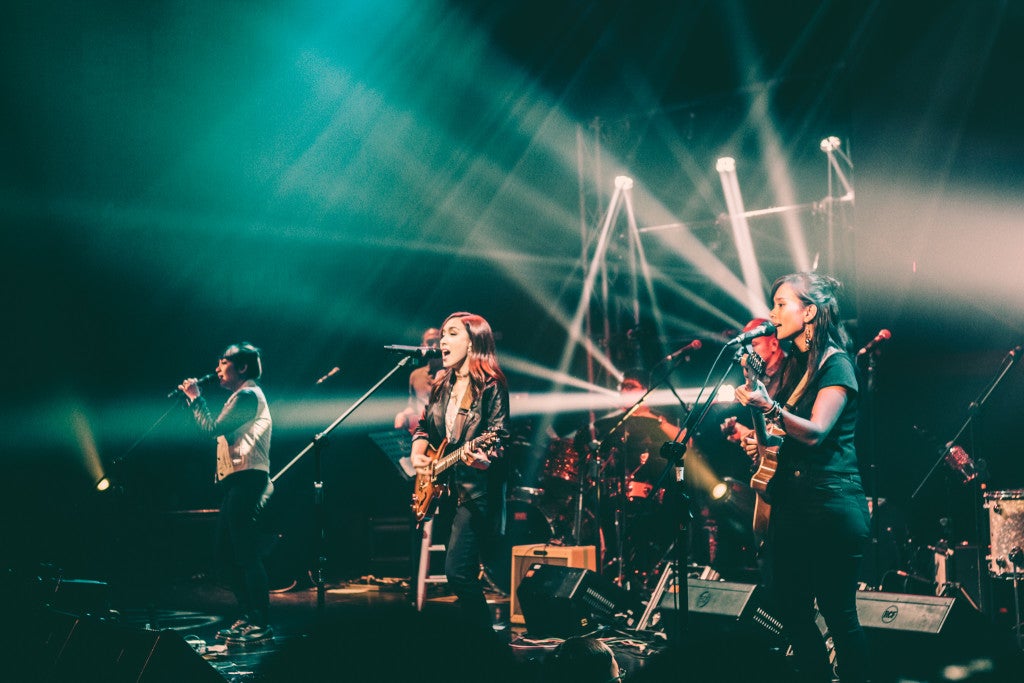 The sold-out Secrets concert held last December 10 at the Music Museum was a surprise success, earning gleaming praises from music critics and fans. Secrets also became a hot topic in social media, trending on Twitter Philippines during the entirety of its 3-hour run. 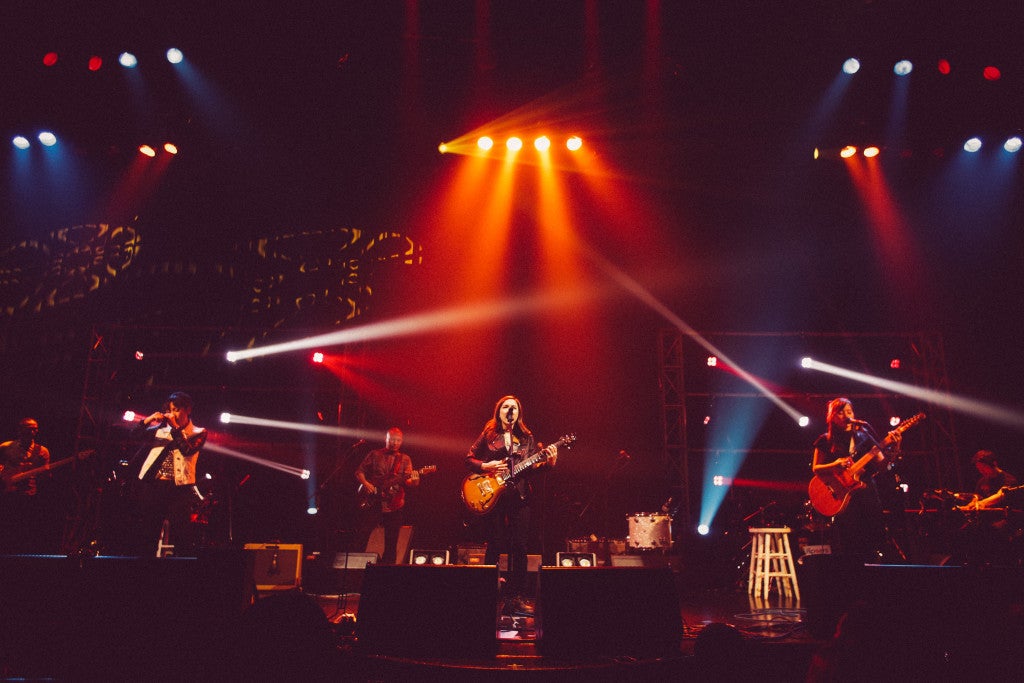 Aside from the solo performances, #AiaBarbieKitchie will team up for a collaborative number featuring an arsenal of beloved romantic anthems that fit the Valentine ’s Day canon.

Adding up to the excitement and fun is acclaimed singer-songwriter Ebe Dancel, who will be joining Secrets for a surprise number. 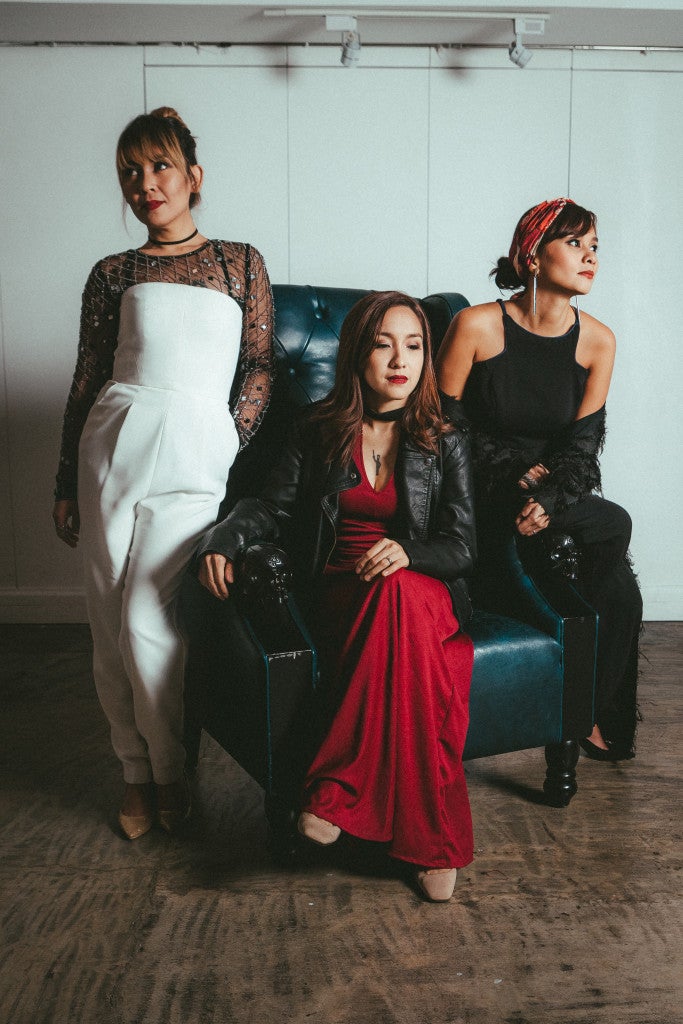 The concert will also give us a peek of the trio’s new material. Just recently, Aia de Leon debuted her new single “Sa’yo” on Spotify under Warner Music. The guitar-pop ballad offers stripped-down intimacy and endearingly earnest songwriting reminiscent of her previous hits “Tao Lang” and “Sundo”—the latter, a huge radio smash with her previous band, Imago. The track will be part of her upcoming debut solo effort to be released soon.

Kitchie Nadal also re-released her single “Wandering Stars,” which premiered at Jam 88.3 just recently. This time, Kitchie explores a different sonic approach that serves as a refreshing contrast to her pop-rock roots: Ethereal vocals over skittery electronic textures, with prominent drum n’ bass and trip-hop influences merged in the mix.

Not to be left out, Barbie Almalbis re-recorded her single “Secrets” with former Barbie’s Cradle bassist Rommel dela Cruz and producer-extraordinaire Angee Rozul. Her latest outing which premiered both at CNN Philippines and Jam 88.3, is a masterclass in pop songcraft, coming off as a swoon-worthy ode to motherhood—a recurring theme palpable in her recently released album, My New Heart.

The event is produced by Vandals On The Wall, an online music magazine and Gabi Na Naman Productions, an independent production outfit based in Manila, and is co-presented by Jam 88.3 and Petron. It’s the tandem’s fourth show, following their sold-out shows Damá and Damá: The Repeat featuring Ebe Dancel, Johnoy Danao, and Bullet Dumas, and the first Secrets concert.

For more updates on the upcoming concert, you may follow us on Facebook at http://facebook.com/aiabarbiekitchie. Tickets are available online via aiabarbiekitchie.com, or you may contact Music Museum at 721-6726 and reserve tickets through Gabi Na Naman Productions’ Leah at 0917-878-9803 using the link (bit.ly/AiaBarbieKitchie).