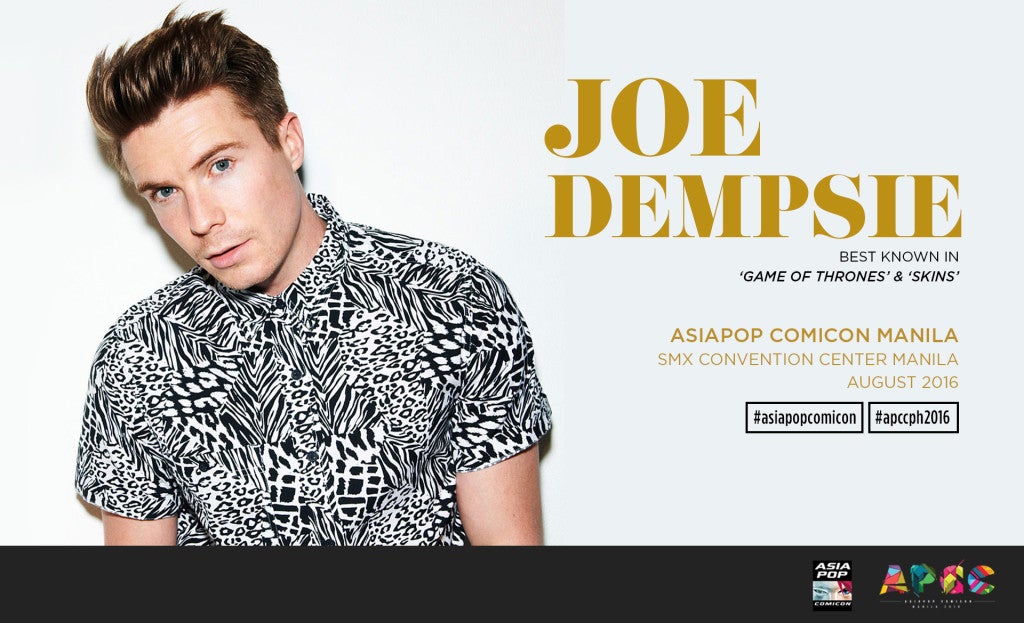 “Still rowin’?” But who would have thought that he would get here! Joe Dempsie aka Gendry of the HBO hit series Game of Thrones (GoT) is coming to town for AsiaPOP Comicon Manila 2016 (APCC Manila), the biggest pop culture convention slated on August 26 to 28 at the SMX Convention Center in Pasay City.

Other than his role in GoT, Joe Dempsie also starred in the Skins and various British television series such as Peak Practice, Doctors, Sweet Medicine, and The Fades, among others. He appeared in the films One for the Road, Heartlands, and Monsters: Dark Continent, to boot.

APCC Manila 2016 tickets are now available via SM Tickets with ticket prices PhP550 (one-day pass), PhP850 (two-day pass), and PhP1,050 (three-day pass). All these will give the ticketholder access to stage activities, performances, and the main show floor. The event is free for children aged five years and below for all days, but a valid identification is required for verification purposes before entering the show floor.

AsiaPOP Comicon (APCC) will be an international pop culture convention themed around comics, film, toys and collectibles, animation, games, cosplay, superheroes and everything pop culture. The event will attract several internationally renowned artists, celebrities and pop-culture icons to various pockets of Asia, starting with Manila in the Philippines, and draw the attention of ardent fans. APCC will feature exhibitors from genres of pop culture and top studios from the across the globe, to bring popular brands and exclusive content for the show.

Focusing on delivering the ultimate fan experience, APCC aspires to bring geek culture mainstream and stand tall as a perfect launch pad to unveil new products and first look of movies for the Asia Pacific region providing a galore of potential opportunities for SMEs in the entertainment business to reach out to big brands and the vibrant creative talent pool from APAC. While the event will serve as a mega licensing avenue for studios to establish a direct access to potential clients through B2B networking, the larger purpose of the event will remain the outreach and communication for celebrities and brands with their fans and engage with them on a one-on-one basis.

Universal Events & Entertainment (UEE), a subsidiary of Al Ahli Holding Group is a premier and dynamic international events management company, headquartered in Singapore committed to be the forefront of pop culture/comic con events globally. The passionate and dedicated team combined has over 4 decades of event management experience in the area of pop culture.

Universal Events & Entertainment prides itself in bringing world class celebrations of pop culture globally that delivers the ultimate fan experience whilst assisting brands to tap into the pulse of pop culture. We aim to build and engage communities and fans at our comic cons worldwide. UEE will kick off a series of comic cons events globally in Manila, UAE, Korea and USA in the near future. ADVT