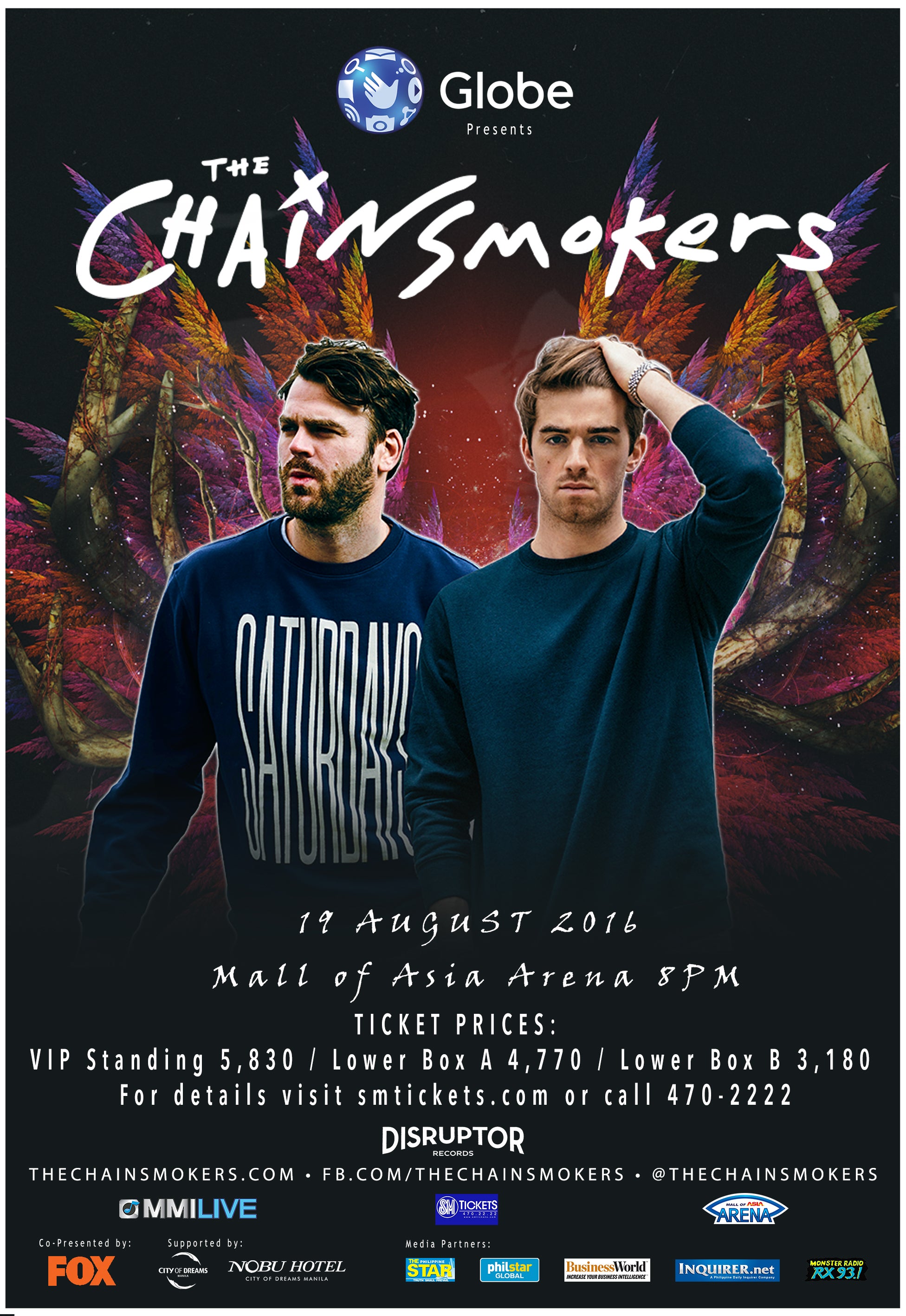 7 things you didn’t know about The Chainsmokers 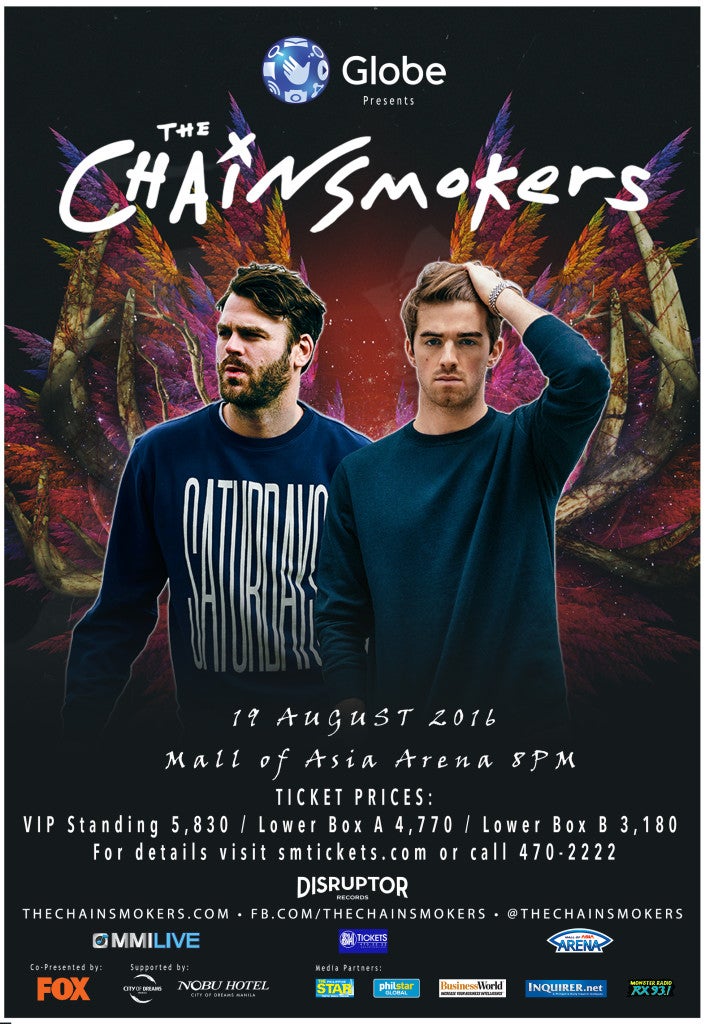 From ground-breaking performances, to their wild acts, and now a world tour running, these two gents have been storming each country with their addicting productions and this August, they are about to bring the party here to the Philippines! But before we see them live, here are a few trivial facts about a few of their tracks and how this duo came to be!

Before getting onto the stage, some artists have vocal warm ups and some sweat it out, but for this duo, it’s a different scenario. Imagine them having a few drinks (or a lot in a number of shows) before they turn the stage upside down, or punch each other in the face just to hype the party monsters in them. They also drown themselves with either steak or espressos to turn their bodies up for a massive and unforgettable moment upstage!

Their name didn’t actually have any historical background or any sentimental meaning for them. Their name “Chainsmokers” was used just because it sounded clever for them and the domains were open. No one could’ve imagined that it would get this big and awesome for them, right? I mean, 443,792,938 views just for one track? How awesome could they get! 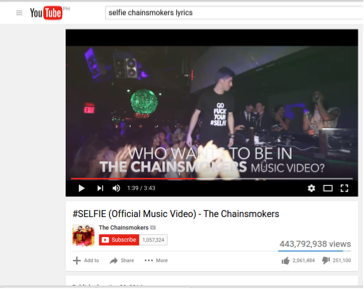 Before achieving the success they have now, The Chainsmokers used to upload their tracks in Soundcloud. It was a matter of expressing their musical passion and their intention to share it with the world.

They even collaborated with Priyanka Chopra back in 2012. In case you haven’t heard it yet, here you go!

Their biggest track of 2015, “Roses,” was the anthem of every gathering you could think of! But do you honestly and wholeheartedly know the lyrics of that song? Well here are some lyrics you’ve been mistakenly hearing (or singing in the shower perhaps):

Take it slow, but it’s not typical

He already knows my love is fine

His heart’s of stone, his hands roam

I told him to go, but he took it hard

Taking it slow, but it’s not typical

He already knows that my love is fire

His heart was a stone, but then his hands roamed

I turned him to gold and it took him higher

Before all the music, the parties, and the mixing, they were total strangers to each other. According to a telephone interview they had with Up to the Sun, they were just introduced to each other by a friend of a friend. Whaaat?! Who would’ve thought that these two would be selling thousands of copies after just sharing the same passion for music! In the same interview, it was mentioned that Drew was mostly into pop tracks and Alex was the one DJing in New York but after two months of mashing mixes, they found themselves doing more legit tracks together!

When they’re not in the music scene, what do these two actually do with their lives? You would think they’d be out partying, living the night, or just doing random things with their friends but nope, not at all. These two have a different side that we don’t usually get to see! Alex is actually a bookworm who loves to read novels, while Drew on the other hand loves video games, well “Call of Duty” to be exact. Well isn’t that a surprise!

These hitmakers do not pick and choose the kind of music they produce. As they say, a person born out of music produces the kind of music that inspires them. They have the passion for the art and this varies from different genres and music types. They wish to continue to evolve as performers and to be off inspiration as well to aspiring musicians. They continue with their mission which is to just mix what they think is fun!

A bonus fact about The Chainsmokers…

THEY ARE COMING TO MANILA THIS AUGUST 19 and Globe is giving you the awesome chance to win tickets to watch them LIVE at the MOA Concert Grounds!

Don’t let this duo down by joining Globe’s raffle giveaway to the hottest concert party this year! It’s as easy as taking a #Selfie! All you have to do is register to any GoSURF or GoSAKTO promo from June 20 to August 10 and get a chance to win VIP or Lower Box A tickets!

Register now and in one voice, let’s all party as Globe brings The Chainsmokers to Manila! Don’t miss out on this wonderful experience!

You’ll earn one (1) raffle entry for every P5 spent on GoSURF or GoSAKTO. If you win, you’ll get a text message with instructions on how to claim your tickets.

Registration is free of charge. ADVT. 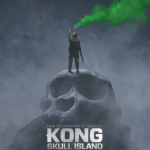 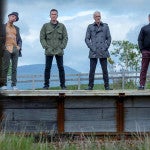