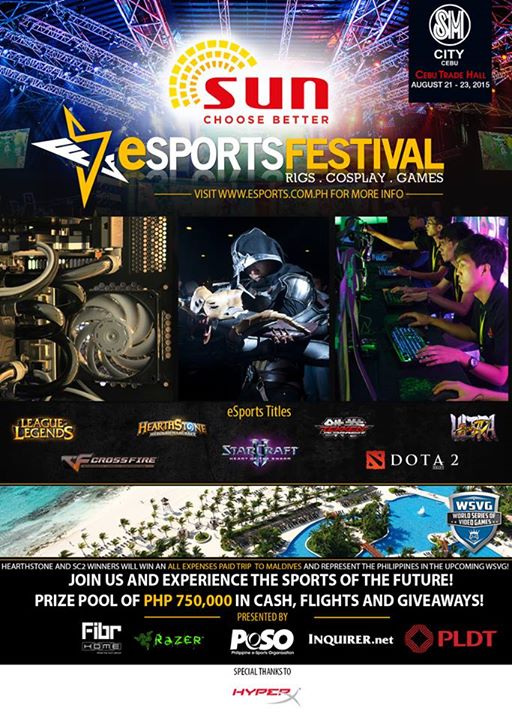 AUGUST 16, 2015, CEBU — The Philippine eSports Organization (PeSO), a group devoted to uplifting the status of gamers in the country, will once again bring to Cebu one of the largest gatherings of the country’s top competitors of Dota 2, League of Legends, Clash of Clans, Hearthstone, CrossFire, Starcraft II, Tekken 4 and Ultimate Street Fighter at the SM City Cebu Trade Hall this August 21 to 23, 2015.

With total prizes exceeding P750,000 for the various tournaments, competitions and giveaways throughout eSports Festival 2015’s three day affair, the stakes are higher than ever before. While being a spectacle in and of itself, eSports Festival 2015 will serve as an important staging ground for greater glory.

The event will serve as an open qualifier for the World Series of Video Games championships this October in the island destination of Maldives for Hearthstone and Starcraft 2. The World Series of Video Games is one of the biggest global e-Sports events that will be offering in this year’s edition more than $2 million US dollars in prizes and giveaways.

The event will also host the Visayas qualifying leg of the Philippine Clash 2015 Clash of Clans national tournament. Philippine Clash 2015, co-presented by Smart Communications, PeSO, SM Supermalls and
Cyberzone, is a landmark country tour for mobile-based gamers as it offers over P2 million in prizes.

In addition to the featured games, guests will be treated to costume play (cosplay) events, PC Rig showcases, gaming exhibits, and more.

“eSports is growing by leaps and bounds. Though it is still in its infancy. We are working hard to ensure it matures properly to reap the positive benefits it can bring to the country,” said Brian Lim Chairman of Philippine eSports Organization.

“eSports is akin to the early days of the I.T. industry in helping bridge the gap of the digital divide. For those that may be left behind in the analog world, eSports is a great medium to attract the next digital I.T. wizards of tomorrow.”

Those interested in tickets for the event may purchase them at SM Ticket Net. For more information like www.facebook.com/philesports or visit www.esports.inquirer.net.

This October, UP Mental Health Month 2020 takes the stage