On August 24, Spencer Elden filed a case to sue the rock band Nirvana.

A lot of people might not know his name, but they’ve most likely seen his face (or at least his baby face). One of Elden’s baby photos includes that of him submerged underwater and grabbing at a digitally imposed image of a bill on a hook.

Elden, now a 30-year-old artist living in Los Angeles County, is the model in the iconic album cover for Nirvana’s Nevermind. The album itself has become iconic as well, containing songs like Smells Like Teen Spirit, Lithium, and Come As You Are. 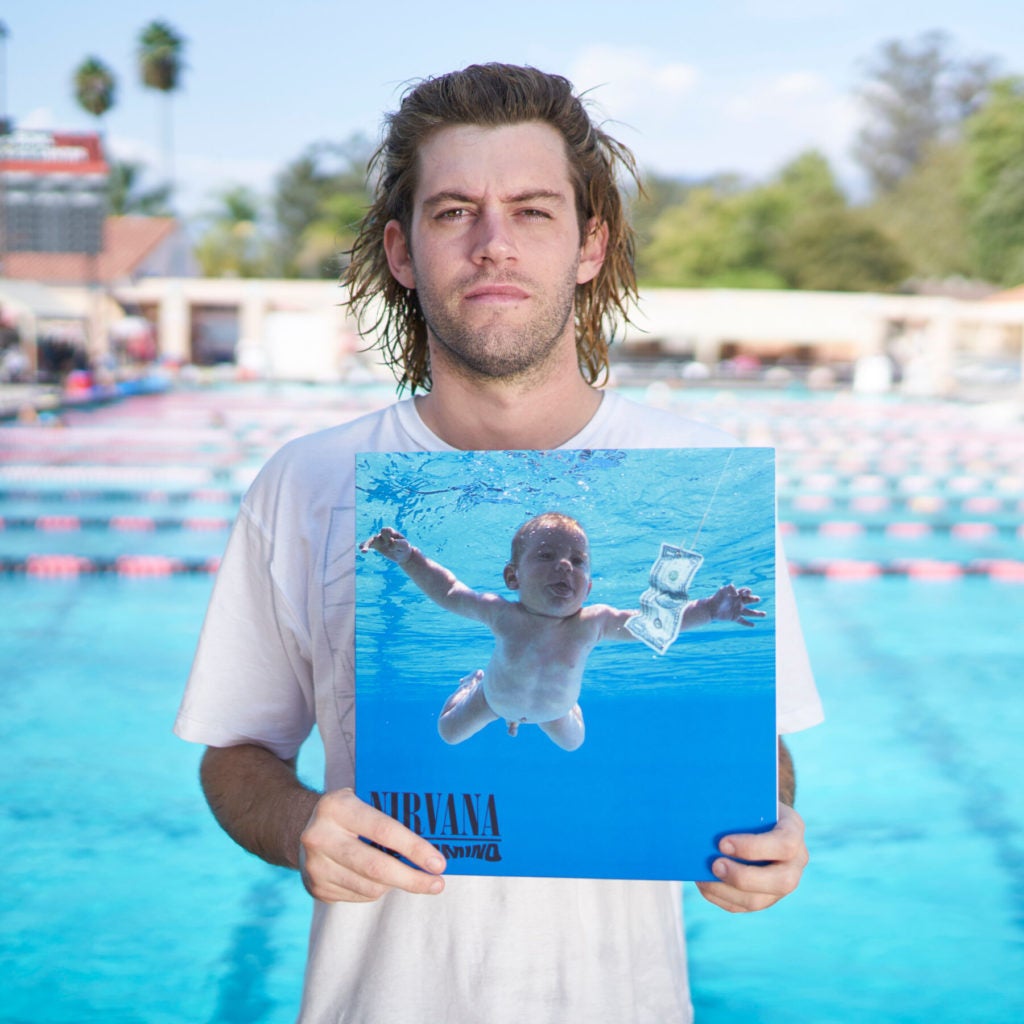 30 years after this photo was taken, the album and it’s cover photo becoming classics, Spencer Elden is suing the band on the grounds that the photo is an exhibition of child pornography.

The album has generally been known as a statement on capitalism, but Elden’s lawyer, Robert Y. Lewis, describes the image of Elden in that photo as “like a sex worker” as he reaches out for the bill while nude underwater. “Defendants intentionally commercially marketed Spencer’s child pornography,” states the lawsuit filed “and leveraged the shocking nature of his image to promote themselves and their music at his expense.”

The lawsuit describes the behind-the-scenes process of taking the Nevermind album photo. Photographer Kirk Weddle “activated Spencer’s ‘gag reflex’ before throwing him underwater in poses highlighting and emphasizing Spencer’s exposed genitalia.” Adding that “at least one or more film cartridges” were used throughout the photoshoot. Meaning that there are around 40 or 50 different photos of Elden.

Maggie Mabie, one of the attorneys handling Elden’s case, believes that the band was banking on “controversy sells” to sell their album. Relying on the shock value of the album cover to drive up sales.

Elden is working with the Marsh Law Firm, based in New York. The firm specializes in cases that revolve around the sexual exploitation of children, which may explain their persistence on the child pornography angle.

Michael Azerrad’s biography of the band Come as You Are: The Story of Nirvana describes the hesitancy that DGC, a former label under Geffen Records, expressed with the photo Cobain chose for the album. Cobain was persistent with keeping the photo unedited. The only compromise Cobain offered was to have a sticker covering Elden’s genitalia which would say “If you’re offended by this, you must be a closet pedophile”. As we now know today, the label decided to release the original photo.

Elden’s team hopes to strengthen their case by citing other examples of bands that have used explicit images of children on their album’s covers. Citing Scorpion’s Virgin Killer, Blind Faith’s Blind Faith, and Van Halen’s Balance.

The ultimate goal of Elden is to have the image redacted. According to Mabie, he is asking the band “to do what Nirvana should have done 30 years ago and redact the image of his genitalia from the album cover.” Additionally, Elden is also asking for $150,000 from the defendants. The list of which includes, Cobain’s estate, his widow Courtney Love, the band’s surviving members, Weddle and the art director of the shoot, and record labels that distributed the album. There have been no statements from any of the defendants, so far.

It is interesting to note that Elden is also suing Nirvana’s previous drummer Chad Channing who was succeeded by Dave Grohl before the album photo was taken or its songs recorded. According to Mabie, this is due to the belief that he still benefited from the sales of the album despite no longer being a part of the band at the time.

In the 30 years since the release of Nevermind, Elden has recreated the album’s cover photo for its 10th, 17th, 20th, and 25th anniversaries. Of course, in these photos he was wearing swimming trunks.

For the 25th anniversary in 2016, the last time that Elden recreated the photo, he mentioned his desire of doing the photo nude to truly recreate the album cover. He later decided against this. Elden also sports a tattoo of the album’s title on his chest.

In most of his interviews, Elden has always been on the fence about being that baby. During the album’s 25th anniversary Elden explained that “The anniversary means something to me,” he said that “It’s strange that I did this for five minutes when I was 4 months old and it became this really iconic image […] It’s cool but weird to be part of something so important that I don’t even remember.”

Elden has also described the intruding nature of his fame, “[When] I go to a baseball game and think about it: ‘Man, everybody at this baseball game has probably seen my little baby penis,’ I feel like I got part of my human rights revoked.”

His parents were only given $200 after the photoshoot. They also did not sign any form of contract or paperwork allowing the release of the photos, uninformed about its use until the family saw a poster for the album while driving down Sunset Boulevard.

Elden himself has not made any statements about the case. His team explains that they have been trying to shield him from the media as much as possible.

There is a lot of public opinion about this case. Some empathize with the Elden family’s lack of compensation considering how big the album came to be. Though, for most, labeling the photo as “child pornography” seems a bit much.

The case came as a surprise for all, many question the intentions of Elden in bringing this up only 30 years later. It also didn’t sit well with people that he is doing this after having recreated the photo multiple times in the past.

Why now? Mabie estimates that this case has been in the works for “over a year.” Further explaining that Elden still has the right to sue because the album and its cover are continuously being distributed to this day.

“Even as a child, Spencer expressed that this was uncomfortable, and he doesn’t like the way that this puts him in a place where he really can’t (protest) that it’s an invasion of his own privacy,” Mabie says “because people come to defend the band, as opposed to protect Spencer.” The team was aware of the notice that the case may get due to the fame of the defendants, although they were not certain to what extent this may be.

“Even though he recreated the images later on in his life, he was clothed, and he was an adult.” About Elden’s multiple recreation of the photo, Mabie counters by explaining that “these were very different circumstances.”

Professor Mary Graw Leary from the Columbus School of Law in the Catholic University of America, explains that “Mr. Elden’s past comments about the cover should not undermine his current claim that he was a victim of child pornography.”

She continues that “The law does not pick between children who immediately denounce their abusers and children who initially were dismissive about what happened to them.”

Mabie stresses that “It takes a very long time when you are a victim of these kinds of image abuse crimes to really understand how you’ve been damaged.” She believes that there is no one who can understand how Elden feels right now other than Elden himself.