The Lasallian Scholars Society (LSS) will be holding Scholars’ Week, its flagship event celebrating the scholars of De La Salle University, this April 23 to 30.

This annual event aims to shine the spotlight on the university’s best and brightest students and features engaging activities for the whole Lasallian community to enjoy. This year’s theme is based on the famous Studio Ghibli films, with LSS aiming to capture the same childlike wonder in their upcoming celebration.

Now in its second year of going virtual, LSS hopes that the remote setup will allow more students to come and join the festivities. Sophia Angela Jimenez, president of LSS says, “For Scholars’ Week this year, LSS forged partnerships with numerous established external companies. With this, Scholars and everyone else, Lasallian or not, who wish to celebrate the entire Lasallian Scholar community with us should watch out for exciting prizes, distinguished speakers, and remarkable talents when they join the virtual games, webinars, contests, and assemblies we will be hosting daily. We definitely can’t wait to share this momentous week with you!” 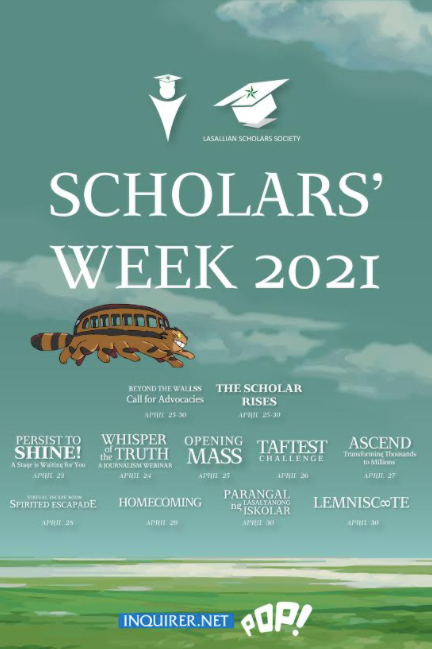 Scholars’ Week will be kicked off by Persist to Shine on April 23, an open mic event, followed by a journalism webinar called the Whisper of Truth on April 24. It will also include Taftest Challenge, LSS’ most awaited quiz bee, which will be held on April 26. Beyond the WalLSS: Call for Advocacies, an initiative started by the organization which features different advocacies from all over the country, and The Scholar Rises, showcasing the dazzling talents of scholars, will both commence on April 25. This will be followed by ASCEND: Transforming Thousands to Millions, a financial literacy webinar, on April 27. The week will also feature a virtual escape room called Spirited Escapade on April 28. This is followed by a special video event featuring alumni scholars called Homecoming on April 29. Finally, the celebration will culminate in the second general assembly of the organization called Lemniscate on April 30, which will also honor the winners of Parangal ng Lasalyanong Iskolar.