When it comes to children’s books, acclaimed author Augie Rivera is not one to shy away from topics adults might consider taboo for kids.

Rivera credits his time in educational kids’ show “Batibot,” where he would become head writer during the 1990s, for his “newfound respect for children as an audience.”

“I realized then that any topic is possible to discuss to young children — as long as you do your homework well,” he told INQUIRER.net of how he presents sensitive issues to kids.

In fact, he drew from his experience in “Batibot” for his latest book, “Ang Katawan Ko at Ako,” by including a song that teaches children about body safety and how to protect themselves from abuse.

The song repeats the words “Hindi! Tigil! Ayoko!” to remind kids that they can say no when it comes to their bodies.

Consuelo Foundation, which commissioned the book, released on Sept. 29 an animated video of the story featuring the catchy and cheerful melody that could easily fit into a children’s TV show. Copies of the book are available through the foundation.

Though he knows his books are a “springboard for discussion,” Rivera advises adults to only discuss these topics with kids if they feel ready to do so, and to “expect the unexpected” when it comes to kids’ questions.

“My approach to such [topics] would be to tackle it head-on, not to sugarcoat grim realities as this might only confuse the kids even more, and messages might also get lost along the way,” he said.

Even with the accolades, Rivera has yet to rest his pen for the Filipino child. His next book, which is about online sexual exploitation of children, is already under production with Lampara Books.

Meanwhile, “Ang Lihim ni Lea” has been adapted into a short film starring Eugene Domingo and is scooping international awards. While it has yet to get a local screening, the book has also been adapted into a contemporary dance piece and his wife, Mike Rivera, has made it into a one-act musical play.

Twenty-five years after the publication of his first book, “Alamat ng Ampalaya,” Rivera spoke with INQUIRER.net about his own experience of childhood and why adults should not underestimate children, even when it comes to telling painful truths.

What was the hardest thing you had to deal with or learn while growing up?

Shyness. I was painfully shy as a kid, not very sociable, and had very few friends. I was a nerd who devoured Filipino komiks. I had very few books at home though, so I had to dodge tennis balls just to hang out at the Malabon public library (the library was beside a tennis court!) where I read various books on history, science, bugtong, Liwayway and MAD magazines.

What is your happiest memory of childhood?

Happiness was catching kataba (mosquito fish), [gourami], and other strange fish in the flooded streets of Malabon, and also swimming in knee-deep baha (floods) inside our house. Well, that was until I was old enough to be assigned the tedious chore of bailing water out of our house (paglilimas) using [a] plastic dust pan.

In what way do you think adults tend to underestimate kids?

When we bombard children with too much moralistic content… when we always want to spoonfeed them… when we condescend and talk down to them and not give them credit that they [are] capable of understanding… when we don’t trust that they can think on their own.

If you weren’t a writer, what would you be doing?

Probably, I would be doing behind-the-scene work, as I also have a background in various aspects of production (theater, TV, live events, etc.). Or I would be a dog walker.

What is the best feedback from a child that you’ve received for a book you wrote?

Perhaps the most heartwarming feedback was an email that I got from a teenage girl, a [University of the Philipines] student, about five years ago who thanked me for writing “Ang Lihim ni Lea.”

(The following is an excerpt from the letter.)

“Thank you, sir, for helping me with my recovery. ‘Ang Lihim ni Lea’ made me realize that these things really do happen and I shouldn’t be afraid to speak out.”

“This book made me brave enough to see a psychologist, like Lea did. I just wanted you to know that you helped heal at least one person in this world by merely writing about something everybody is terrified to talk about. I could only imagine the effect this story has [on] children who did go through sexual abuse.”

What is something you’ve done as a kid that got you into trouble?

In public elementary [school], for being “madaldal” (talkative) in class, I was made to kneel down, arms outstretched, balancing a U.S.-donated hardbound textbook on both palms. (At least I wasn’t made to face the wall and talk to Marcos’s face on the calendar!)

Who are the people you’ve always admired as a kid and still look up to now that you’re already grown up?

My parents. They may be flawed but who needs a perfect hero? And I’m very thankful that they’ve allowed me to forge my own path.

How do you think your stories help kids in learning about the realities of the world around them?

The world ain’t all sunshine and rainbow-colored unicorns. Whether we like it or not, some children live under difficult circumstances and we need to hear their stories, too, and represent their experiences in the content that we produce for children.

When we present these social realities in our content, we empower and give hope to children who may be experiencing similar situations first-hand, and at the same time, we also teach empathy to those lucky enough not to be in such difficult situations.

When we expose children to different experiences that are very far from their own, we broaden their perspective, we help them understand, and we promote awareness and acceptance. We encourage them to become critical and ask about complex issues, and we make them care enough to dream, aspire and participate in creating a better world for them to live in.

What would you say to a child who has been parted from his/her friends, playmates and schoolmates because of the pandemic and misses them so much?

I would sing to him a song that I wrote for the preschool show, “Batang Bibbo” (which aired on GMA in 2008 to 2009). It’s called “Paglisan ng Kaibigan” and it’s about how a child learns how to deal with change and cope with being separated from a friend who’s moving away to live in a [faraway] place. I know it’s a different situation to be in but I think the message would still resonate with him. It had (these) lyrics:

What has kept you going during the pandemic?

At the height of the pandemic, I got word from UMPIL that I would be awarded the Gawad Pambansang Alagad ni Balagtas for Children’s Literature this year. It’s a national lifetime achievement award given to outstanding Filipino writers who have produced a meritorious body of work in their chosen genre or field of expertise.

The award is both an inspiration and a new challenge for me to create, be more productive, even in these trying times, and to continue writing content, in any way possible, for my chosen target audience — the Filipino children. JB 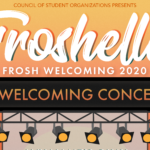 An indoor getaway: Froshella, a virtual concert to remember 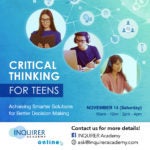 Why it’s important for teenagers to develop critical thinking skills