The American horror master has announced that his latest crime novel, “Later”, will arrive in bookstores across the world in March 2021.

The release will be overseen by Titan Books imprint Hard Case Crime, which specializes in pulp-style crime novels and has published King’s previous novels “The Colorado Kid” and “Joyland”. 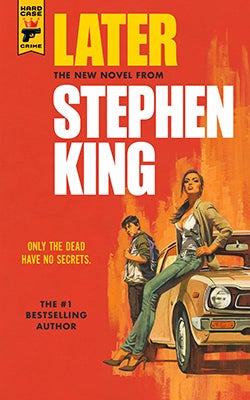 “Later” will tell the story of Jamie Conklin, as he uses his unnatural abilities to pursue “a killer who has threatened to strike from beyond the grave” with the help of his mother’s detective lover.

“I love the Hard Case format, and this story — combining a boy who sees beyond our world and strong elements of crime and suspense — seemed a perfect fit,” King said in a statement.

“‘Later’ is a beautiful story about growing up and facing your demons — whether they’re metaphorical or (as sometimes happens when you’re in a Stephen King novel) the real thing,” Charles Ardai, the editor of Hard Case Crime, added.

Like Stephen King’s previous books for Hard Case Crime, “Later” will be published initially as a paperback original with an original cover painting by Paul Mann.

This edition will then be followed by a limited-edition hardcover that will feature two new cover paintings by award-winning artist Gregory Manchess, one for “Later” itself and one for a fictitious novel within the novel that features prominently in the plot.

While “Later” is already available for pre-order, Hard Case Crime has also announced that an ebook edition of the crime novel will also arrive. CL

After conquering the big screen, Hollywood stars are taking over audiobooks